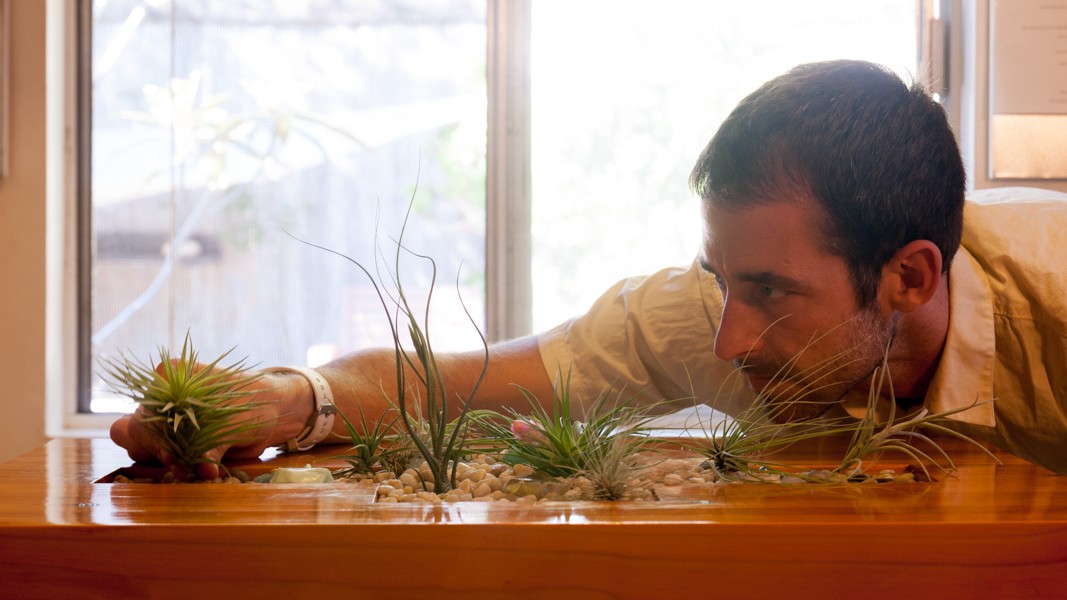 04 Nov The Unbearable Lightness of Being (an Air Plant)

We entered into our air plant relationship with a bunch of misconceptions. They’re generally misunderstood; the mythology goes: they’re easy (how difficult can they be — they’re like the breatharians of the plant world), they’re bland, flowerless, overpriced novelties at Home Depot. Alternatively, it’s easy to mistake them for parasites from another planet that siphon essentials from taller, nobler plants. 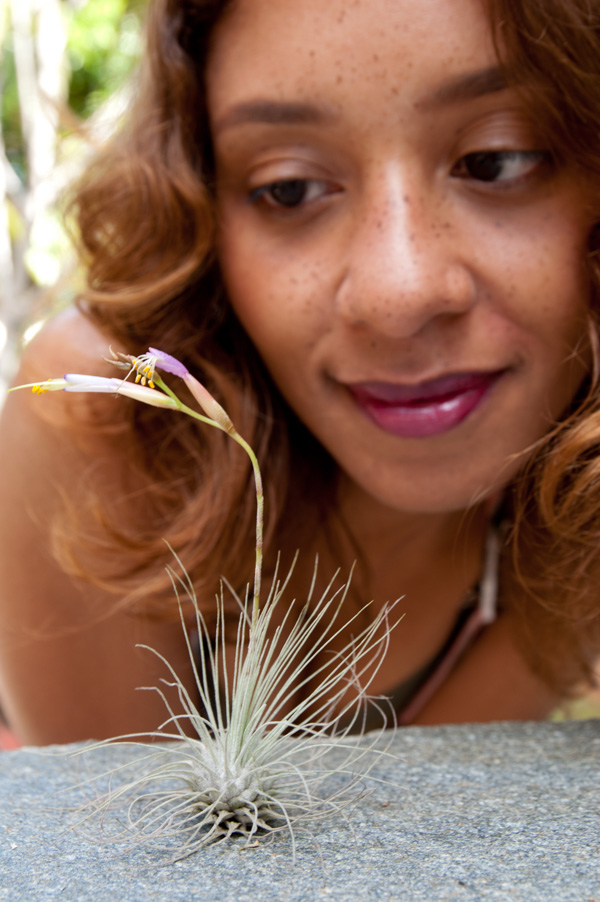 The truth is, tillandsia are fiendishly self-reliant and native to the Americas. One might discover this epiphyte hooked on a tree branch while hiking the desert, forest or mountains of Central and South America. They pull their water out of the air and into their leaves; humidity is important, but a good soaking is key.  Their flowers are papery little firecrackers. Airplants are monocarpic, meaning they flower once and die, but not before likely delivering a litter of  ‘pups.’ (Your landlord’s pet policy be damned.) Oh, and about them being low-maintenance? They drop dead if you look at them the wrong way.

We learned the latter truth the hard way. It took a few shipments from Airplant Paradise on Ebay  before we were able to do right by our tillies. In the grab-bags we order, plant textures range from waxy (T. bulbosa) to sewing thread (Tillandsia argentea) to powdery-soft like crushed velvet, in the case of T. caput-medusae, which is actually covered in tiny gray hairs and should shoot out a red inflorescence if we’re lucky. It’s a curly one, too (“medusae,” geddit? geddit?), with leaves that wind every which way. 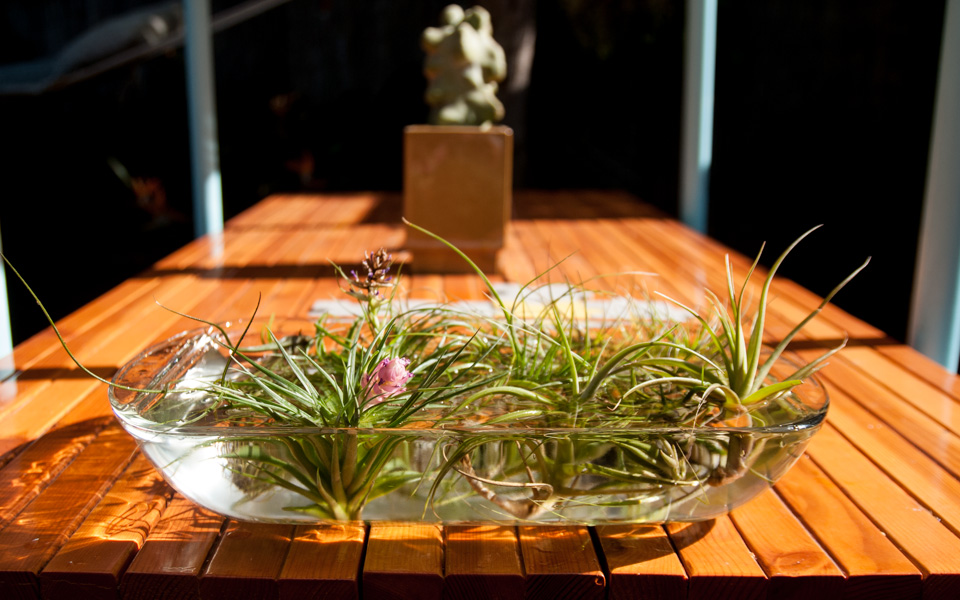 We soak on Saturdays 10am to noon, flowers up, then dry completely noon-4pm.

They tread weekly in a large casserole dish of (regular, not distilled!) water for a couple hours with flower heads above water level— preferably in the a.m. — then we spread them out to dry outdoors in the sun on a newspaper. They do enjoy a nice breeze to help dry completely.  We prune monthly by pulling back grayed leaves from the base. We have struggled to keep our aerophytes longer than six months before ordering the next round — probably due to lower humidity level in SoCal. Wethinks we should start soaking them twice a week… 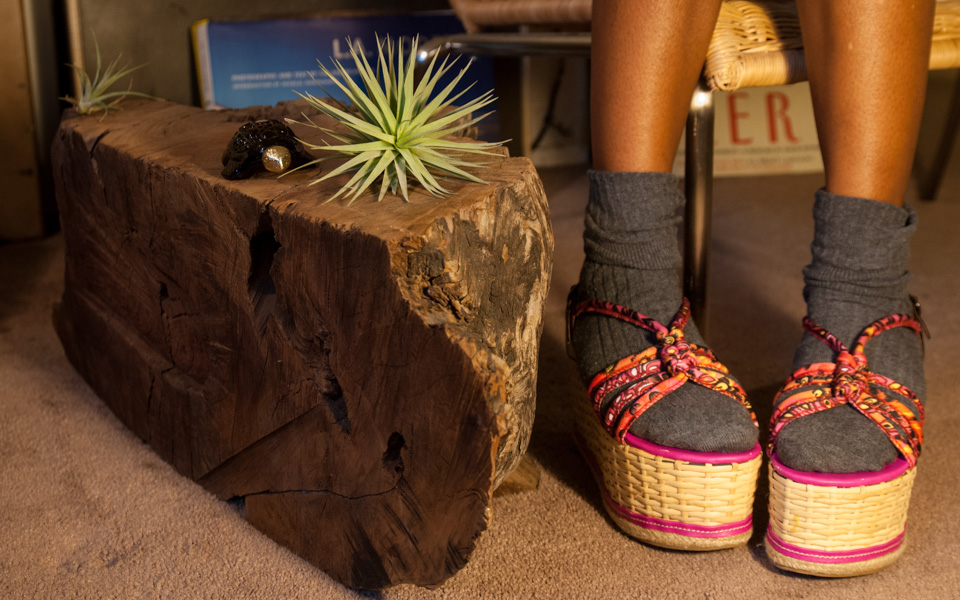 We soak on Saturdays 10am to noon, flowers up, then dry completely noon-4pm.

At the moment, though, they’re looking pretty spectacular against redwood and next to a vintage turtle-shaped bottle of Avon perfume and C’s new flatforms (above). We also rely on tillandsia, a member of the bromeliad family, to put the “living” in RB’s indoor living tables (below), especially when mingled with a Día de los Muertos skull and hunky, sparkling geodes. The ones in flower need more sun, so we position them accordingly. 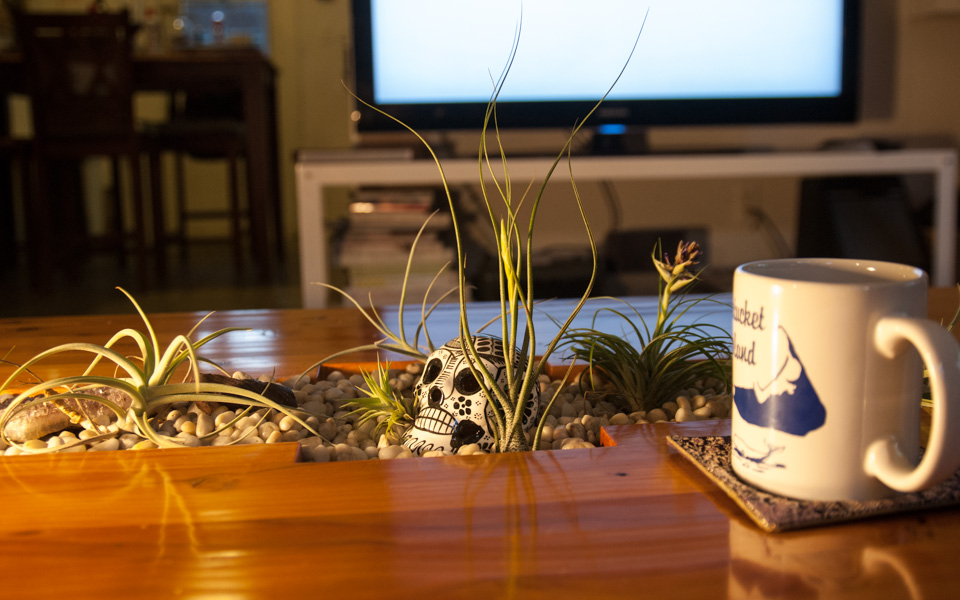