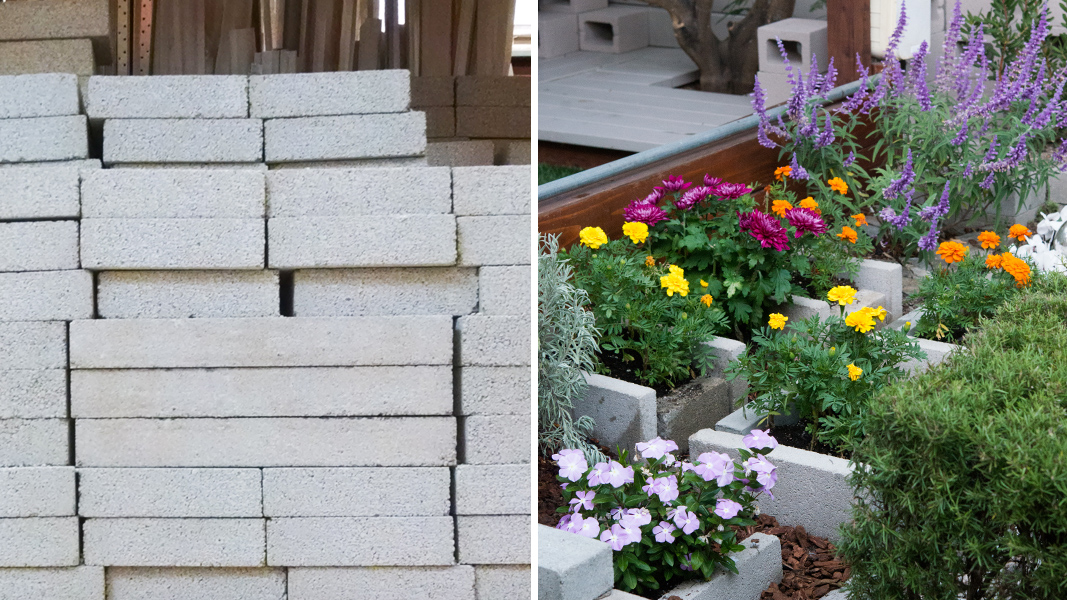 22 Oct Block Party: How to Make Quick and Easy Raised Beds for Your Garden

Earlier this month we decided to redo our flower beds/“stadium garden,” where we normally rotate blooming annuals and perennials. After storing the tuber of our Impatiens flanaganae, which enjoyed a powerful summer bloom, and saying goodbye to our last dahlias, we realized our garden bed could use a good lift — literally and figuratively — for the new fall season.

So we did some fall plant shopping at our local nurseries. We brought home a Mexican bush sage (Salvia leucanthus), four six-packs of marigolds, six cyclamens and a vinca plant. Anticipating that the marigolds and vinca would be low-lying bloomers, probably topping off at 12 to 18 inches, this gave us motivation to raise their beds to new heights. 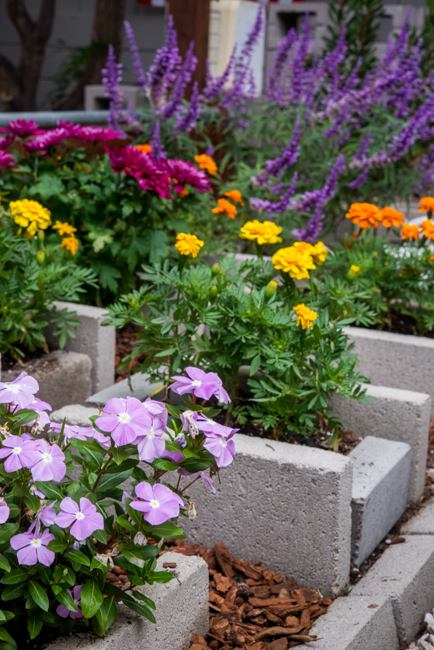 Our purple vinca flowers and yellow and orange marigolds are sitting pretty in their new raised beds.

Except…we didn’t want to raise our bed permanently. And we didn’t want to take on a labor-intensive or expensive project. The solution? Ten bricks and ten cap blocks from the hardware store, plus some potting soil. Cap blocks are normally mortared along the top of cinder block retainer walls. And just like cinder blocks, we think they can provide great structure to a garden and can be used, when stacked, as side tables, seats, pavers, or as we demonstrate here: borders for raised-bed gardening.

Rather than one large raised bed, we made a series of smaller ones, modestly elevated at three to four inches. The project took us a grand total of about two hours and gave our stadium garden a completely new look. We like this project because it’s quick, inexpensive and isn’t permanent. That said, we think these bright, stark blocks will be sticking around for a while.

The cap blocks will be half-buried and serve as soil retainers for your new raised beds. Imagine and count how many blocks you’ll need to raise your new crop of plants. Each pair of blocks will be spaced 12 inches apart. 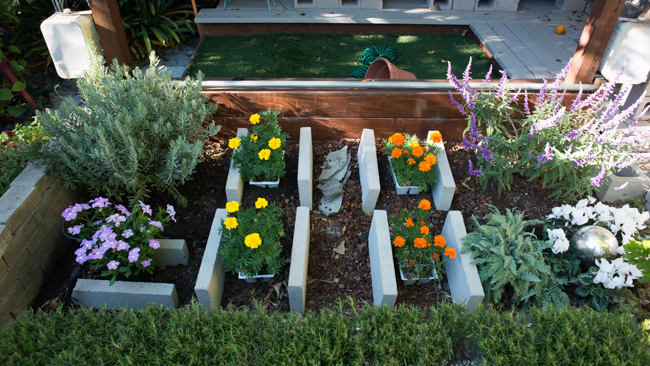 Calculate how many beds you can make at 12 inches apart. We chose to install five beds, but we could have easily created two additional beds in the middle.

2. Gather your blocks…and your bricks.

Find the blocks and bricks at your local hardware/construction supply store (e.g. Home Depot or Lowe’s), where you’ll find them in the masonry section, and usually adjacent to the cinder blocks. The blocks range from $0.80 to $1.04 each, and the bricks cost less than $0.30, so, go crazy! And make sure to pick up a few extra just in case. 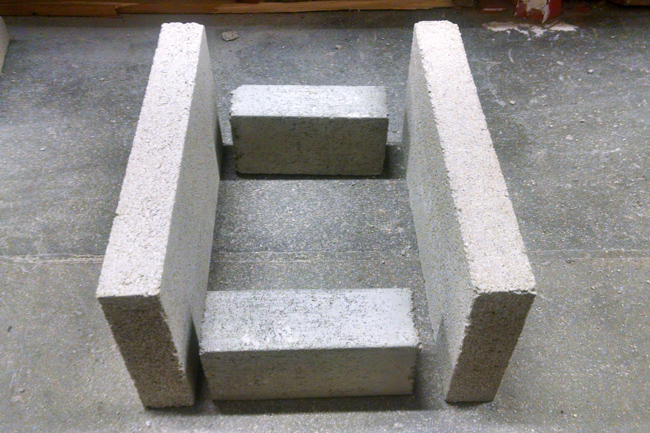 This is how the blocks will be arranged for each raised bed. The cap blocks (left and right) will be buried about halfway and the small bricks (top and bottom) are placed at each end. 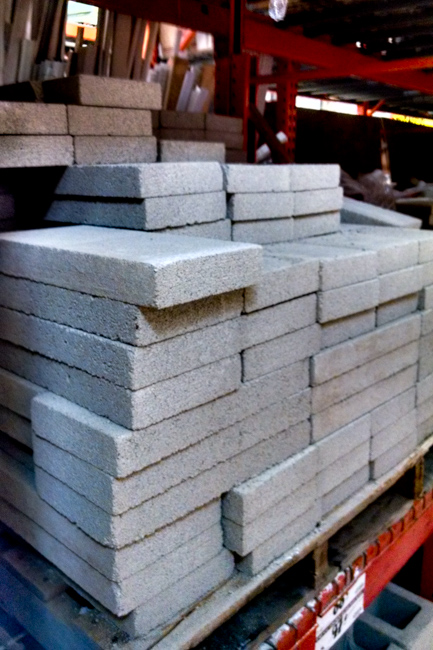 We found cap blocks for 88 cents each at Home Depot. 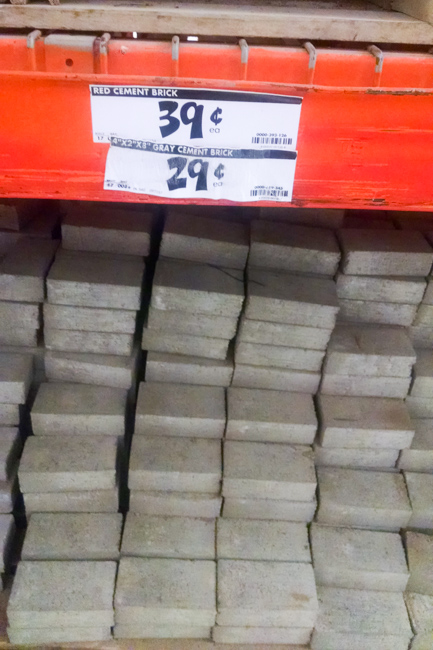 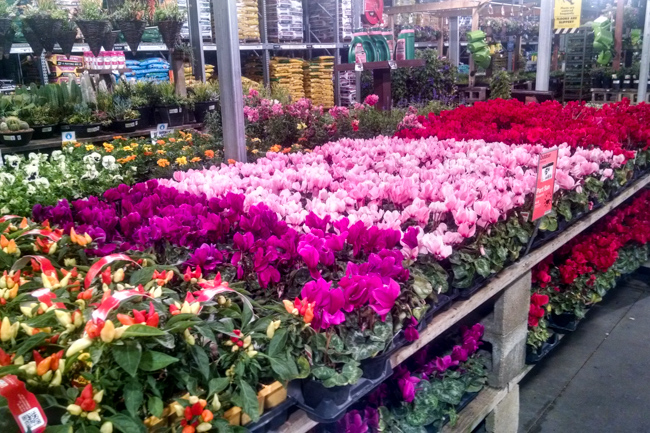 Don’t forget the flowers! We’ve noticed this time of year that most of the available plants are low-bloomers such cyclamen, pansies, mums, marigolds and snapdragons. All the more reason to give them a lift!

3. Arrange the blocks along with plants on top of soil.

Space out the cap blocks 12 inches apart center to center (or 10 inches between the inside faces) across your garden bed. Place your plants to envision the final arrangement. 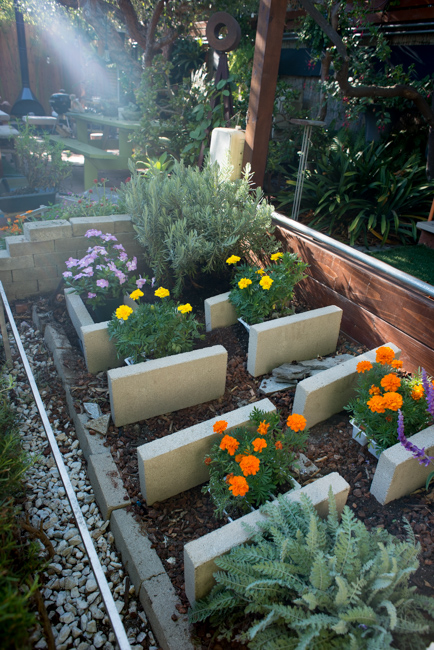 4. Dig in and level the blocks.

Starting at one end of the row of beds, loosely bury the first block about halfway (approximately 3 to 4 inches deep). That’s enough to keep it stable as a border for dirt on one side.

Make sure the first block is perpendicular to the row and is level along the top edge. Set the block by firmly packing soil around it. This block will serve as a reference for the rest of the blocks in the row.

Using a hand trowel or shovel, dig in the second block 12 inches away, as measured from center-to-center. (Again, 10 inches between the inside faces.) Bury the other blocks level with adjacent block. Continue down the row making sure that all are level and equally spaced. 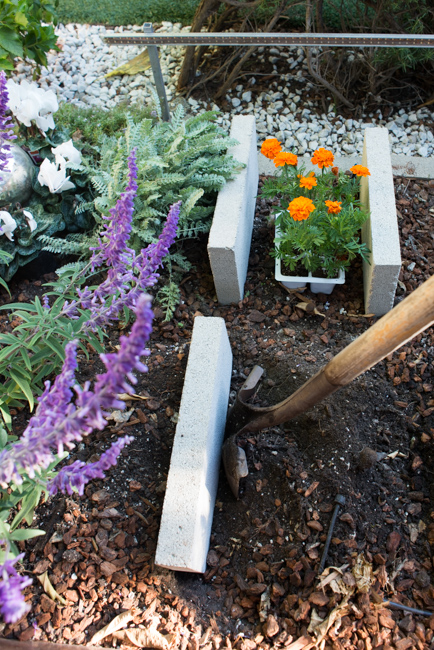 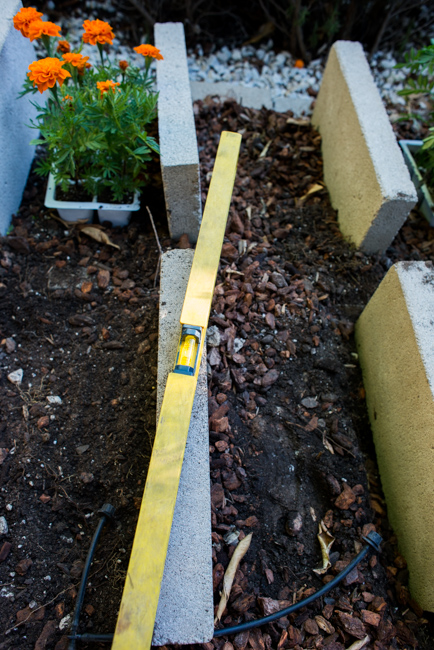 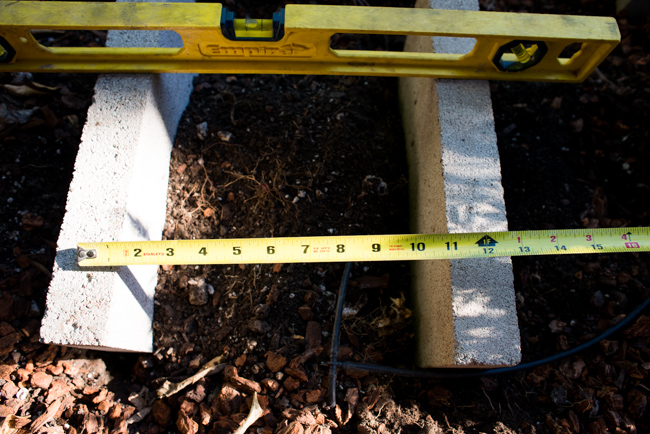 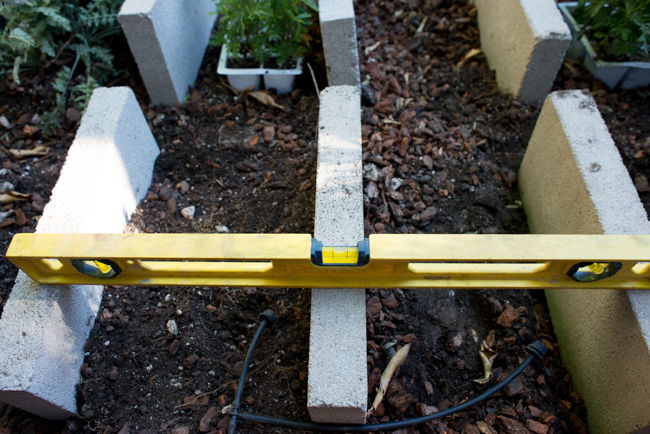 Loosen up the underlying soil and work in a mound of new potting soil. We like to use straight organic potting soil in our garden beds. We’ll also use the potting mix as an amendment to the existing soil.

Loosen up the rootballs and set the plants.

Add the brick ends and even out the soil. After setting the last brick, water thoroughly. 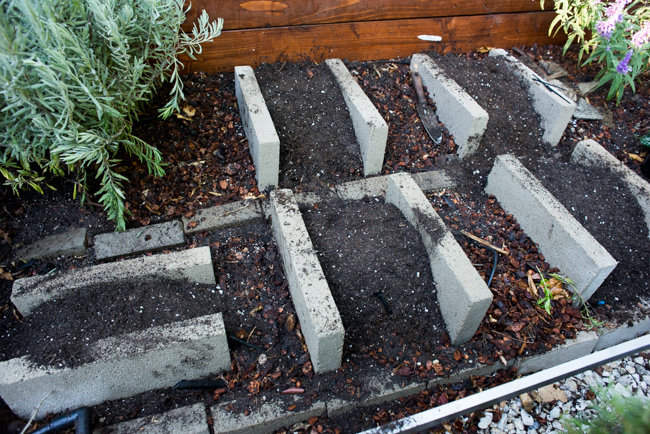 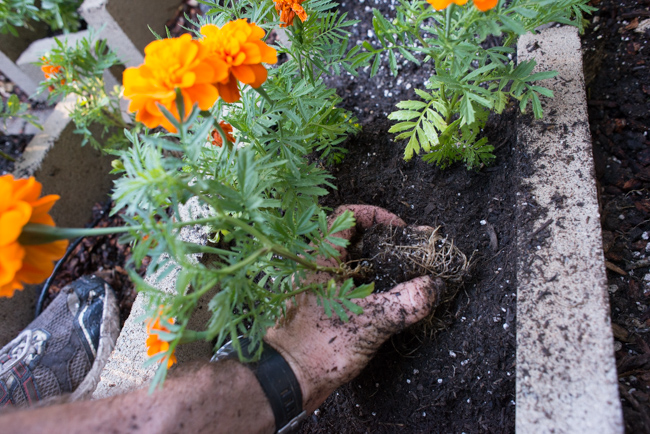 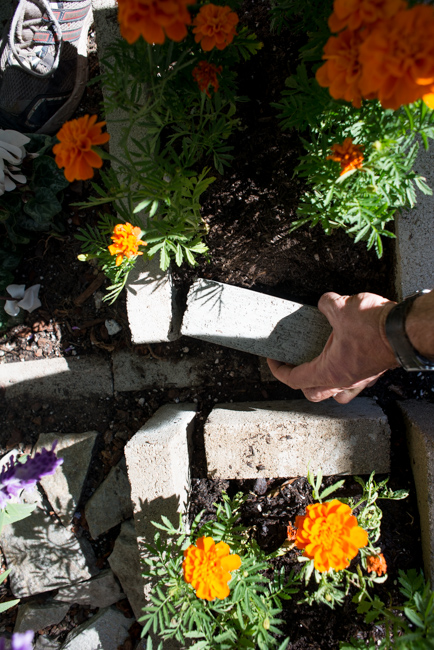 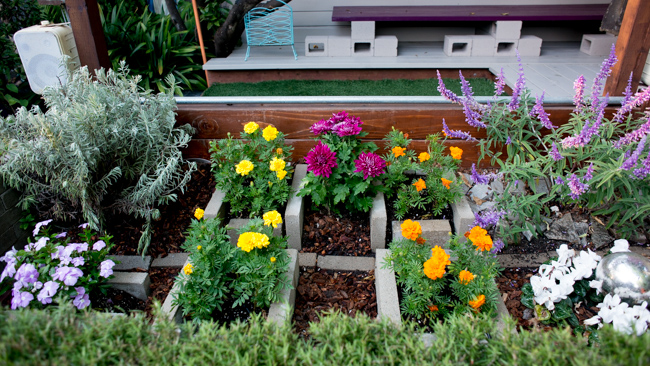 The finished arrangement. (We added a taller mum in a section that isn’t raised.) 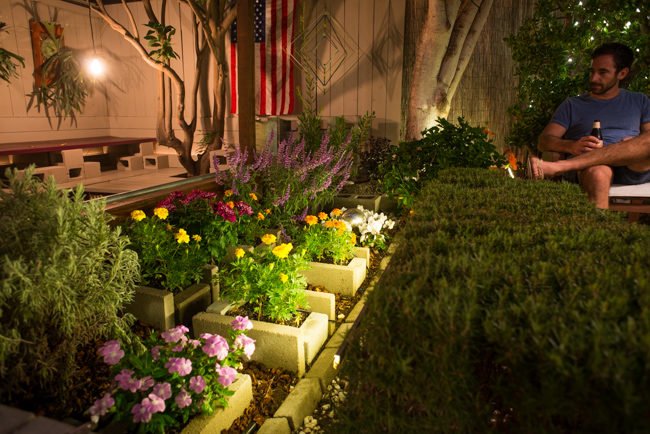 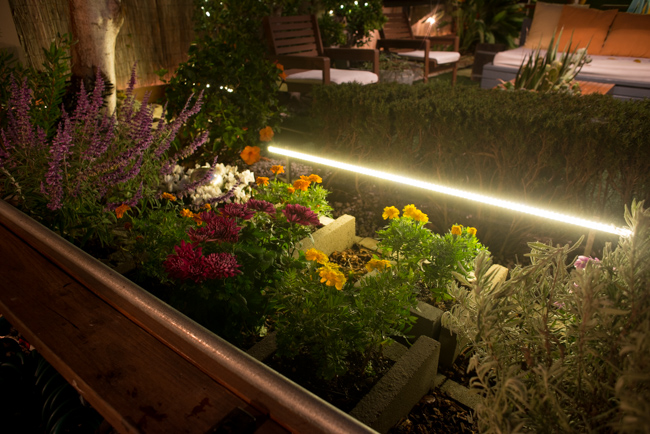 (Hence why we call it our ‘stadium garden.’) 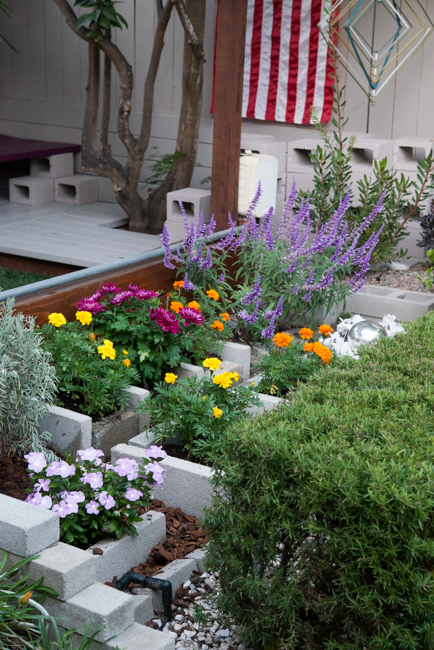