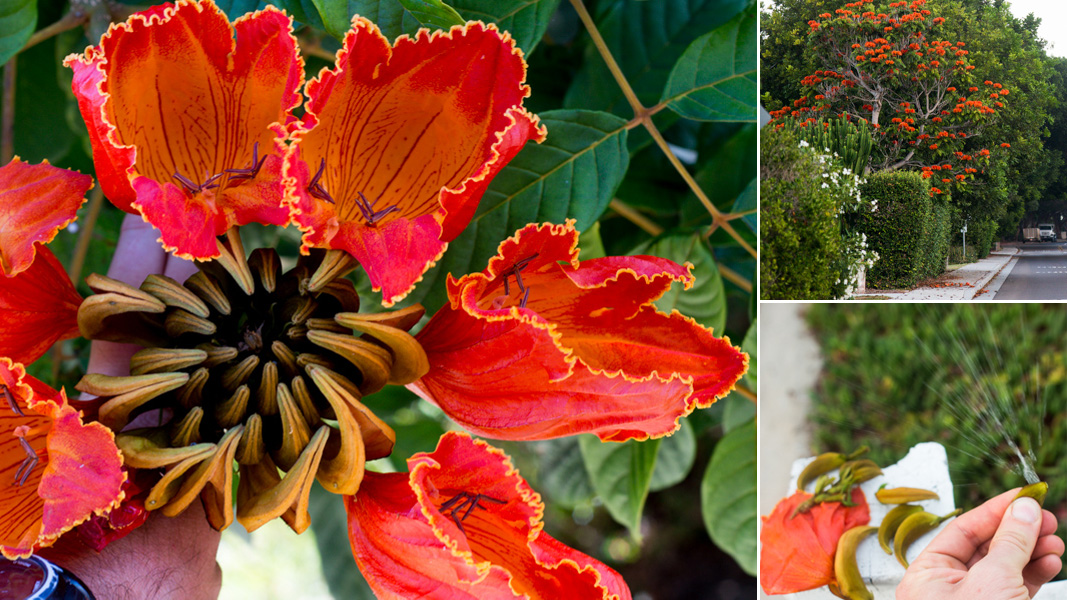 Now that the weird clouds of August have cleared and Southern California’s newsworthy chill has been replaced by Louisiana levels of humidity and temps in the 90s, summer’s only just getting started here in our beachy little burg. We can’t think of a better emblem for a late-blooming heat than the red-flowering tree we encountered last weekend.

Around Labor Day we were walking our usual route to the beach when we saw its upright clusters of large tropical flowers jutting from the top of someone’s yard, scarlet torches against the blue-ribbon sky. Turns out it’s an African tulip tree — and like a fancy new word, now that we know it, suddenly we’re seeing it everywhere. We easily found four within a half-mile radius of our house. There’s also mini orchard of them where the I-5 freeway meets the I-8. Although it’s not nearly as widespread in this area as the jacarandas of late spring or the gold medallion trees of early summer, this tropical tree has carved out a showy presence here in Southern California, from the “Gorilla Tropics” at the San Diego Zoo to the north side of Venice Boulevard in Los Angeles, just west of Barrington. 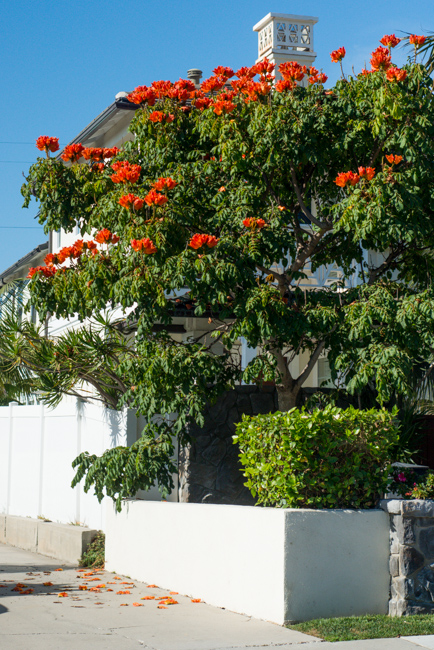 This tulip tree, or nandi flame, sparked our interest on Bonair Street in La Jolla, California. 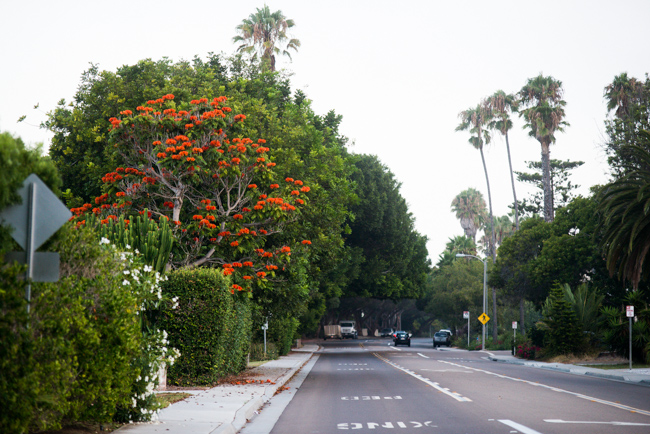 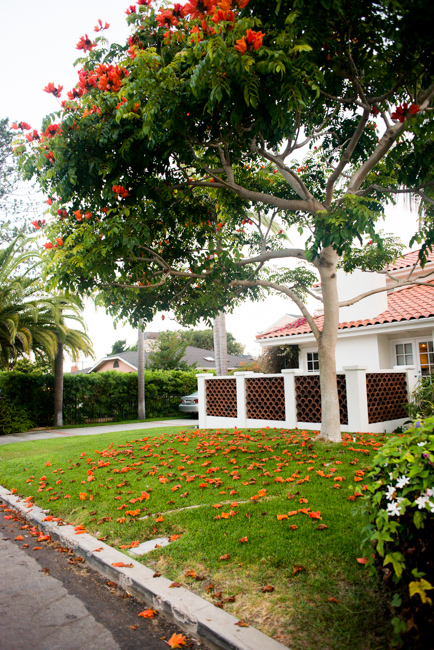 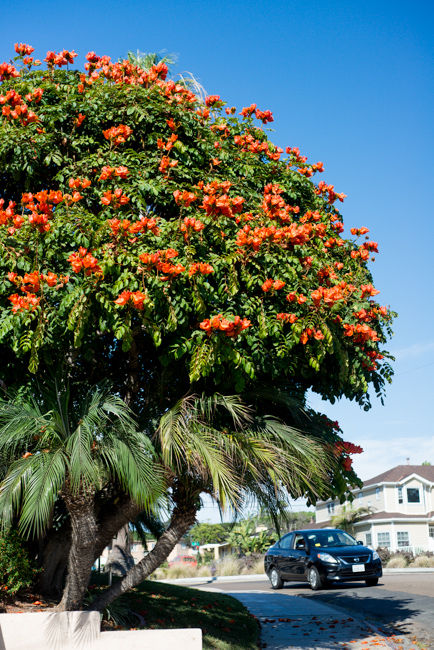 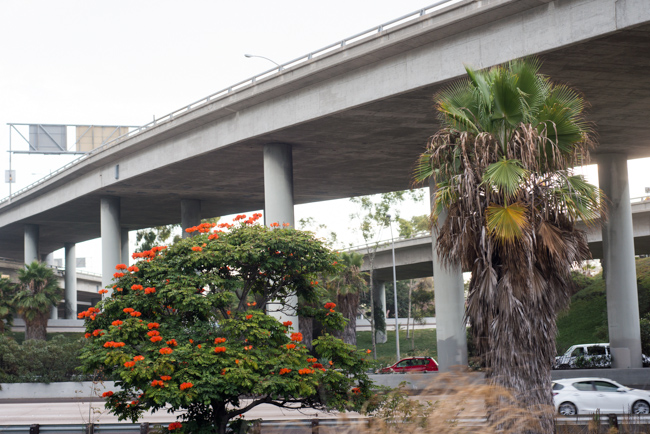 We spotted three trees where the I-5 meets I-8. Pictured above is the tree we spotted from the 5 South ramp heading off the 8 East.

Spathodea campanulata is native to a wide region (Angola, Ghana, Kenya, Uganda…) of Sub-Saharan Africa, and is considered extremely invasive in the tropics; in Hawaii it grows by the wayside like a weed. The tree, also known as a fountain tree or a nandi flame (who can resist a name like nandi flame?), can reach up to 75 feet tall, and will become deciduous if grown outside of its tropical comfort zone. Branches are brittle and leaves are pinnately compound, bearing 11 or so glossy leaflets, and the tree is easily victimized by wind and frost.

About those flowers. The African tulip tree gets its name from its showy, cup-shaped blooms that resemble tulips; petals are usually orange-red with a stripe of yellow running along the crinkled margins of its petals. (Some rare cultivars grow all-yellow flowers.) The flowers bloom in clusters surrounding even more clusters of fuzzy claw-shaped buds that are filled with liquid. True to its “squirt tree” nickname, the buds are used as water guns in certain parts of the world. 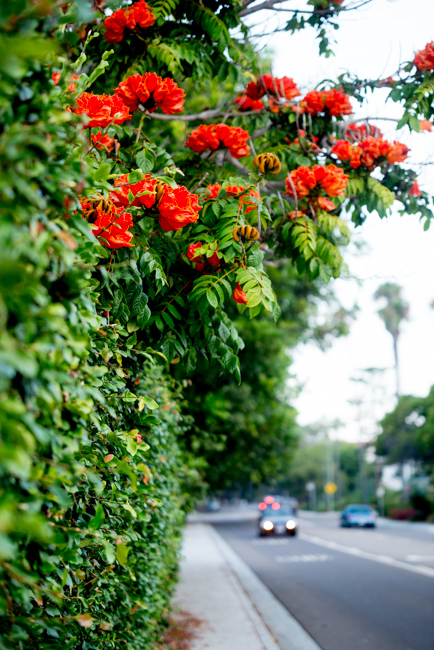 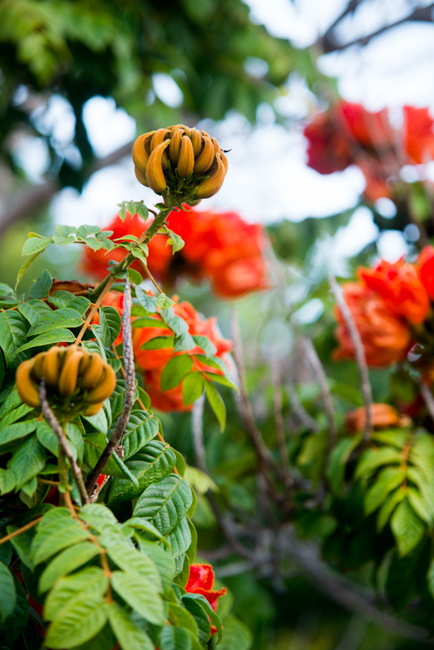 Buds form claw-like clusters at the ends of branches. 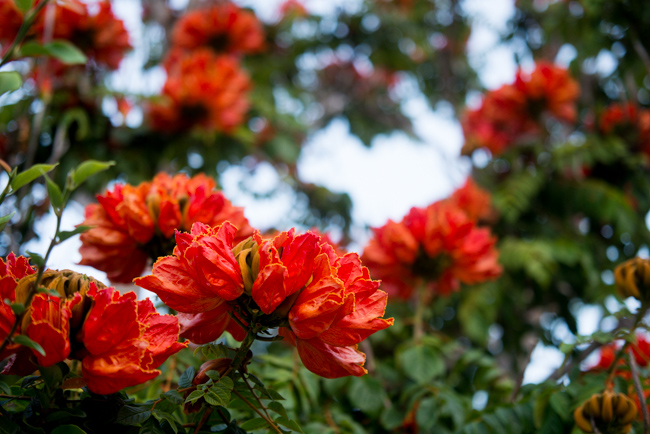 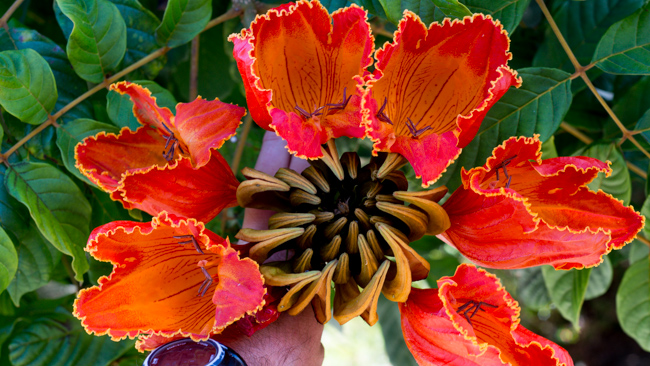 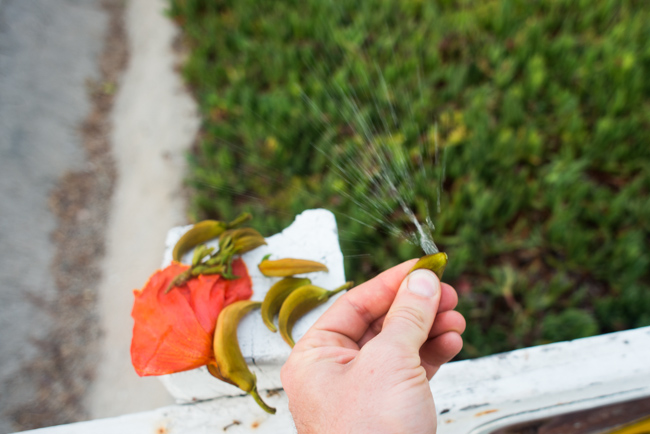 The only species in its genus, Spathodea campanulata is also nicknamed the “squirt tree”! It backfired on our first attempt: To discharge the bud gun, squeeze at the pointy end pushing towards the stem (receptacle). The bud capsule will burst and squirt water! 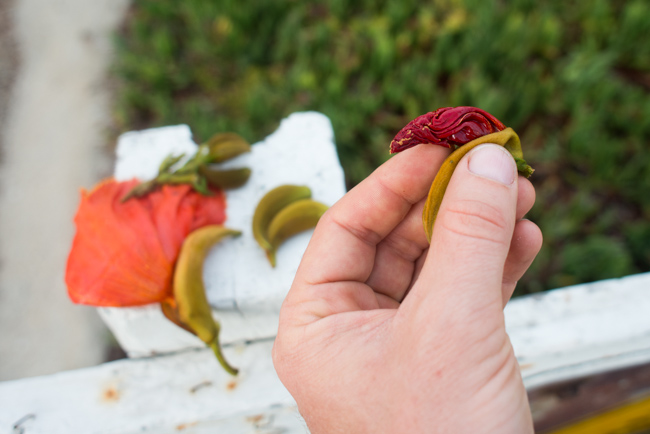 According to the Sunset Western Garden Book, Spathodea campanulata calls for moderate water, abundant warmth and full sun, and its flowers are known to bloom throughout the year in some cases, much to the delight of its hummingbird groupies and the sunbirds that peck holes in the base of the flower for a direct line to its nectar.

And when the flowers drop to the ground around the base of the tree, it feels almost like a prelude to autumn. Being East Coasters (RB from New England, C Brooklyn-born and DC-area raised), we’ll take anything we can get!

Count us as two of this tree’s newest admirers. Are these trees showing off their blooms in your neighborhood? —TH 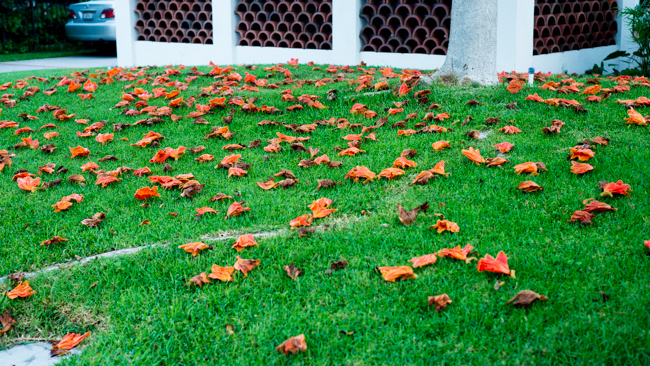 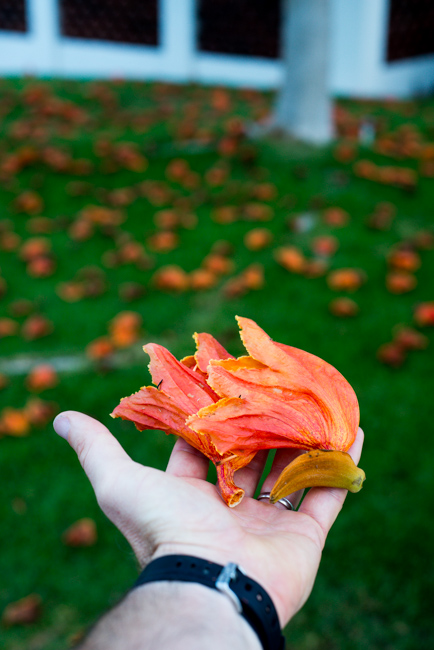 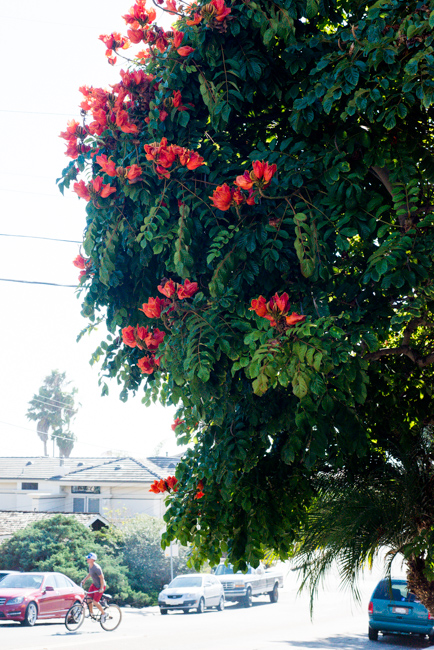