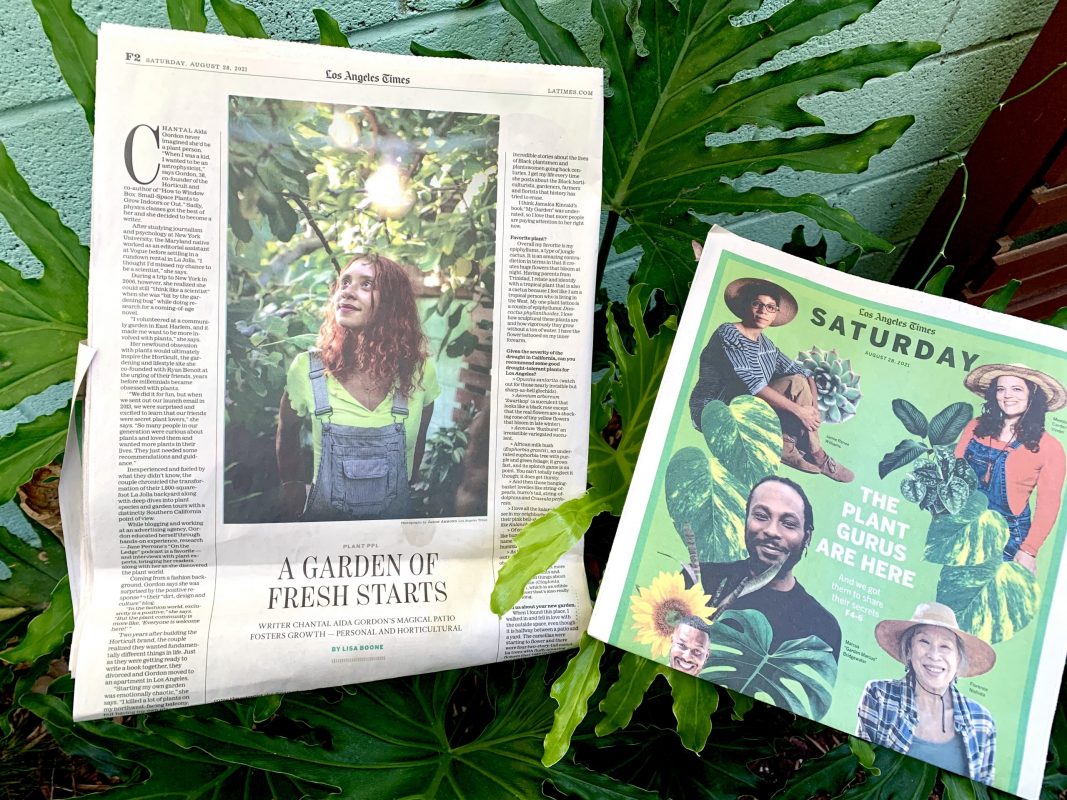 I would love to be a houseplant goddess. But the size of my windows and crisp square footage of my indoor space have other plans. Can’t say I haven’t tried: bird of paradise, philodendron ‘Lickety Split’ now reclassified as a Thaumatophyllum bipinnatifidum, a variegated rubber tree, even a ti plant — they’ve all made stops in the living room on the way to their ultimate destination: my patio outside the backdoor. On the BoP, it was waylaid by scale. The ficus caught a bad hair day that wouldn’t end. My hoya ‘Krimson Queen’ kept emailing me stories from Outside magazine hoping I’d take the hint. You probably catch my drift but I’ll go ahead and add that there was a bird’s nest fern that also got scale, in the kitchen. A pity because it looked so aesthetic between the iron legs of the dining table. (The ‘Lickety Split’ actually did okay, it just got too big.)

All these plants are now prospering outdoors. The once-anemic Ficus elastica is now much taller and with larger leaves and reddish new growth near the base. The BoP, which I put outside to temporarily rehab when I went out of town, has busted its roots through the nursery pot and its now glued to the soil by the chainlink fence. The ti plant gets a little crispy but is otherwise good with the dappled morning sun. And Miss ‘Krimson Queen’ can finally live up to her name. 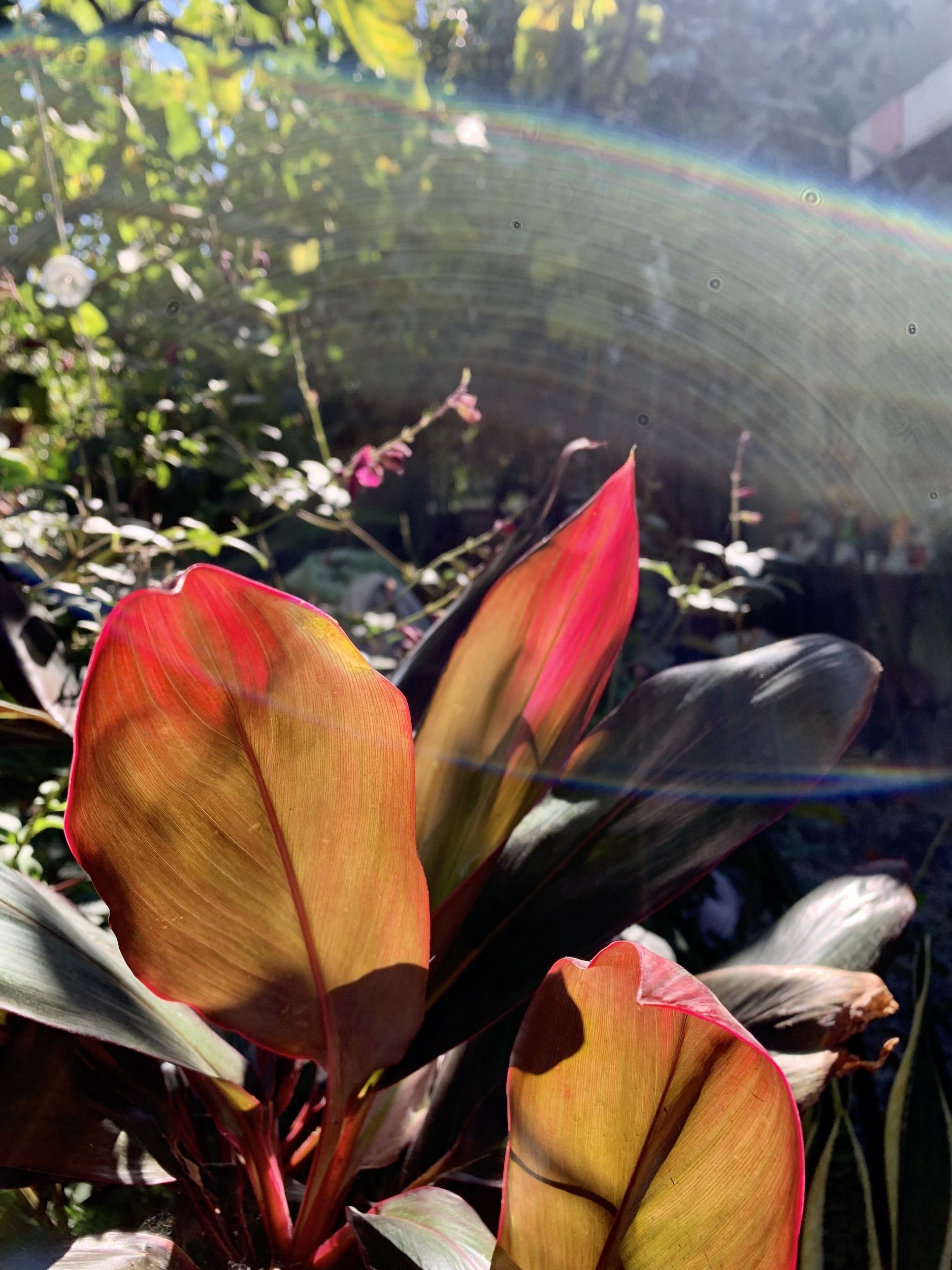 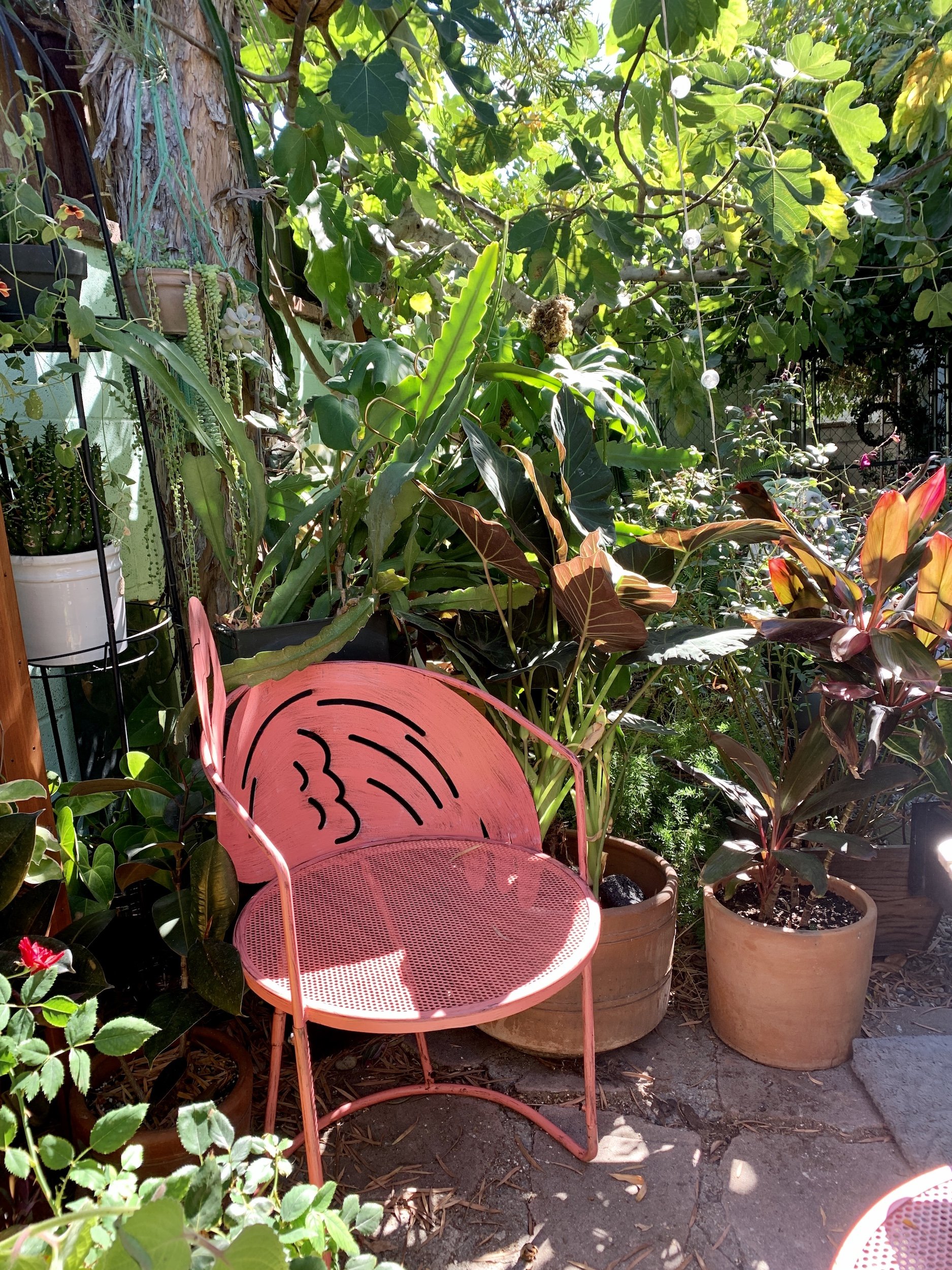 The ti (far right) is grouped in with an Alocasia ‘Regal Shields,’ monstera, epiphyllum, and flamingo chair. 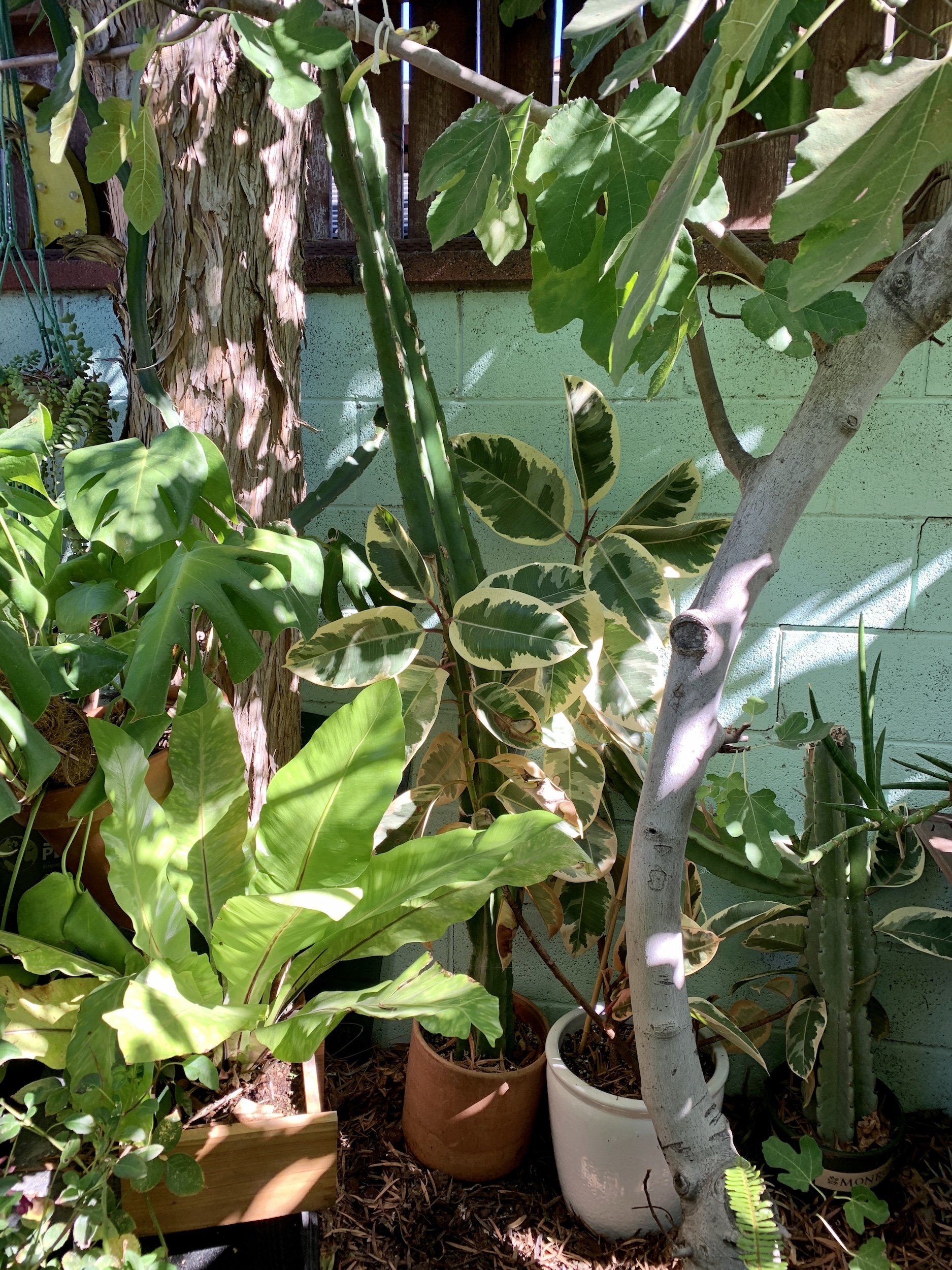 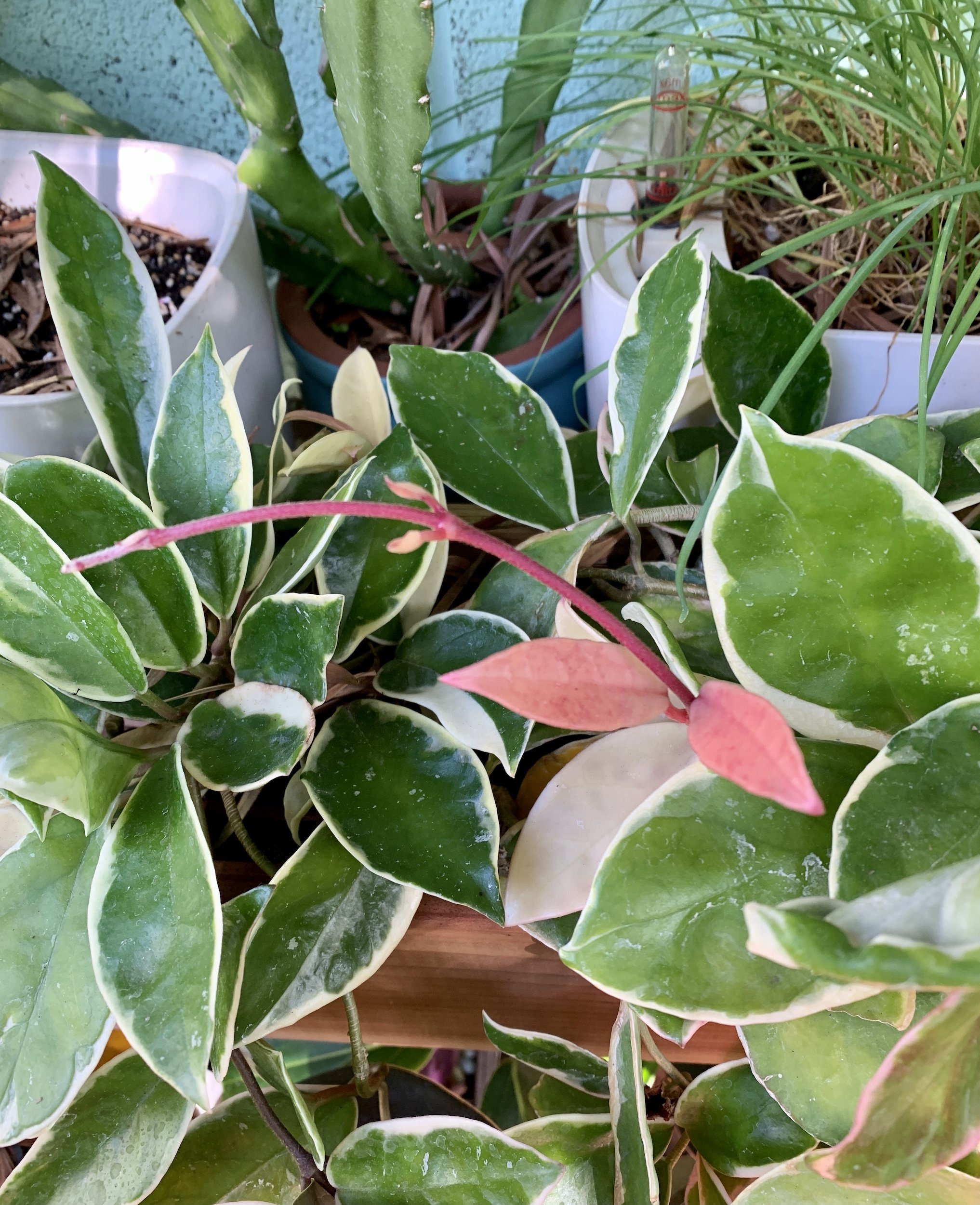 This Hoya ‘Krimson Queen’ sends out a pink lasso on the plant shelf. Its earlier indoors incarnation COULD NEVER.

Significance of all this? I get houseplant envy whenever I go on Instagram. Bathroom jungles! Breakfast with pothos! Staghorns ashing onto your blanket. That’s the life I want, I think. But then I go to my patio and spend hours there, moving stuff around and keeping up with what’s flowering and I realize I’m fine with a forest that doesn’t have a roof.

So it was wonderfully gratifying to see my patio garden featured in the LA Times over the summer as part of their Plant Ppl series highlighting people of color in the plant world. Journalist Lisa Boone evoked what my garden has meant since I moved here in 2017. Like what it was like to plant a garden on my own — on an enviable canvas that came with four camellia trees, a three-stories-tall podocarpus, a black mission fig tree, and a beloved nice-sized Meyer lemon. And how the garden was like a valve that released the indoor pressure of quarantine. Photographer Jason Armond captured the drama of having 100 or so plants mobbed together in a space that’s halfway between a patio and a yard. 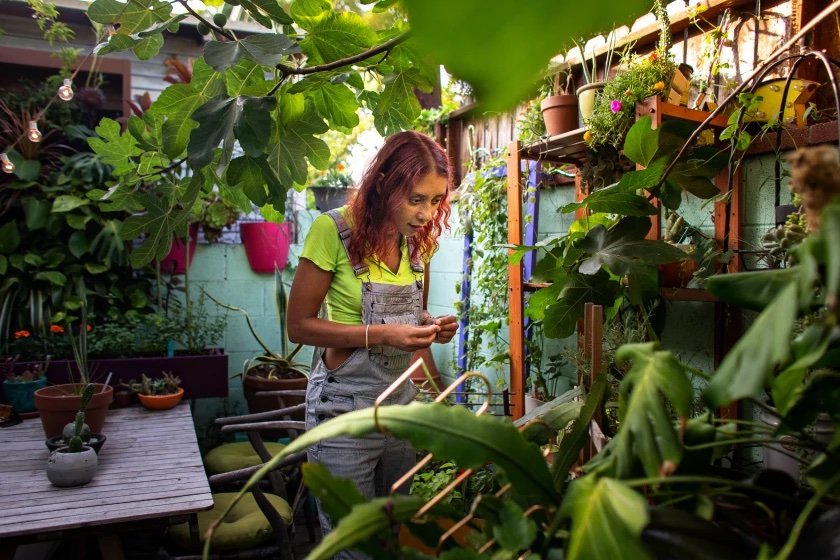 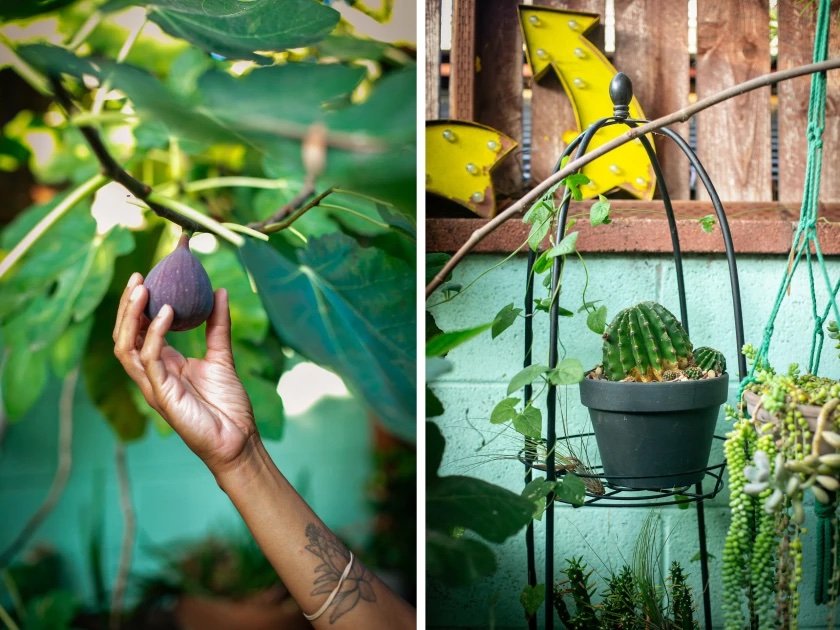 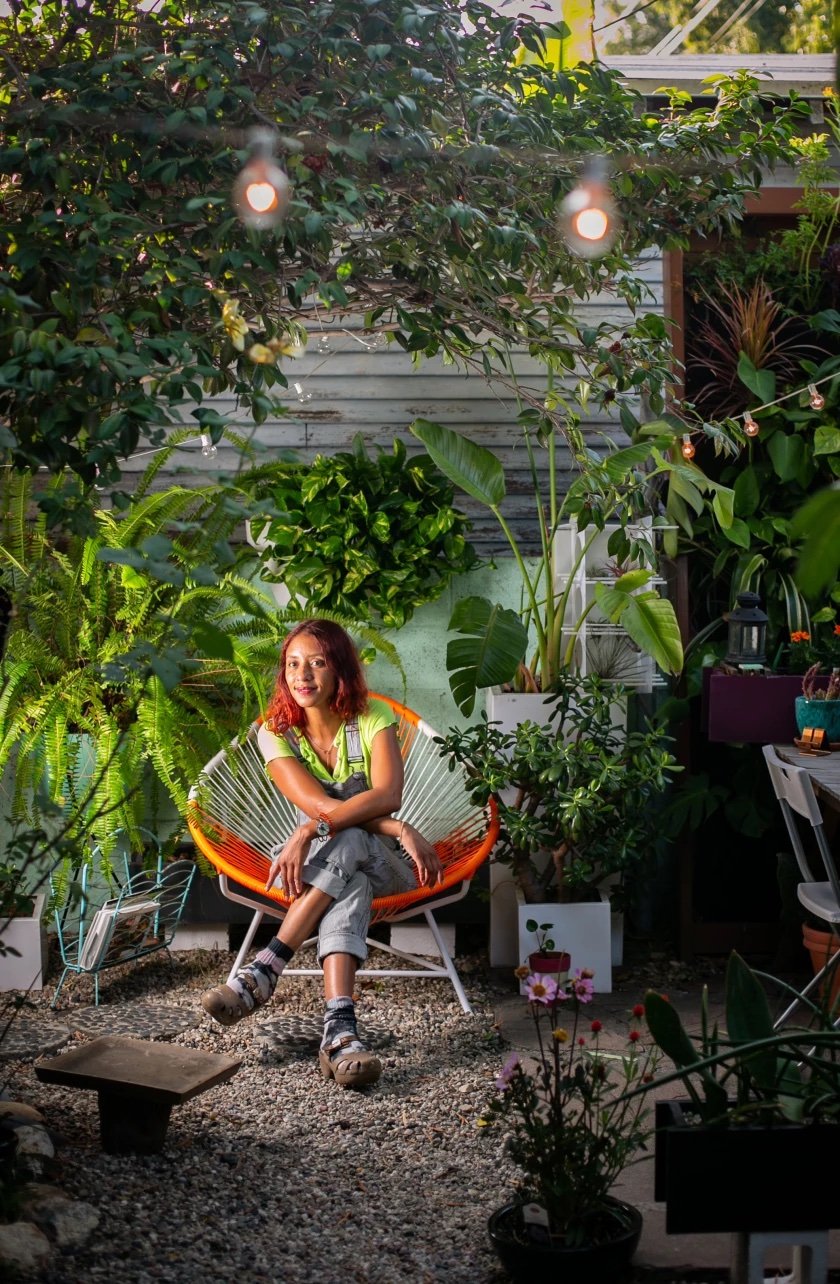 Heartaches, upheavals, new enchantments in the shadow of the epiphyllums. I realized that I’ve accidentally been living in a Gabriel García Márquez novel this whole time.