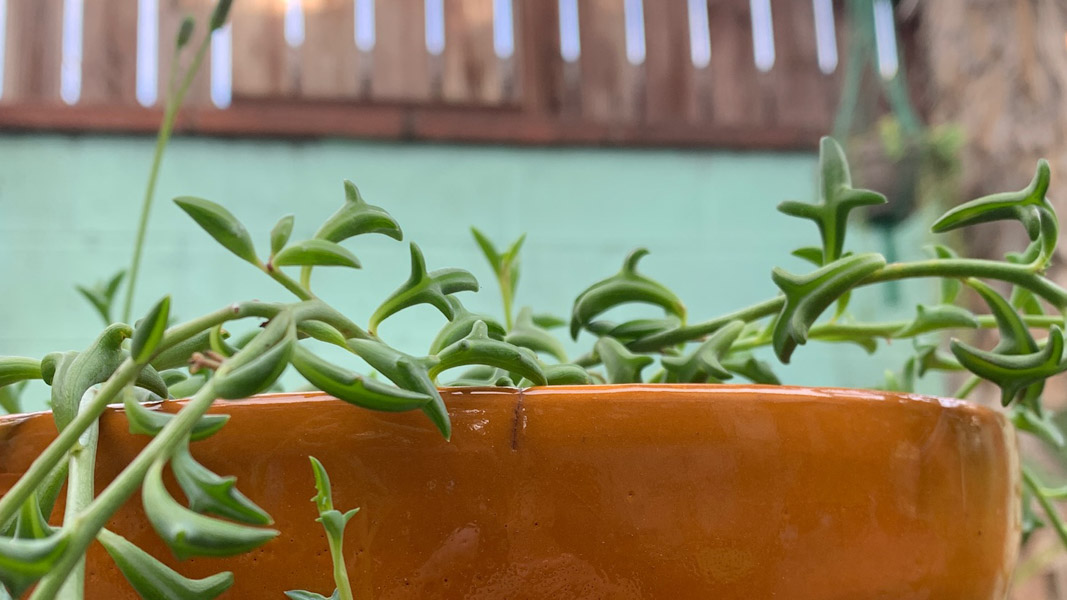 Like lots of bloggers, we get some out-of-left-field emails. Many of these messages assume we sell plants — from aeoniums to elkhorns to ZZs. (We don’t. But we do sell the vertical gardening gamechanger that is SkyPots.) But one email stuck with us: In June of 2018, someone dropped a line saying she’d been searching EVERYWHERE for a string of dolphins succulent plant but couldn’t find any in the U.S. String of…dolphins? It was our first time hearing about it. Sounded gimmicky — but we searched and we were hooked. Instant fans. Or make that fins? Anyhow, enthusiasts of Lisa Frank: you’ve just found your new plant.

The resemblance to a line of leaping dolphins is almost unbelievable. This plant, Senecio ‘Hippogriff’ (often labeled Senecio peregrinus and Dendrophorbium peregrinum) is a hybrid of the string of pearls succulent Senecio rowleyanus and the more upright candle plant Senecio articulatus. You’ll also notice a resemblance to the string of fish hooks succulent and the string of bananas, which you can find in the Horticult Garden La Jolla — last photo of the tour. 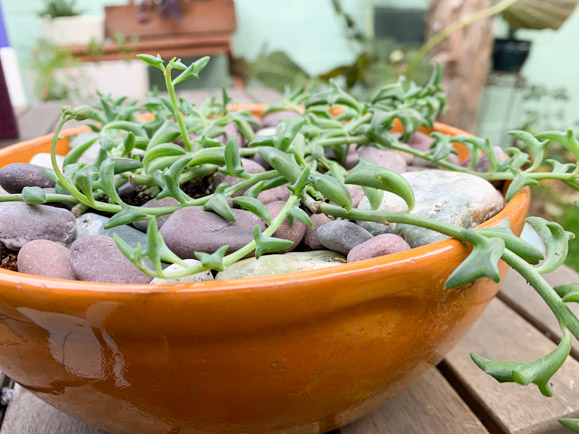 I added purple and blue “pammie” pebbles to give my string of ‘phins a trippy sunset energy. 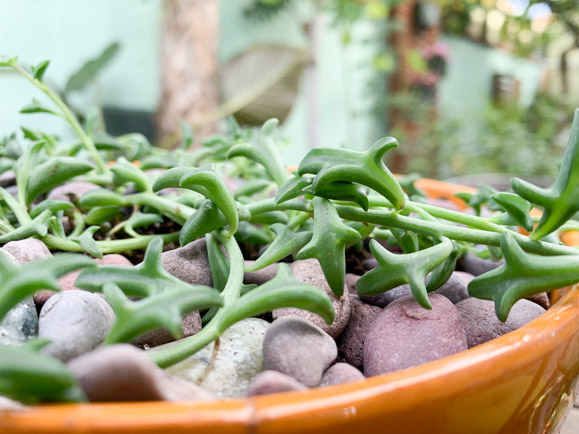 Not a fluke: THEY REALLY DO LOOK LIKE DOLPHINS.

Like its string of pearls parent, the string of dolphins succulent is a spreader, a dangler. As a houseplant, its first big viral moment is believed to be this tweet posted by the grower of one in Japan in 2017. It garnered more than 10,000 likes and more than 10,000 retweets, and dozens of replies asking where to buy it.

Today, fortunately, you can find them pretty easily. I ordered my Senecio ‘Hippogriff’ on Etsy, in the Hirt’s Garden Shop. It arrived at my LA garden in perfect condition, and I repotted it into a mod orange container from Potted.

For soil, I used a cactus/succulent mix with an extra handful of pumice for good drainage. My string of dolphins got watered by the recent rains, so I’m in no rush to add more — especially in winter, when typically you should pull back on watering. Have one of your own? Allow the soil to dry out between waterings; in winter that could mean watering just once a month, and the rest of the year, once every week or two. 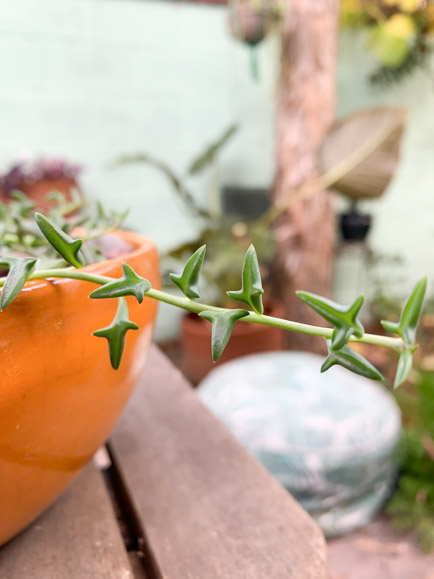 As if the dolphin-shaped foliage wasn’t wild enough, each leaf has a translucent “window” to let in more light in shadier conditions. See them in the dolphin bellies? 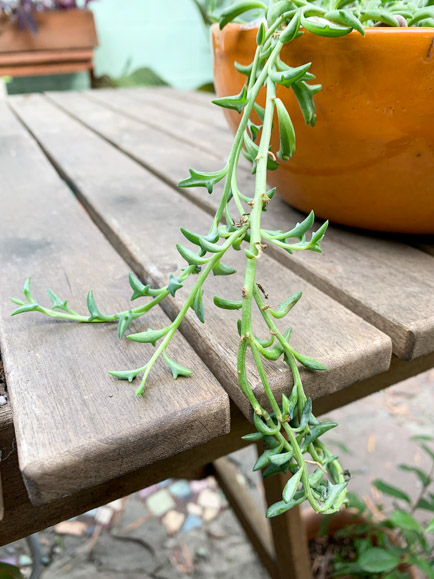 Come spring and summer, I’ll apply a succulent liquid fertilizer at 1/4 strength, just once each season — so twice a year, at most. The top dressing consists of lavender and robin’s egg pammie pebbles because I want this plant to also evoke a holographic fever dream Trapper-Keeper.

String of dolphins is not cold hardy, so don’t expose it to temps under 50 degrees F. It needs several hours of bright light, but avoid putting it in intense, laser-direct sun. Outdoors, you could even hang it in a “part shade” part of your yard, but be extra careful not to overwater.

Mine currently gets bright, indirect light on in my yard, slightly filtered by the high-up canopy of a podocarpus. The light has been enough to send it into flower! Check out the buds and later blooms below! They smell like cinnamon.

Looking for a plant that’s unusual and on-the-nose in a monkey face orchid kind of way? The string of dolphins succulent might be your next weird darling — it’ll make big waves in your garden, patio or brightly sunlit sill. 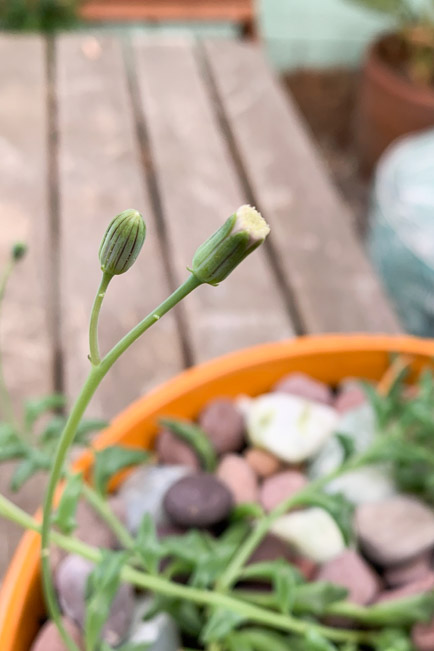 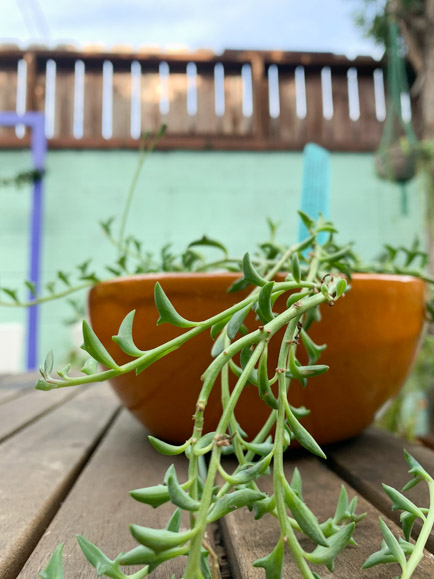 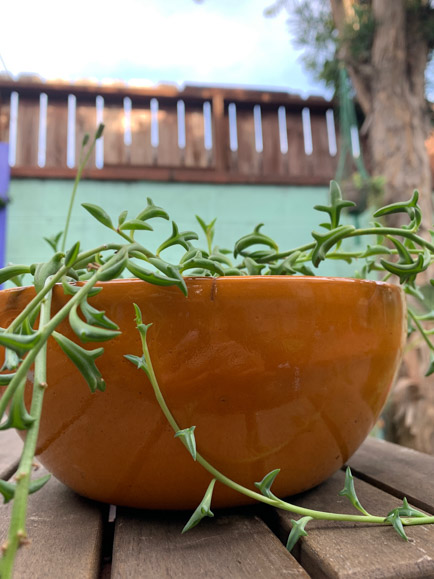 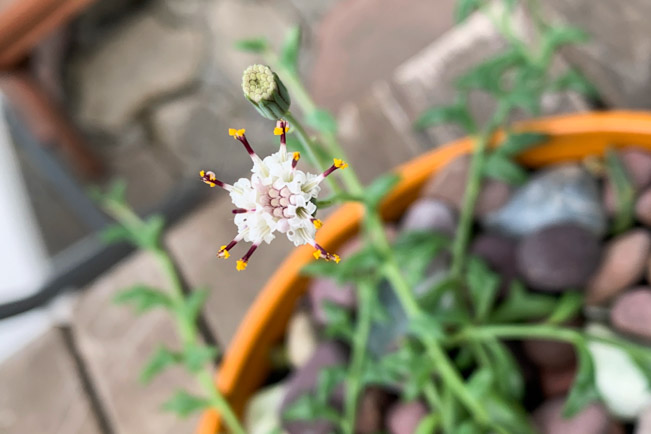 Flowers emerging in late January. Note the inflorescence is a cluster of teeny white flowers. 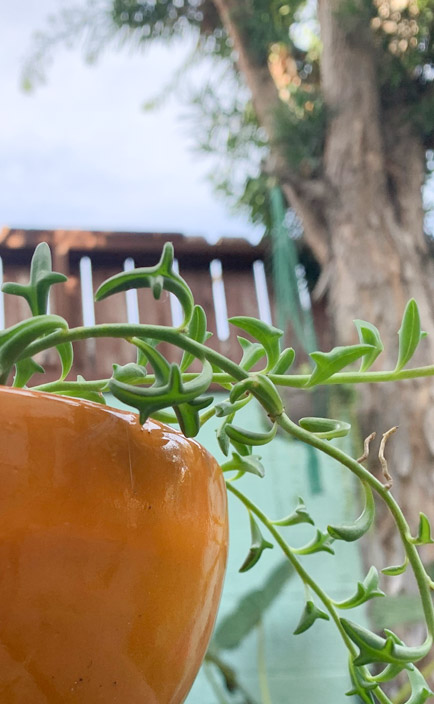