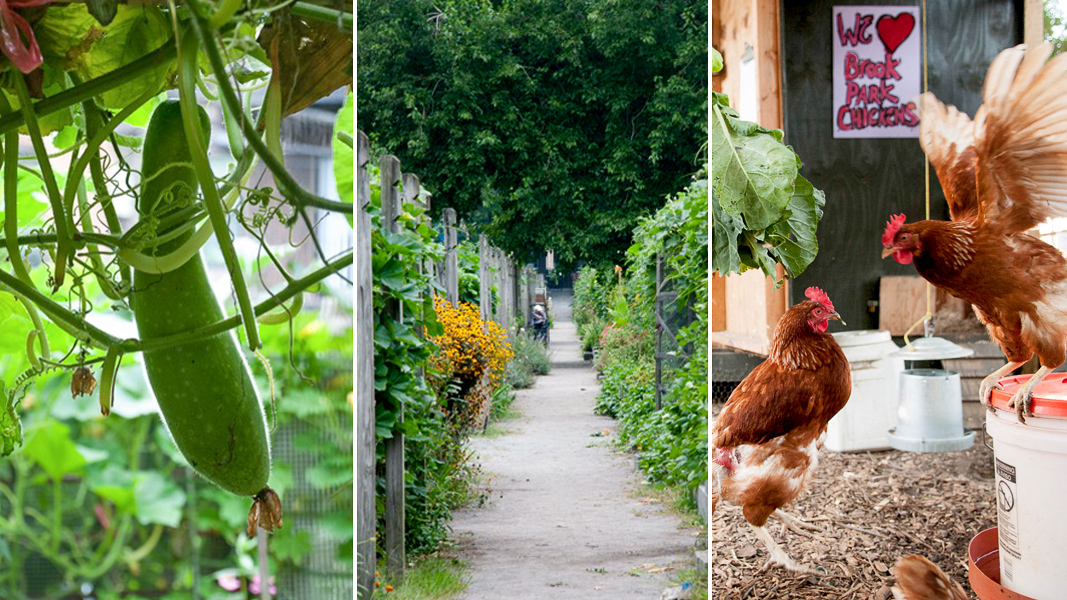 As herb/fruit/ornamental folk, Ryan and I are prone to bouts of vegetable envy. It flares up at the peak of sweet corn season — oh Instagram, why must you tease us so? — and returns around this time of year, when cold frames are being compared and beet greens are being planted across the Northern Hemisphere.

Luckily, we’re able to get our fix vicariously. We checked in with eight community gardens coast to coast — thriving in Boston, the Bronx, Los Angeles, Portland (Oregon), and Boca Raton — to discover what’s going in the ground, what’s coming out of it, what the hens are up to, and what it means to experience fall among their beds of plant life. (We contacted a few Midwestern gardens but didn’t hear back by post time; we’ll update if we hear back.)

The garden is set in the footprint of row houses that were torn down in the 1970s for an urban renewal that never happened. It’s two blocks long, with two path aisles and three rows of gardens. There are 152 plots, each approximately 10 feet by 10 feet.

The garden is a wonderful place, it gives people the freedom to grow their own food, and to be a part of a community. Most of the gardeners live within a six-block radius of the garden. Most of us would never cross paths otherwise. 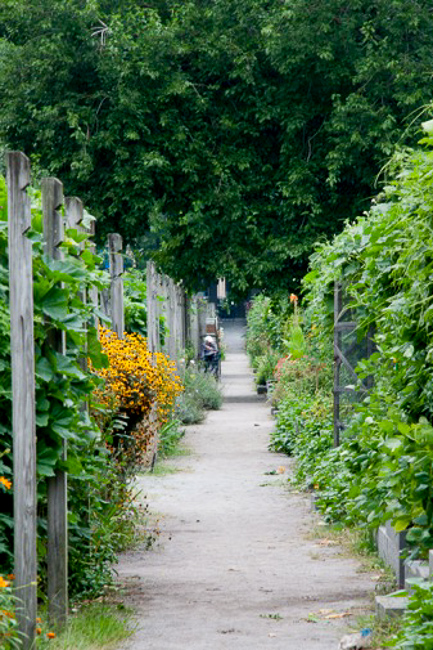 The final tomatoes, kale, green pepper, herbs, zucchini, spinach. Carrots are still in the ground  — they can go up till the ground freezes or, if covered over by straw, maybe longer. But once there is a deep freeze they are probably done.

The garden goes quiet January through March if there is snow. If not, people will continue to harvest root crops and tend cold frames.

Approximately half of the gardeners are of Asian descent; some are the original founders of the garden (1975-ish), so there is a large over-65 membership. Their crops include hairy melon, bitter melon, chayote squash, taro/elephant ear, yard-long green beans, and sweet potato, which is grown for the leaves rather than the potato. 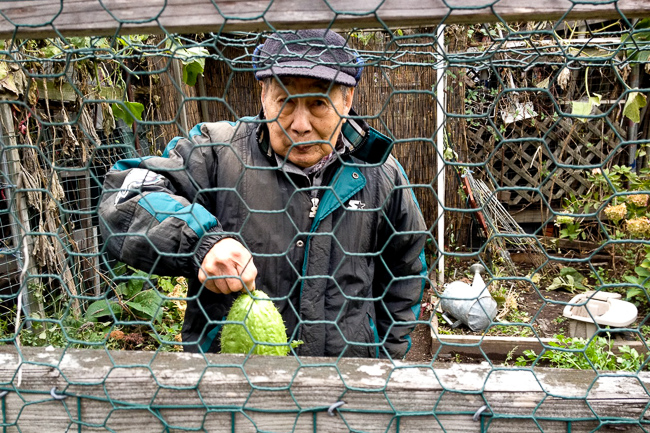 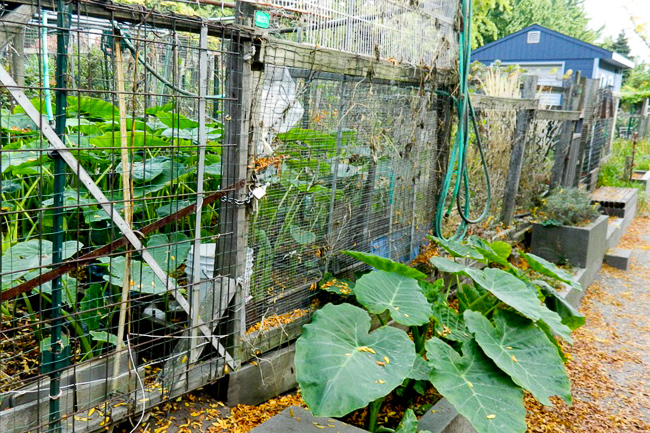 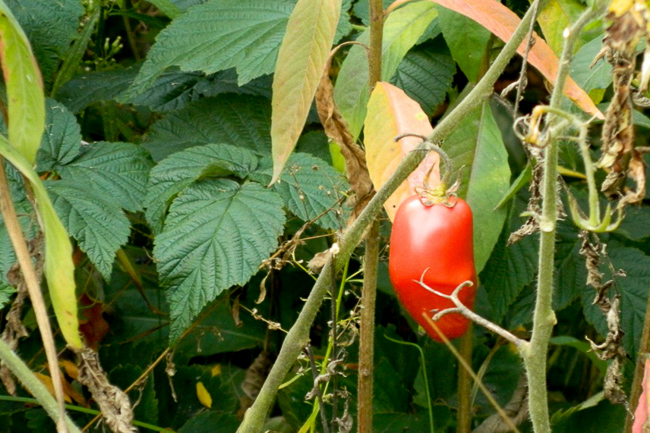 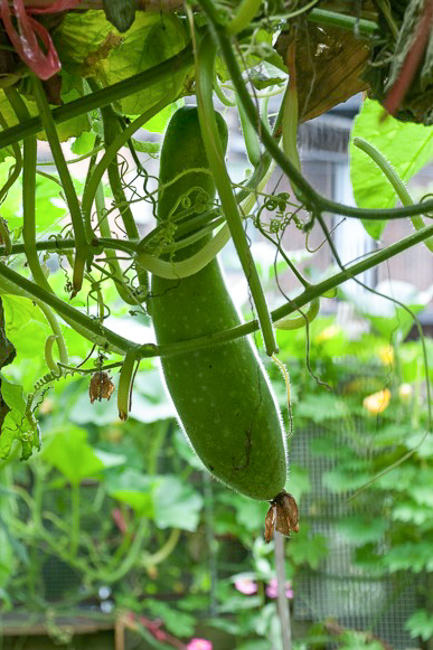 Putting the garden to bed for winter, setting up cold frames, turning over the soil, pulling all old vegetation, plucking unripe tomatoes from tomato plants, harvesting any fruits or vegetables to ripen at home. 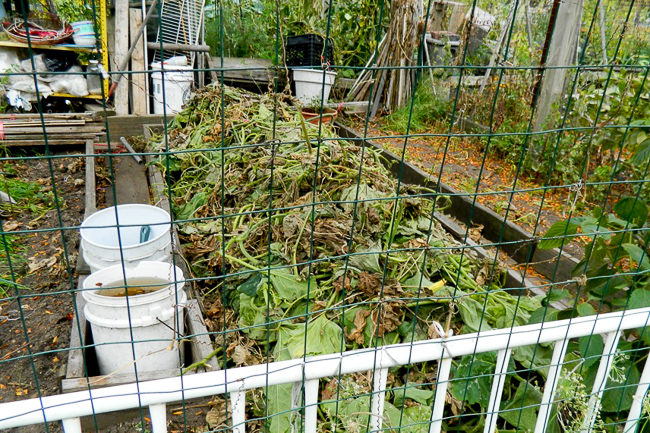 Fall cleanup is in full swing. Photo by Sarah Hutt.

Lettuce, spinach, carrots, kale and beet greens under cold frame. I have kale that’s been growing for two years. This year I am going to try and keep a pepper plant over the winter — we shall see.

The garden gets 500 daffodil bulbs from the city of Boston every year to plant in the fall; they are mixed in with bulbs members donate.  They are planted along the common areas and along the walkways to share with the community at large.

Brook Park Chickens was formed to bring fresh food to the poorest congressional district in the United States. Our eggs are hormone- and pesticide-free and are laid by happy [Rhode Island Red hybrid] hens. Another goal is to introduce children to urban agriculture and how hens can improve community gardens. Chickens do so many things like composting food scraps and keeping bug populations down. They are also fun to hold and handle. Eggs are shared through all of our community volunteers. 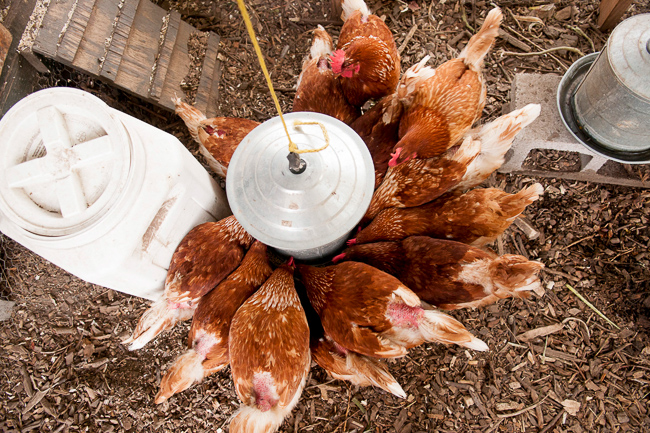 Many hens slow down a production in the wintertime, as they need about 12 to 16 hours of sunlight to produce an egg. So as the winter days get shorter, we may go from having 13 eggs a day to six or seven.

Backyard eggs are some of the best you’ve ever had. The flavor is hard to describe but when you cook with them they absorb the flavors of other foods and spices so nicely!  After eating these I never buy store-bought eggs! 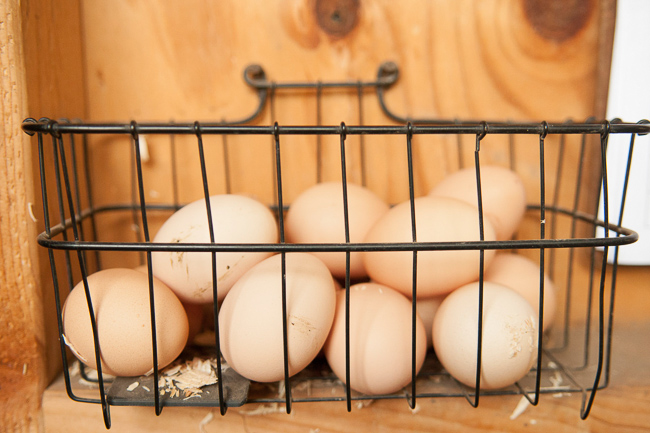 The hens have had an exciting year! Thanks to a generous grant from Citizen’s Committee we were able to build a chicken tractor and supply shed. The hens will be out in their tractors in the upcoming weeks cleaning out the old vegetable beds and preparing for winter. They love to snack on the leftover greens. We also collect wilted collards and hang them in the coop for “chicken cardio,” hanging them so the hens have to jump up to get their treats!

Now we are working on plans for a water catchment system and have our barrels ready to install in the spring. We will put up a clear roof to collect the rainwater from the roof that also keeps the run nice and dry during the rainy season. 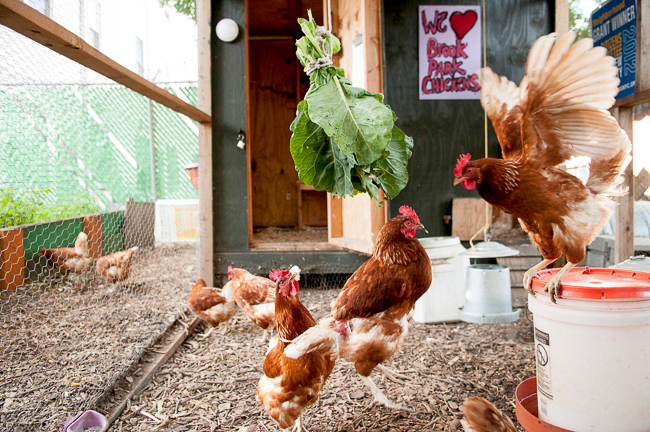 Wilted collards are at the center of this “chicken cardio” session. 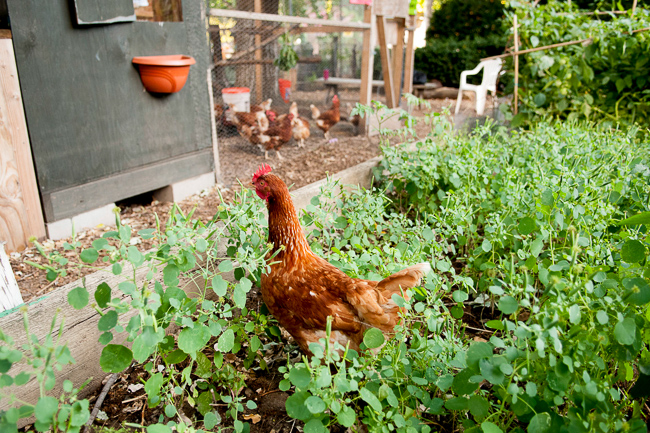 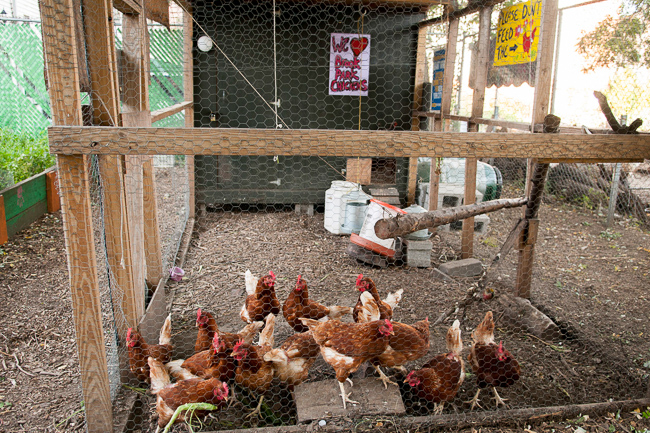 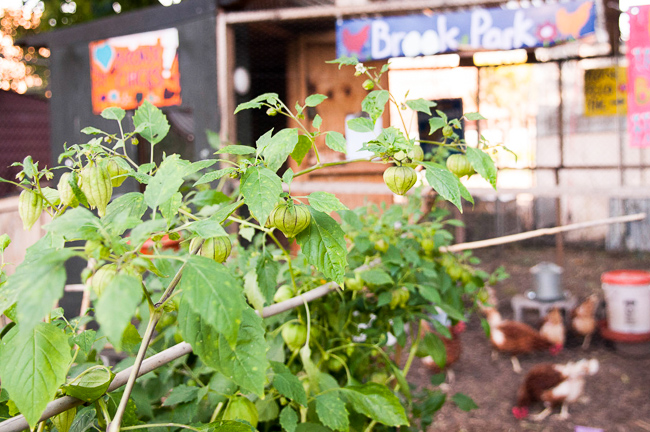 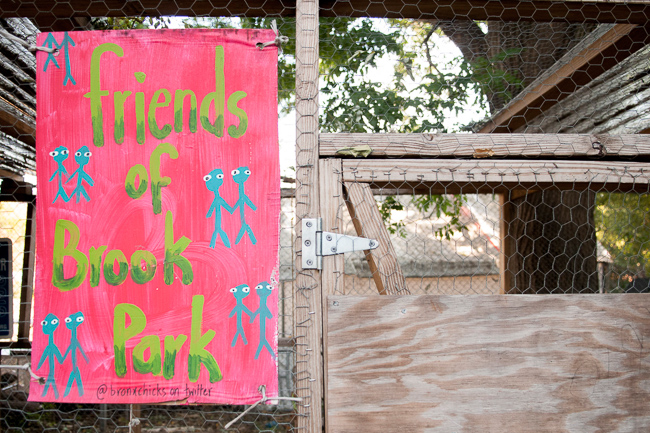 Editor’s note: Be sure to check out Brook Park’s Adopt-a-Chicken program, which includes a personal portrait and naming privileges! It’s perfect for the holidays. (And spots are limited…)

In South Florida our season is just starting now in October. We have a wide range of gardeners in our community garden from the local firefighters, Girl Scouts, Whole Foods, several schools and a Roots & Shoots program. 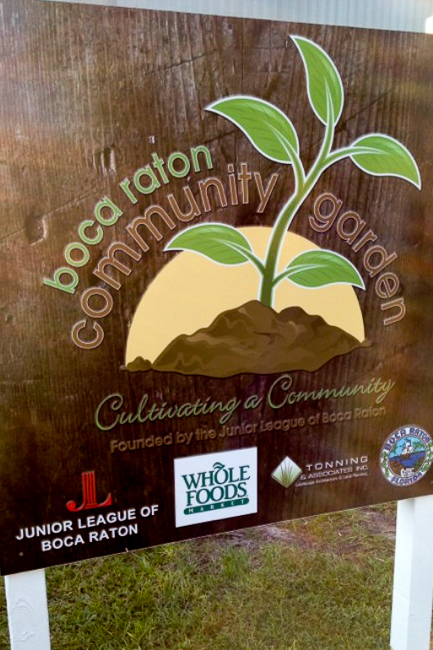 We are not harvesting yet, but our gardeners are busy planting for the season.

We have just completed a major expansion and added 30 new garden plots this year, making it the largest community garden in South Florida. 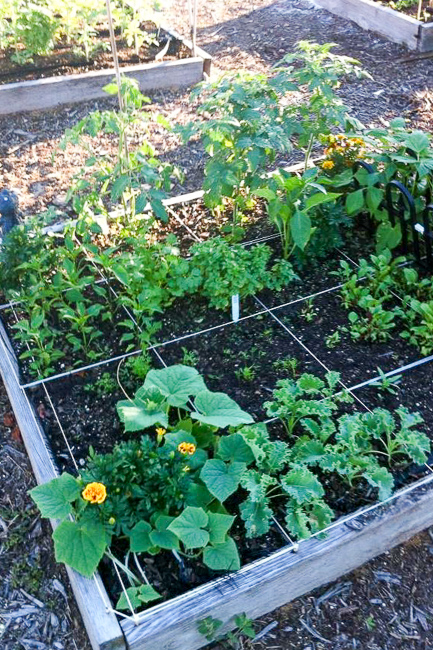 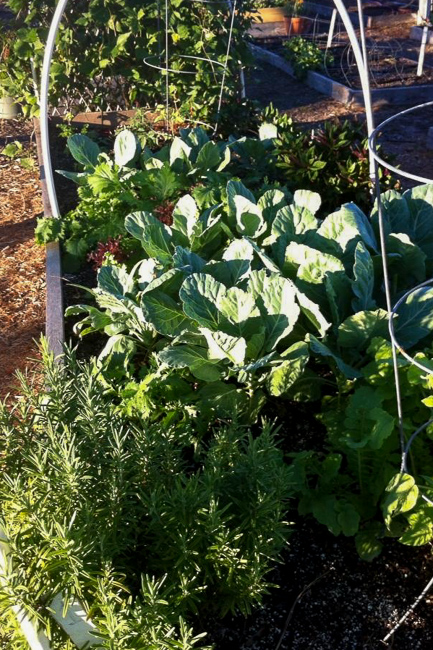 We have a wide range of planting, from strawberries to sweet potatoes, butternut squash, lemongrass, arugula, Okinawa spinach, rosemary, tomatoes, eggplant, many types of lettuce, grapes and more!

This is our first year open as a garden. It was built as a way to bring neighbors together and create a stronger neighborhood and sense of community. Most of the gardeners live in the neighborhood where the garden is located.

We are currently harvesting the last of the tomatoes and peppers. We are also harvesting winter squashes and leafy greens such as kale and chard.

Gardeners are cover cropping and mulching plots for the winter. We recently had a work party to do these things for abandoned plots and for the plot we garden collectively to donate produce to a local non profit. We also spread wood chips over the paths. We are always weeding paths, straightening the shared tool shed, tending the compost and weeding our own plots. 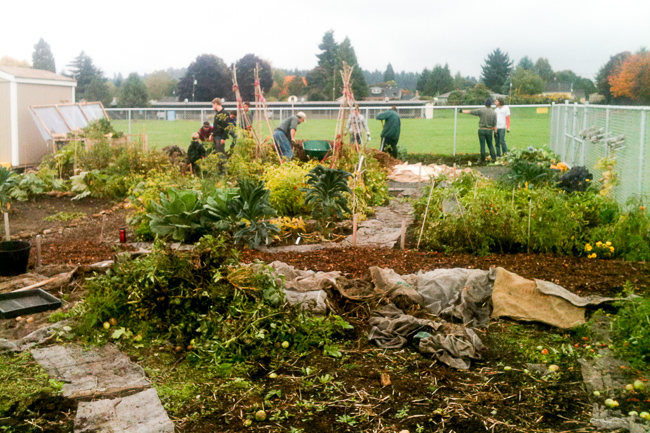 During a work party, gardeners winterize the plot used for produce donations.

Those who are winter gardening have planted radishes, kale, leeks, Brussels sprouts, lettuce and spinach starts as best I can tell. It is likely garlic, carrots and other things have been planted as well but have not yet become visible. Radishes and lettuces will be harvested over the next few months. Existing kale and leafy greens from the summer will continue to produce over the winter. New plants will be ready starting late November.

Cabbage, carrots, kale, squash/pumpkins, kohlrabi, lettuce, spinach, cilantro, and hoping my last ears of corn ripen — still looking good as long as it doesn’t freeze in the next couple of weeks.

Garlic, onions, spinach, lettuce, cilantro. Greens are under a cloche; will have cold frames when it freezes. Garlic and onions will be harvested next summer — onions in June, garlic probably July or August.

Spinach, lettuce and cilantro are harvesting now through frost. When it freezes, my cold frames will keep the plants alive, but they’ll stop growing for a while. They’ll probably start growing again in February and continue to harvest till they go to seed when it warms up, probably April or May. I don’t harvest my lettuce as a head; I harvest outer leaves through the whole season, which keeps it going longer.

I have harvested a lot winter squash, Swiss chard, radicchio, parsley, kale and sorrel. We [also] have a lot dahlias, salvias, cosmos and marigolds still blooming and some nasturtiums, and lots of herbs. 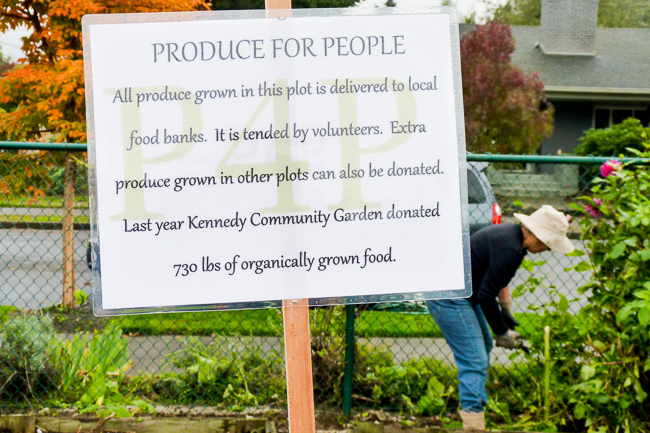 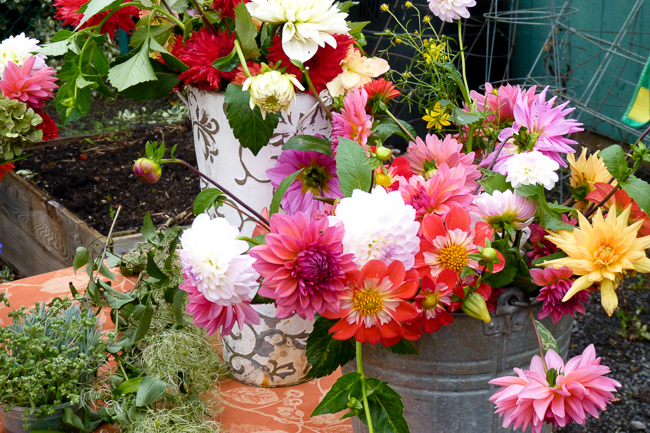 At Kennedy Community Garden, the dahlias are still in bloom. 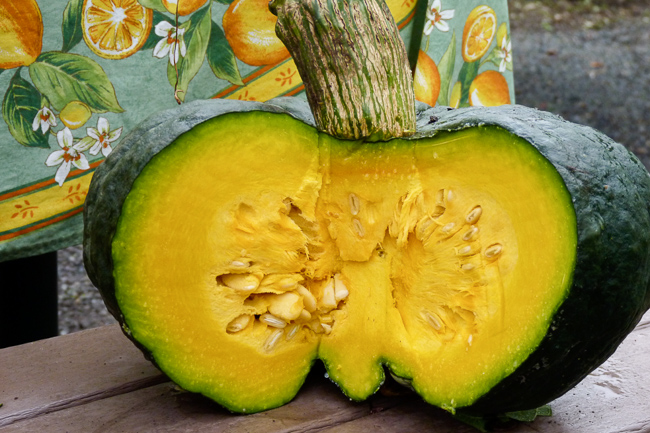 Winterizing with sheet mulching and berms (or hugelkultur), cover crops, weeding and planning. We recently spread bark mulch and compost.

Winter peas, fava beans, some crimson clover and that’s about it. Many gardeners have Brussels sprouts, and other greens as well as beets, carrots and parsnips. We harvest the winter peas and fava beans in the spring. They hold the space/soil through the heavy winter rains and start growing and forming fruit in early spring. 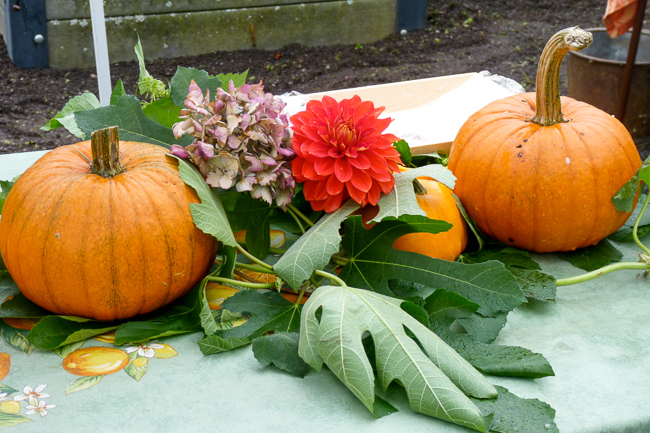 Spinach, kohlrabi, cabbage, and transplanting herb seedlings. I plan on harvesting the spinach as soon as two to three weeks, kohlrabi as soon as the bulbs form (about another month) and the cabbage I plan on growing as a winter crop. The herbs are fast-growing, so about a month until those are ready for harvest.

Still harvesting basil and Christmas lima beans, but we’re mostly pulling out summer crops and putting in fall ones. So we’re in between a bit.

Bed prep is happening; adding compost to beds to revitalize them before planting fall crops. Planting seeds and seedlings for fall crops.

I’m planting lettuces, sweet peas, sugar snap and snow peas, carrots, parsnips, beets, Swiss chard, and cover crops for winter. I started seeds under grow lights for kale, broccoli, cabbage and kohlrabi awhile ago, and those are just about ready to go in the ground. It’s my favorite time of year in the garden. 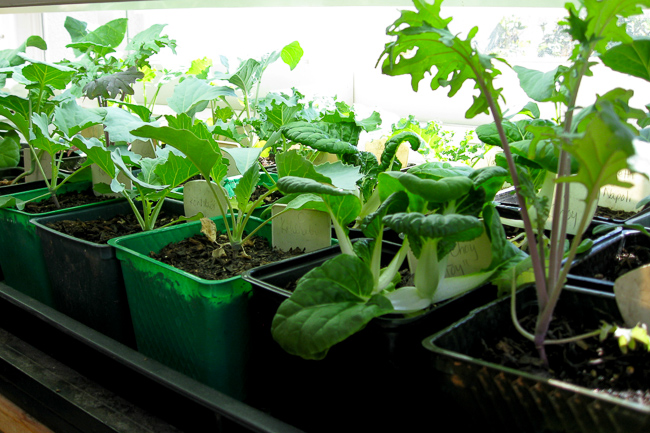 The brassicas started under grow lights are just about ready to go in the ground.

The chard and kale will be the first to harvest, probably in the next few weeks. Lettuces will follow suit around the same time. The other brassicas (cabbage, broccoli, kohlrabi, etc.) will probably take until December or January. Snow peas are ready before sugar snap peas, and those we pick through the winter and eat straight in the garden, probably starting around late November (can’t really remember). Root veggies will be on their own time frame, but they mature in about 65-70 days, so that’s around the beginning of the year. 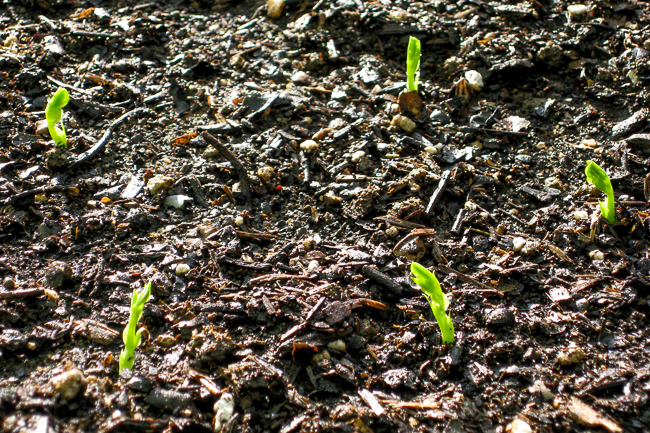