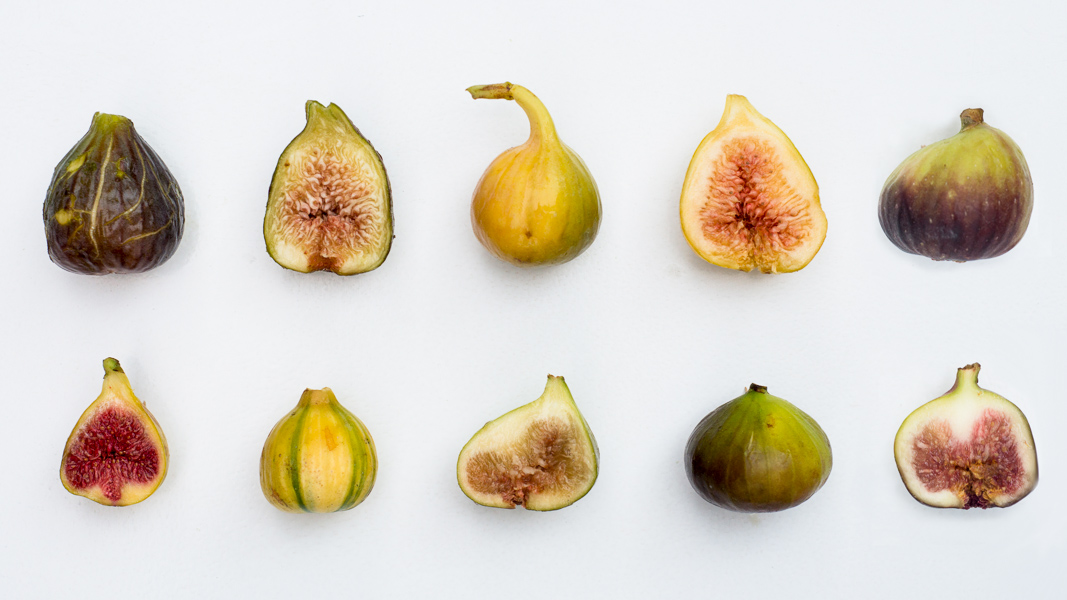 Is there a fruit more loaded — with innuendo, with mythological baggage, with outrageously potent nectar — than the fig? Cleopatra fancied them, and Bacchus wore them on his head. Its flowers are actually inside its “fruit.” They were the very first Olympic prize, given out as laurels during the ancient games. 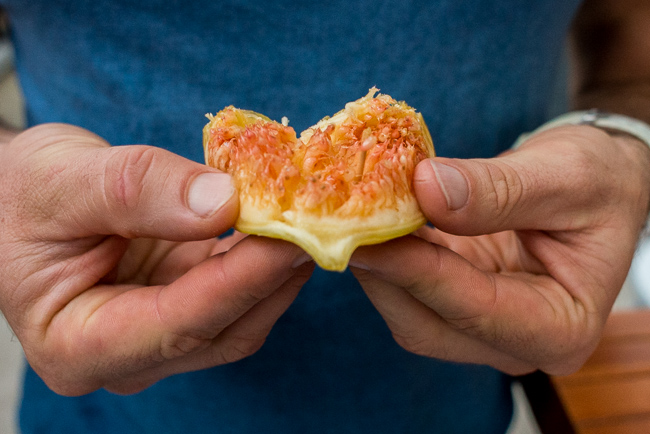 The rosy inside of a Diana fig. The “fruit” is in fact a mass of flowers pollinated by symbiotic wasps.

Up until now, Ryan and I have only flirted with figs. You know, a proper recipe here, a drunken drizzle of balsamic there. But this season a few cultivars have been luring us into a more serious commitment.

Those varieties are ‘Panache,’ ‘Diana,’ ‘Osborne Prolific’ and ‘Kadota.’ They’re a colorful departure from the ‘Black Mission’ and ‘Brown Turkey’ figs that we’ve cooked with in the past and that the supermarkets here in Southern California sell in heaps when they’re in season. (There’s typically a burst in the spring — known as the “breba” crop, when fruits grow on last year’s shoot growth — followed by a greater abundance that ripens in the late summer and fall.) It wasn’t until our fateful trip to the farmer’s market with Yovana “Rawvana” Mendoza that we really began to explore this new world of Ficus carica fruits. It was at the farmer’s market that we discovered these lesser-publicized cultivars, each with its own unique flavor, figs you can eat on the fly. No prosciutto wrap necessary. 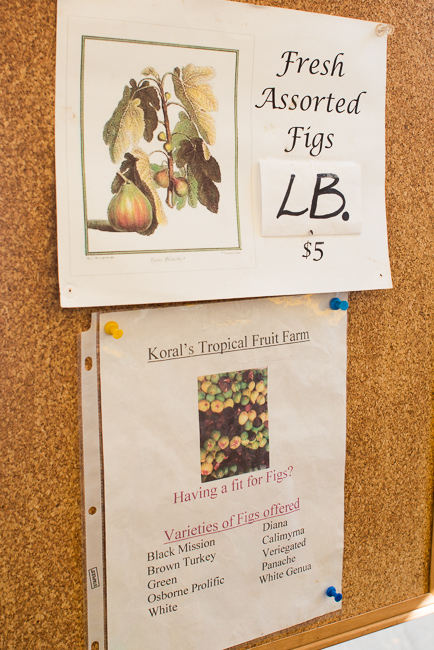 Inside the stand for Koral’s Tropical Fruit Farm at the Hillcrest Farmer’s Market.

We bought them from Koral’s Tropical Fruit Farm, which sets up shop every Sunday at the Hillcrest Farmer’s Market. Koral’s was out of Brown Turkey and Black Mission (widely considered the tastier of the two) that day, but we figured we would find those at the store. Alas, the fruit was nowhere to be found anywhere we called.

“We’re done for the season,” one supermarket reported.

But this article about figs’ early 2013 arrival also says some crops are expected to hang on through December. What the fig is going on?! we wondered.

In a last-ditch effort, we called Whole Foods again for the 20th time yesterday…and paydirt! They had just gotten in a delivery of Brown Turkeys. In person, a staffer in the produce department did confirm fig season has been “weird” this year. Delivery of the fruit has been spotty, he said, noting that in past years “we’d have them through Thanksgiving.”

Long story short: Check your local farmer’s market. And if you’re planning a fig-based recipe, you might want to have a Plan B in your back pocket. If you encounter any Panache, Diana, Osborne Prolific or Kadotas, here are our tasting notes. We also included our take on Brown Turkey; as for Black Mission, we’re still on the hunt… 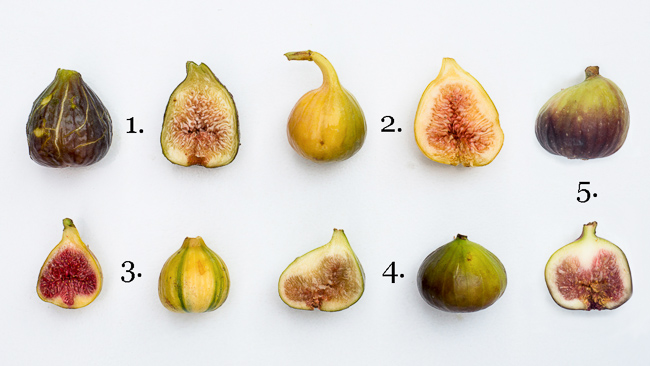 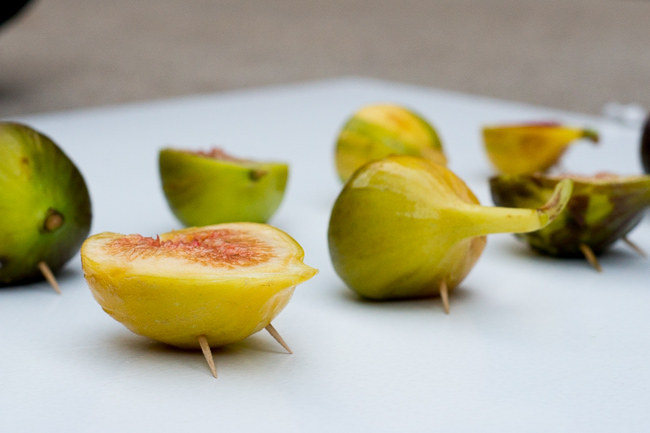 Pssst. How did we get these urn-shaped beauties to hold steady during our fig shoot? Strategically placed toothpicks.

Osborne Prolific: With purple-brown skin more delicate than tissue paper, this variety has a darker, more serious, more vegetal taste. It’s the most savory of the bunch, but it’s not without a subtle sweetness.

Diana: The sweetest of our group, this golden drop is also notably refreshing and watery, with a tropical character that hints at banana and pineapple.

Panache: A jammy kiss from the gods, this fruit’s exterior — bold green stripes on canary yellow — is a worthy preview to the spectacular magenta flesh inside. It tastes the way we imagine a ruby would taste: like strawberry jelly with a hint of melon.

Kadota: The pert green skin gives way to a heart of amethyst. The taste is appealingly complex; “green beans,” “grapes,” “apricot” and “vanilla” were the notes we blurted out between bites.

Brown Turkey: The most fibrous of the five, we found the taste of this variety insipid — not necessarily a bad thing if you’re using it to support stronger flavors like blue cheese. When we tasted the flesh separately from the skin we were pleasantly surprised by a strong suggestion of watermelon.

Our favorite? The Panache, hands down. While entertaining, we’ll serve that variety for dessert alongside Dianas and Kadotas, mixing both whole and halved fruits on a vintage serving platter.

What kinds of figs have you been eating this fall? 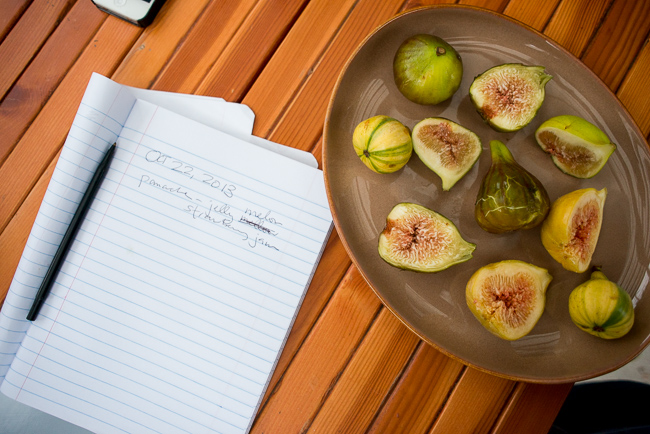