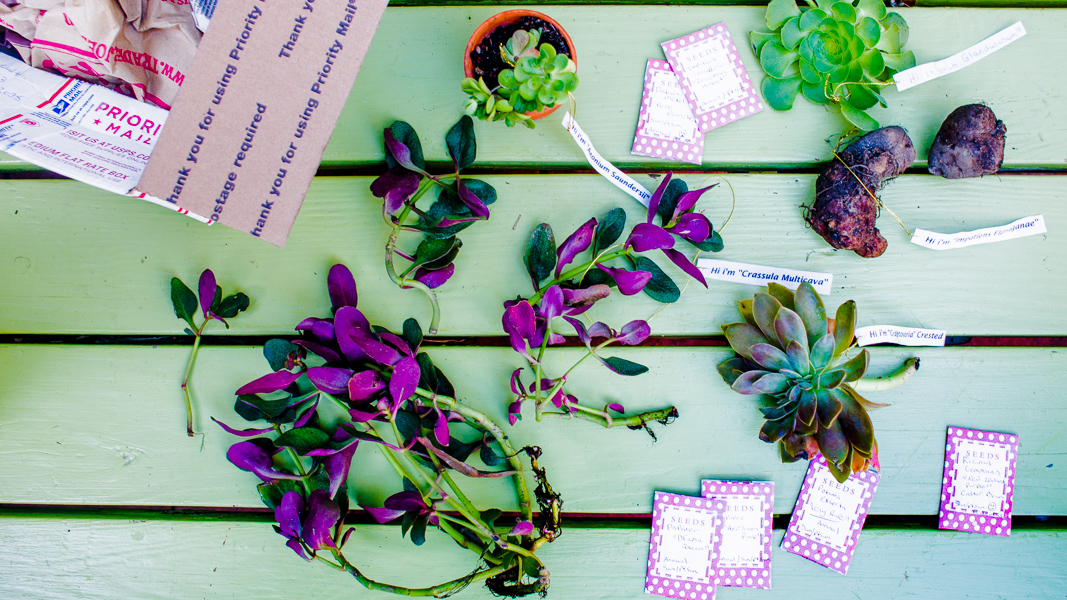 To selfie or not to selfie?

We don’t know; we’d rather take pictures of plants. But it was across Instagram’s sea of selfies that we forged a friendship with a brilliant gardener named Warren Keller, whose photos depict the joy, verve and drama of gardening and plant appreciation. We haven’t been up to his Central Coast garden yet, but his shots put us right there: stunningly unusual specimens like a crested medusa head euphorbia, an intriguing still-life of jimson weed from Annie’s Annuals, and a jaw-dropping abutilon flower.

His feed is a nonstop ride through species familiar and unfamiliar, and care practices we need to adopt.

Months of chatting about plants on Instagram eventually expanded into life outside plants — for example, we learned about Warren’s adorable kids. We asked him for advice about a friend’s flagging aloe rehabbing at our house, and he provided sage advice. This season, he also offered to send us a variety of seeds from his garden.

The day they were scheduled to arrive last week via Priority Mail, Warren warned us that some “might need a good drink.”

Don’t we all, we thought. Right before we wondered, Wait, but they’re seeds…

Then we brought our box home from the post office. In addition to six darling polka-dot packets of seeds, the box contained cuttings from rare succulents we had admired on Warren’s Instagram feed! Each plant wore its own nametag: “Hi, I’m Aeonium saundersii.” Graptoveria crested. Aeonium glandulosum. The seeds included ‘New Zealand purple’ castor bean, the kaleidoscopic Papaver ‘Drama Queen,’ and the exceedingly scarce Petunia exserta, endemic to southern Brazil and believed to be the only petunia pollinated by hummingbirds. 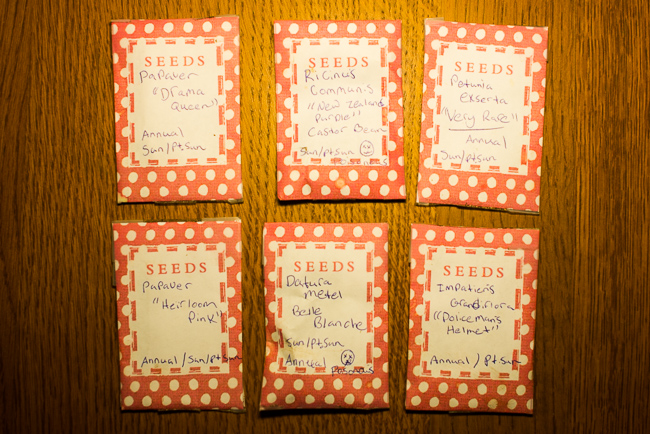 Plus there were two tubers of the bewitching and endangered Impatiens flanaganae flower, which, Warren says, “must be grown in either an early morning sun or a late, late afternoon sunset. They won’t bloom if the have too much sun or strong heat.” The rare variety of Crassula multicava, with its purple and green leaves, is a succulent ground cover known for star-shaped winter blooms.

The latter Warren got from a friend in South Africa.  “I believe that in this sharing cycle, we are doing more for the plants than we think,” Warren tells us by email. “For the endangered plants I sent (Impatiens flananganae and Aeonium saundersii) — we are growing a part of their life, their history. Hopefully one day their endangered status will no longer haunt them. And if at any time I fail, I will feel good knowing that at least I was a part of it.” 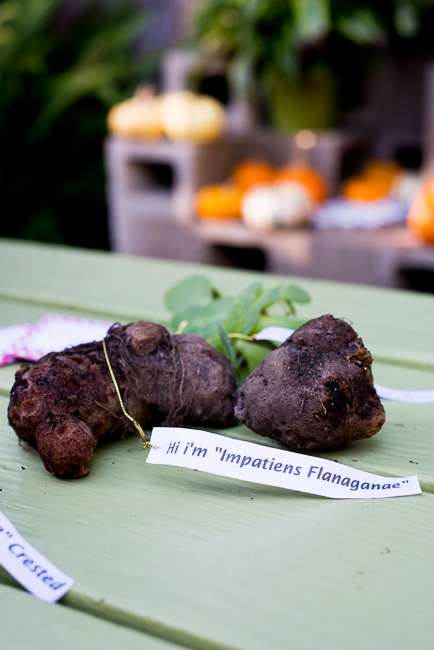 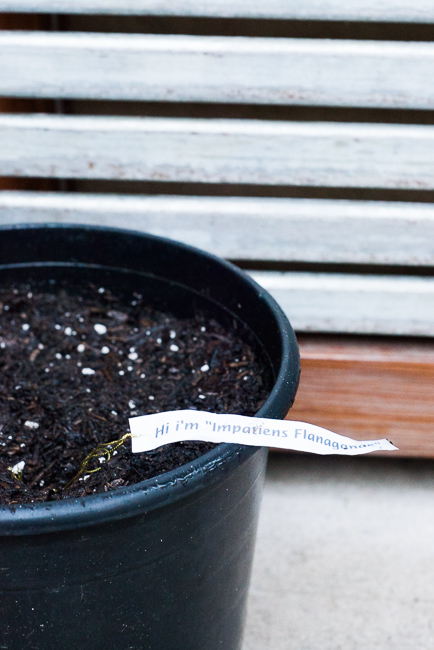 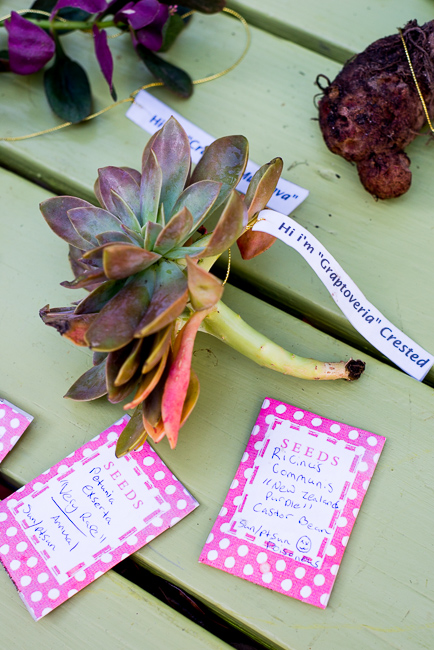 Warren’s soil secrets for succulents? “I always recommend the Supersoil Palm and Cactus Mix that is at the Home Depot,” he says. “Miracle-Gro has way too much peat moss; that’s bad for succulents, it’s either too dry or soaking wet, no balance. I always throw a handful or so of sand into the potting mix, then plant accordingly. About 30 percent sand and 70 percent soil. Not just any sand, it has to be an all-purpose, coarse sand — I get that at the Home Depot too. It’s made by Quikrete.”

He adds, “The reason I add the sand is I’ve had lots of cacti and succulents die in the wintertime due to rot,” he adds. “Sand doesn’t hold water, and creates more air pockets in the soil, therefore allowing more water to pass through faster. I haven’t lost a single cactus or succulent since I’ve started using sand.” 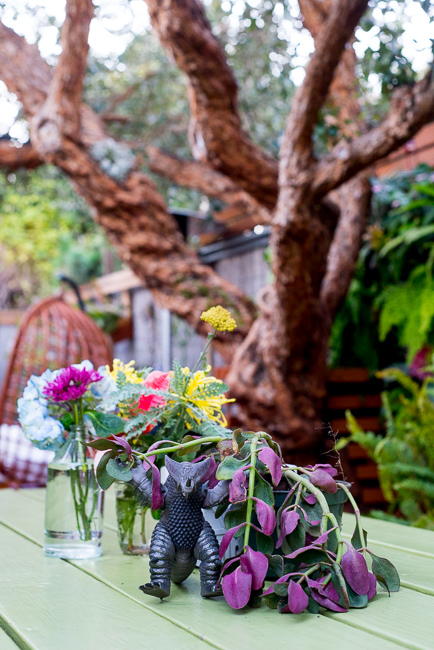 The pot is a temporary home for the Crassula multicava until we clear a spot for this rare ground cover.

We’re bowled over by the thoughtfulness and care that went into the delivery we received last week, and also by the sense of responsibility we feel to do right be these plants. It’s also an inspiring gift idea: If a friend loves terrariums, why not send her succulent cuttings straight from your garden with clever nametags? Seed packets are also great for adding a sweet, personalized touch.

As we unearthed each plant from the box and later planted each throughout our garden, we were also filled with thankfulness. We’re thankful for our garden comrades, and for the ability to put a face to a name, and a plant to a friend — whether or not put we’ve actually seen each other’s mugs in person. —TH 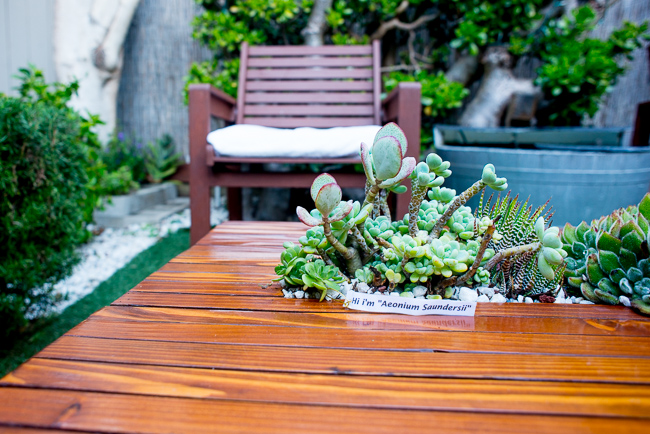 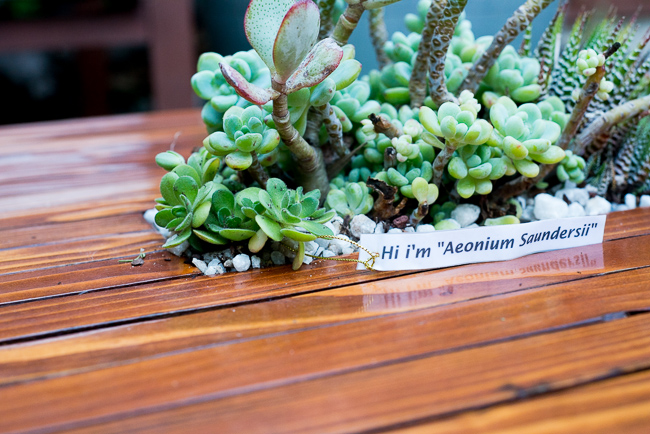 Ryan planted the Aeonium saundersii in his Outdoor Living Coffee Table #1. “Saundersii is so fun,” Warren says. “When he gets hardly any water he closes up into tight little ‘fists.’ When he starts getting more water, he opens up and starts growing! I thought that was such a neat survival skill for a plant.”