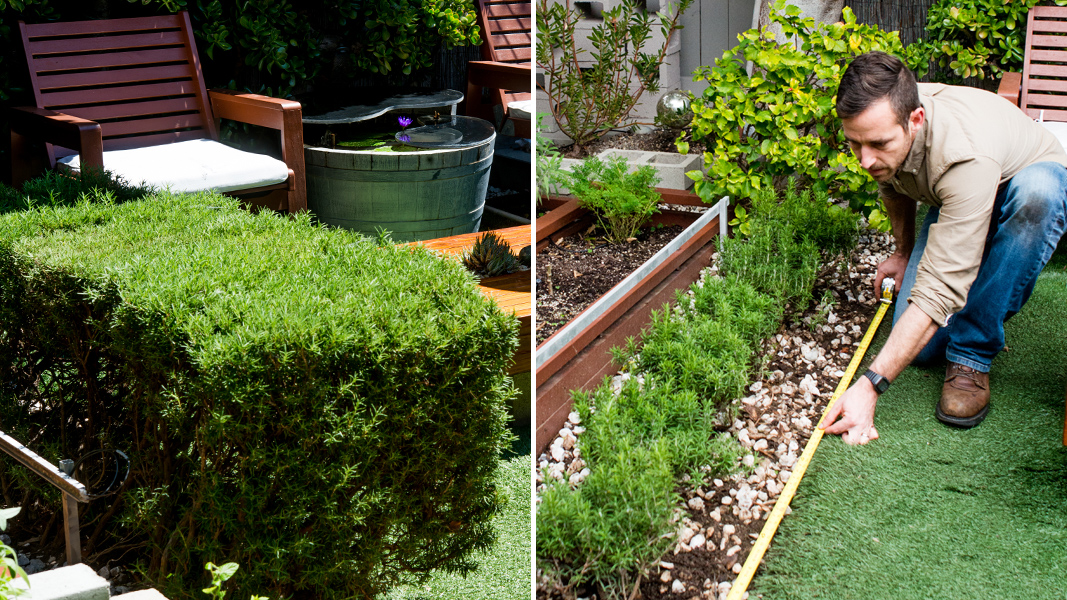 Last week, I graduated from grad school. And I credit my MFA in large part to…our rosemary.

Out of all the fragrant flora Ryan and I grow, rosemary’s aroma is our favorite. (The blossoms of our orange tree come in a close second.) During writing sessions I would take breaks to rub my face in our row of Rosmarinus officinalis, the needly herb that emits a savory, delicious, brain-tickling scent. The plant’s fragrance has been linked to improved memory performance for ages; in art, Ophelia makes the connection in Hamlet, and in scientific studies like this one, results have been “remarkable.”

Our own row of rosemary grows in front of our outdoor movie screen and lends charming shadows to Grateful Dead concerts, and it’s been bringing us fragrant memories since we planted it in late 2008. Our hedge became a boxy topiary in 2011, after Ryan built the outdoor movie theater and the rosemary started blocking the projection. We sheared the tops and sides flat and fell in love with the look and it became a staple of our garden’s design. You know the avatar at the top of this browser tab and on our logo mug? Clippings from our rosemary hedge that we scooped into an ‘h.’

It took us a few tries to create final the form for our avatar back in 2013.

The good times came crashing down a few months ago when a middle plant in our hedge started dying. Root rot caused a large chunk of our rosemary to go fully woody, creating a brown blotch sandwiched by blocks of green.

But first, here’s a brief evolution of our rosemary hedge (and our garden!): 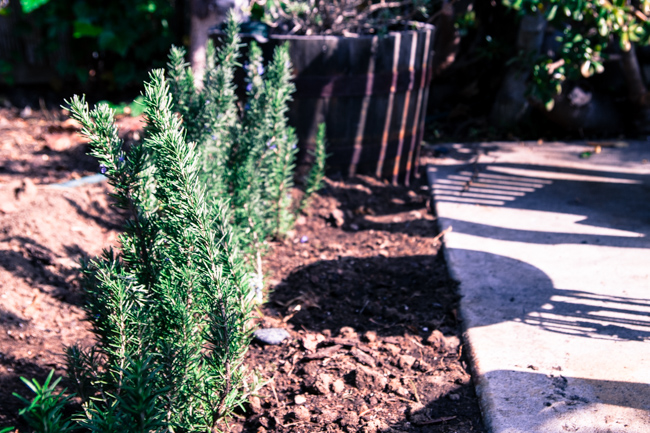 November 22, 2008. When we first planted four plants, we had no idea that we would eventually make them into a topiary. 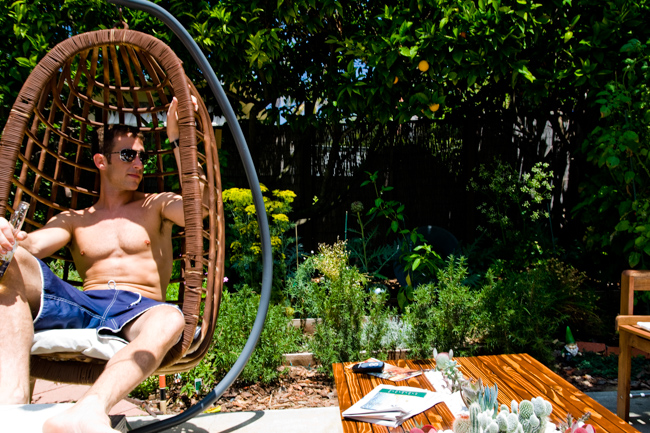 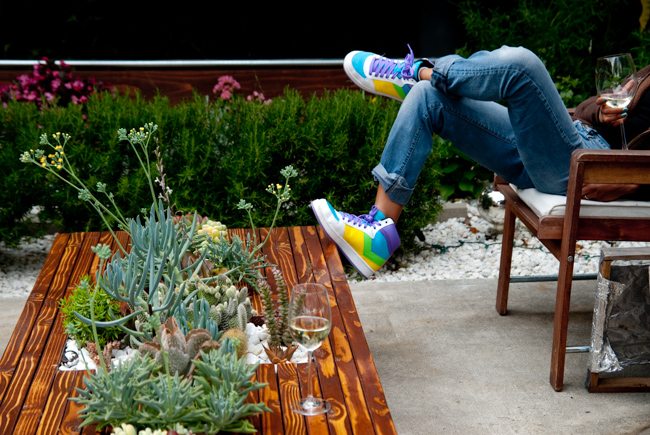 June 2010. The plants are nicely filling in the gaps. And my nails match my jeans. 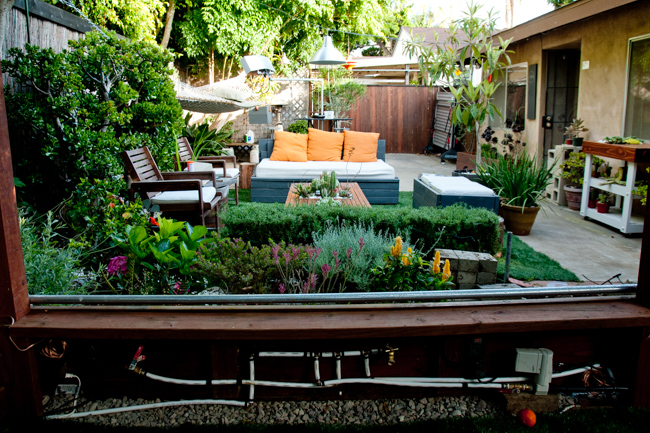 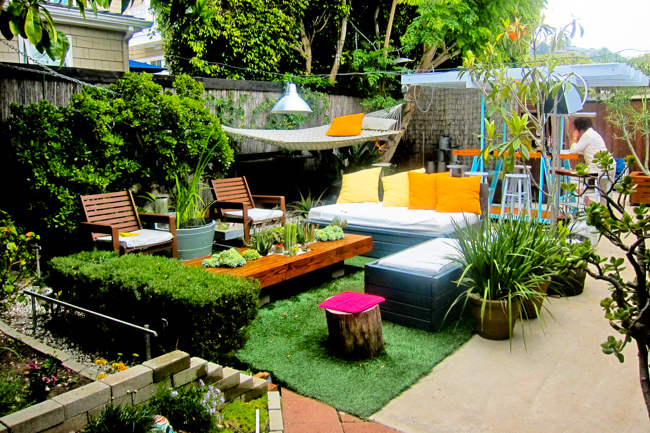 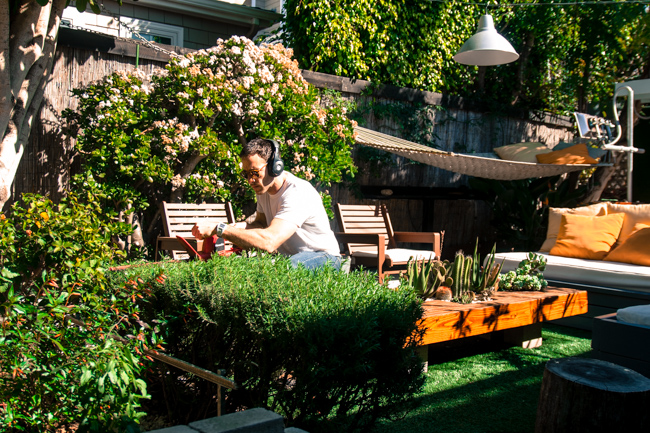 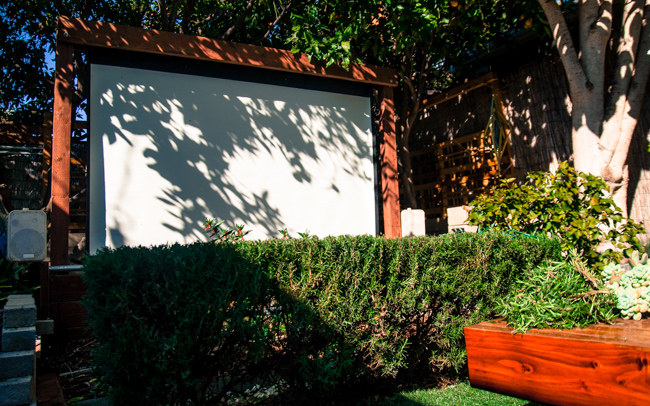 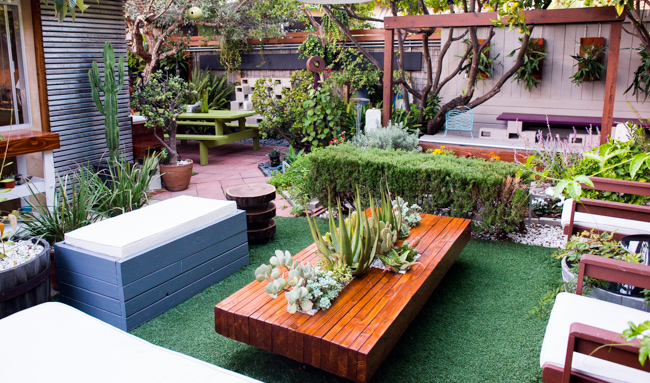 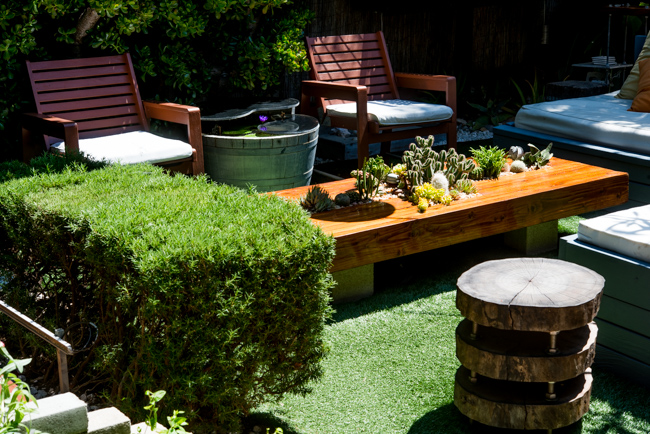 May 2015. This is one of the last photos we have of our hedge before root rot set in. 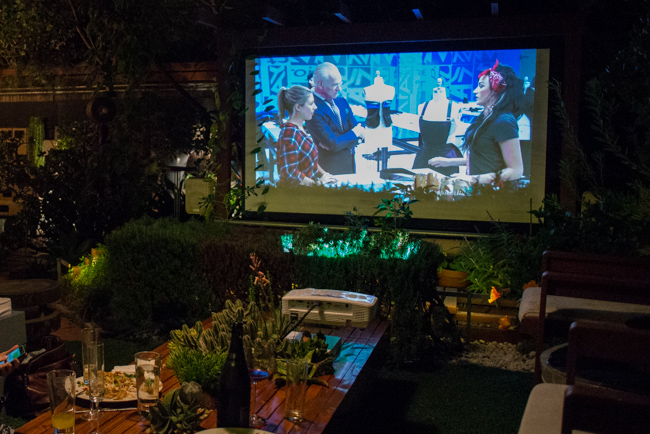 October 2015. Notice the rosemary shadow at the bottom of the projection, which we actually kind of dig! (BTW we’re watching Project Runway, and that’s Ryan’s cousin Kelly on the show!) 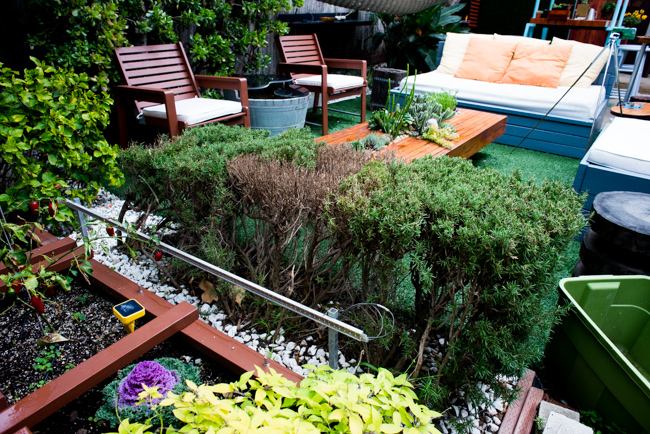 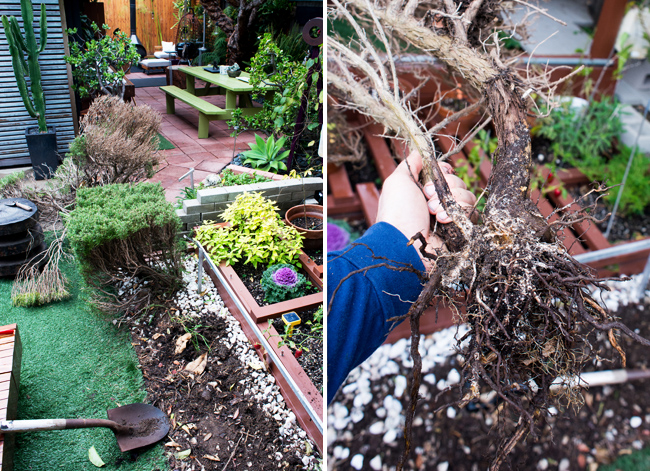 Root rot (Pythium or Phytophthora) seems to have killed one of our plants. This fungal infection is normally caused by poorly draining soil. The soil was a bit soggy and the roots were darkened and waterlogged. 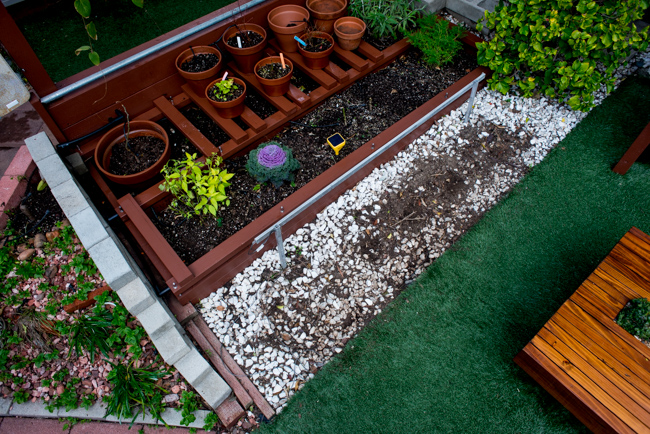 We instantly felt a craving for more rosemary! 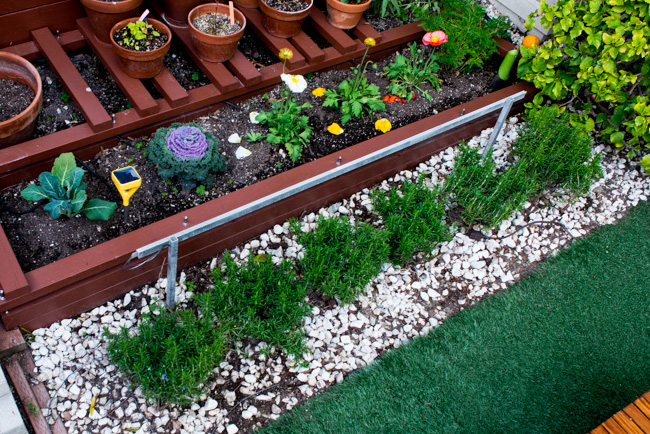 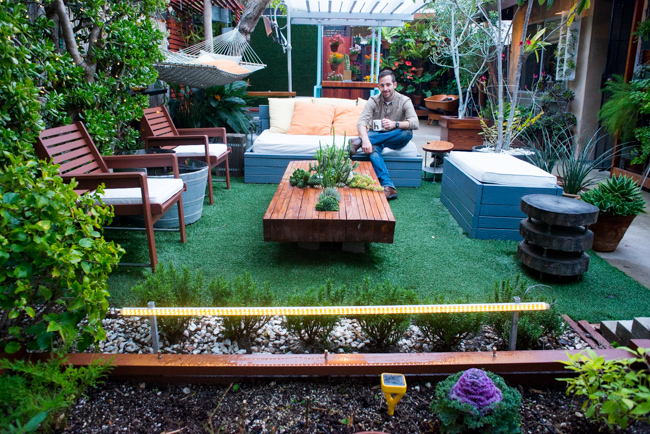 This past weekend. A fresh start!

Massively bummed about this, we pulled out the whole hedge last month. We even entertained replacing it with a bench or even a different species! That is, until we realized this idea was completely nuts because there was no way some other piece of furniture or plant was going to live in rosemary’s rightful home.

We would have to start small again. Like the row we first planted more than seven years ago, our new rosemary plants are so, so tiny and seem so far away from the unified hedge we — stage-parenting gardeners that we can be — envision for them. But they’re fresh, and they seem to be prospering now that the cause of the earlier root rot has been addressed. Poor drainage: the usual suspect. Amending the soil with sand and pumice sent to us by General Pumice Products (sustainably mined in Olancha, CA), Ryan has improved drainage, and now our Rosmarinus officinalis looks ready to rock its south-facing plot.

Check out how we restarted our hedge in the photos below. Here are our tips for making  your own rosemary hedge:

1. Source the rosemary. Our first go-round was Rosmarinus officinalis ‘Tuscan Blue,’ but this time we chose ‘Blue Spires.’ Both varieties are readily available at your local nurseries or big box stores, and grow about six feet tall if not trimmed back. The ‘Tuscan Blue’ variety’s leaves are a bit wider than the ‘Blue Spires’ and the flowers are deeper blue. If you are looking to shape your rosemary into a topiary, these are probably your best two varieties.

2. Rosemary is hardy down to zone 7 and does take well to temperatures below 20 degrees Fahrenheit. Not a problem for us in zone 10b, but if you are below zone 7 you should consider making a hedge with container plants and bringing them into a bright indoor location over the winter.

3. Amend your soil with sand and pumice. Both will assist with drainage while the pumice will help retain some moisture, oxygen and trace minerals to promote healthy roots, which will be less susceptible to root rot. Rosemary can be grown in clay loam to sandy soil, but plants are more likely to develop root rot in clayey soil if overwatered.

4. Deep and less frequent watering is best. We do not recommend drip irrigation. Instead, water with a hose every couple of weeks when the soil is almost completely dry and the plants are young. After established, rosemary is drought tolerant. In fact, we rarely watered our first hedge at all.

5. To make a dense hedge that combines into a single low hedge, space plants 12 to 24 inches apart. Let plants overlap and grow a few inches above desired height before shaping.

After we suspected a fungal infection we made sure to remove the old soil around the effected area before preparing the new bed. 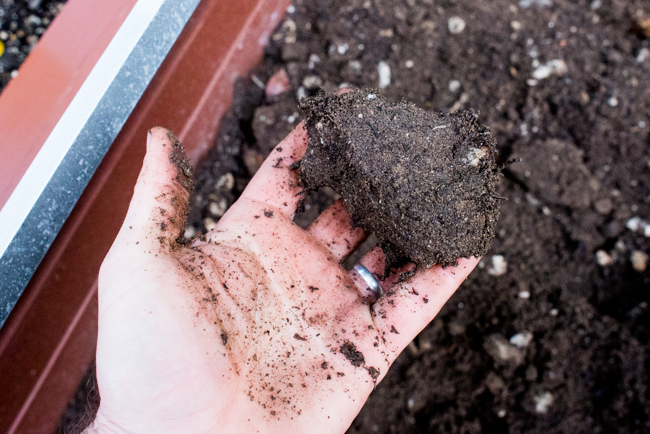 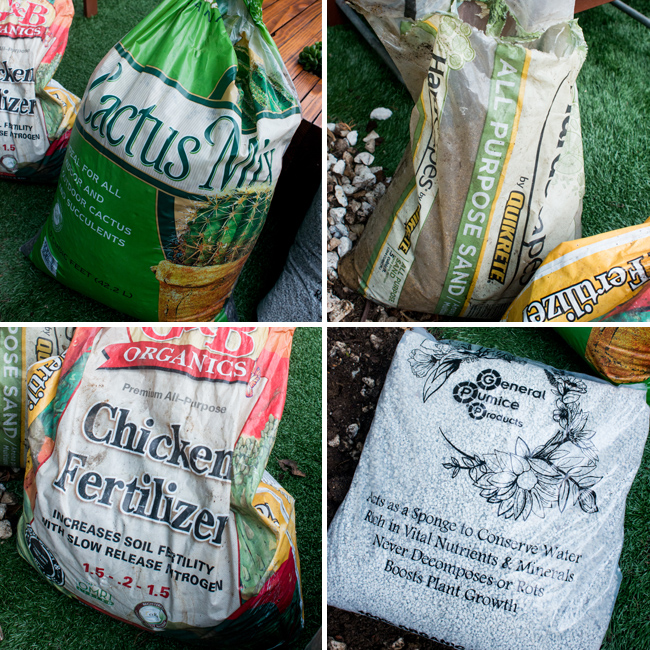 …So we amended our existing soil (about 12 inches deep and 12 inched wide) with some cactus mix, chicken fertilizer, sand and pumice. This mixed amendment would give the new plants nutrients, drainage and oxygen needed to establish healthy roots. 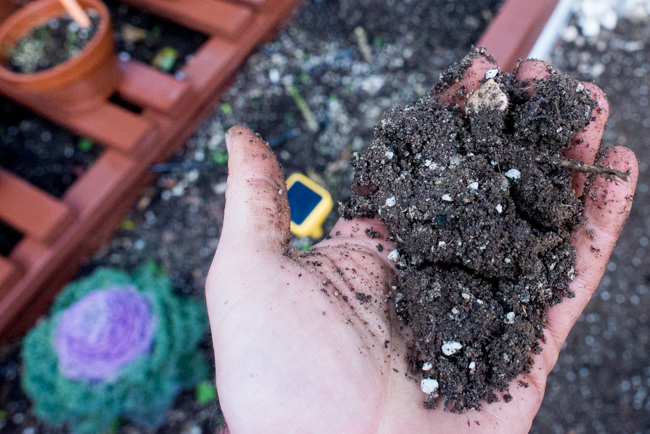 After mixing the soil thoroughly, we had a sandier mix that will provide better drainage. The pumice will help keep oxygen in the oil for healthy root establishment. 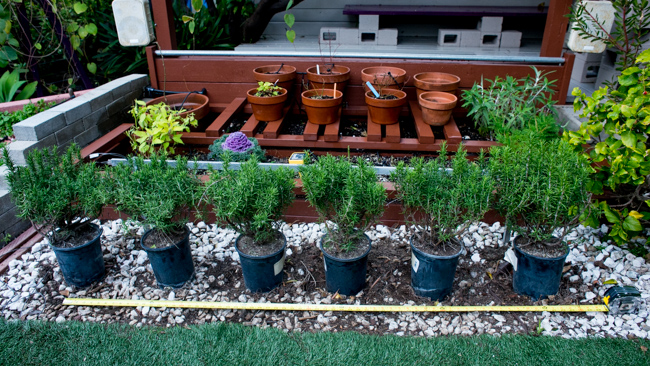 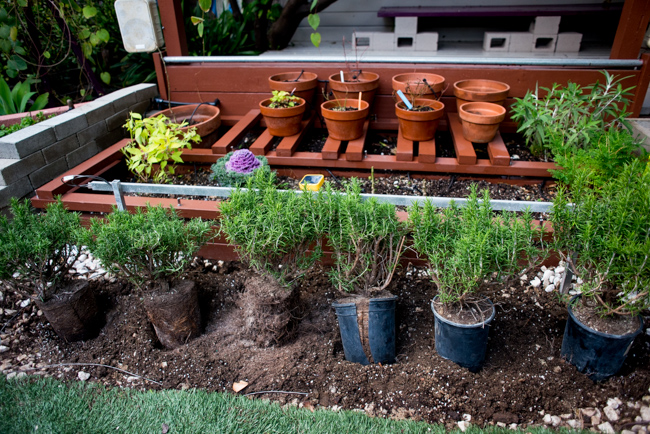 The plants were a bit root-bound, so it was extra important for us to loosen up the rootballs before putting them the ground. 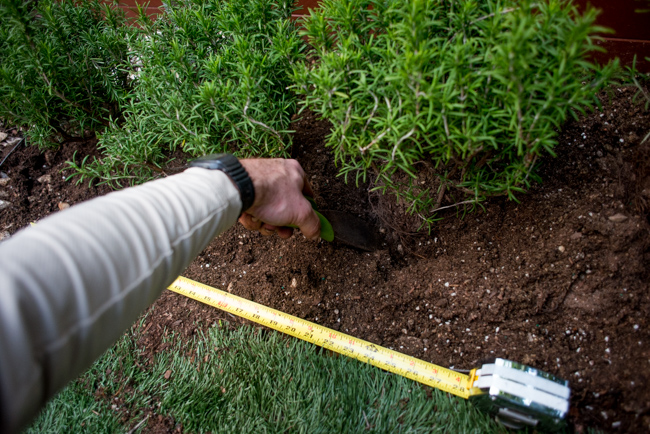 With the soil still quite loose, we were able to dig the holes with a hand trowel and space our plants easily using a tape measure. 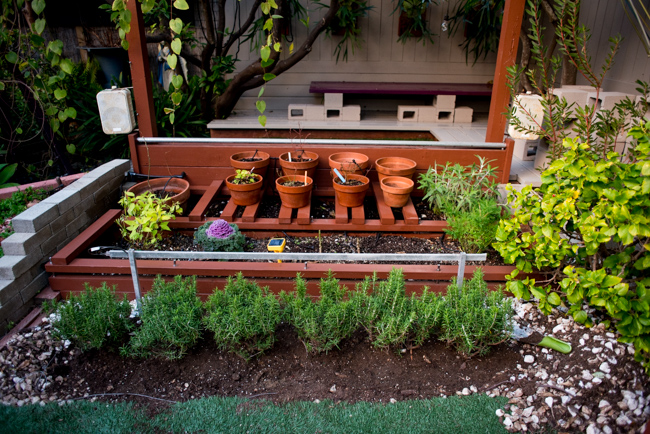 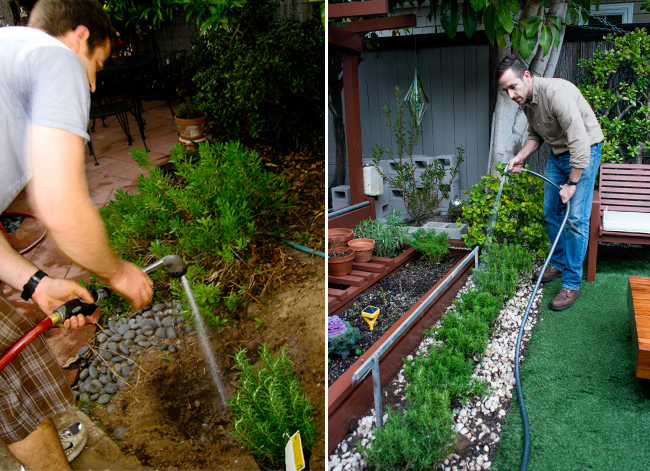 Back in 2008, we were still quite new at gardening and didn’t take the time to prepare a good soil bed. Luckily, rosemary is quite forgiving, and our plants survived for seven years. This time, we took more time in preparing the soil and thoroughly watered after planting. We’ll water again in about a week when the soil is dry (if there is no rain). 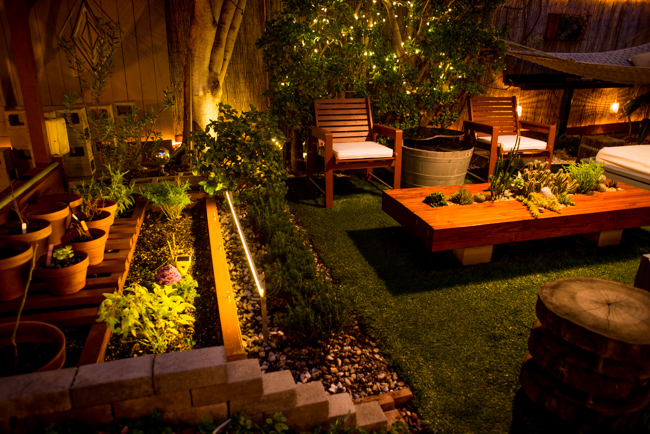 By evening, the project was complete and the garden felt whole again. 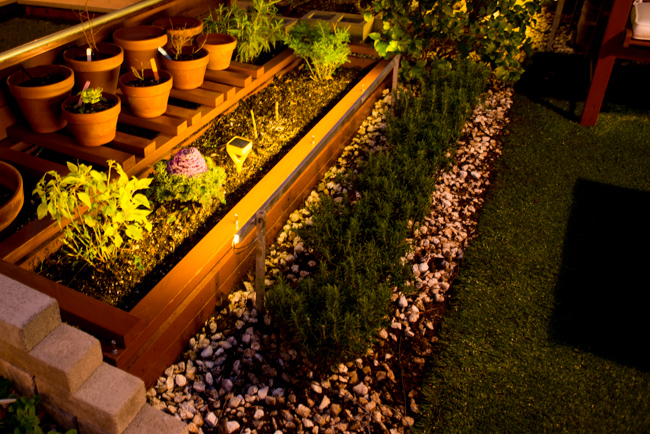 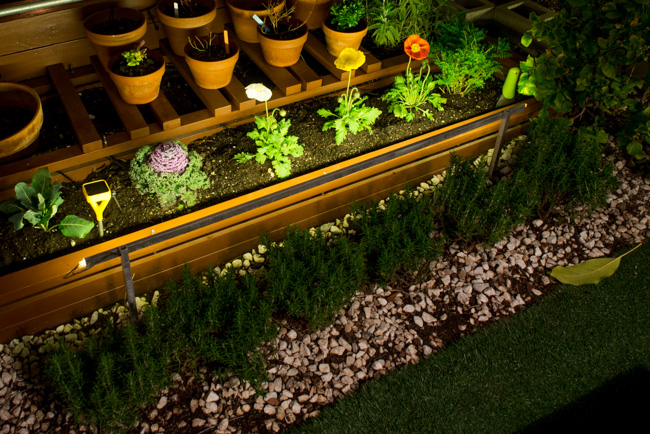