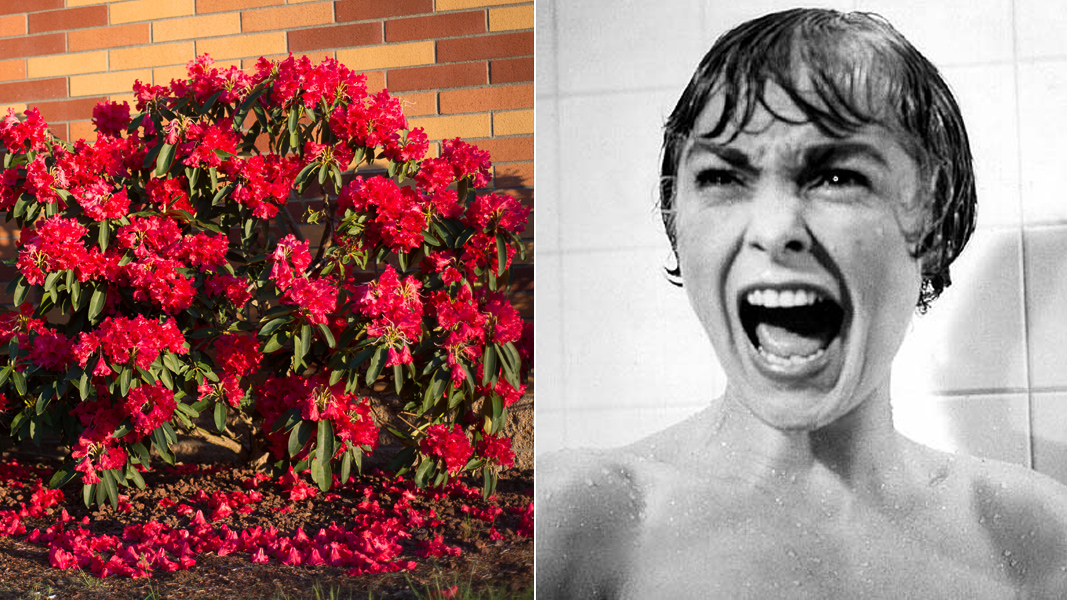 Plants bring us bushels of joy every single day, but around this time of year our thoughts turn to the flora that terrify us. That’s right: spooky plants. And we’re not just talking about the sight of our aphid-ravaged milkweed or a fast-moving touch-me-not. In honor of the Halloween season, we bring you these 11 plants that remind us of classic scary-movie moments.

1. Purple Shamrock and Dracula. Thanks to the shape and color of its leaves, Oxalis triangularis — native to Brazil and often grown as a houseplant — resembles flocks of bats like those in the 1931 classic bloodsucker. (The foliage even gradually opens and closes in response to light levels. You could say it flaps its wings at night.) Be sure to give your purple shamrock light shade and moist, well-drained soil — or else you-know-who will come find you. 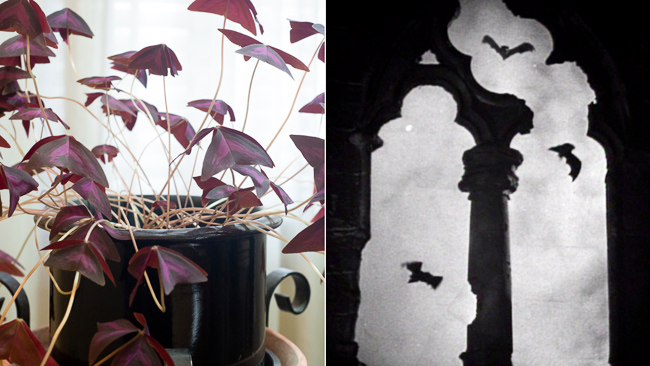 2. Monstrose totem pole and Ghostbusters. A lumpy green mound of succulent vegetation, Lophocerus schottii is one-half Easter Island Statue and one half Slimer, the ghost made of ectoplasm from Ghostbusters. We keep our potted monstrose totem pole in a sunny spot outside and water it once a month, something that has kept us in this green blob’s good graces. 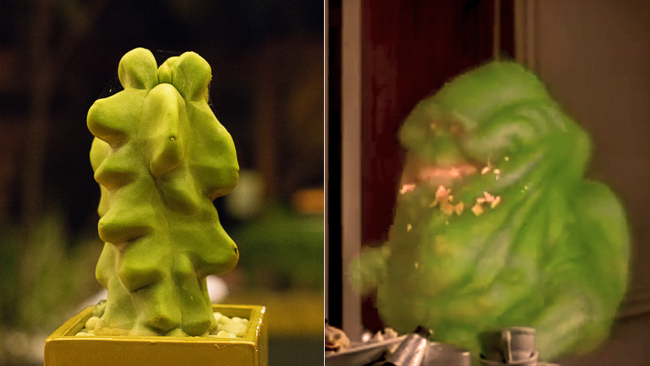 3. Folotsia grandiflora and The Host. Don’t let the prostrate habit fool you. The waxy, scrambling F. grandiflora we snapped at Ganna Walska Lotusland recalls the sea monster that raised a ruckus in the 2006 South Korean film also known as Gwoemul. 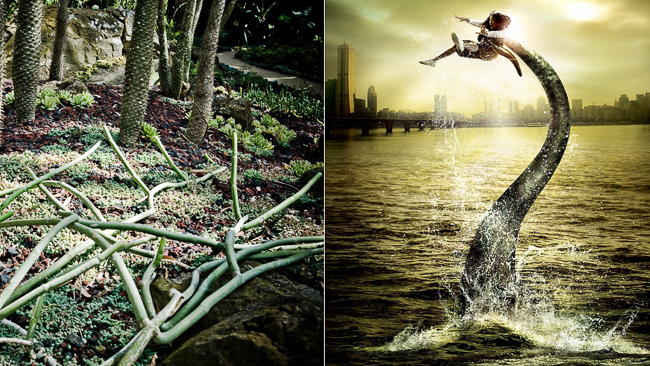 4. Rhododendron and Psycho. The iconic shower scene is so vibrantly realized that sometimes we forget it’s in black-and-white. Janet Leigh’s blood in the 1960 Hitchcock heart-thumper was reportedly represented by Bosco chocolate sauce; it also recalls the violent hemorrhaging of scarlet Rhododendron macrophyllum shrubs in late spring, like this one spotted in Everett, Washington. 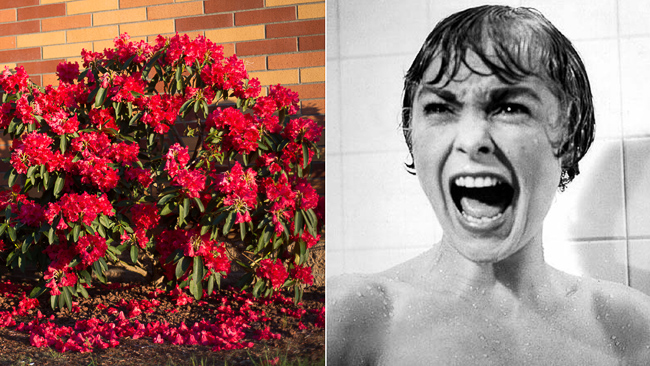 5. Spanish dagger and Edward Scissorhands. Sure, Yucca gloriosa looks stylish and appealing from afar. But then it invites you closer…no, closer…until….it stabs you right in the eyeball. Its leaves are denticulate and acuminate, meaning they are finely toothed and tapered to a sharp point, respectively, just like the lethally snippy fingers of our favorite Tim Burton protagonist.

The 1990 gothic romance might not be a scary movie per se, but who can resist Johnny Depp creating whimsical topiary? 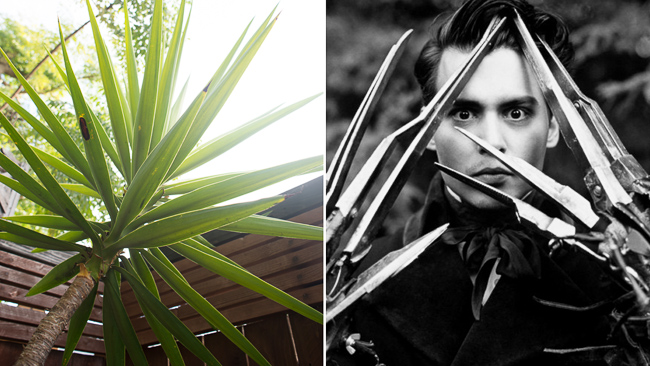 6. Old man cactus and Abbott and Costello Meet the Mummy. Columnar with woolly white hairs and spikes sharp enough to draw blood, Cephalocereus senilis resembles another type of old — very old —man: the guardian of the Tomb of Princess Ara who terrorized Abbott and Costello in 1955. This cactus also evokes zombies and the bedsheet ghosts of the Peanuts gang, but in our opinion, this plant yells “mummy” the loudest. 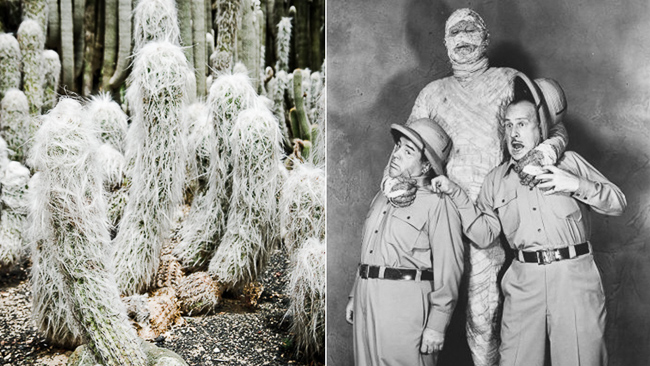 7. Carrion flowers and Resident Evil: Afterlife. Are we the only ones who think that the movie’s tentacled-mouthed zombies resemble the flowers of the Stapelia genus? The blooms even smell like rotting flesh. We found them — the plants, not the  zombies — at the Desert Botanical Garden in Scottsdale, Arizona. 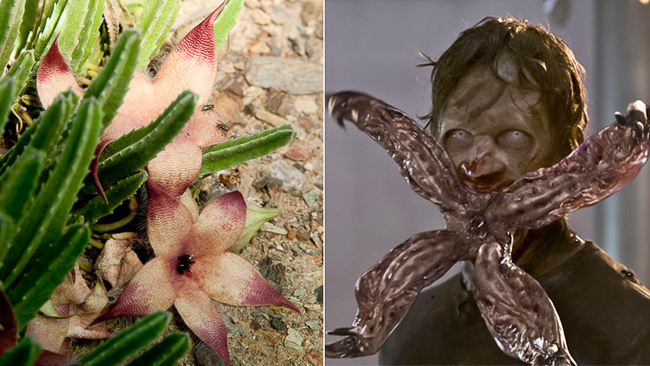 8. Weeping conifer and The Addams Family. It was the 1960s TV series (rather than the 1991 movie) that came to mind when we encountered this shaggy specimen inside the world-class conifer garden at Evergreen Arboretum and Gardens in Everett, Washington. Even though we aren’t certain about the species (could it be a hemlock?) we are positive that this tree is an exact match to shaggy Addams relation Cousin Itt. 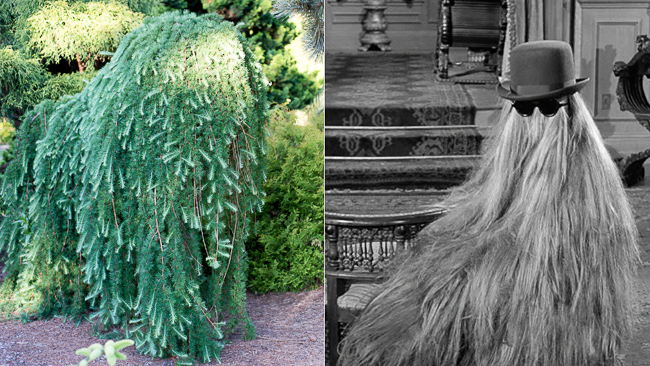 9. Bigleaf maple and Poltergeist. Remember when that knobby backyard tree sprang into action and snatched Robbie through the window? If this Acer macrophyllum grew outside our bedroom window, we would become professional insomniacs. 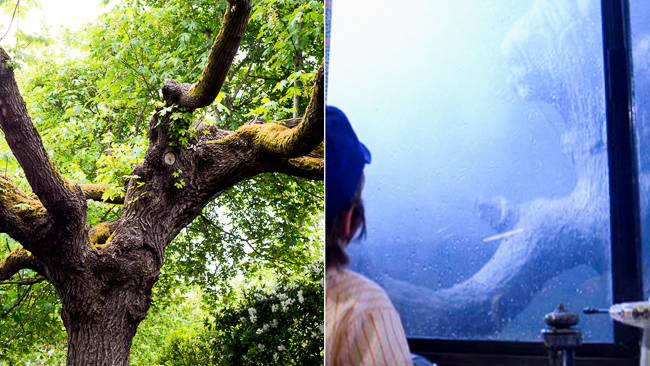 10. Cleistocactus and Tarantula. We don’t know what’s scarier: A Cleistocactus whose faded flowers resemble tarantulas like the giant one from this 1955 low-tech thriller, or the debunked urban legend about the cactus that gave birth to legions of baby spiders. 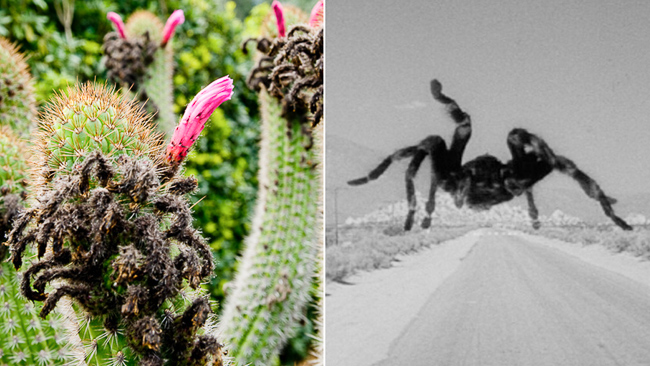 11. Venus flytrap and Little Shop of Horrors. We would be remiss not to mention the scariest plant-centered movie of all time. It is indeed spectacular to watch a Dionaea muscipula clamp down on its insect prey IRL the way Audrey II did opposite Rick Moranis in 1986. Before we committed to our Nepenthes carnivores, we grew Venus flytraps inside boggy, homemade terrariums — only occasionally feeding them droplets of our own blood. —TH 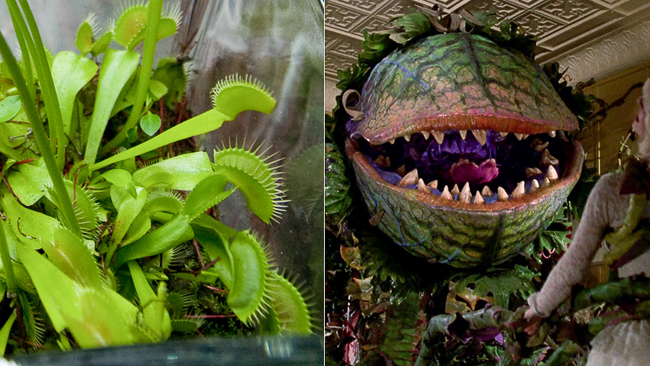