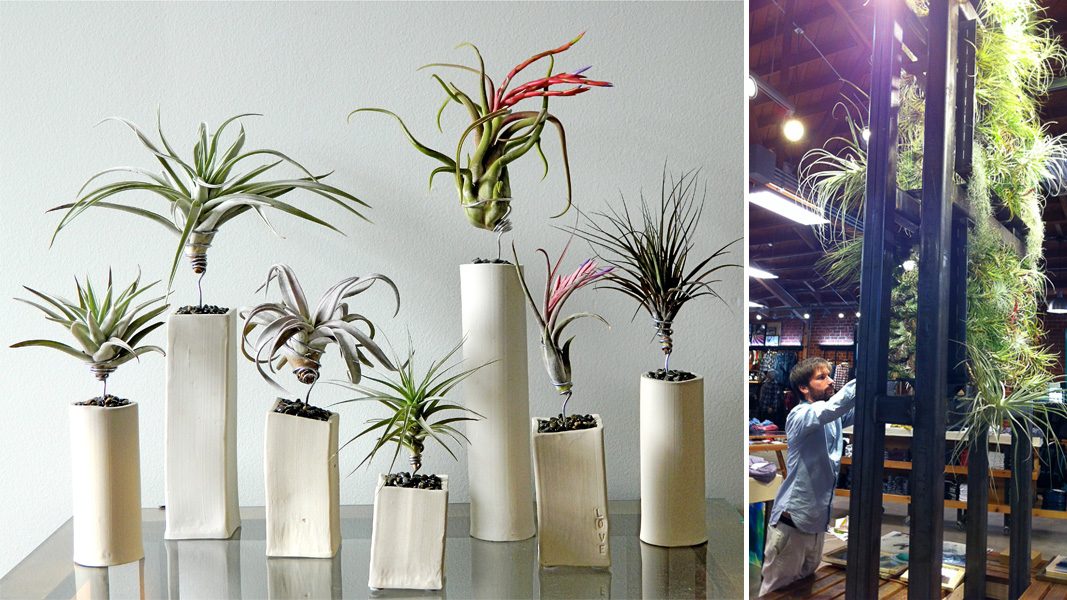 “There’s something about airplants that’s charismatic,” says Josh Rosen, the man behind L.A.-based Airplantman. His minimalist designs let tillandsias’ freak flags fly. “They have a personality. Like the Tillandsia bulbosa — they look like they can get up and walk away.” 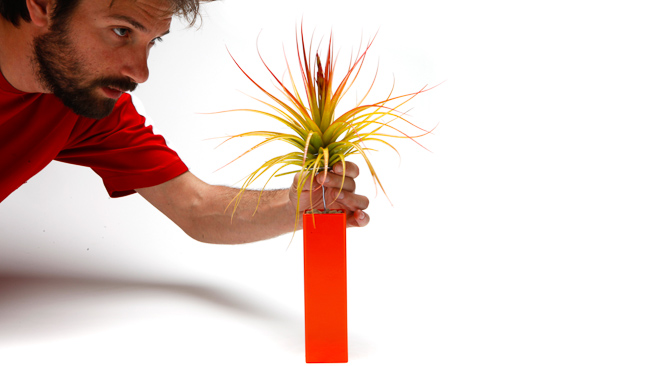 Josh Rosen places a tillandsia atop of one of his minimalist AirplantVessels.

These days, airplants (or air plants, whichever you prefer) are everywhere: Inside glass orbs at design shops. At hardware stores. On eBay.

We first encountered Airplantman Designs last summer during our visit to outdoor living boutique Ilan Dei in Venice. On the AirplantFrame, tillandsias form a vertical garden by nestling in a grid of stainless steel cables hand-strung within a powder-coated aluminum structure. In another inspired product, the AirplantVessel, airplants hover in midair — aided by a hand-wrapped wire holder — above artisan-made wood or ceramic bases. Prices start at $35 for the vessels and $90 for the frames at Airplantman’s online store. You’ll even get an actual tillandsia (or in the case of the frame, a starter kit of five) to start you off. 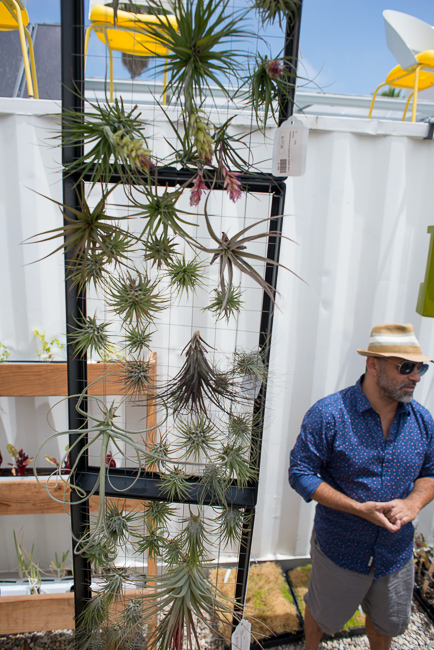 The AirplantFrames we spotted at Ilan Dei earlier this year. (Photo by Ryan Benoit.) 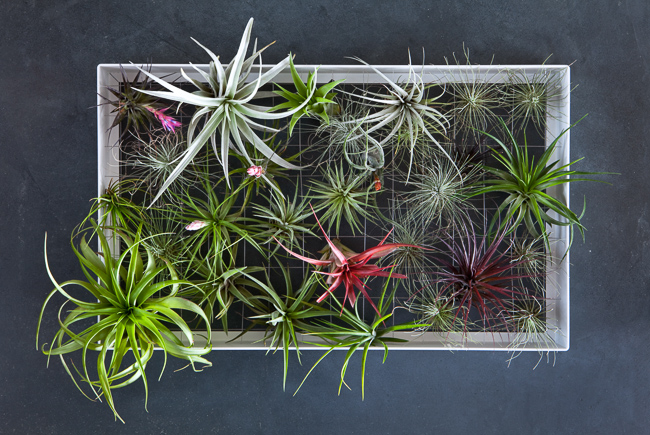 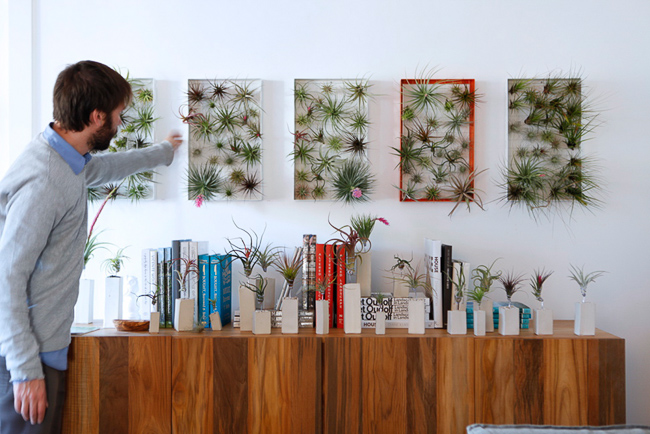 Customers in the U.S., Sweden, Israel, Germany, France, Italy, Japan and across South America are clamoring. Airplantman Designs are graceful, minimalist yet warm, and, contrary to those aforementioned glass orbs, they allow for circulation around the plant — essential if you want it to thrive.

Raised in Central New Jersey and an Angeleno for the past eight years, Josh is a landscape architect, artist and horticulturalist. We were excited to chat with him by phone; below, he names his favorite species (heads up for fragrant airplants, y’all!), gives care tips, and tells us about his watery inspiration. 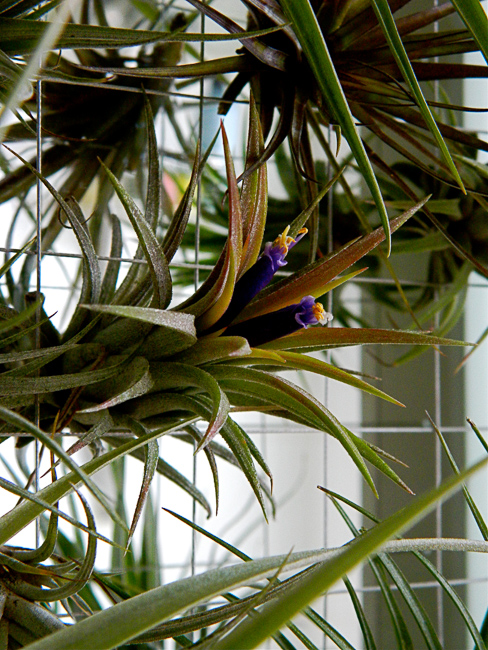 My day job — I work as a landscape architect at Mark Tessier Landscape Architecture; my style is modern eclectic with a botanical focus. We [have] lots of varied clients and environments — from rooftops to residential, multifamily, high, low. It’s very inspirational to drop in so many design sources.

[Also], Amano Takashi International underwater aquascaping and ADA (Aqua Design Amano) aquariums. These are Japanese gardens that are underwater and are really, really inspirational and amazing. It’s the antithesis of the treasure chest with the blue gravel and the little fish with the bubbles.

It requires a whole kit of scissors and tweezers — you can reach down in to kind of manicure the plants to create the layout. It was an obsession for a couple years — I was ranked #766 out of over 2000 entries from 63 countries in 2012. It’s showed me how striking and unbelievable it is when you get this snapshot of nature in perfected form that doesn’t look over-manicured or constructed, and that inspired some of my work with airplants. 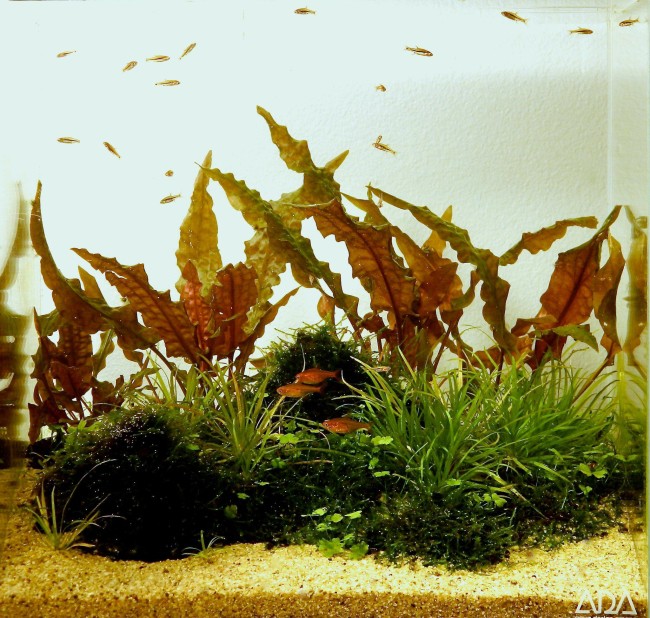 Underwater gardens have been ‘an obsession’ for Josh, who says they inspired some of his airplant work.

Why did you become Airplantman?

I basically wanted to elevate the display and enjoyment of airplants, to a point that shows how incredible they are, and to educate people on the proper way to care for them — and make it easy for them to do so.

[It’s] nature elevated, taking the most amazing plant and stripping away everything around it, and displaying it in a more minimalist, less-is-more way. You can really showcase what’s special about them with a clean modern design. 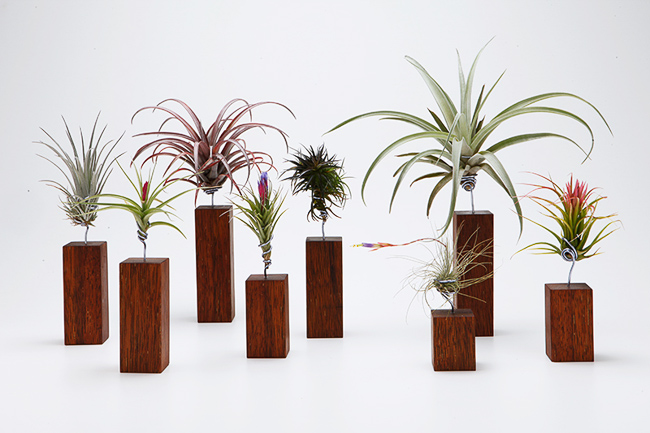 Epiphytes are all the rage. Why are airplants striking a chord with people right now?

People are really getting into plants to bring green into their lives, a call back to nature, which is wonderful. Airplants were a big thing back in the ’70s — they were ubiquitous. People would glue them into seashells and put them on fridges. Which wasn’t great for the airplant or for design.

There’s something about airplants that’s charismatic. They have a personality. Like the Tillandsia bulbosa — they look like they can get up and walk away. People relate more to plants that look like they have a personality. There’s something anthropomorphic about them. They’re little creatures. The fact there’s so many different types — that’s what hooks me.

How many varieties there are. It’s really fascinating; they are among the most recent plant families to evolve, and one of the more diverse.

And I think people seem to be amazed they grow suspended in air. When I show them how I’m displaying them, how my products display them, there’s always this moment of, “Really? Are you sure?” They have a hard time wrapping their minds around the fact they just hang out in the air. In Mexico, they’re just growing on power lines — a very cool example of nature colonizing manmade stuff. 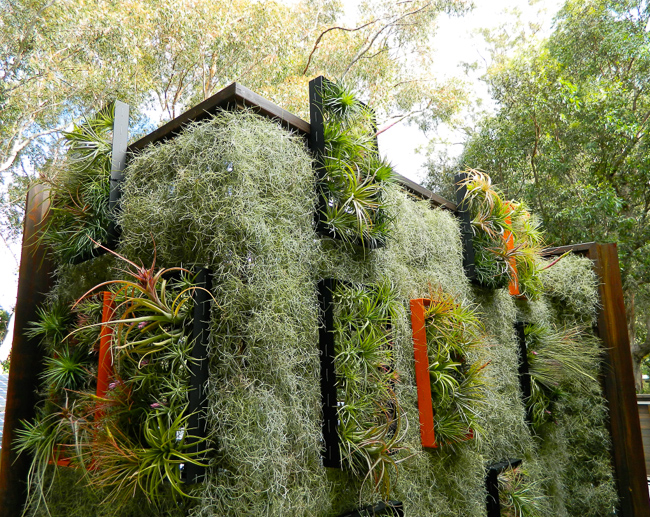 What was your introduction to them?

I visited a nursery in Hawaii while moving around in college. I was a plant collector before Hawaii, [but] that was just where I first saw airplants and was inspired to collect them instead of my previous challenge of moving with heavy potted plants.

The collector in me was drawn to an easily scaled lightweight kind of plant — meaning they’re not massive, and they work well for an apartment dweller, someone without a garden at all. You can create a whole indoor garden for yourself that doesn’t require soil or a lot of space, and are easy to move with.

Once you start collecting them, you’ll get more and more because they can grow anywhere. There are almost too many options: What do you do with all these airplants?

I wanted to design a way that shows how cool they are, but also gives them what they want: air, circulation, making it easy to water them. 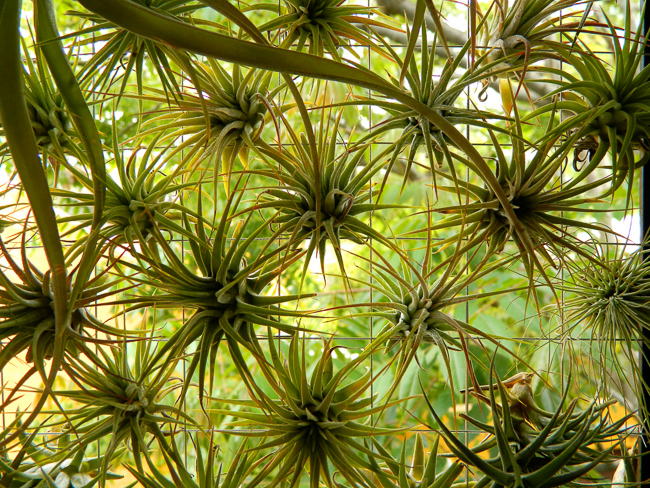 Speaking of which, what do you recommend in the way of sun and water?

In general I recommend watering by submerging in water for a few hours once a week. If they’re outdoors, you can spray them depending on your climate a few times a week. [Otherwise] you can fully submerse the plant, allowing the leaves to fully rehydrate. They like bright filtered sunlight. If you’re by the beach, it can be more direct.

How did your AirplantVessel come about?

The tabletop AirplantVessel came out of a restaurant that wanted centerpieces. It involved hand-wrapping a wire holder and sliding it into a base made locally by artisans.

The plant is suspended two inches above it, so you get a sense the plant is literally hovering above the base. It’s especially fun because of all their different sizes — you can really showcase the variety and have your own little alien family. 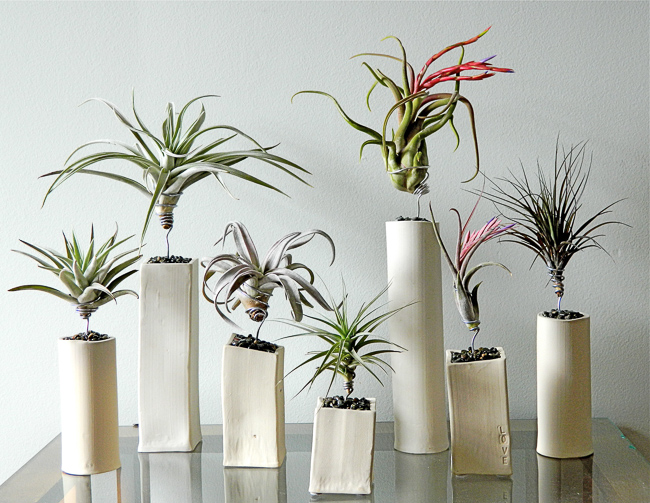 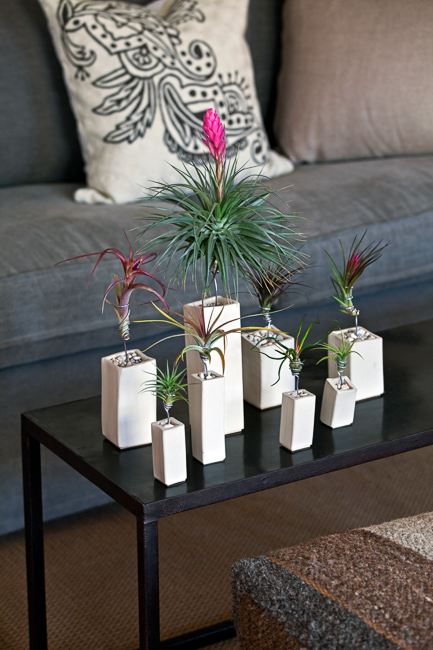 Vertical gardens — everyone loves them, but when you are putting soil vertically, there’s weight and irrigation to deal with. And it’s tricky to replant. Airplants are made for being in vertical gardens — they don’t need any soil.

AirplantFrames are made from powder-coated aluminum made in California. The stainless steel mesh is totally waterproof. It has a minimalist, modern feel to it. You slip the plants into it, and the leaves secure the plants in place. If placed in front of a window or outside they can act as a semi-transparent screen and have light and air pass through. 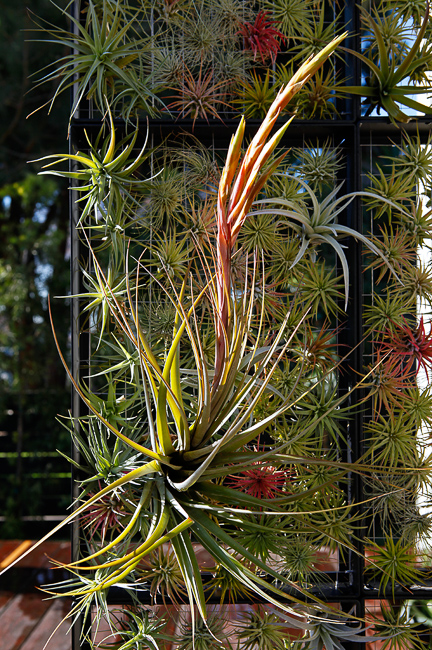 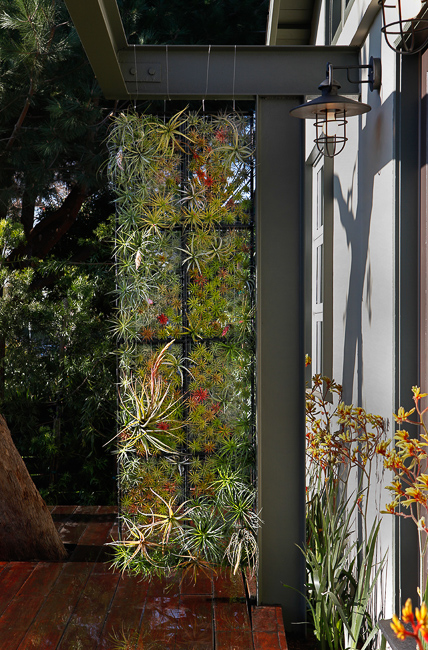 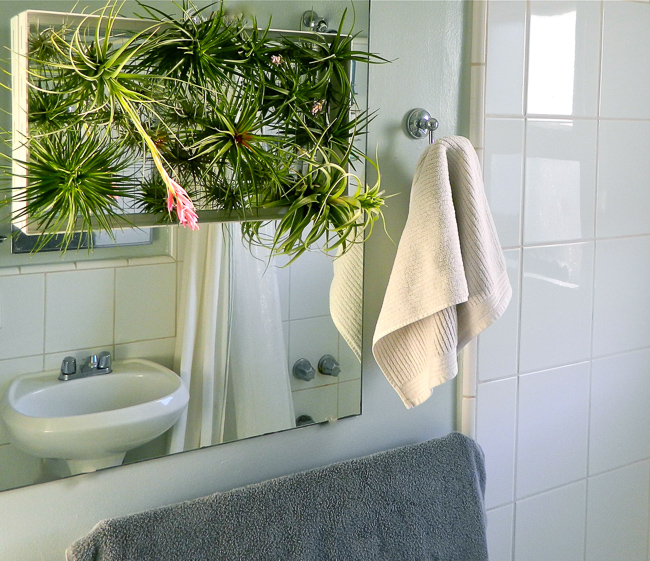 We know it’s like picking children, but what are your favorite airplants?

I love Tillandsia caput-medusae — it’s so cool, and such an evocative species. I love how the arms curl when they dry out, and straighten out when wet.

Tillandsia duratii is really wonderful — and fragrant. There are a number of species of air plant that have the most intoxicatingly beautiful scents.

Really?! We’ve never sniffed a fragrant airplant before. What does it smell like?

If I do free association, it has something in common with jasmine and gardenia but with something different in there. It’s definitely a sweet, tropical, intoxicating fragrance. 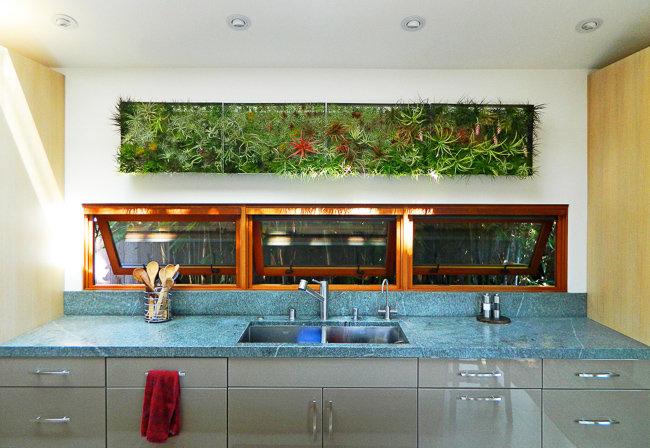 Tillandsia straminea can be enormous, a couple feet across. I have one that’s starting to bloom now: dozens of individual blooms emerge from a central spike over many weeks. The fragrance is stronger at night.

Finally, what are some of your favorite non-airplant plants?

The woolly bush, Adenanthos — it’s Australian, a gray soft look, a big loose shrub that can get quite big. Blue Carex glauca is a low-growing blue grass that’s really beautiful with the wooly bush behind it. I love these subtle color changes that are related but slightly different.

Another one I’ll call out — I keep killing it; it’s notoriously fussy but spectacular — is the silver tree, Leucadendron argenteum. It looks like it’s from outer space. I’m somewhat attracted to plants that look like they’re from another planet.