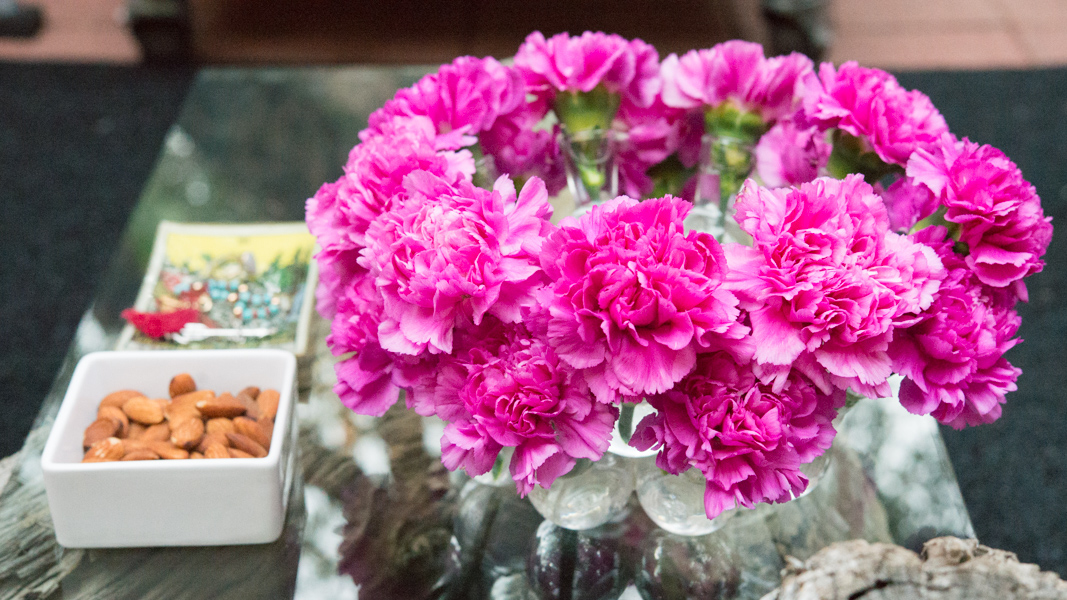 14 Aug In defense of carnations: eating and arranging hot-pink dianthus

Maybe it’s all the unholy dye jobs, or their association with homecoming boutonnieres, or their street-corner ubiquity that turned the pedigreed Dianthus caryophyllus into a pop culture punchline. The plant was famously maligned on Sex and the City (Berger was right; they are making a comeback, Carrie), and then there’s this searing line from Marisha Pessl’s 2006 bestseller Special Topics in Calamity Physics: “…the door slammed and I was left with the carnations. (‘The only flower that, when given to someone, is only marginally superior to giving dead ones,’ Dad said.)” Oof.

Luckily, and justly, the beleaguered blossom is in the midst of a renaissance. Renaissance being the operative word; in cultivation for 2,000 years, the flower has symbolized love, power and divinity across centuries and continents; in 16th century art, for example, you’ll find the plant in religious and bridal portraits. Also, the genus name Dianthus is derived from the Greek word meaning “flower of the gods.” This genus encompasses flowers widely known as “pinks”; carnations are alternatively known as clove pink, and are cousins to the the sweet william, D. barbatus. 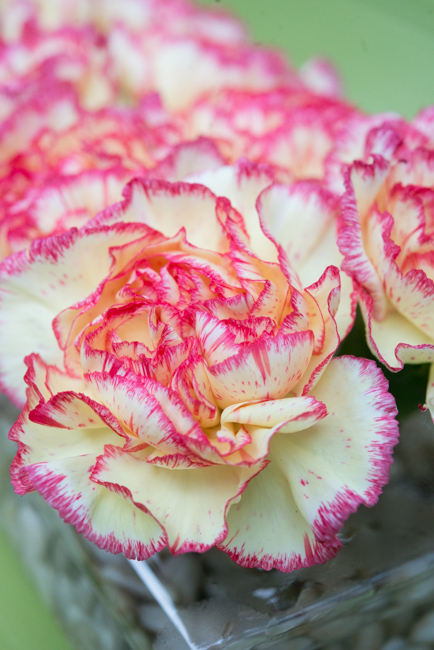 These variegated pink/ivory carnations (Dianthus caryophyllus) have a simple but persuasive charm. 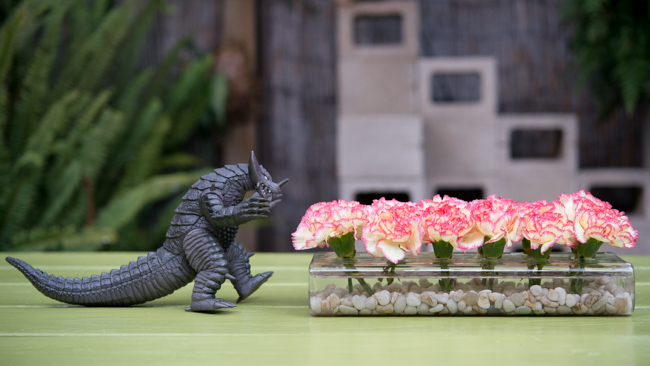 I admit: I used to shun them too. I came to my senses a year and a half ago when, in search of edible blooms, I bought a bunch of tiny pink and red carnations from Sun Grown Organics and ended up appreciating their peppery taste and how they looked frozen in ice cubes and garnishing desserts. This led to the discovery that Chartreuse, the ultra-green, ultra-herbal liqueur, is believed to include carnation petals in its secret list of ingredients dating back to the 18th century. If it’s good enough for the Carthusian monks, I said, fist bouncing off palm, it’s good enough for me.

And — considering the fashion world’s tightening embrace of the “middlebrow,” it’s quite possible that the carnation could become the leading flower of the normcore trend. (There, we said it. We said it and we can never take it back.)

We’ve noticed fashionable floral designers have become more vocal about their love for the carnation. “No shame,” Katherine Farley of Root 75 stated when she listed carnations alongside poppies and ranunculus in her list of Valentine’s Day selections. Just last night, as I was writing this story, two of our favorite design/event Instagrammers, Bloem Hill and Sitting in a Tree, posted shots of dreamy clouds of carnations. “Underrated is an understatement,” reads the caption by Bloem Hill. 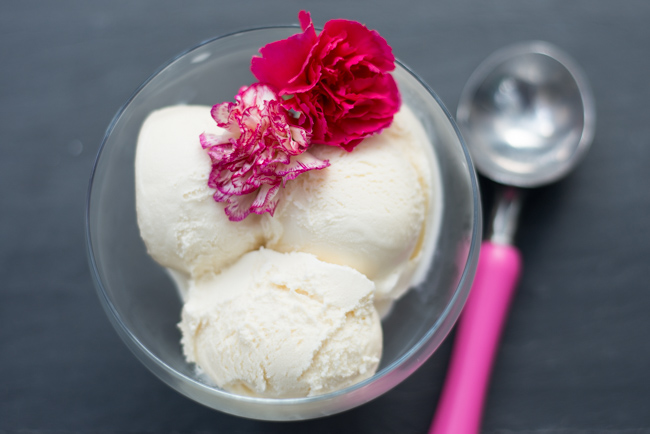 We checked in with noted NYC floral designer Bella Meyer for her thoughts. “I love carnations — the bloom is always so beautiful and so lush,” Bella tells us by phone from her Greenwich Village shop and HQ, FleursBella. Bella is the granddaughter of artist Marc Chagall, whose painting Bella With a Carnation (1925) depicts Bella Meyer’s grandmother holding a Dianthus, influenced by Renaissance odes to love and power.

“It’s a very old flower,” Bella adds. “It’s one of those flowers that has been charged with symbolism from a very early age, much earlier than other flowers — roses and tulips came later. It feels like it’s the mother of all flowers in a way. When the season for carnations comes — there seems to be hundreds of hues. It’s unbelievable. It’s so rich, it’s amazing.” 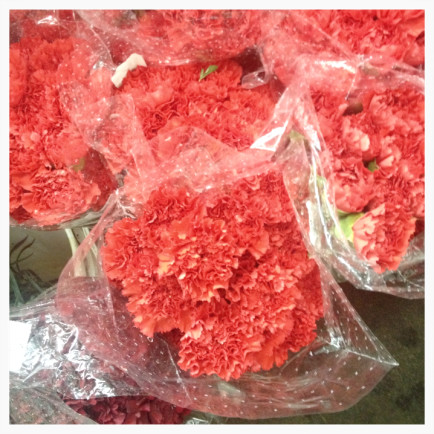 Is it just us, or has the carnation become more ruffly and irresistible since the days of elementary school valentines? These ’60s-style coral beauties we spotted at Wholesale Flowers. 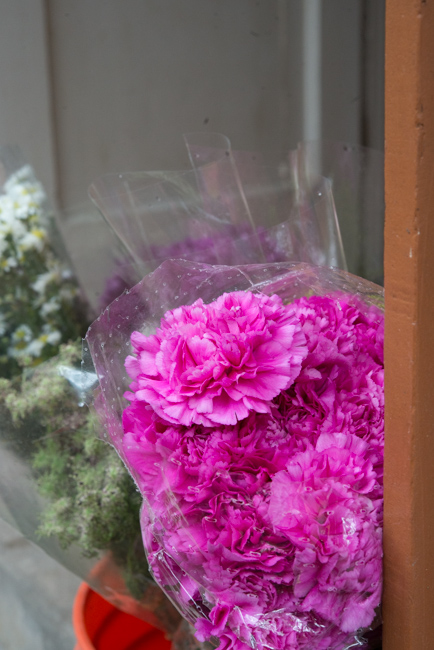 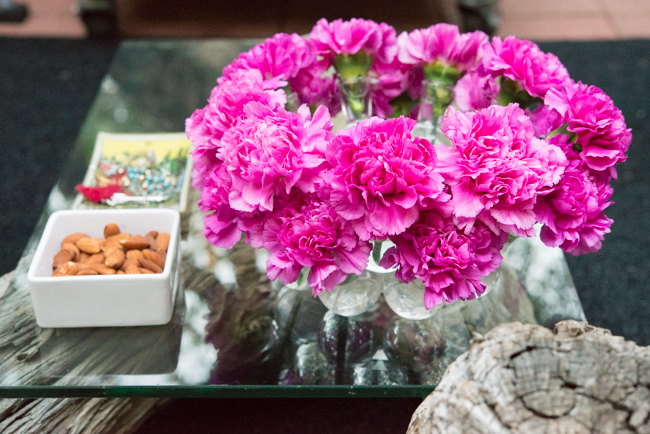 Inside our ‘smores “room,” we placed these hot-pink carnations into a vintage, ring-shaped bud vase. The wreath effect was wonderful.

Bella — also of Art Alive fame! — says her preferred colors can be seen in purple varieties (shades ranging from lavender to deep violet) and flowers that are a gloriously noncommittal mix of pink, peach and orange. We asked, how does she use them in her work? “I really like the bloom, rather than the rest of it,” Bella says. “I like putting them together and creating a very soft carpet. It’s a bit velvety. It’s very sophisticated. People who just five minutes before said, ‘Please, I don’t want any carnations,’ they go into the shop and [say], ‘Oh, what is that?’ ‘Oh, that’s a carnation!’ It’s a flower that needs to be rediscovered, and is being rediscovered.”

The charm of the carnation is felt deeply here on the West Coast as well.

“I am truly onboard with your defense of the carnation!” Larry Anhorn, creative director of the storied and spectacular Adelaide’s La Jolla, tells us by email. “It is a ‘humble flower’ that comes in a multitude of colors and fragrances that span the spectrum from pale and cool to hot and spicy. The spicier their fragrance, the better.”

Looking for more reasons to love (or at least reconsider) the carnation?

Let us count the ways….

– Martha Stewart adores them. She even posted this helpful carnation design tutorial!

– On his lapel Oscar Wilde regularly wore green carnations, which eventually became a symbol for the author, and by extension, possibly an early emblem of LGBT pride. 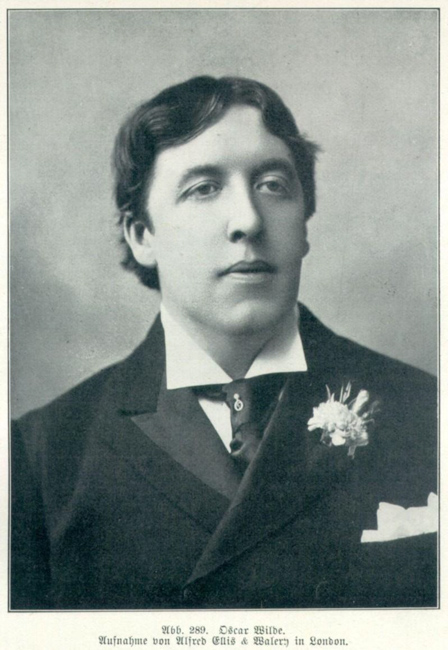 – The new  perfume Oeillet Bengale by Aedes de Venustas evokes not only a flower on fire, but a rose “disguised as” a carnation.

– They are beautiful in bud vases. Here’s how we displayed our vibrant carnations from Wholesale Flowers in San Diego — using a vintage bud vase and the “Garden 12” vase by Vitreum. 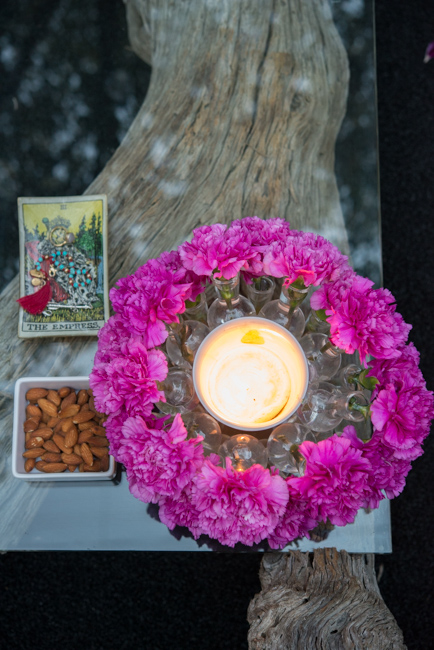 The hot-pink carnations (about $8 for two dozen) in the vintage bud vase are joined by a Bernardaud candle. 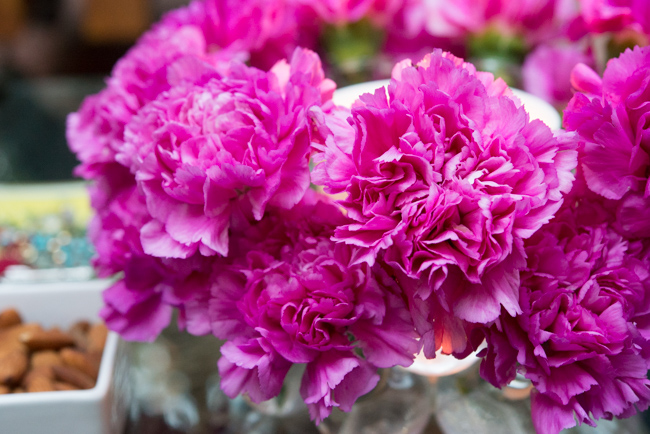 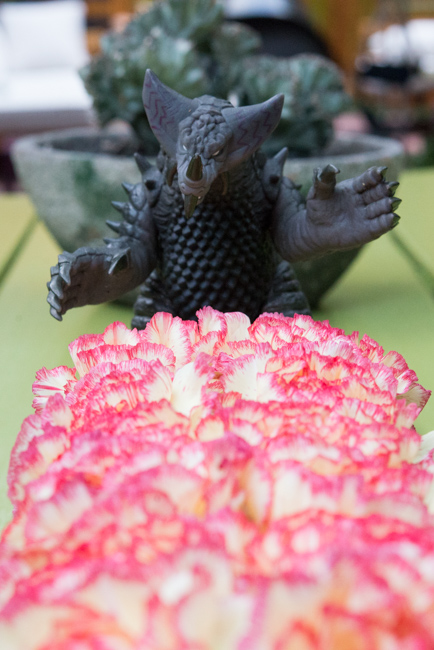 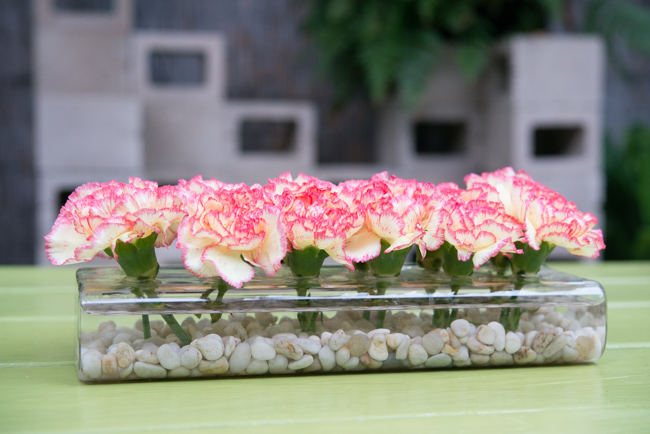 The two-tone flowers join for a blanket effect inside this Vitreum vase. 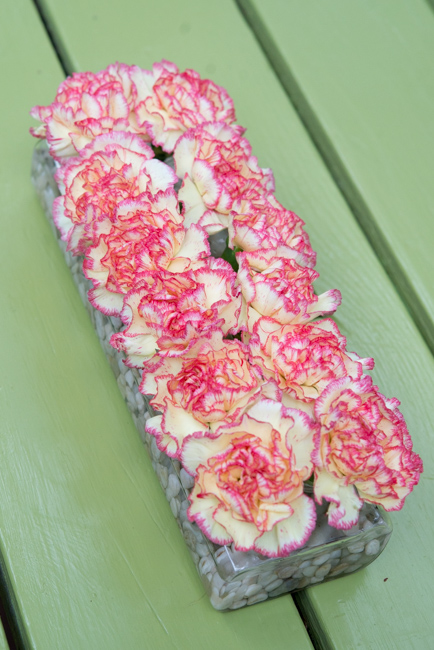 – Throughout the ages, white carnations have symbolized luck, yellow carnations disdain, pink a mother’s love, and red admiration and love. 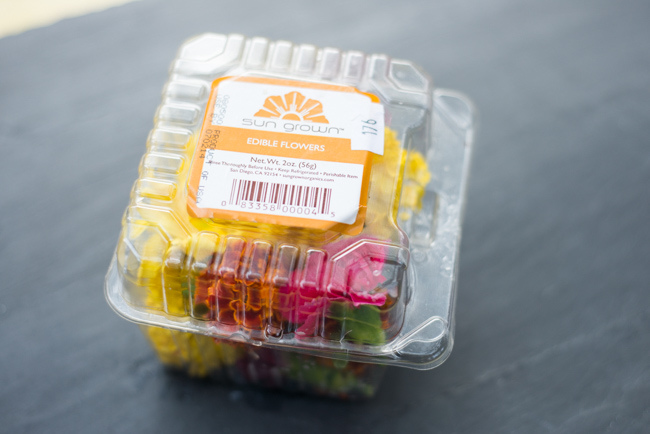 We picked up this edible flower pack from Sun Grown inside the produce department at Whole Foods.

– They’re unbelievably hardy. The cut carnations in the photos in this story have lasted well over a week.

– No bud vase? No problem. You can temporarily stick the cut blossoms between the slats of a picnic table, nestling them around your guests’ place settings. 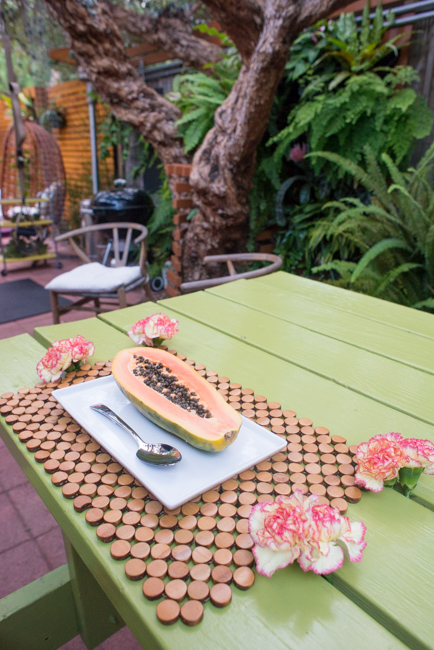 After cutting a few blossoms too many, I started stuffing them between the slats of our picnic table. Turns out, this is a fun way to surround your guests’ place settings with flora. 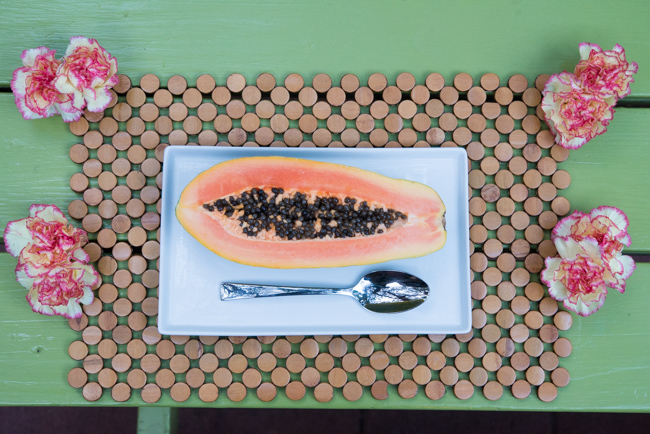 Our ruffly carnations even became a conversation piece during a recent lobster/sweet corn dinner party.

Not since last spring’s easy-to-love peonies have we been so mesmerized by the texture of a cut flower at our house. Larry Anhorn of Adelaide’s sums it up best: “If you actually take time to look at the petal structure,” he says, “it is one of the most complex around, and as sophisticated as any garden or tropical flower found in nature.”

UPDATE (Thanks, Adam!): Wondering how to grow them? We got so wrapped up in our design notes we neglected to include cultivation tips (!). But here’s what some research has yielded: They’re hardy in zones 3 through 9, and take a shine to full sun (some shade might be necessary in hotter regions) and well-drained, slightly alkaline soil. Water regularly. To get big, beautiful blossoms, leave only the terminal flower, pinching off all other buds down to the fifth joint. Deadhead faded flowers.

Carnations can be grown from cuttings or seed, typically blooming from late spring into early summer, although some varieties will bloom until frost. 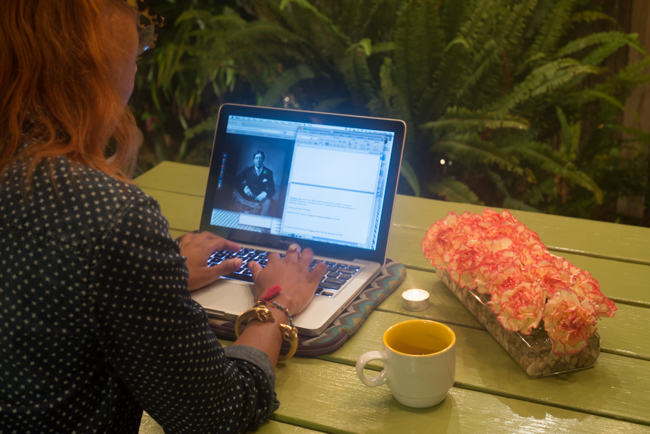 The scene last night: Burning the midnight oil beside a frilly log of carnations.