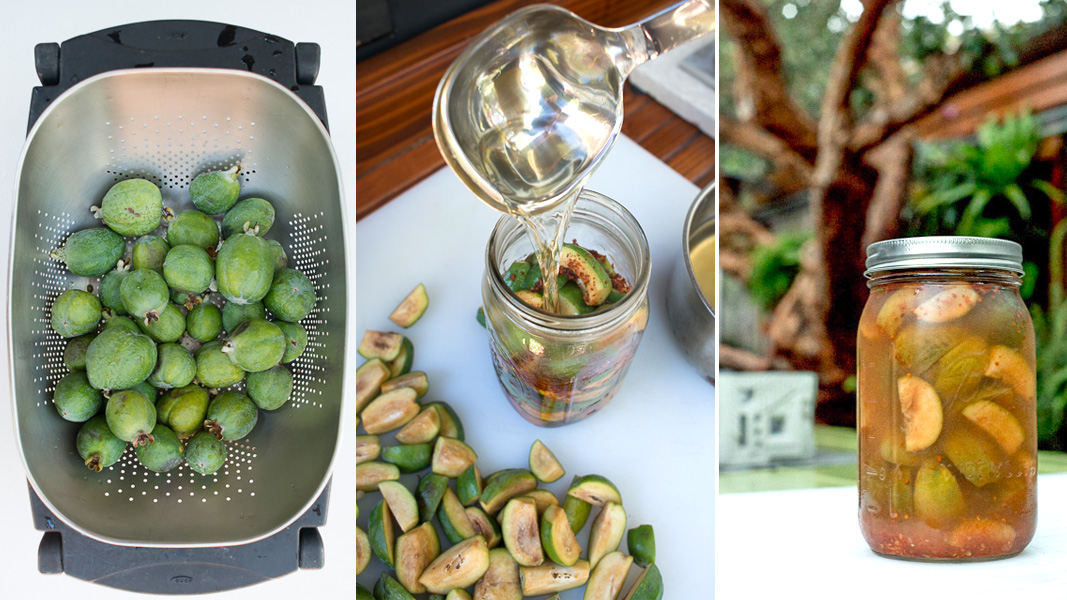 It is a truth universally acknowledged that when you spend most of the year anxiously awaiting a crop from your garden, you will eventually be up to your eyebrows with that crop, scrambling for ways to eat it all. For some of our friends, it’s tomatoes in the summer. For us, it’s the egg-shaped pineapple guavas produced every fall by the feijoa tree which canopies the north end of our backyard. 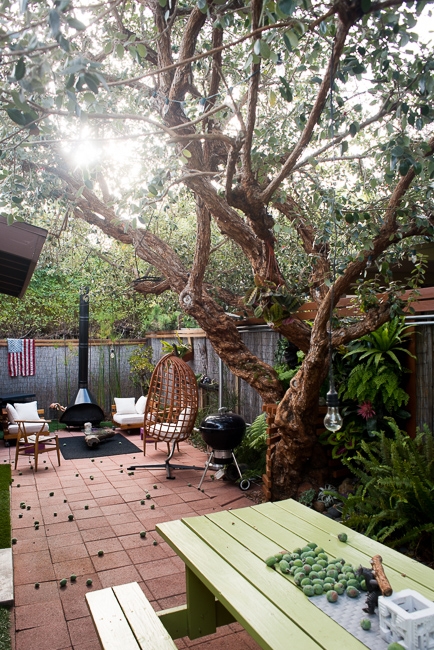 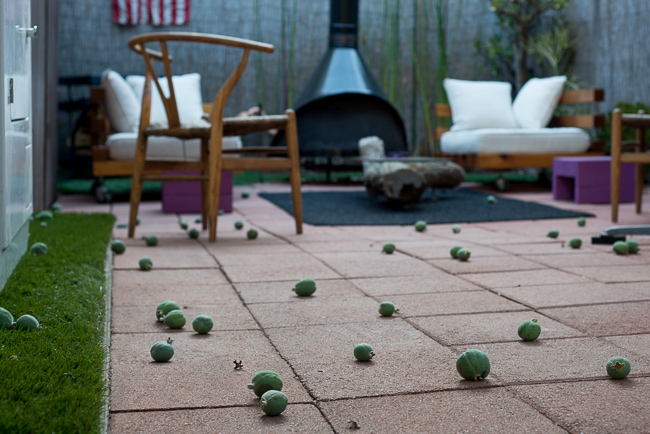 Our tree is at least 60 years old. Its guavas remain green on the outside and mostly pale yellow on the inside when ripe. (Contrast that with the pink centers of its flashier cousins.) Feijoa flesh has a clean, sweet-ish taste akin to a citrusy pear, and its edible skin is tangy and intensely aromatic.

Last year we got boozy with our bounty. This year — after bringing in bags of them to our offices, slicing them onto salads, gnawing on them for breakfast, and bringing the fruits as hostess offerings — we decided to pickle what was left of our feijoas.

RB was the one who proposed it. When C was all, “…,” he reminded her of this:

Although he brought home a couple pounds of pickling salt after researching various pickling methods, we decided to forego salt-brining method in favor of quick-pickling. After polling friends and coworkers, we found this exciting recipe on Belle Jar Canning for making spicy pickled nectarines. 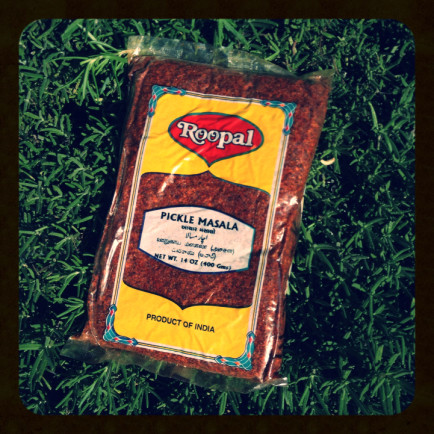 We were intrigued by the recipe’s use of pickle masala, a mix of spices (e.g. split mustard, split fenugreek, chili powder, asafetida) used in Indian cuisine. We wagered that the masala would be the perfectly scorching counterbalance to our guavas’ tangy rind and sweet flesh. Swimming together in a jar, this fruit (native to Brazil) and the spices would also be a nod to C’s South American and South Asian heritage.

We stored our pickled feijoa in the fridge for a week and a half before sampling it — and the results were delicious. 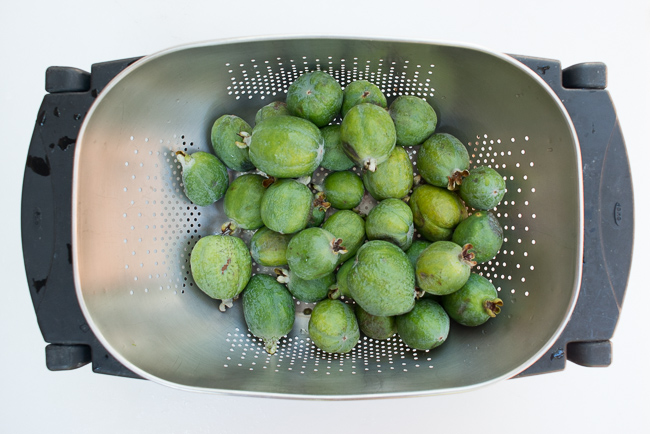 – kosher salt (if masala is unsalted) 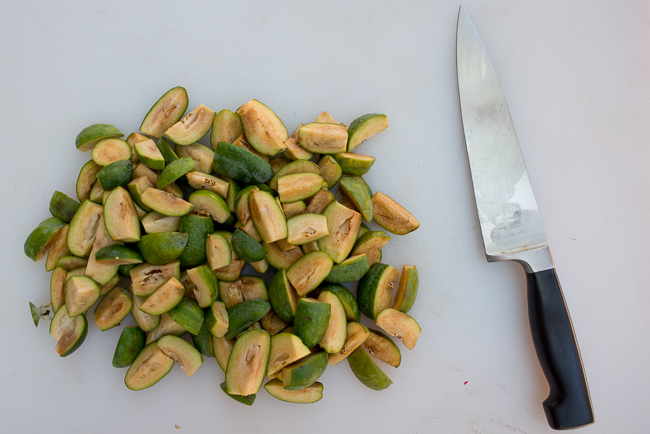 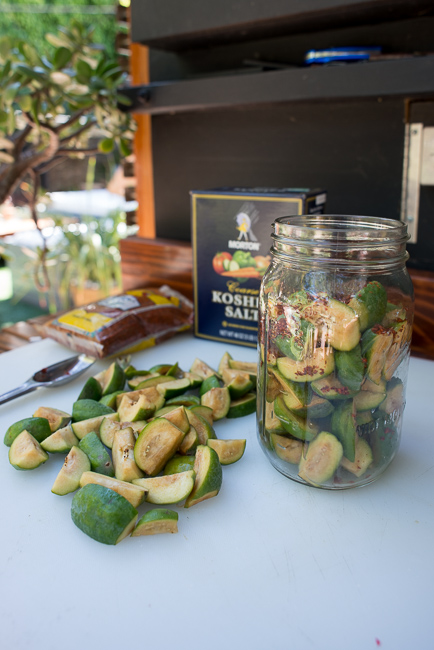 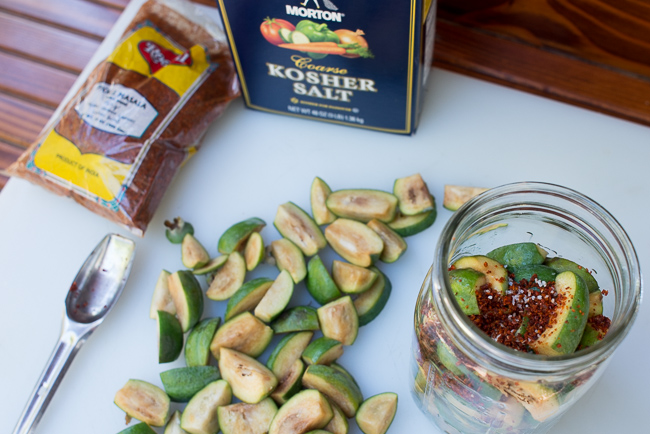 Combine vinegar, water and sugar in a small saucepan, bring to a boil, reduce and simmer for 20 minutes uncovered. Cut guavas into quarter slices and pack into sterilized jars within an inch of the top.

Add masala spice to jars, about 1 tablespoon per 16 ounces. (The jar shown here is 26 ounces.) If masala is unsalted, add a pinch of salt to each jar.

Pour hot pickling syrup over guavas, leaving a half-inch of head space at the top of the jar. Gently tap jars to remove any air bubbles trapped between the guava slices.

Wipe rims and apply lids and rings. If preserving for shelf stability, process the jars by carefully lowering them into a boiling water bath for 15 minutes.

Otherwise, wash jars once cool, and store in the fridge. (We went this route.) 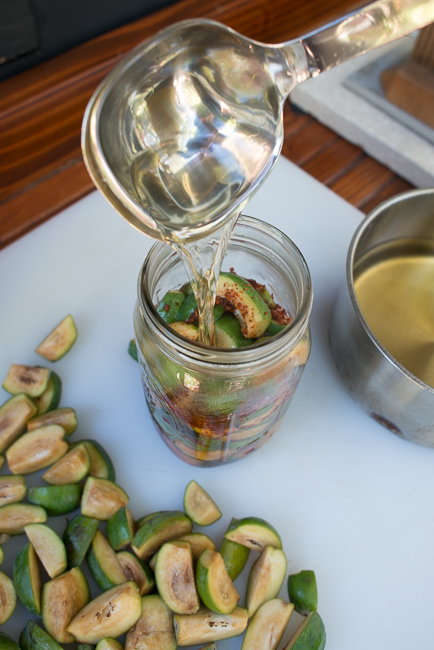 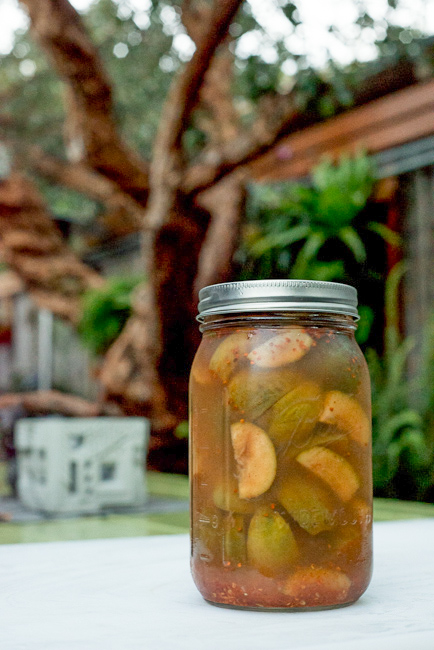