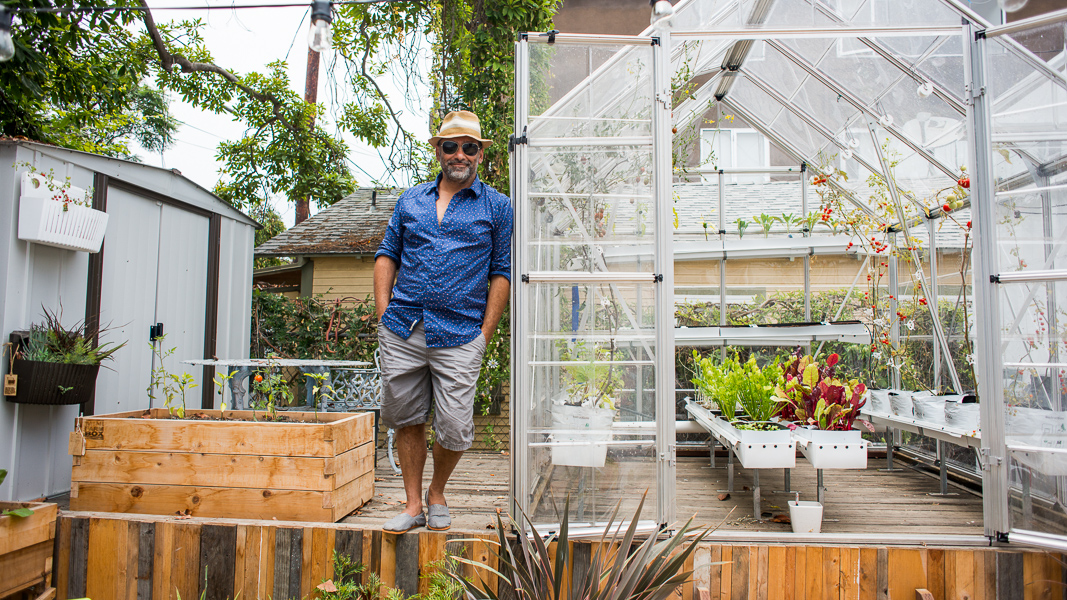 “It’s unpredictable to be in a space that’s both indoor and outdoor in the same breath,” says furniture/accessories/interior designer Ilan Dei as he stands in the shop he founded last year in Venice, California. “People will be on their cell phones as they’re walking in, and then they’ll drop their cell phones. Just like that — they’re paying attention to what’s going on here.”

“Here” is Ilan Dei Venice, which sells the “lush minimalist” outdoor furniture designed by Ilan Dei himself (pronounced ee-LAHN DAYY) and fabricated not too far from the shop’s Abbot Kinney Boulevard location. It opened in August of 2012 first as a pop-up before Ilan (pictured in the photo at top) decided last month to make the store a permanent player in this artsy design corridor less than a mile from Muscle Beach. 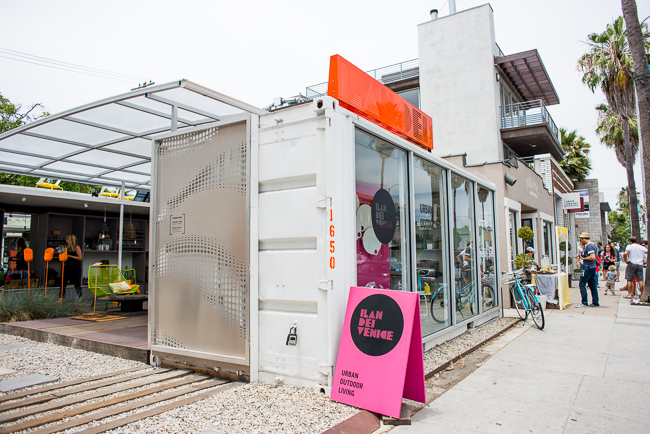 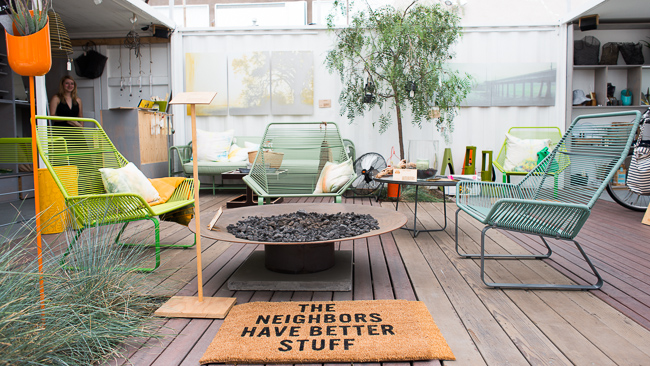 After a blessedly traffic-free drive up the 405, we met up with Ilan on a mostly sunny Saturday in mid-July. This plant-loving environment hosts a 50/50 split between locals and tourists; here you’ll find fashionably windswept Westsiders shopping for birdfeeders beneath a pepper tree, and out-of-towners checking out the chive in the backyard-friendly greenhouse. (More on that later.)

Formerly an empty asphalt lot, the location is now a breezy flow of shipping containers, pathways lined with New Zealand flax and blue fescue, and awnings of glass and steel. The palette? Whites and grays goosed by flashes of citrus and magenta. The mission? To make outdoor urban living (and gardening) “comfortable,” Ilan says — on one’s body, eyes and spirit. 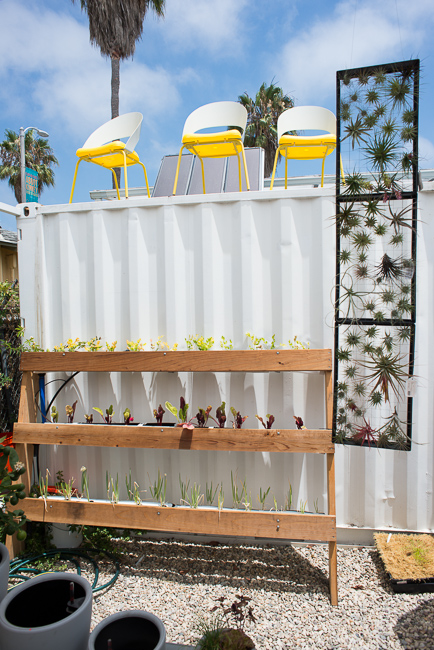 “We’re the only store that doesn’t have a roof,” Ilan quips. “We’ve gone through one winter, and it was painful — but now it’s dialed in. Our inspirations were Hawaii, Costa Rica — places that get a lot of rain, but because it’s hot, you can’t really enclose it. By creating a series of overhanging [features], we’re allowing the wind to come in and ventilate. Last week it rained here, but I didn’t have that fear that something would get damaged. To have pure and open ventilation but still feel protected from the elements was critical for us. We’re showing that you can do that while being off the grid.”

That’s right: A shop in one of most happening hoods in the U.S. exists off the grid. There are no bathrooms or phone lines here. Energy is created by the solar panels atop on of the containers, and there’s a plan to collect rainwater in a space-efficient way come winter. 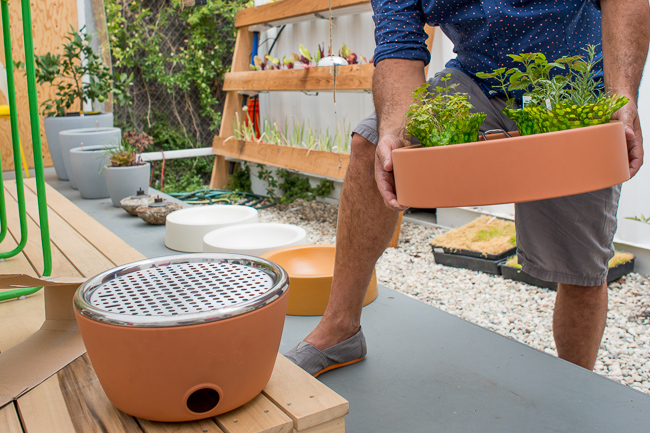 Ilan demos an herb-garden-turned-BBQ by Black & Blum. (Did somebody say “wedding season”?) The piece is sold alongside the furniture Ilan designs. “We don’t discriminate against other geniuses,” he jokes. 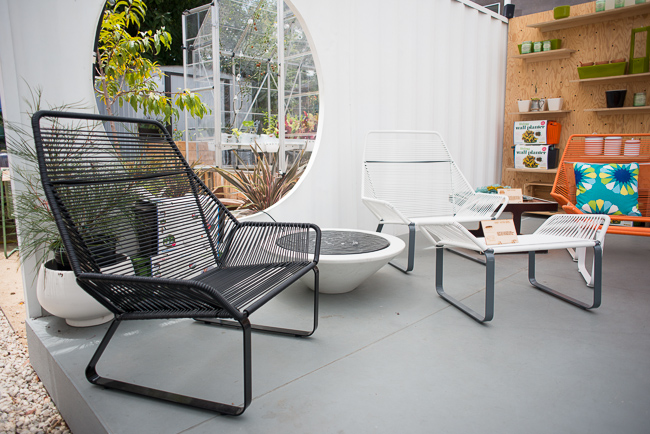 Loungers and ottomans from Ilan Dei Venice’s Cord Collection, and a firepit from the (you guessed it) Firepit collection. All of Ilan’s furniture is made in Venice, CA. 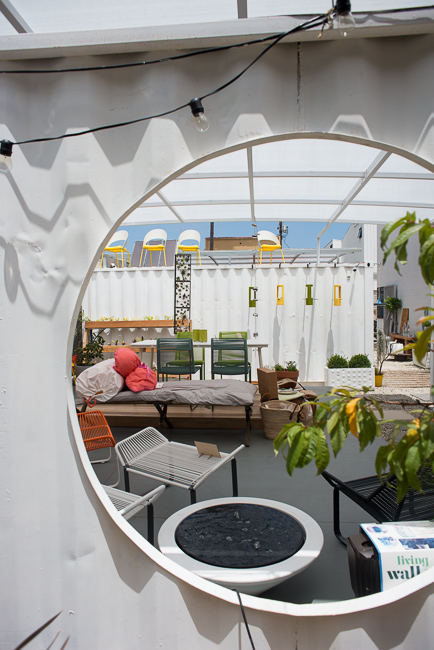 If anyone could pull off such a triumph of self-reliance, it would be Ilan, who grew up on the HaZore’a kibbutz in northern Israel, which produced, among other things, furniture informed by Scandinavian minimalism.

“A lot of people with an entrepreneurial spirit come from a kibbutz,” says Ilan, who himself embodies interesting contrasts — stylish but approachable (“tell me if you need help, yeah?” he calls over to a visitor), broad-shouldered but also immediately endearing. About the kibbutz he adds, “What you take [from it] is relatively modest, but the environment allows you to explore and get supported and [carry out] interesting ideas.”

He later worked as commercial fisherman in the Atlantic, and then as an apprentice to master Japanese woodworker Kai Ito. After moving to L.A. in the early 90s, Ilan worked as a metal fabricator for Tom Farrage & Company, creating product for architects like Thom Mayne and Frank Gehry. 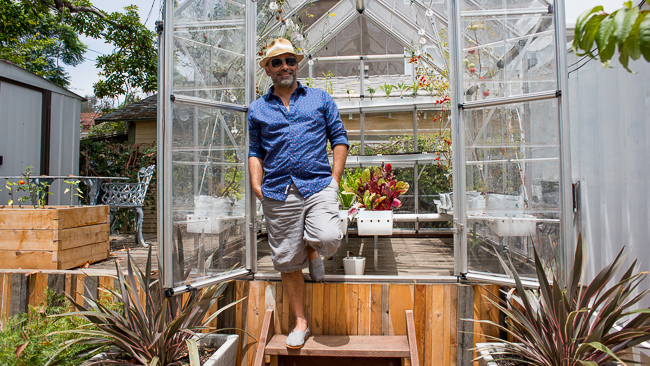 Here today in Venice, California, Ilan is determined to make gardening easier and more bountiful for anyone interested, including those just getting their feet wet. (Or muddy, rather.) The crown jewel of this mission is the CHG Food Factory, a lightweight 8-foot-by-8-foot greenhouse. The structure includes timed irrigation, water recycling and gutter systems, growing bags, plants, and a coconut husk medium. 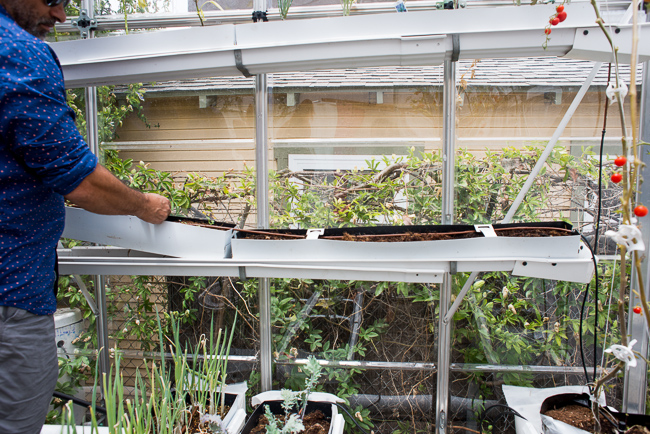 Inside the CHG Food Factory. The shop’s greenhouse is growing chives, arugula, cucumbers and five different kinds of tomatoes in a hydroponic coconut husk medium. 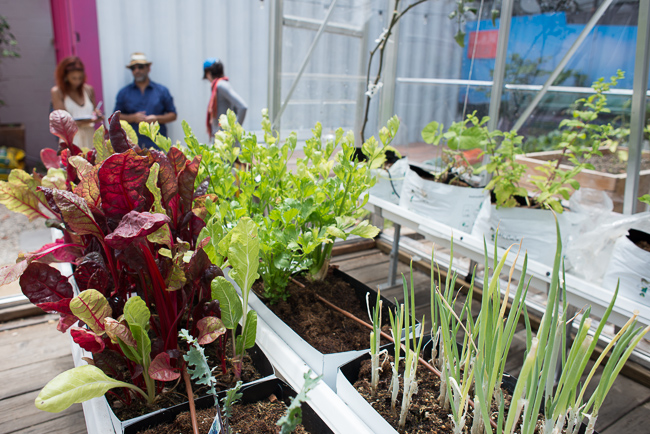 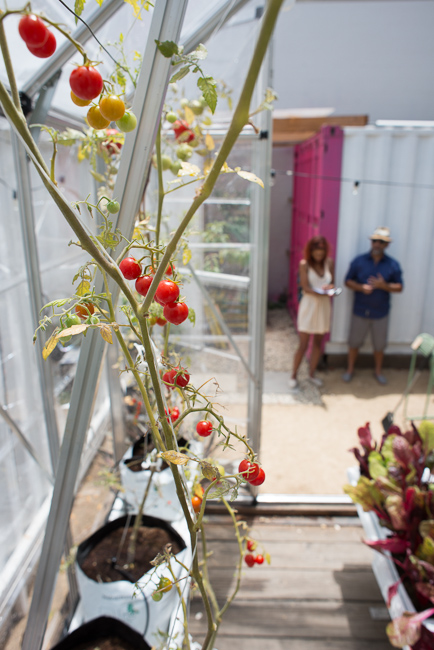 You’ll see one of the greenhouses cranking away at the shop, growing arugula, chive, parsley, cucumbers and five kinds of tomatoes — from a hydroponic, bug-resistant, oxygen-stockpiling coconut husk medium. The Food Factory is foolproof, Ilan says, and works for even the most intimidated beginner. In fact, “I only started gardening a year-and-a-half ago,” he tells us as he plucks a few tomatoes from a vine for us to try.

If the greenhouse’s $3,500 pricetag is a sticking point, the shop also offers planters, mini farm boxes and a vertical gardening structure (also designed by Ilan) designed to lean against the façade of your house for stacked, space-effective homesteading. Plus, there are workshops. Previous ones have including a tillandsia tutorial with Josh “Airplantman” Rosen (designer of the fabulous airplant frames sold at the shop) and an urban farming event with Culver City’s own Kristi Wilhelmi of Gardenerd. 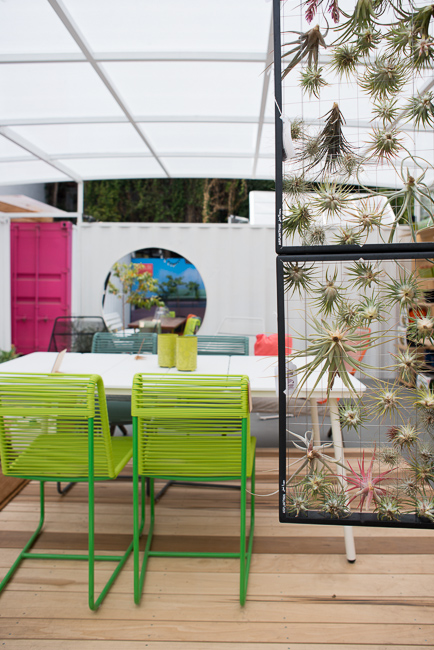 A tillandsia frame by Airplantman. 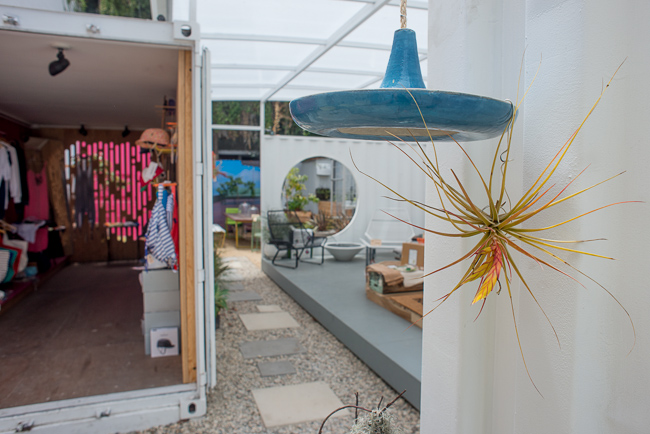 The cutouts in the shipping containers (at left) were inspired by Moorish design in Spain, and executed via digital fabrication. They allow for “pure and open” ventilation no matter the temperature.

Furniture-wise, Ilan’s work is aided by digital fabrication and 3-D printing. Pieces include the Cord Collection, inspired by Palm Springs’ iconic vinyl-corded midcentury furniture. About the generously sized lounge chair, the designer says, “I was interested in designing a chair that you could snuggle with someone next to you, and not separate. Like it’s better to have a queen-size bed than a king-size bed, right? Otherwise you just never meet.”

In addition to his furniture, firepits, planters and fountains, Ilan Dei Venice carries cargo bikes by Cetma, fig-shaped vases by Roost, Stella McCartney sunglasses, bags and surf slings by Baggu, and mushroom kits by Back to the Roots, to name a few. The bird feeders are the work of Gainey’s, the ceramics legend that recently shuttered its L.A. business after more than 60 years in business. 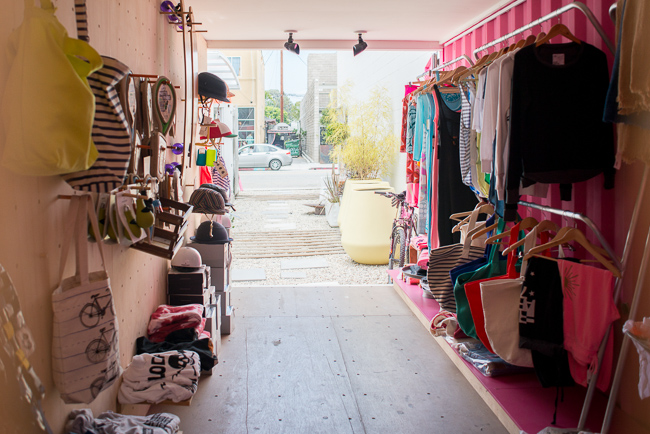 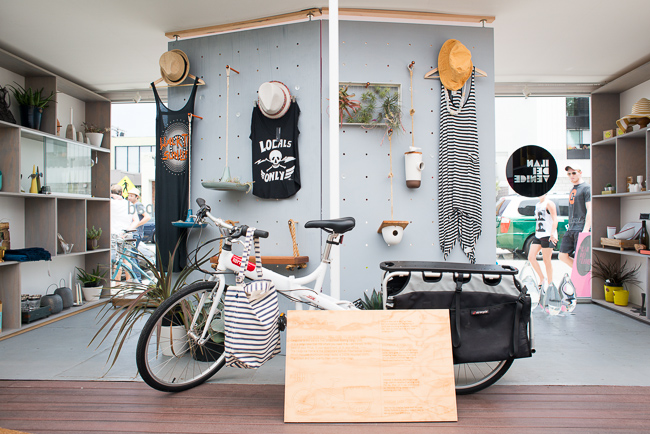 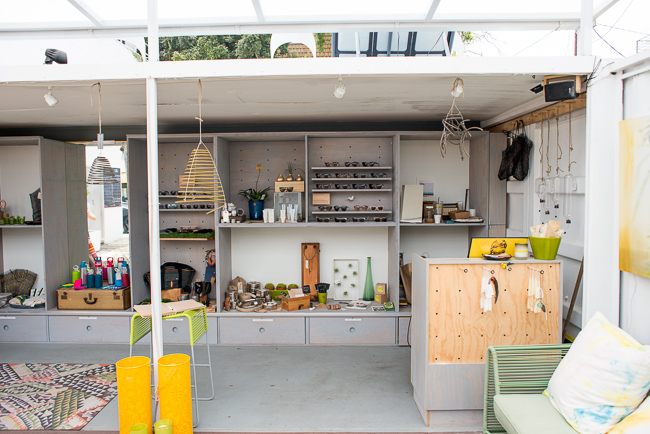 Can you spot the solar panels?

In all its diversity, Ilan Dei Venice represents the colossal potential of urban outdoor spaces, the potential to be playful, serene, tactile and inspiring — rather than the space between points A and B. The shop’s lively approach to minimalism is key.

“Lack of resources leads to minimalism — doing very well with the very little that you have,” Ilan says. “The only problem with minimalism is that it’s a little inhumane in the end. I’m from the Middle East, so it’s not warm enough for me. When I design, there’s a skeleton that’s very minimalist, and then we add some degree of lushness to it. So that you can have more of an emotional attachment — and it’s not just an intellectual exercise.” 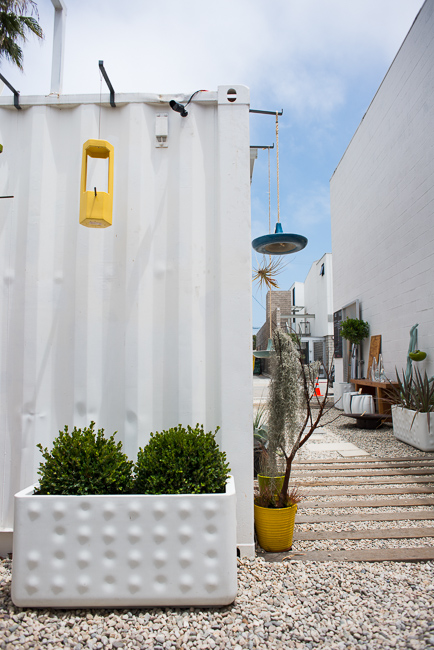 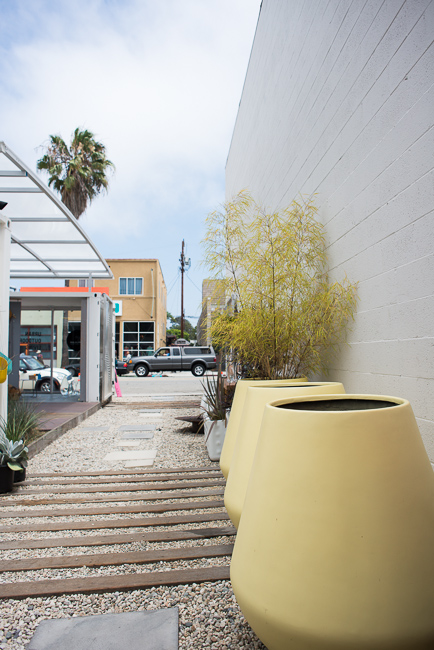 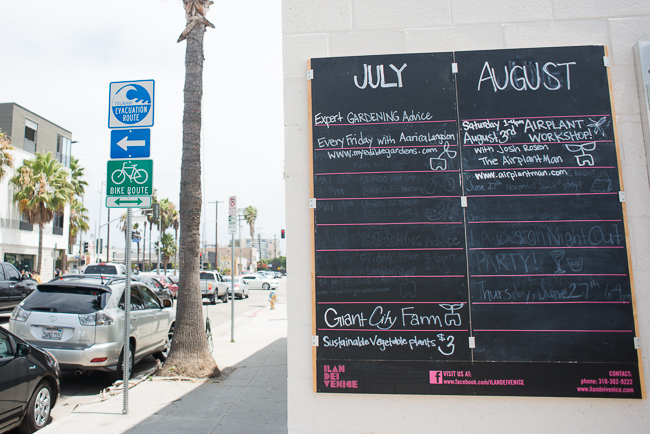