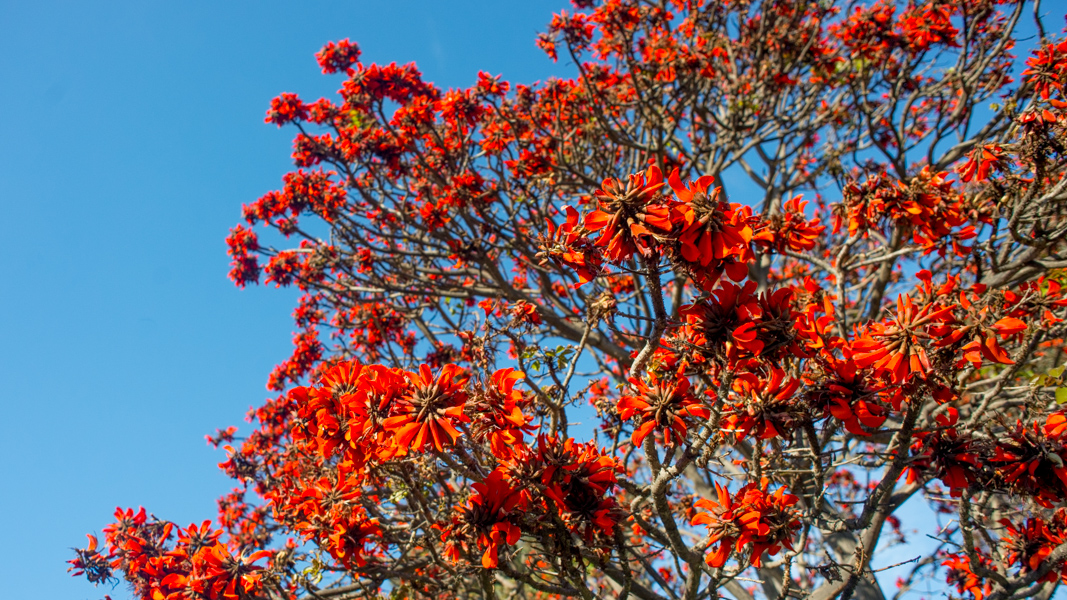 06 Mar Red All Over: Why the Coral Is an International Celebri-Tree

Erythrina is a genus containing about 130 species of coral trees, and its name derives from the Greek word erythros, which means red. No kidding! The coral trees in our area come in every shade of it — from orangey-tomato to deep scarlet, flowers that are almost gaudy against our Delft late winter sky. 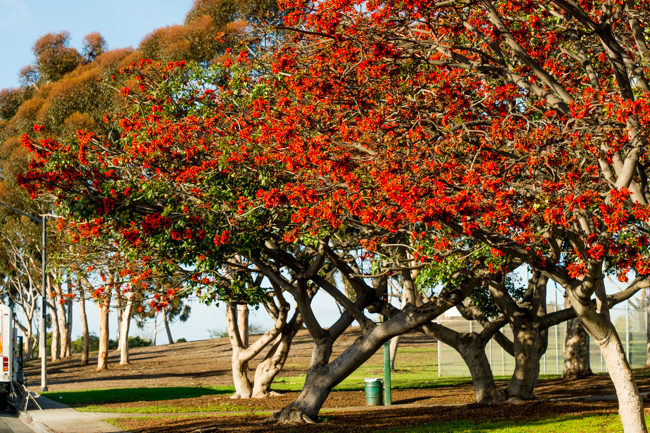 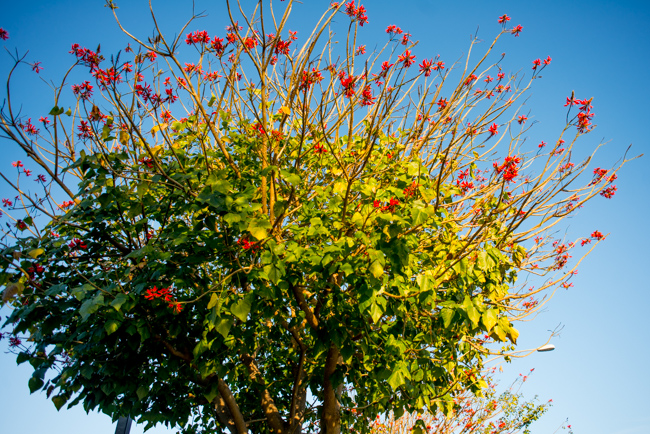 We found an Australian coral tree (E. x sykesii) residing at the top of Mount Soledad in La Jolla. 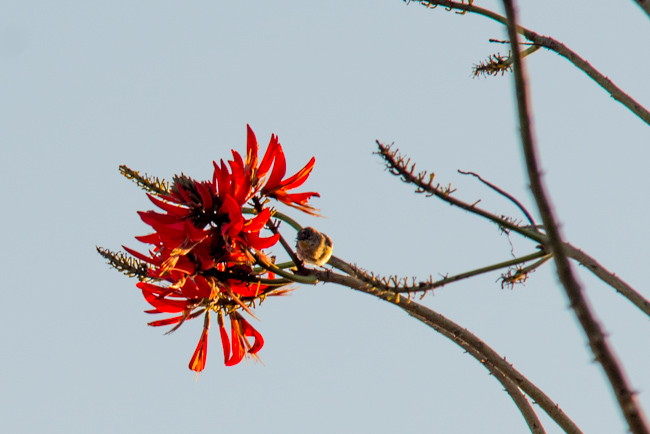 Perching birds like the one above get their nectar from coral trees with more shallow floral shapes. Hummingbirds, by dint of their bills, target more tubular species.

No wonder they’ve enchanted so many poets and lovers and tree stalkers. Erythrina can be found tropical and subtropical regions around the world. E. variegata (the Indian coral or tiger’s claw tree), is native to of South Asia, East Africa, Northern Australia and Polynesia; according to Tibetan Buddhism, the same species grows in the Land of Bliss. In Hinduism, E. stricta is one of the five trees that grow in Indra’s garden in paradise. And in South Africa, E. caffra is considered a “royal tree,” planted by the graves of Zulu chiefs, according to PlantZAfrica.

Ryan and I are really excited about the blooming of the E. caffra (coastal coral tree) that grows all over Southern California, reaching heights between 24 and 40 feet and widths between 40 and 60. There’s a whole cluster of them down the street from my office; when I spotted the first claw-shaped flowers back in January, it was cause for an Instagram fuss. Earlier in the winter the trees dropped their trifoliate leaves, revealing sculptural trunks that seem to twirl when you drive by. Many of the flowers unfurl before, or just as, the leaves appear. 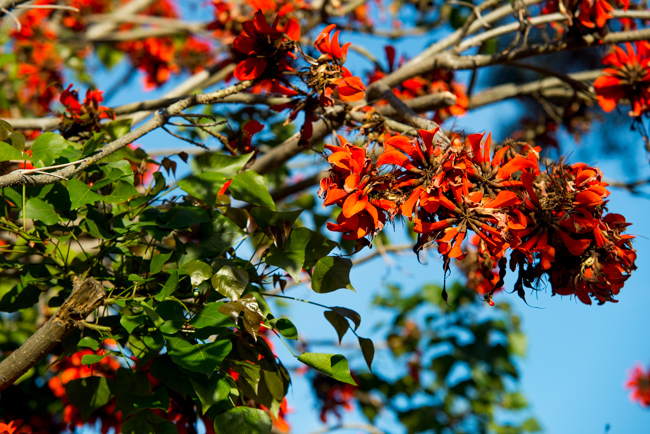 Coral trees bloom before, or just as, the leaves reappear. (There’s even a species called the naked coral.) 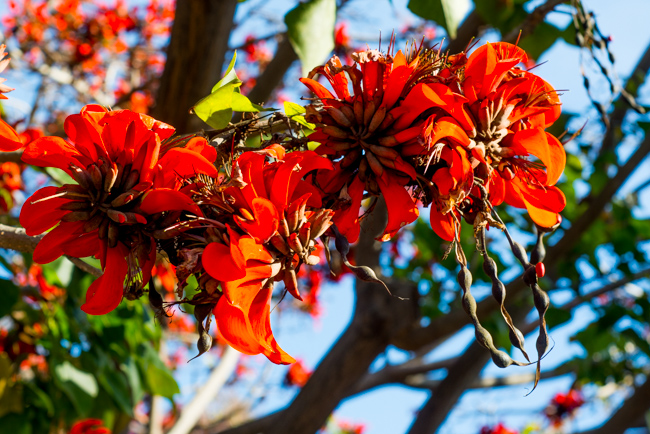 Seedpods form while the tree is still in bloom. Seeds are bright red and poisonous.

Flowers come in a range of colors and shapes. Some are tubular, others have slim, machete-shaped petals, other have broadly oval banners. The silhouettes are predictive of pollinators; the long bills of hummingbirds are adapted to the tubular blooms, and perching birds (passerines) target the more squat flowers for their nectar banquets. The genus is usually deciduous, and water needs range from moderate to drought tolerant. A member of the legume family, coral trees produce slender seed pods; the bright red seeds themselves are, while extremely poisonous, used widely in jewelry. They’re also known to remain buoyant for upwards of a year, and can travel great distances by sea.

Ahoy, my international sweetheart. Take a journey with us below as we explore the coastal coral trees of Dennis V. Allen Park in Southeast San Diego and the Sykes’ coral trees of Mount Soledad La Jolla. 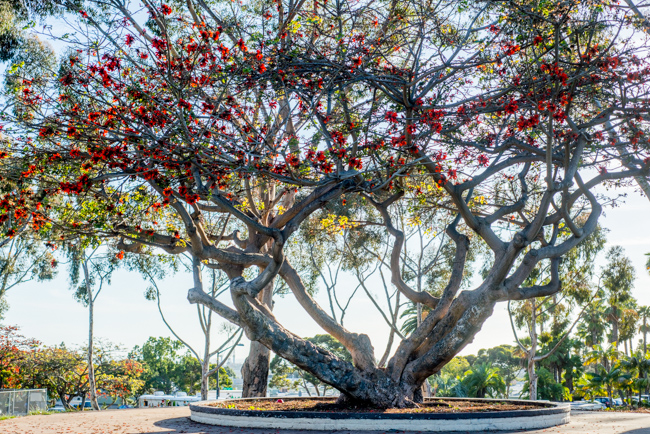 This coral tree is the park’s centerpiece. 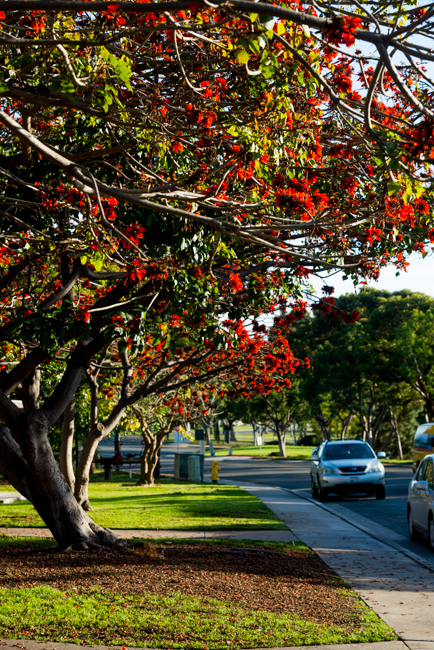 We’re in love with the twisted trunks and limbs of the coastal coral tree. 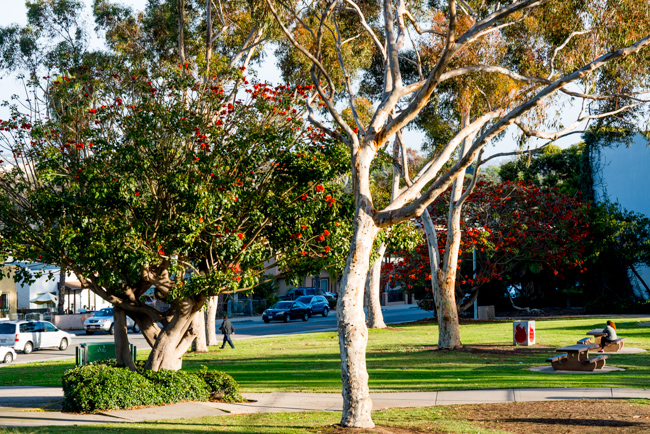 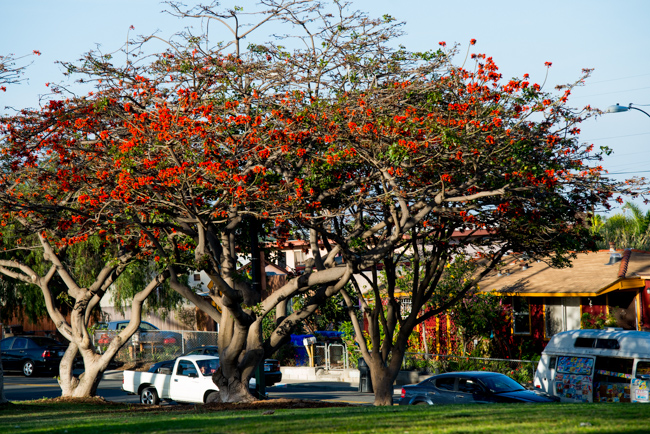 Props to the homeowner who painted the house to match the early blooming trees. (We’re wildly speculating here.) 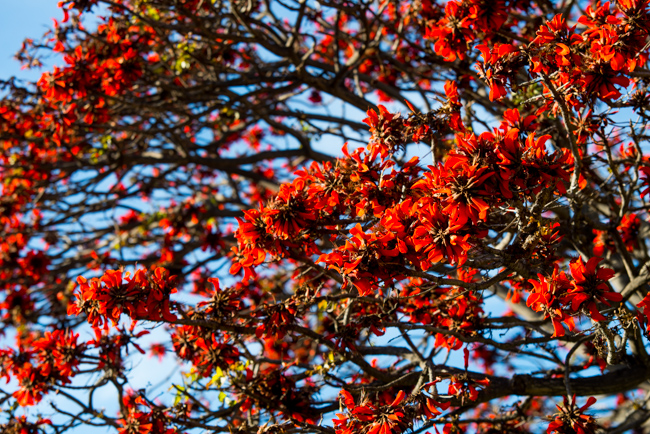 This coastal coral tree is in full, shameless splendor. 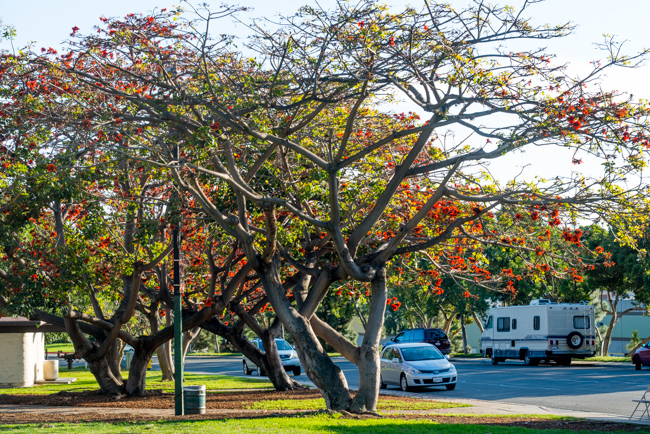 …but this tree has only begun to bloom. 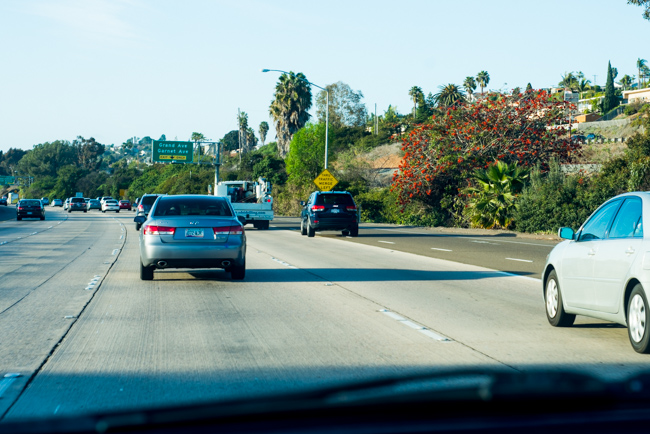 Coral trees can be seen along the I-5 North. 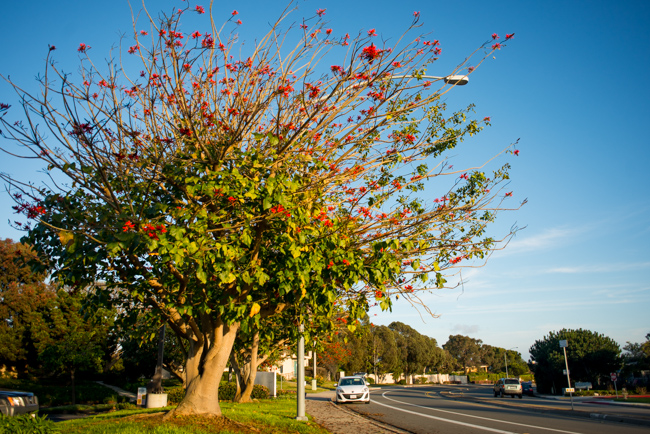 On top of Mount Soledad, we find a strip of seven large Australian (Sykes’) coral trees basking in a golden sunset. 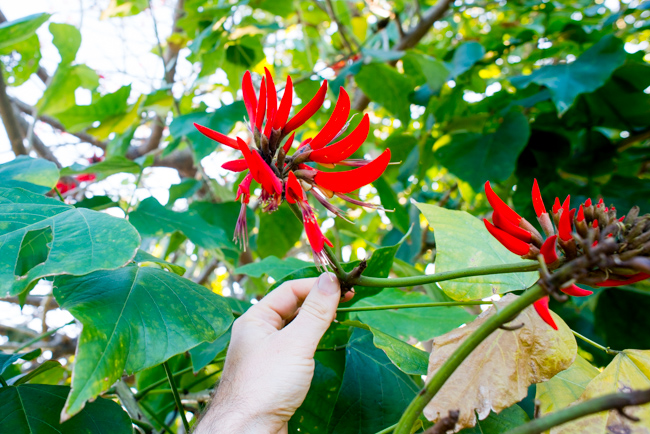 The flowers of the Sykes’ coral tree are quite different in shape from the E. caffra, and leaves are much larger. This hybrid is also sterile (no seedpods!). 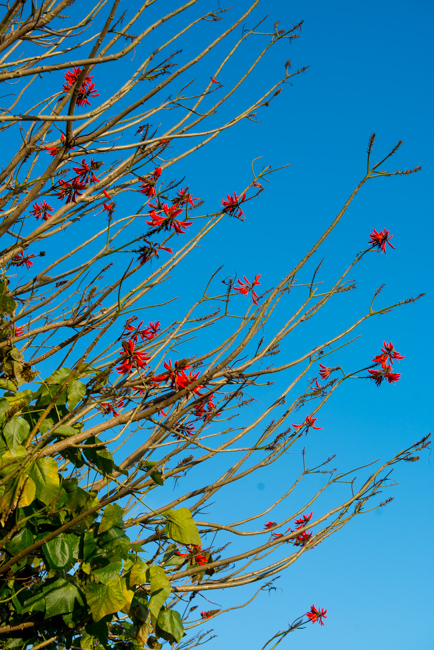 The limbs of this species are much less twisted. The branches are always reaching to the sky as if doing sun salutations. 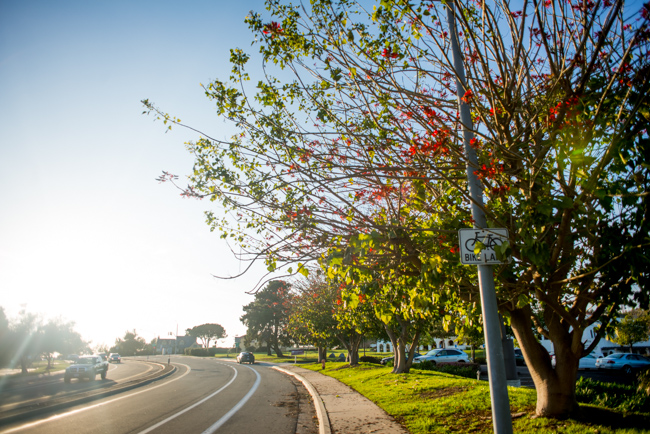 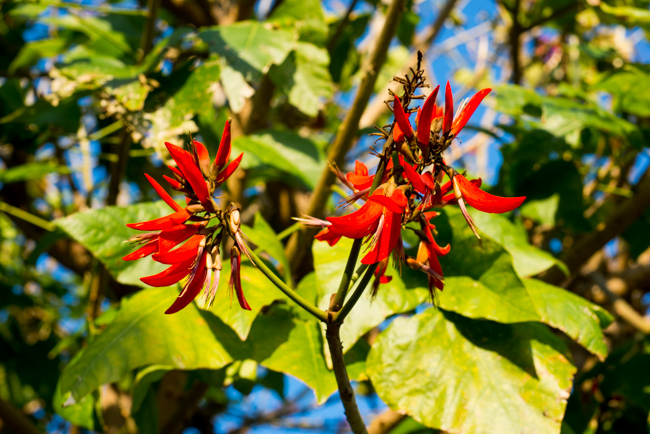 Are there coral trees in your hood? Let us know in the comments!