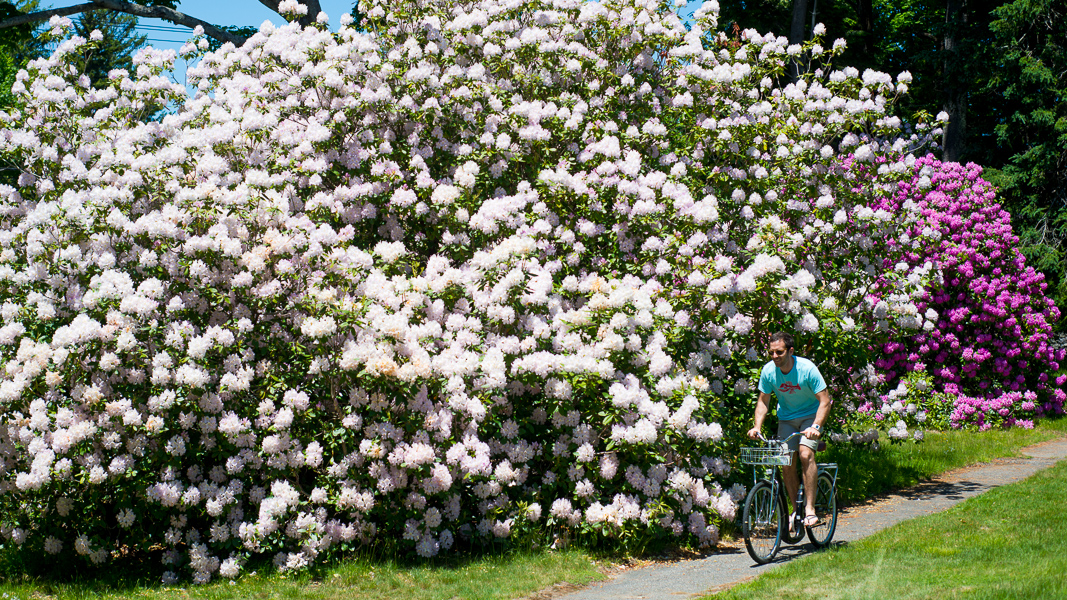 26 Jul Remembering the Rhododendron: Notes on an Acid-Loving New Englander

While relishing a bloodless victory against the king of Persia, Greek philosopher Xenophon and 10,000 of his fellow soldiers stumbled into an abandoned village — and onto a smorgasbord of beehives. The hives’ honey was made from the nectar of rhododendrons, which grew wild near the Black Sea.

The men glutted themselves. Their celebration was short-lived: “From the effects of this honey large numbers of soldiers fell stupefied and maddened to the ground.”

Ah, yes — the old “mad honey” trap. A tactic of botanical warfare: What they ate was spiked with rhododendron’s naturally occurring grayanotoxin.

That was in 401 BCE. Not quite so long ago, we also got intoxicated by the flowers in the rhododendron family. In mid-June, while driving into Kennebunk, Maine, we were welcomed by pink and red and white clouds of rhododendrons in bloom. 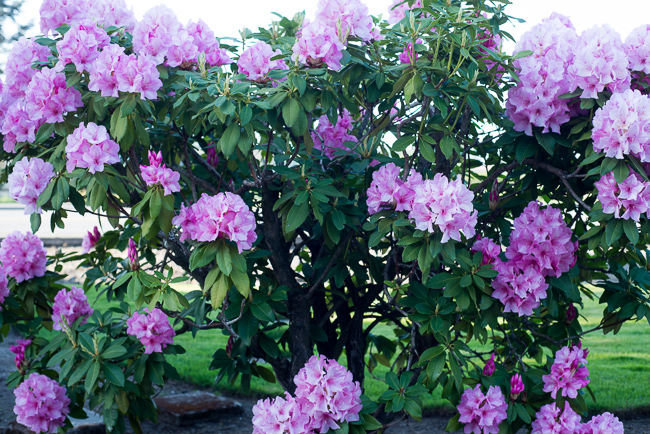 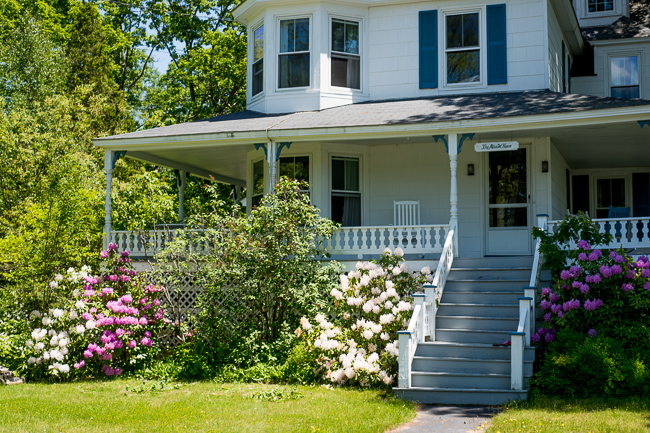 It’s a genus of over 1,000 species and 28,000 cultivars, and a handful of subgenera that include the related azalea. During our visit we saw them brightening the fronts of vinyl-sided houses, jazzing up roadsides, and towering over the paths of the Franciscan Guest House in Kennebunk Beach.

Already past peak bloom, what we saw was still spectacular. The flared, clustered flowers are now pretty much faded for the summer, so we’re honoring the end of rhododendron season with some of our favorite photos. 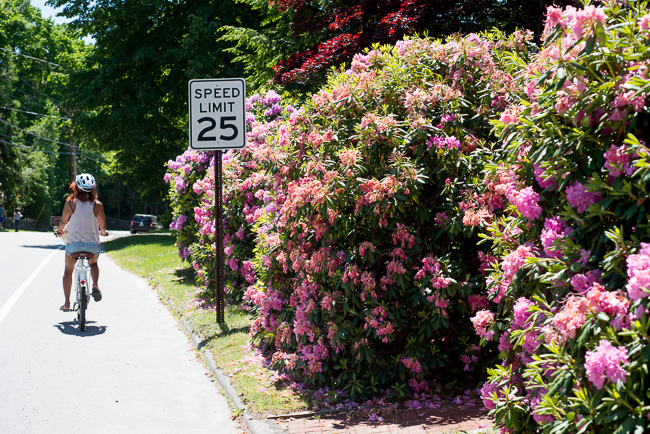 The flared clustered flowers, in colors ranging from white and coral to pink and purple, jazz up the bike paths of New England. 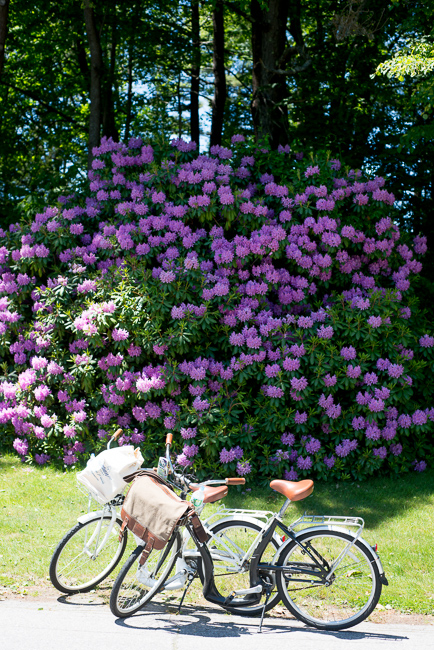 A tower of rhododendron at the Franciscan Guest House in Kennebunk Beach, Maine. 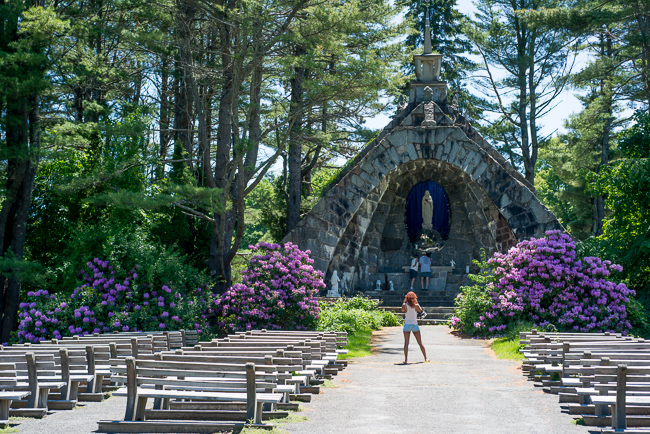 Our Lady of Rhododendron. (Not the real name, but there is a ring to it…)

The rhododendrons that rule New England can be divided into two groups: large-leaf and small-leaf. According to Weston Nurseries, the small-leafers bloom near the top of spring, in early April even, and are smaller in structure. Large-leaf rhododendrons can grow over eight feet tall and bloom in late spring and into July.

The plants famously prefer acidic soil between a pH of 4.0 and 6.0. Many rhododendrons prefer partial shade while tolerating full sun; shielding less hardy hybrids from winter burn is essential. Some rhododendrons are deciduous and others are evergreen:

“Many cultivars retain winter foliage that turns bronzy or even dark mahogany-toned during dormant seasons,” Weston Nurseries writes. “This striking winter appearance creates fine opportunities for combining with colorful evergreens to enhance the appearance of the winter garden. Many hybrids also have leaves that emit a spicy fragrance when rubbed.” 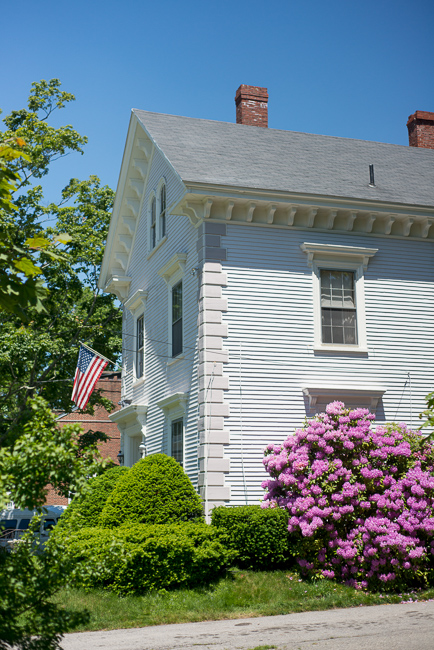 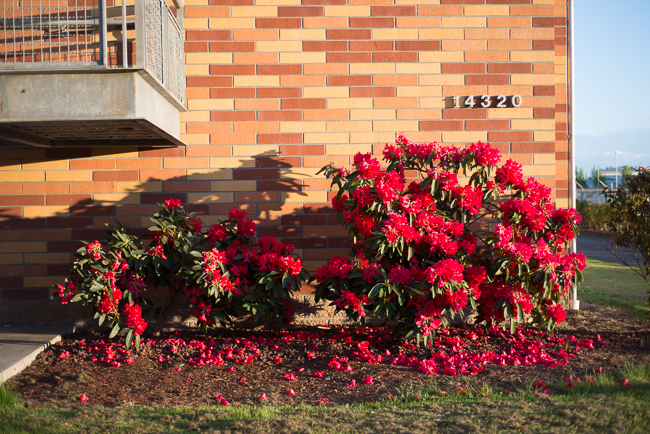 On the opposite coast, we spotted this rhododendron in Everett, Washington. It was mid-May and this specimen’s bloom was already waning. 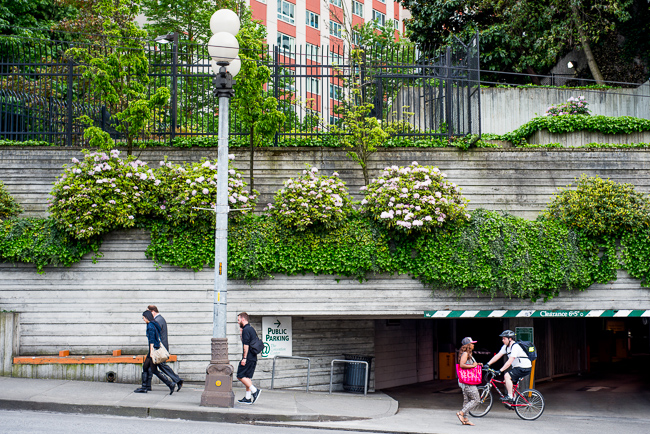 In Seattle, rhododendron thrives as a street shrub.

We’re also reminded by one of our favorite garden books, A Contemplation Upon Flowers by Bobby J. Ward, that poet Ralph Waldo Emerson was wild about rhododendrons.

From Emerson’s “The Rhodora” (1834): “The purple petals, fallen in the pool, / Made the black water with their beauty gay; / Here might the red-bird come his plumes to cool, / And court the flower that cheapens his array.”