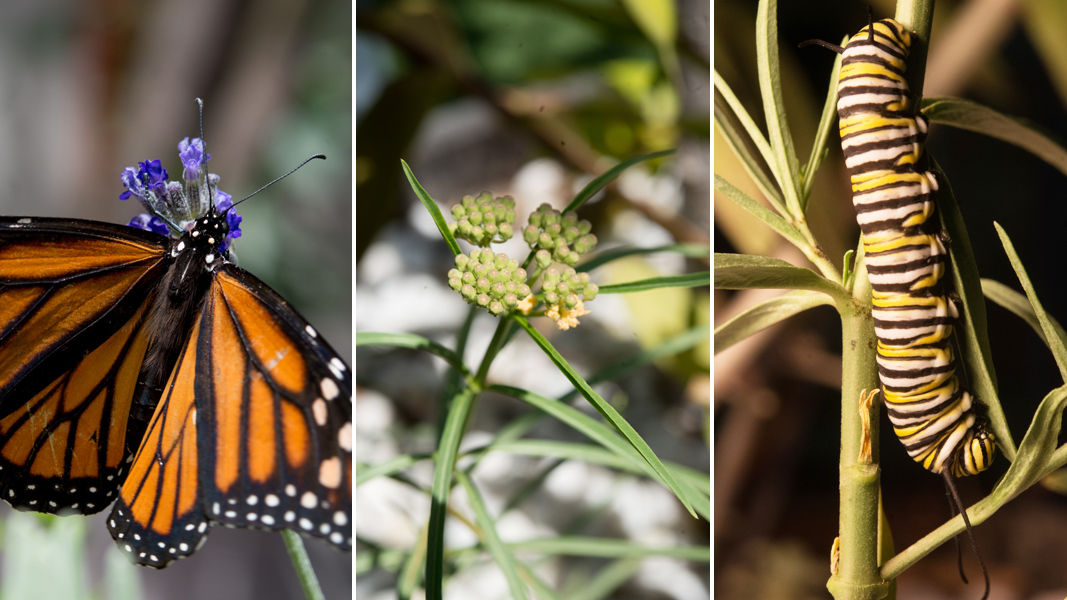 The iconic monarch butterfly is now beginning its migration to warmer climates for the winter: to central Mexico, to Southern California, to Florida and to the Gulf Coast (depending on the population). And humans, these butterflies need our help: population reports have been grim in recent years, with this year representing a hopeful but precarious rebound.

Monarchs need native milkweed plants to survive. It lays its eggs on the foliage, and monarch larvae will only eat the leaves of the milkweed, a weedy plant that has been decimated by herbicide sweeps.

Two weeks ago we picked up a milkweed plant native to our region: Asclepias fascicularis. We found it at local independent nursery Walter Andersen in a six-inch container for $6.99; this narrowleaf milkweed grows white to pale pink flowers and claims a wide-ranging habitat — from Baja California all the way up to southeast Washington and adjacent areas of Idaho. We love that it’s drought-tolerant like most California native plants. 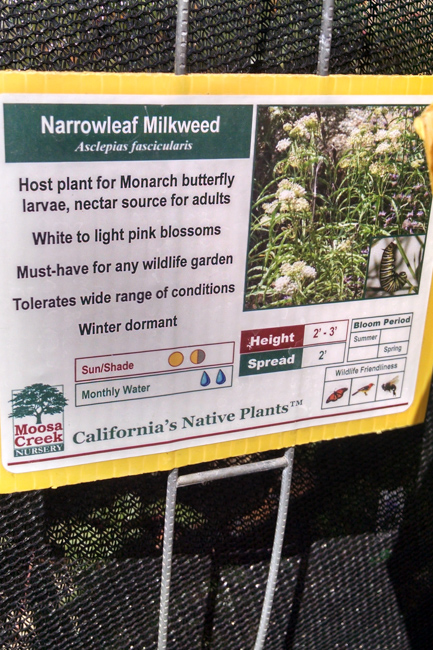 We found a narrowleaf milkweed (Asclepias fascicularis) at local nursery Walter Andersen. A. fascicularis is native to a large region of North America — from parts of Washington and Idaho to Baja California. We’re excited to see growing collections of California indigenous plants at nurseries throughout SoCal. 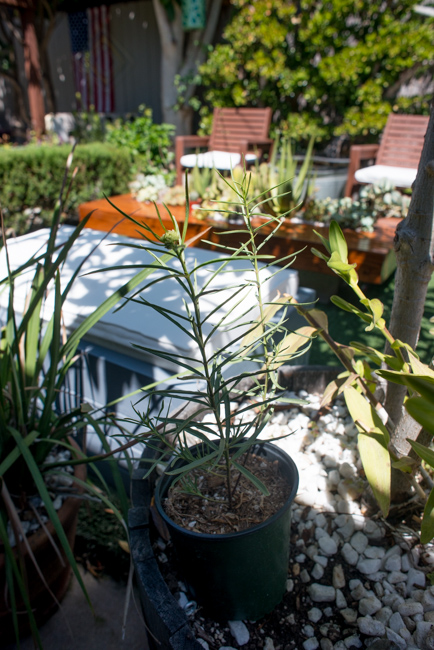 On August 30, we took home our first native milkweed and planted it at the base of our loquat tree alongside our wild orchid. 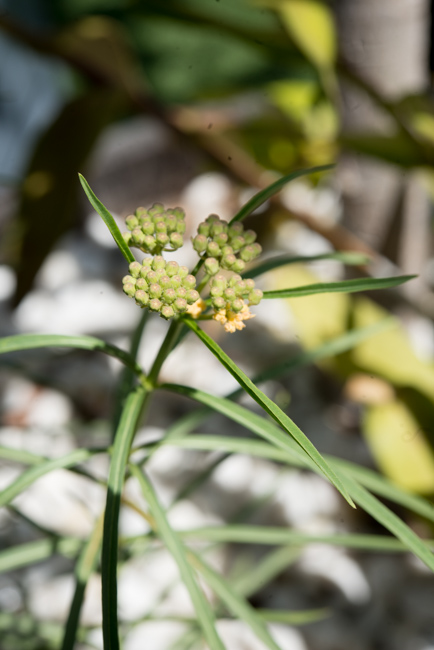 We were anxiously waiting for our narrowleaf milkweed to flower.

Seven days after planting, we had our first sighting of the season! We saw an adult monarch — aka milkweed butterfly — gliding through the garden, radiant with its amber-orange blocks framed by black stripes and white spots. (Note: the viceroy butterfly is similarly patterned, but distinguished by its smaller size and an extra stripe in the hindwing.) This monarch didn’t seem interested in the milkweed during this visit, and instead made a beeline for one of the English lavender flowers. Humph! 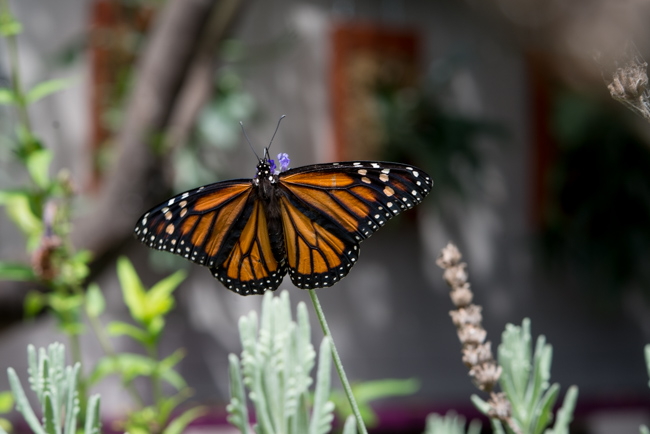 Orange and black is the new black: On Day 7 since planting, we notice monarch butterflies in our garden. Coincidence? Maybe. We were hoping to get a photo of the butterfly discovering our newly planted native milkweed… 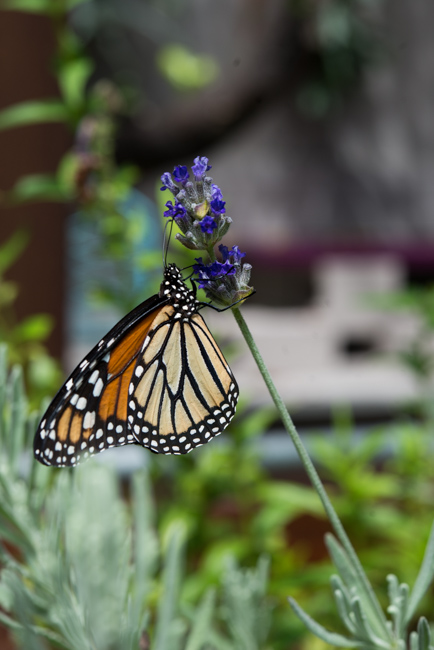 But the monarch butterfly seemed more interested in the English lavender a few feet away.

Fifteen days after planting: last Sunday, we noticed the milkweed’s flower buds had gone missing. Missing! We were a bit baffled but didn’t think much of it…

And then yesterday after work, we saw it: a yellow/black/white striped caterpillar with a royal appetite. 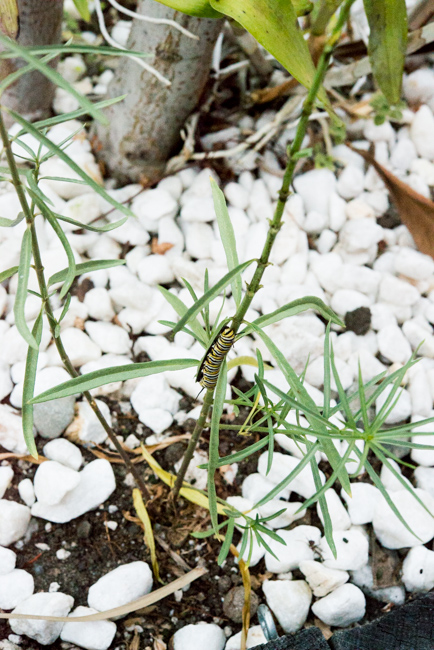 Day 16: After the flowerbuds go mysteriously missing, we discover a nearly full-grown caterpillar devouring our milkweed! Based on its 10-14 day larval stage, the monarch’s egg laying visit must have occurred during the first week of September. 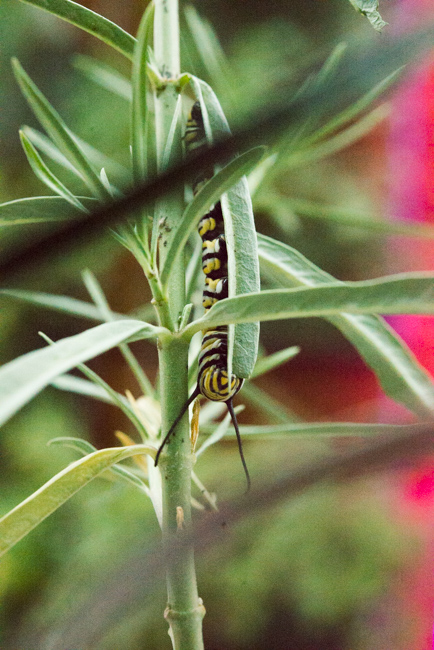 This very hungry caterpillar is now too plump to hide behind this narrowleaf species of milkweed. We dig the healthy appetite!

The National Wildlife Federation recently posted this photo- and video-filled guide to the butterfly’s life cycle, which outreach org Monarch Watch also details here. A monarch caterpillar will eventually grow to 3,000 times the size it was after it first hatched from its egg. This larval state lasts 10 to 14 days; during that time, it will shed its skin (which it then eats!) between five intervals called instars. The pupa/chrysalis stage lasts another 10 to 14 days.

The adult monarch that emerges will live two to six weeks if it is a summer generation monarch. But the “final generation” monarchs, the ones that hatch in late summer and early fall, are the ones that will fly to their overwintering regions, like Southern California or Michoacán, living for another six to eight months. This generation will mate and lay its eggs in February and March after awakening from hibernation.

GIF me some food! It took the caterpillar about four minutes to eat the last half-inch of this milkweed leaf. Once it becomes a butterfly, this “final generation” monarch could live up to eight months.

Want to grow milkweed at your own place? Now — September and October — is the time to plant them! “There are 73 species of native milkweeds in the United States,” according to Monarch Watch, which has a comprehensive map and listing of what species you should plant according to your region.

The program also sells plugs of milkweed inside its marketplace, and you can even apply to get some free plants for your school or nonprofit right here.

Most native milkweed species in the U.S. will go dormant in the winter, which makes lots of evolutionary sense; you don’t want to attract butterflies when they should be migrating. If you have a species that is still producing blooms into late fall, we recommend cutting it back or taking the plant indoors to encourage migration.

This is one royal family we will eagerly be following. 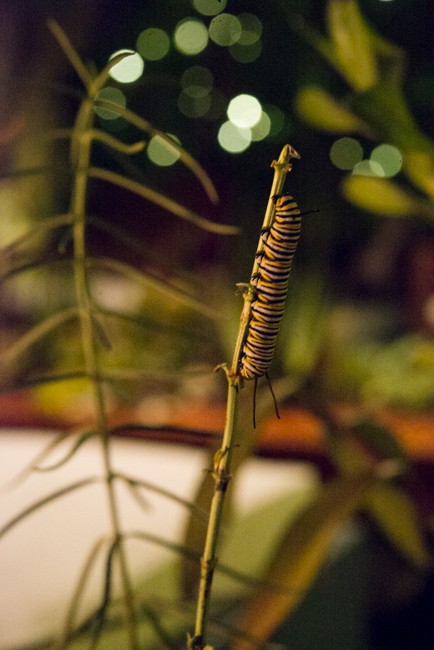