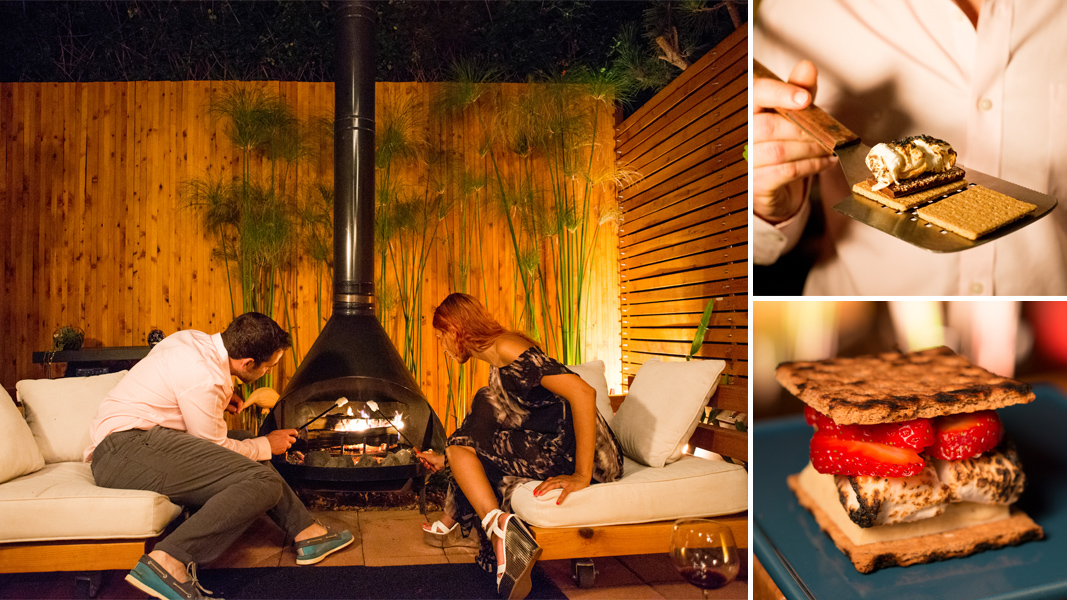 02 Jul The S’More You Know (and a Few You Might Not!): Eating a Campy Classic in Our Backyard

Growing up, I experienced occasional bouts of Girl Scout envy. Friends would come back from their camping trips — talking about fireside ghosts and tree-branch MacGyvering — and I, the non-Girl Scout, would feel like the squarest peg in town.

A contraction of “some more” and consisting of a fire-roasted marshmallow paired with chocolate and sandwiched between two graham crackers, the dessert is a campfire classic going back almost a century. The “some more” is believed to have been first described in print in Tramping and Trailing With the Girl Scouts (whatta name!), published in 1927. 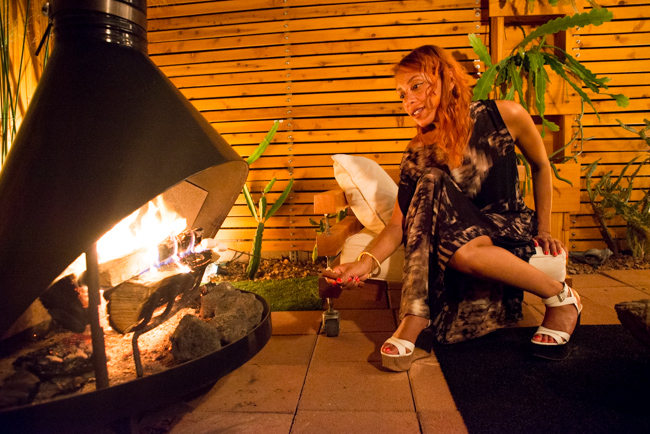 Sometimes we’ll skip the fancy resto donuts and instead scoot home for some s’mores courtesy of our 1960s Preway fireplace. (Thanks, Craigslist!)

I can’t get enough of them. Besides containing three of the yummiest ingredients in your pantry, a s’more takes you through the full texture spectrum at first bite: from crisp to soft to obscenely gooey. Even though Ryan’s not quite as onboard with s’mores as I am (he doesn’t loathe them the way writer Liesl Schillinger does, per her confession on Slate), we have been experimenting with some variations.

Firstly, we avoided the usual Hershey’s and Kraft Jet-Puffed components — which are packed with dyes and artificial flavors — in favor of earthier, simpler ingredients. We varied the chocolates, sliced up some fruit, and sprinkled on some spice! 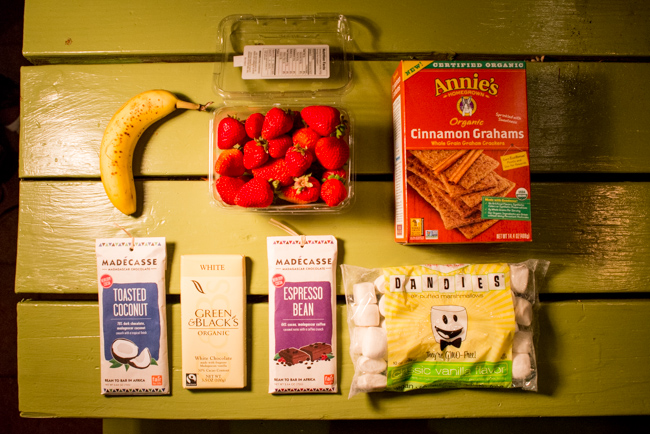 For our three s’more variations, we skipped the artificially flavored Hershey’s chocolate and Kraft marshmallows and picked up simpler, earthier, and in some cases organic ingredients. We found Annie’s organic cinnamon graham crackers, Dandies non-GMO vegan marshmallows, and Madecasse and Green & Black’s chocolates at Whole Foods. 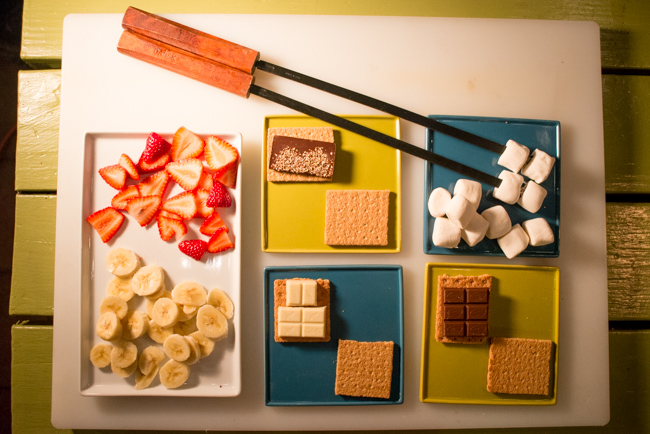 We’re hardly connoiss’mores here. But we loved coming up with the three s’more variations we make below:

(2) vanilla white chocolate with strawberries and ground cardamom, and

All three are hugged by toasted vegan marshmallows and organic cinnamon graham crackers.

You can make them using a backyard fireplace, fire pit, grill, or a s’mores maker , placed under the stars. Or just broil them in the kitchen and step outside to enjoy.

Speaking of MacGyvering. When we couldn’t get the chocolate to soften enough — even smooshed against a screaming-hot marshmallow — Ryan came up with a nifty solution. It also toasted the graham crackers, enfolding the chilly SoCal night with a deeply cinnamon smell… 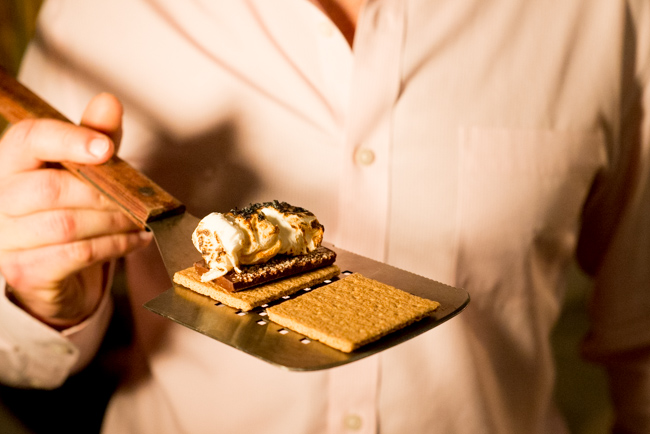 We toasted the graham crackers and warmed the chocolate at the same time by using a serrated grilling spatula. 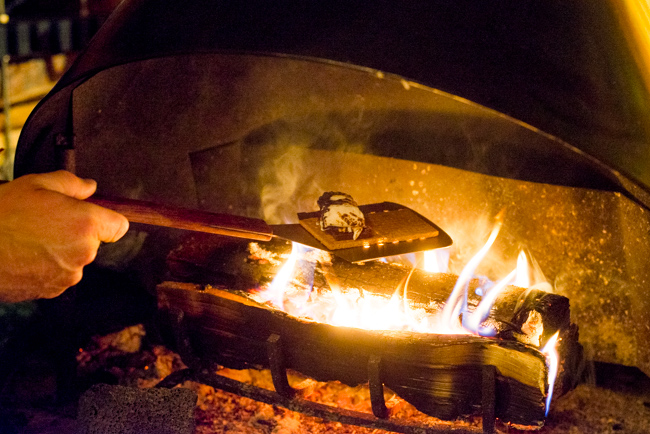 We toasted the s’more for about a minute or until we could see the chocolate start to melt.

How to Make Backyard S’Mores

chocolate bars: dark, milk, white, nut-filled, espresso-flavored — whatever strikes your fancy, but the type that can be broken into squares

Optional: sliced fruit (here we used bananas and strawberries), spices (we sprinkled some ground cardamom on ours), peanut butter, Nutella…

Skewer 1 to 3 marshmallows (depending on size) for each sandwich. Roast marshmallows over flame to desired toastiness (we prefer a bit of char). Remove from skewer and place hot marshmallow over chocolate on bottom square.

Toasting (optional and should be done prior to adding fruit and spices):

To toast crackers and soften chocolate, place open sandwich on a metal grilling spatula. Extend spatula over flames for about a minute, or until chocolate is softened and graham crackers are toasted. Guess what: spatula will be hot! Carefully remove ingredients from spatula back onto serving platter.

Add sliced fruit on top of toasted marshmallow(s), and then make into a sandwich with top cracker square.

Even though s’mores are more of a hoodie-and-shorts arrangement, here we’re a little gussied up. After a fancy restaurant dinner, it’s kind of nice to swan on home and have a fireside dessert in the yard. (Plus, we wanted to break in the new papyrus room…)

We just made sure to have some bibs handy. 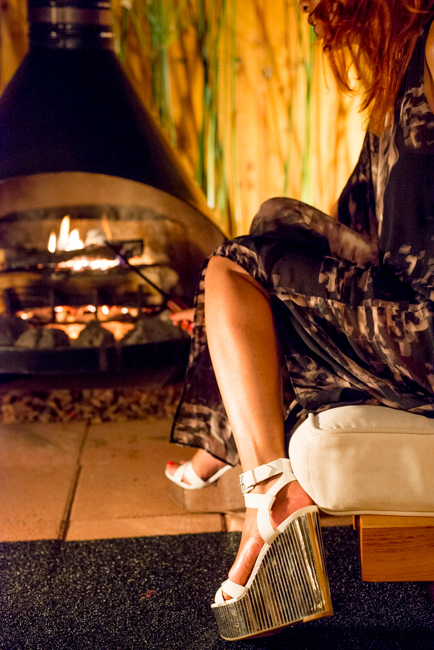 These shoes I like to call…my “disco nurse” shoes. 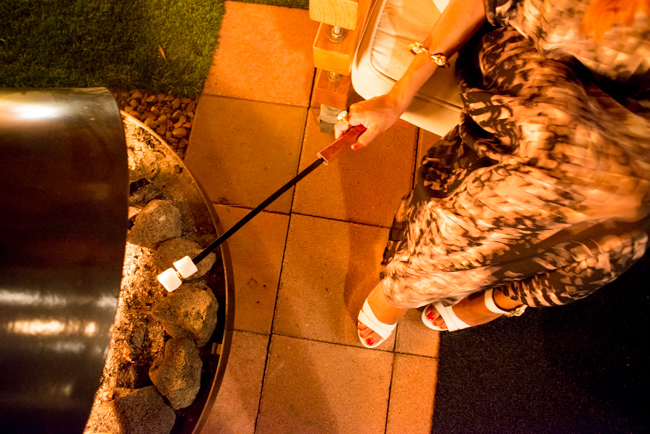 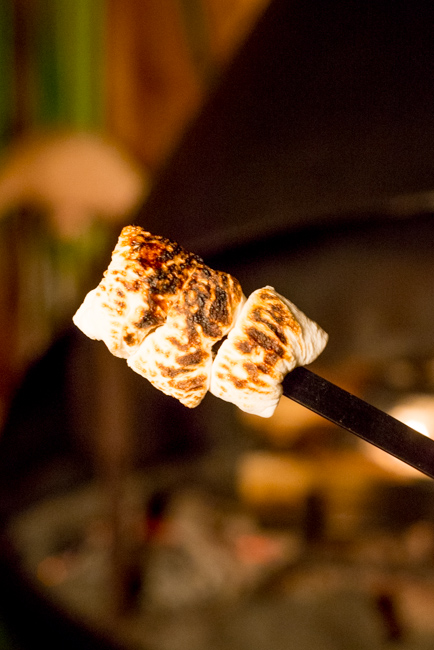 A little char (we think!) adds flavor to the gooey sandwich. 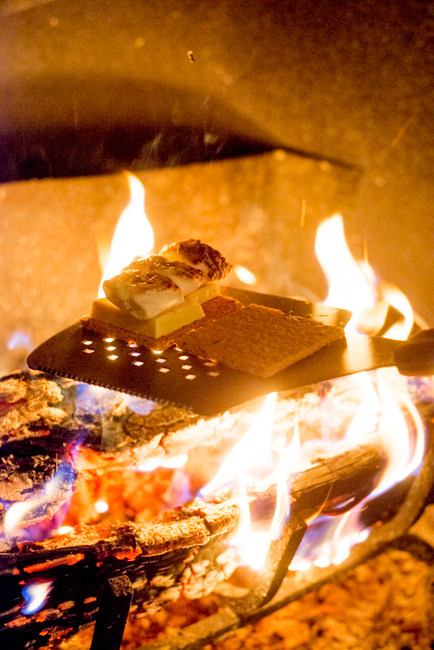 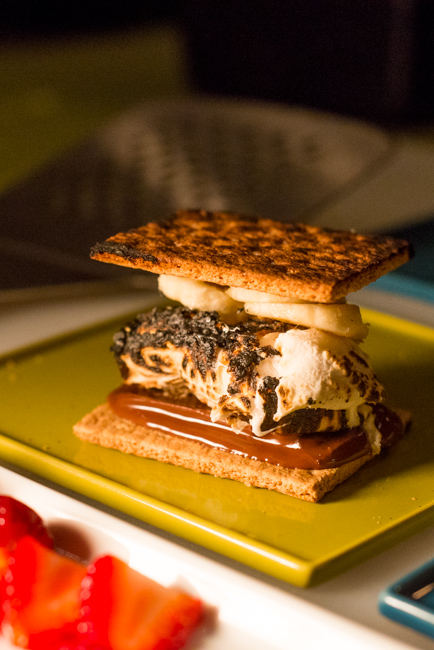 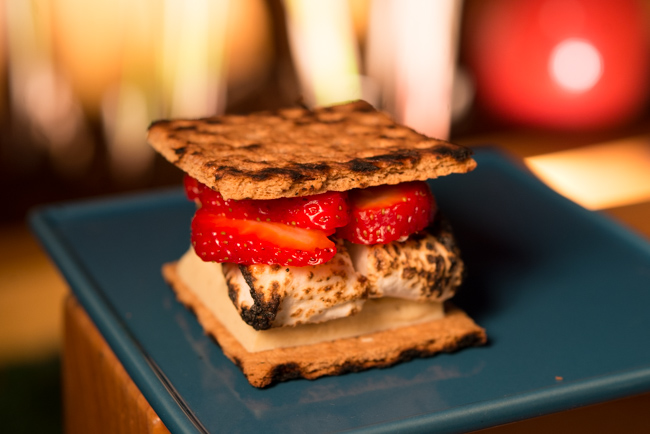 S’more #2: Sliced organic strawberries and vanilla-flavored white chocolate with cinnamon graham crackers and roasted marshmallows sprinkled with ground cardamom. (Believed to be a cooling spice, perfect for summer.) This one was my favorite! 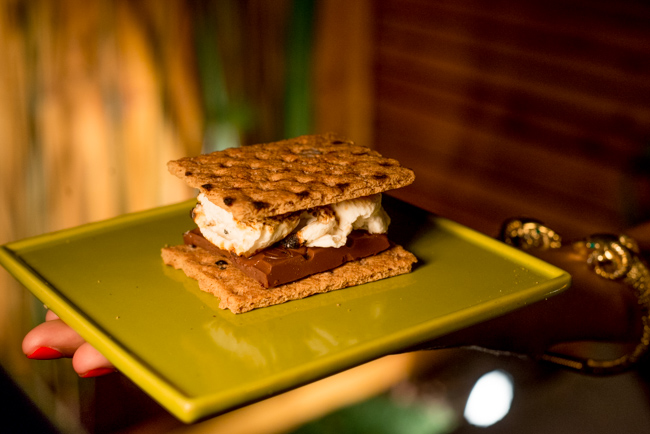 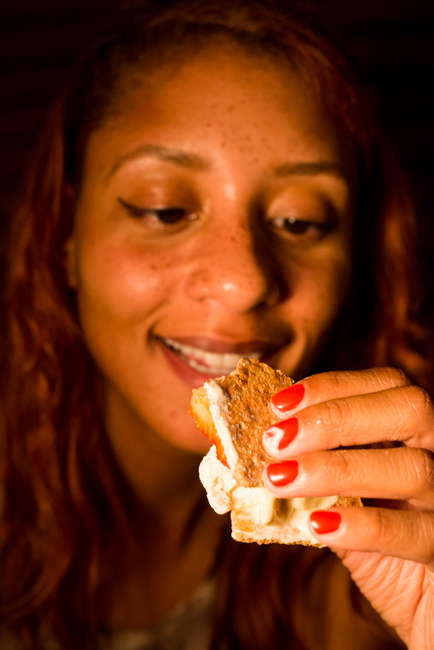 We hope your weekend is nice and funky. Here’s o