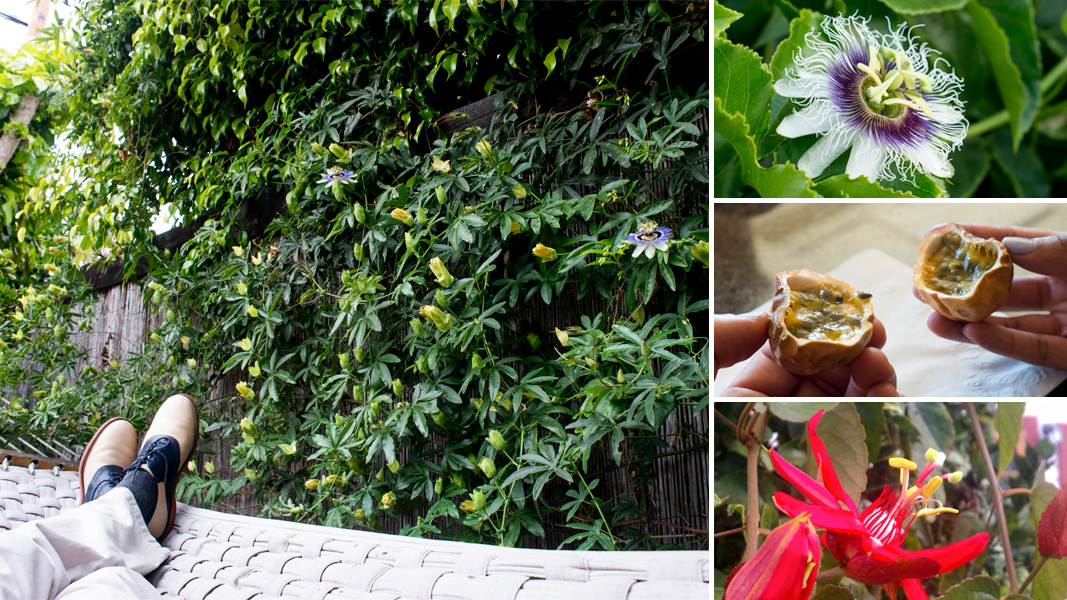 Over on Reddit, Passiflora is arguably the site’s most asked-about plant. What’s not to obsess over? Its flowers are a collision of the eccentric and the symmetrical, suggesting outer-space gardens, the gears of a disco stopwatch. (Not for nothing is it called “clock flower” in Israel and “clock plant” in Japan.)Personally, we love how aggressively 3-D the blossom is: a plate of simple petals gives way to a colorful sizzle of coronal filaments, out of which extend the stamens in a satellite-like formation. There are 500 species in the genus, most of which are vines, and a few of which produce fruit in irresistible flavors.

On a landscape design note — the vines are vigorous and make excellent privacy screens and outdoor wall coverings. We also like to float the cut flowers in glass or wooden bowls of water. 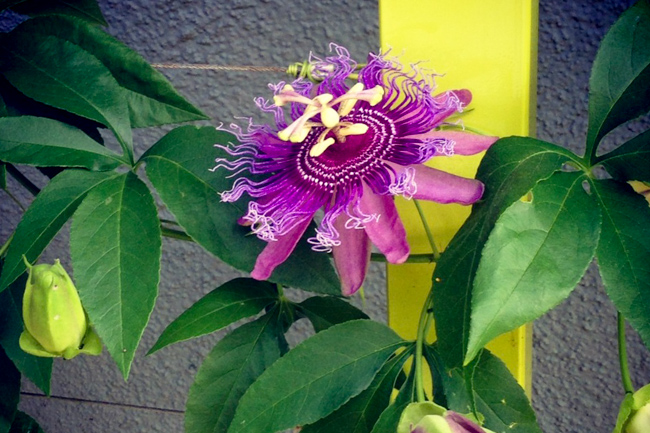 Passiflora ‘Elizabeth’ is a head-turner growing against the bold yellow of this TerraTrellis. (Photo courtesy of TerraTrellis.) 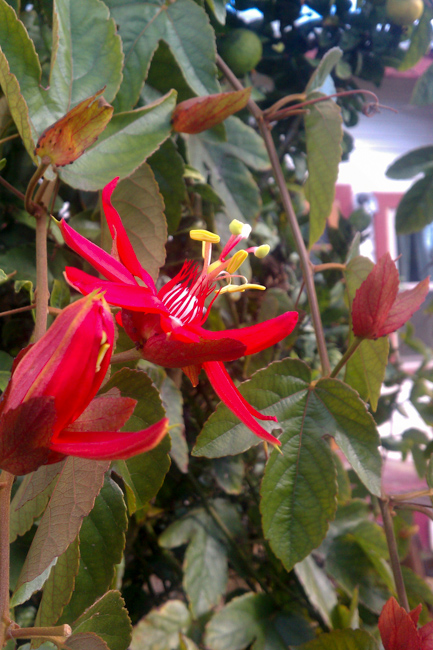 Spotted in the South Park neighborhood of San Diego: The crimson-red Passiflora vitifolia. 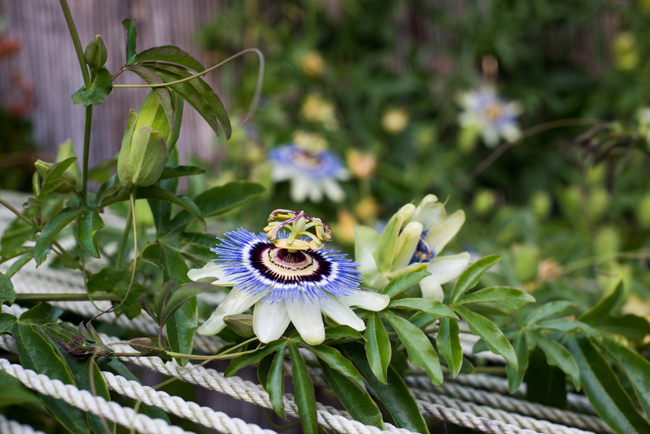 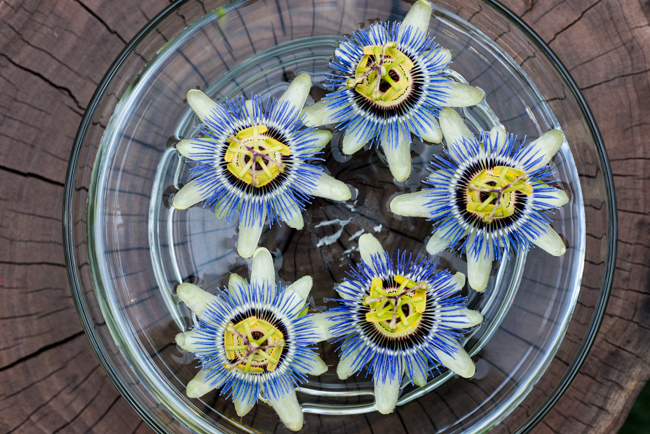 Sometimes we’ll snip our passion flowers and float them in bowls as impromptu centerpieces.

In our zone, the plant flowers in late summer, early fall. We’ve had a lot of luck with our own P. caerulea vine, which originated as a tiny bare-root plant mailed to us by Ryan’s mom from her garden. We planted it along our west-facing reed fence in hopes of hiding the latter’s unfortunate appearance. (A variation on our Hide the Stucco theme.) It took a year for the young vine to grow tall enough out of its partly shaded area to find full sun above the hammock. But when it did, it took off. Within a few months, our fence, the ficus above it, and the strings of the hammock were carpeted in leaves and flowers that spark immediate conversation when guests come over. 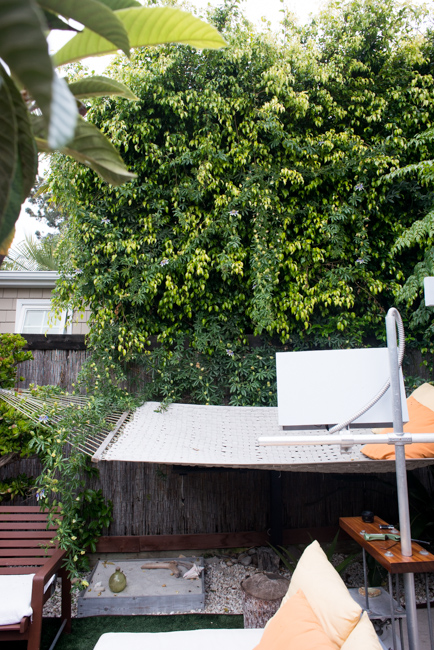 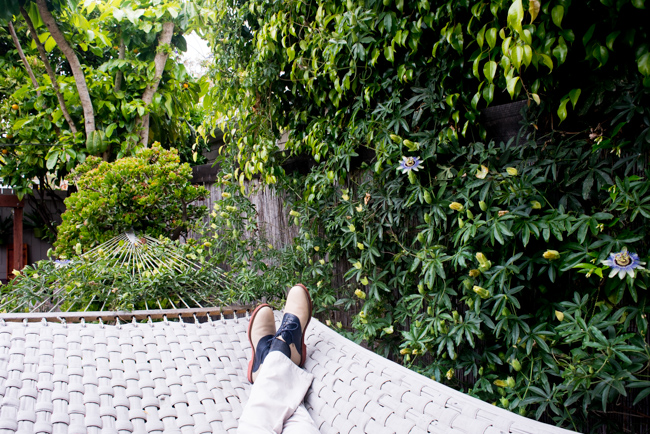 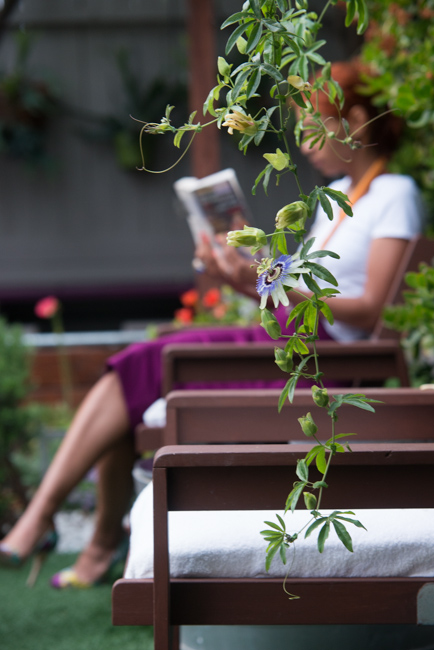 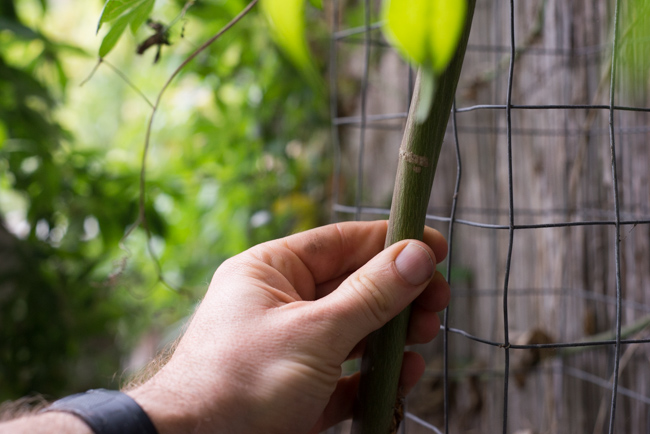 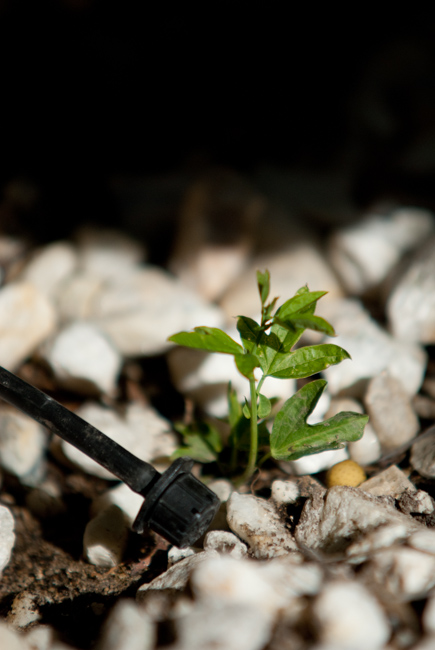 Ryan’s mother mailed a three-inch-long bare-root plant from Leland, North Carolina, in May of 2010. We planted it in a well-drained area of our garden and give it small amounts of water through drip irrigation every other day. We never have had to fertilize it. 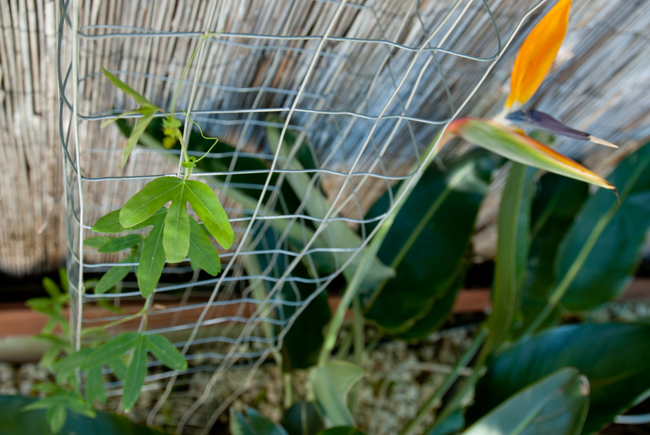 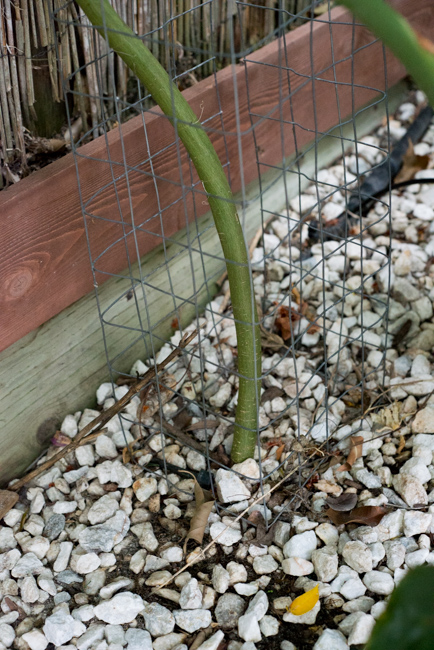 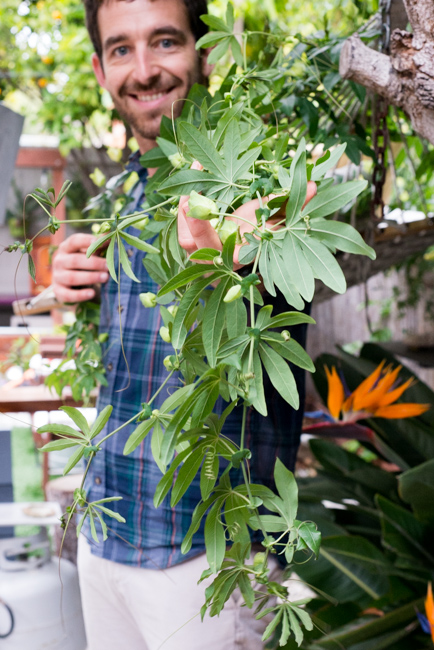 Ryan shows off his flossy Passiflora stole. You like?

Hummingbirds and bees also love ’em, and the plant acts as a love hotel and nursery for the gulf fritillary. The latter’s chrysalis even resembles a dried Passiflora leaf — which is quite the nifty evolutionary adaptation. 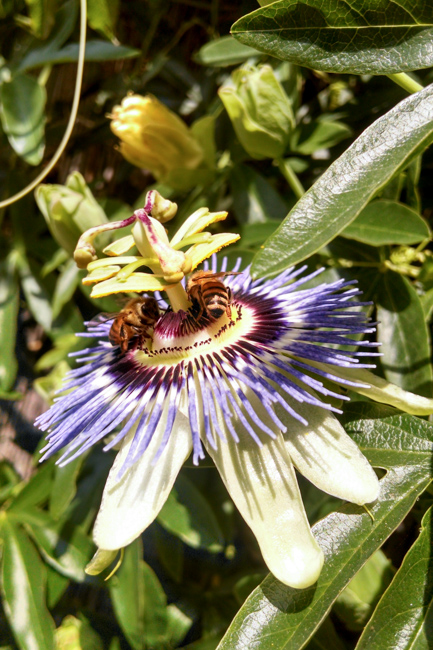 Bees lap up the nectar at the base of the stamen. 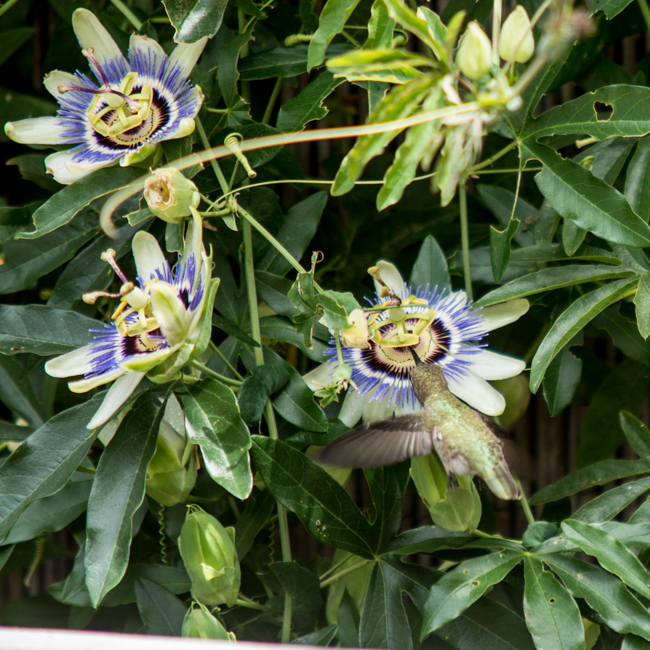 A hummingbird drops by. 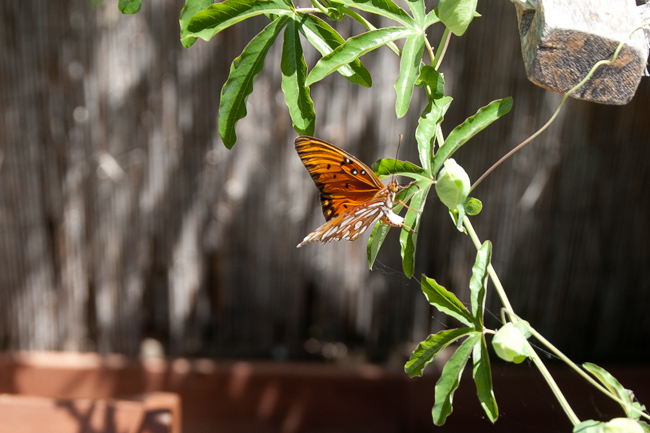 For the gulf fritillary, the leaves of the passion flower plant is a place to mate and lay its eggs. 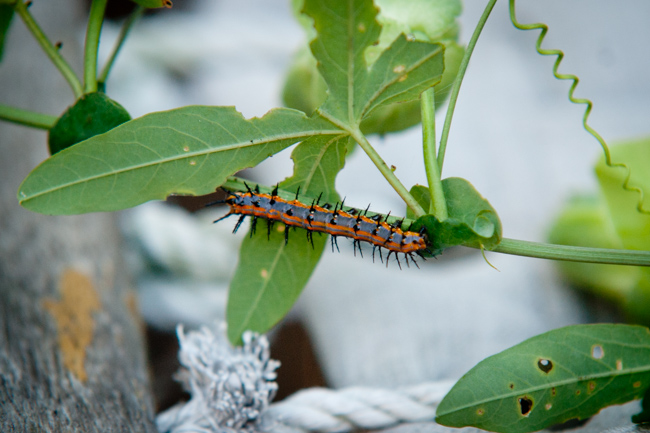 We usually let the caterpillars chomp away before cutting back the vine in December each year to remove all the dead and munched leaves. The vine always springs back with a vengeance.

Now, on to the fruit. Our flowers smell like Sunkist soda, but alas, the fruit they produce (just a single one in four years) are minuscule and tasteless. After a day with Rawvana and a visit to Stone Farms, we were inspired to bring home a more productive Passiflora species to jam with our P. caerulea.

We landed on Passiflora edulis, which produces the juicy, tropical, tangy passionfruit we love, known in Hawaii as lilikoi. We picked up a two-foot high vine of P. edulis ‘Frederick’ last month, and planted it along the same fence at the opposite end of the hammock. It’s already filling out, and beginning its climb. 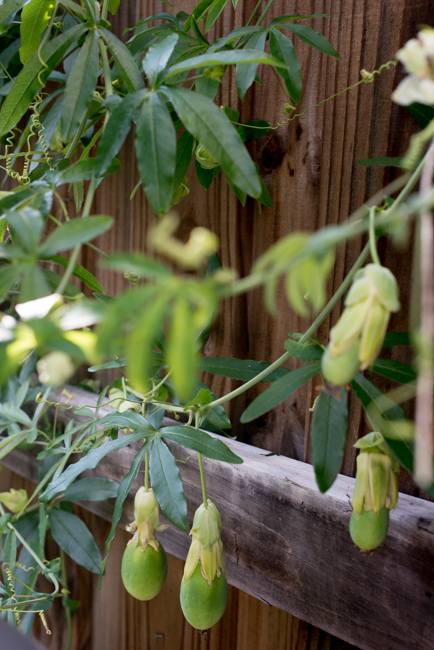 The fruit of the Passiflora caerulea is nothing to write home about. Above is the yield from Ryan’s mom’s plant last June. 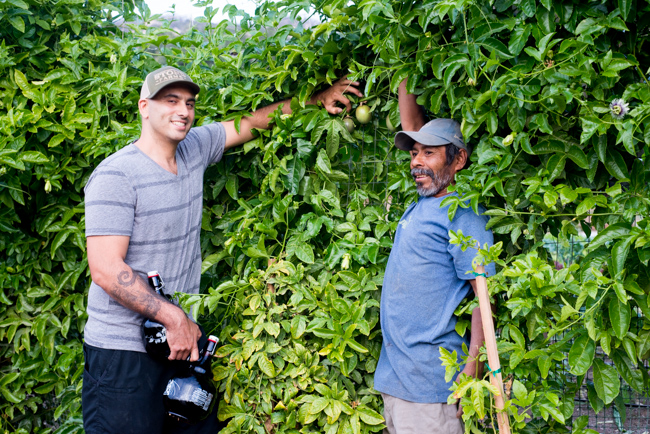 At the other end of the taste spectrum is P. edulis, the passionfruit we know and love — and call “lilikoi” in Hawaii. At Stone Farms in Escondido, David Solomon and ‘El Maestro’ show off their delicious crop. 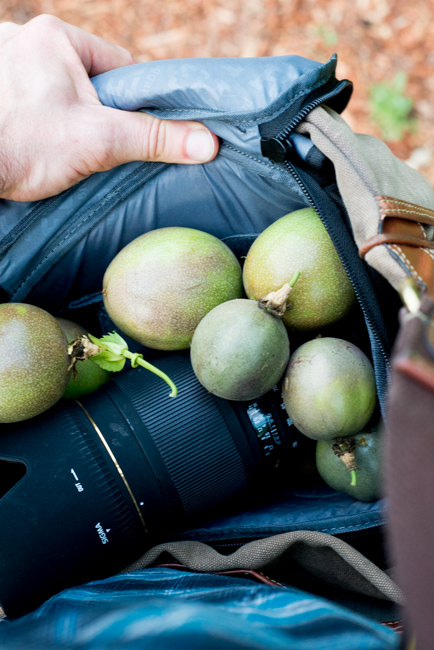 …And they were nice enough to send us home with camera bag full of ’em! We washed the fruit down with some of Stone Brewing’s Smoked Porter. 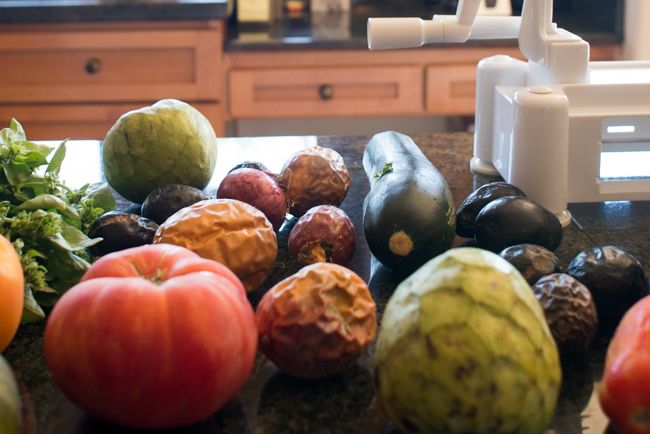 For extra sweetness, Rawvana advised us to wait until they’re nice and dimpled before eating. 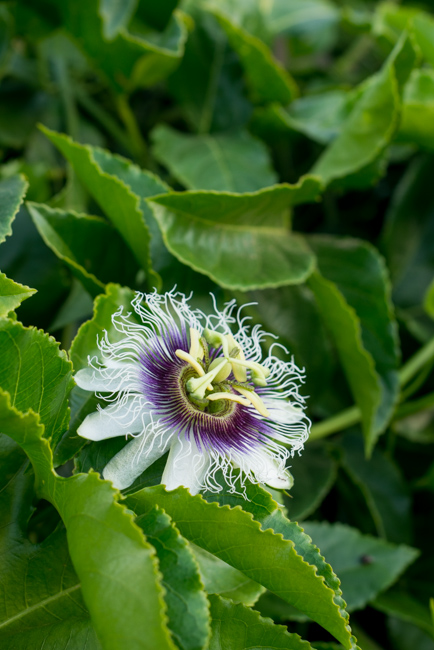 Passiflora edulis ‘Frederick’ is known for its theatrical flowers and tangy fruits. 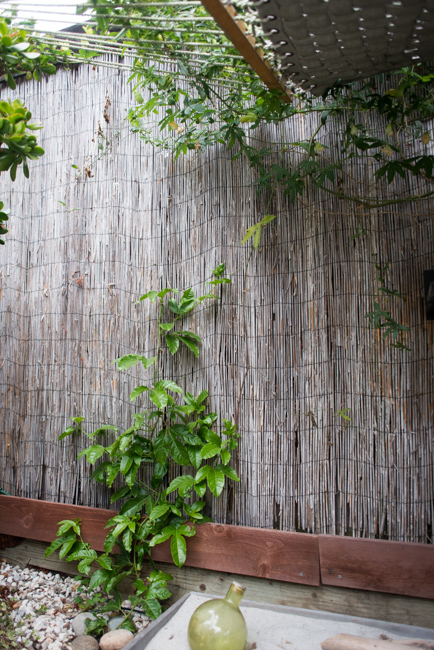 Our junior P. edulis has already began it’s sprawl up the distressed reed fence on the other side of our hammock. Give it three more months… 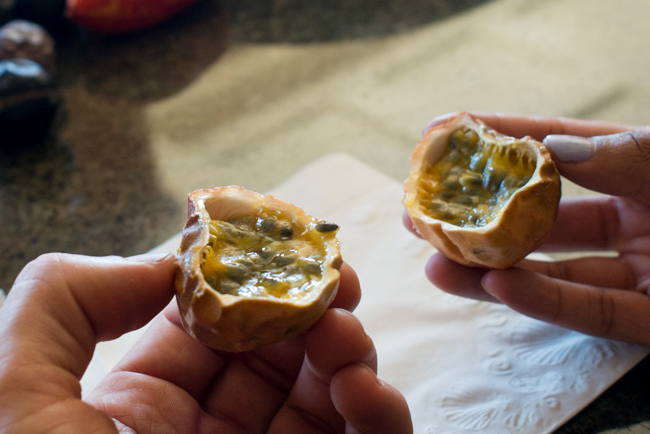 Rainforest caviar, prepare to get eaten.