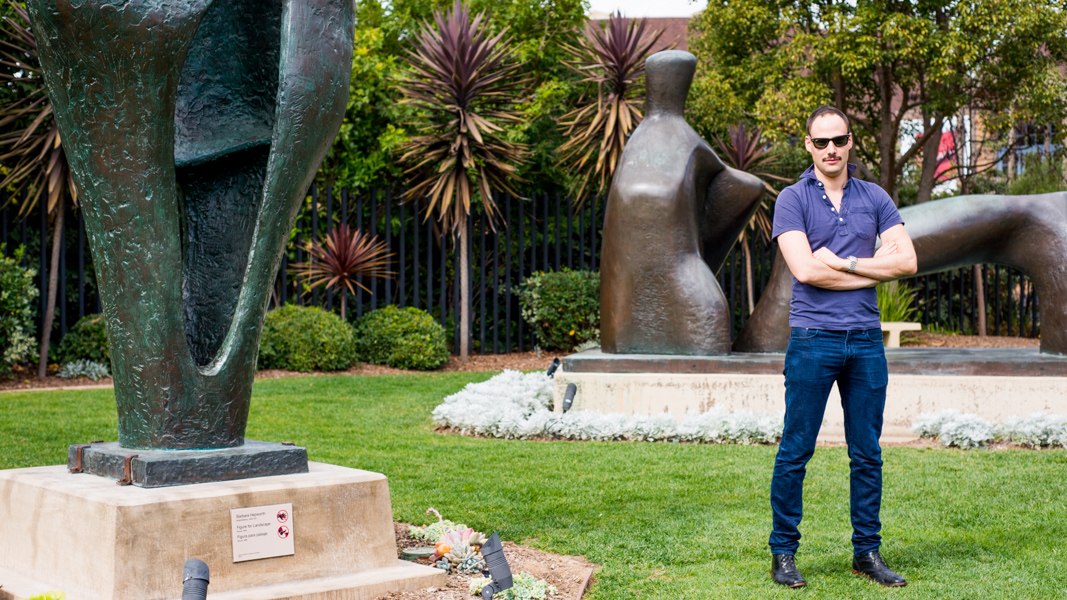 13 Feb A Visit to the SD Museum of Art’s (Renovated!) Sculpture Garden

At the stroke of noon, the California Tower chimes a clever a rendition of the Turtles’ “So Happy Together.” And this certainly feels fitting, because we’re here standing inside the newly renovated May S Marcy Sculpture Garden, watching steel, aluminum and bronze harmonize with trees, shrubs and succulents.

The makeover of the garden, located at the San Diego Museum of Art, was a seven-month-long undertaking. The ground was leveled, benches installed, sempervivum planted, and works weighing over a thousand pounds were relocated. 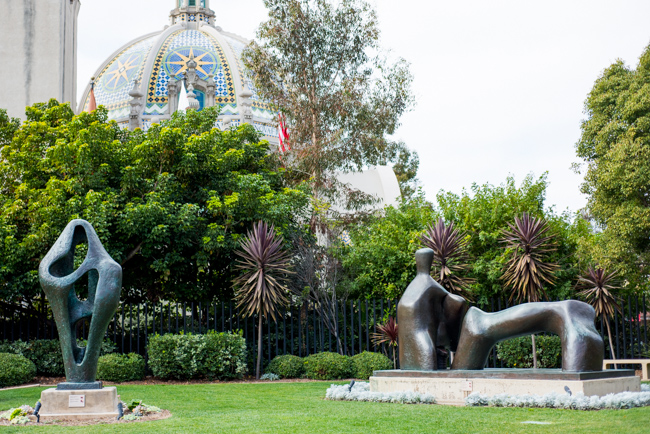 Left, Barbara Hepworth’s ‘Figure for Landscape,’ bronze, 1968; right, Henry Moore’s ‘Reclining Figure: Arch Leg,’ bronze, 1969. The renovation brought these works — by fellow Brits, friends and rivals — side by side. Behind them, a row of bronze-purple cordyline plants complement the sculptures. (Installation view of the May S. Marcy Sculpture Garden at the San Diego Museum of Art.) 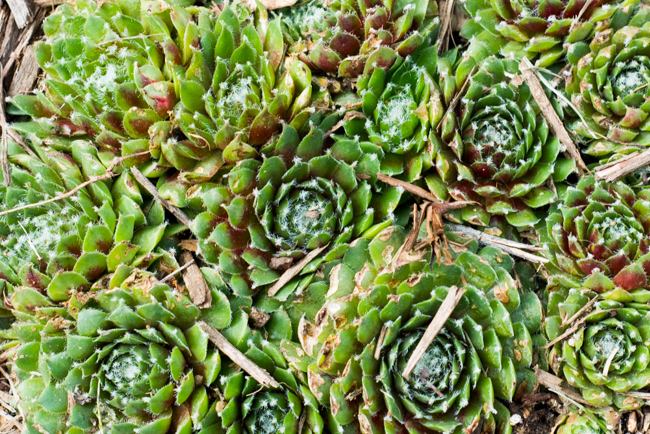 Bunched at the base of the sculptures are succulents like sempervivum (above) and aeonium. 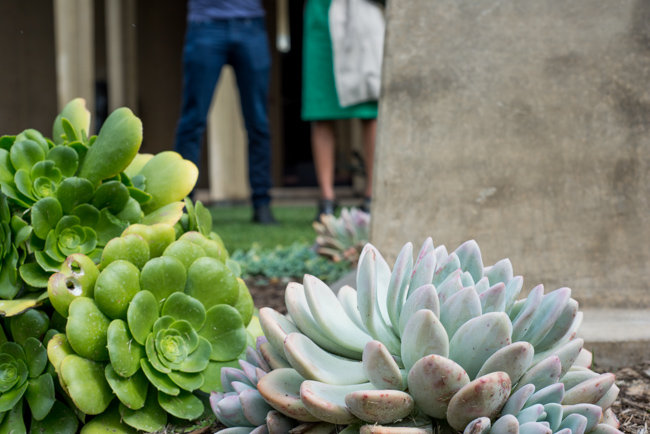 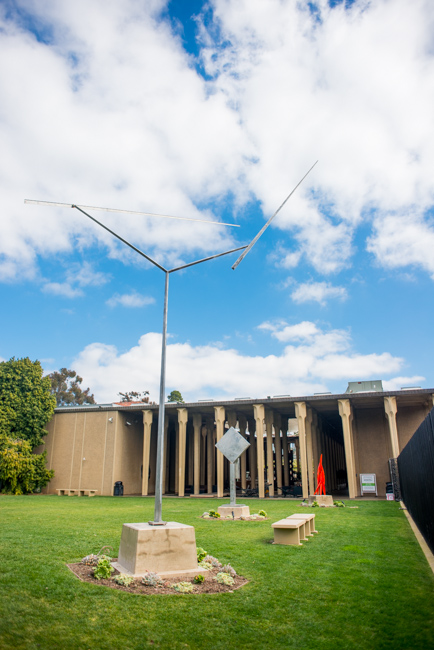 George Warren Rickey’s ‘Two Lines Oblique,’ stainless steel, 1993. In its prior spot, the sculpture would find itself entangled in a fern pine tree. (Installation view of the May S. Marcy Sculpture Garden at the San Diego Museum of Art.) 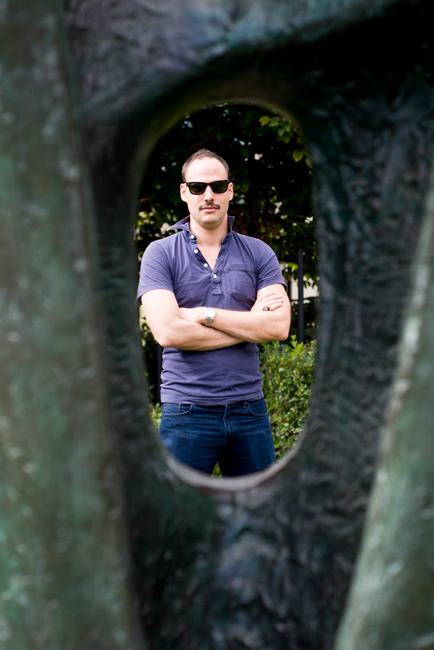 Ariel Plotek, associate curator of modern art at the San Diego Museum of Art. Raised in Montreal, Ariel got his PhD from NYU’s Institute of Fine Arts.

“The Rickey was pressed against a tree,” says Ariel Plotek, above, the museum’s associate curator of modern art. He’s referring to the previous location of George Rickey’s kinetic, wind-activated sculpture Two Lines Oblique. “It was a bit sad because it would get stuck in the branches and couldn’t really move properly. It was begging for a new location.”

Now, he adds, “it gets to spread its wings.”

The garden reopened last September. (Also, remember that night we spent at this museum, boogeying down with begonias?) Other works installed in the sculpture garden include Barbara Hepworth’s Figure for Landscape, 1960; Henry Moore’s Reclining Figure: Arch Leg, 1969; David Smith’s Cubi XV, 1963-1964; and Alexander Liberman’s Aim I, 1980, a new addition since the renovation, a burst of reddish orange against the cool metallics and green grass of its surroundings. The space itself is still a work in progress; two more sculptures, one by Isamu Noguchi and one by Alexander Calder, will be added in the future.

The public can wander around the May S. Marcy Sculpture Garden during operating hours, throw private parties, grab lunch at the café or sprawl out for a picnic. (Mark your calendars for the Artful Cooking event on April 19, with an exploration of the French Impressionists, a cooking workshop and a French picnic luncheon inspired by the works of Monet and Renoir.) The dusty miller, aeoniums and moonstone succulents do triple duty here: They complement the look and feel of the sculptures, plus they lead the eye to the title cards, plus they discourage frenzied art fans from trying to scale the monuments. 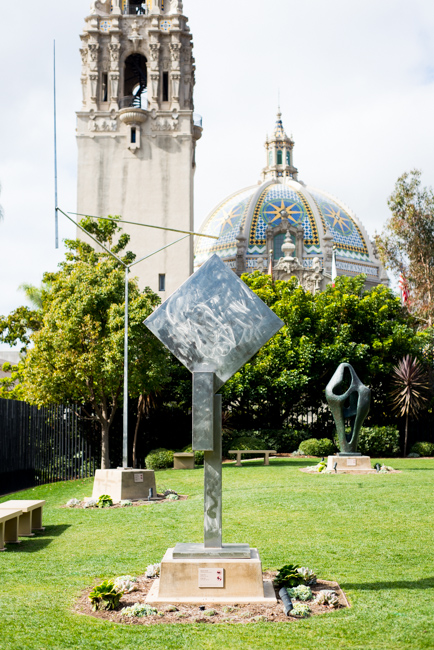 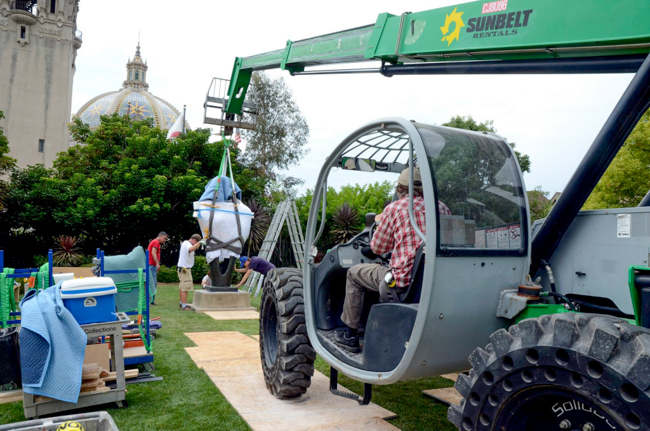 Last year, the 1,200-pound Hepworth piece got moved to its current spot. (Photo courtesy of the San Diego Museum of Art.) 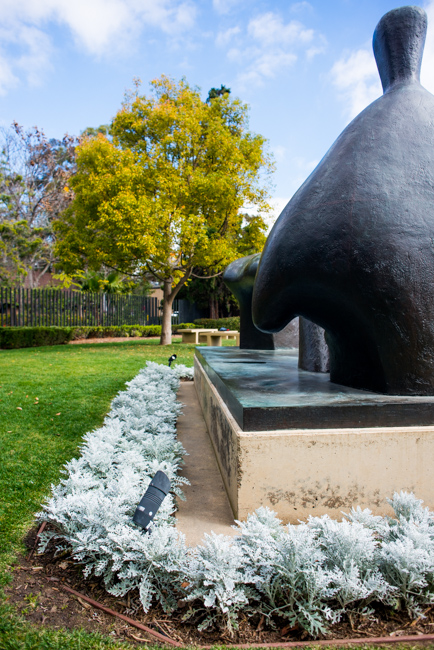 Here, the Henry Moore sculpture is surrounded by dusty miller plants. Many of Moore’s works reference the rolling hills of his Yorkshire birthplace. 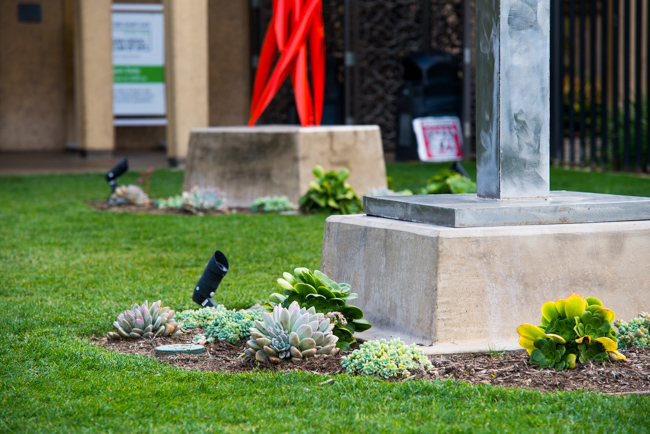 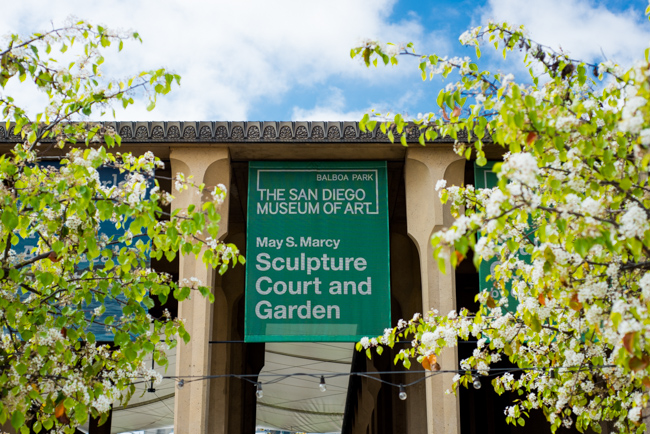 When we stopped by for a visit last Sunday, the evergreen pear trees were in full bloom throughout Balboa Park, and the dramatically puffed clouds gave the works added weight.

We asked, What makes a sculpture ideal for a wide open space like this?

“I’d say very often the fact that [sculptures] were designed to live outdoors in the first place,” Ariel says. “Partly it’s a matter of scale. There is something to be said for these large works that stand in a very different relation to their environment” compared to smaller works. For example: “When they’re large enough to compete with the trees. Or, as is often said in the case of Henry Moore, with the hills.”

Ariel will be curating two exhibitions this spring at the museum, Spanish Sojourns: Robert Henri and the Spirit of Spain and Sorolla and America. As Ariel — engaging, stylish and so erudite — showed us around, we also wondered, How did he come to be here on this beautiful day, talking about monuments and cedars? 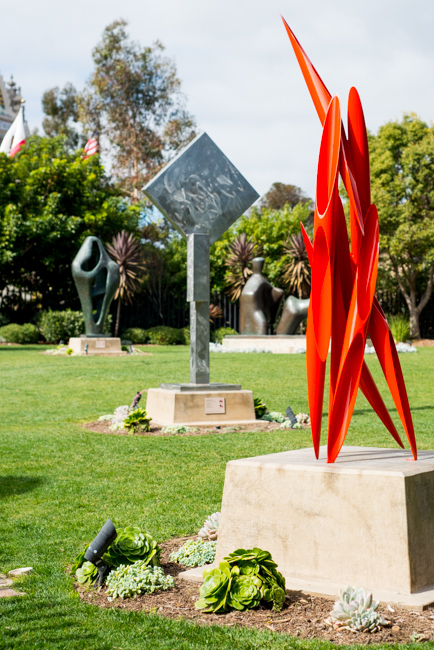 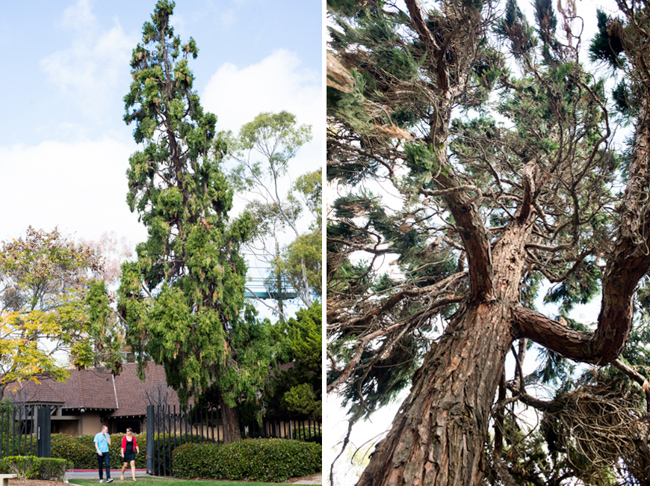 A cedar adds to the vertical viewing.

“I grew up in Montreal,” he says. “I went to college in London at the Courtauld Institute and studied art history there, and then went to the Institute of Fine Arts in New York. My [PhD] dissertation was on French sculpture, and I went to Paris to research it and write it. It was on monumental sculpture, on the theme of allegory and realism. Large-scale sculpture in the 19th century was kind of my thing.”

His favorite artists? “French painters of the 19th century I’m very fond of — Degas and Manet are two of my favorites. But I think I have pretty eclectic tastes. One of the things that’s been nice about this position is that it’s more broadly modern, 19th through 20th century. The art historians I’ve most enjoyed working with have had really broad interests; people who taught me about the 19th century could then turn around and write about Warhol and Picasso.” 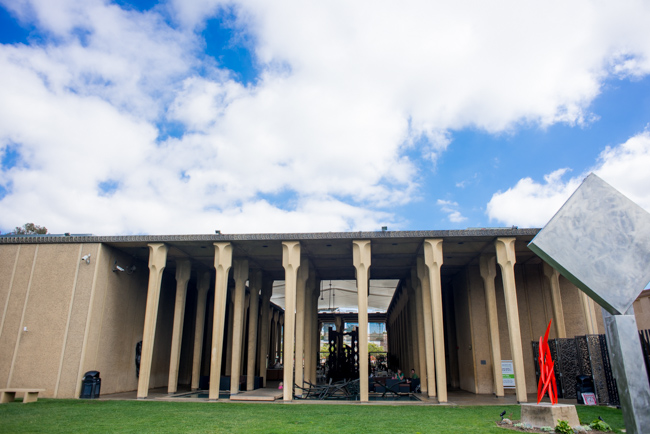 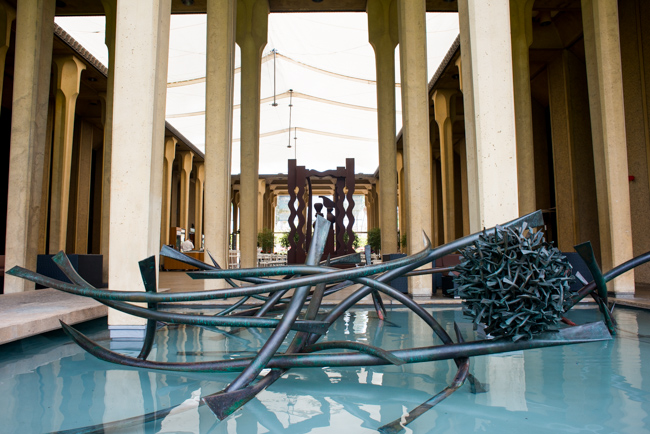 Installation view of Louise Nevelson’s ‘Night Presence II’ at the May S. Marcy Sculpture Garden at the San Diego Museum of Art. 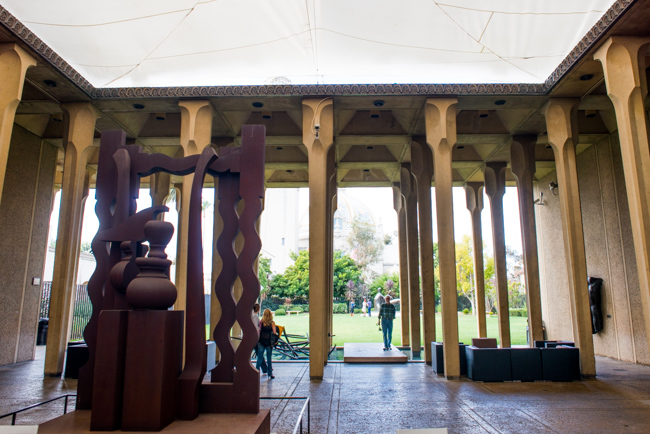 Installation view of Claire Falkenstein’s ‘Accelerating Point’ at the May S. Marcy Sculpture Garden at the San Diego Museum of Art.