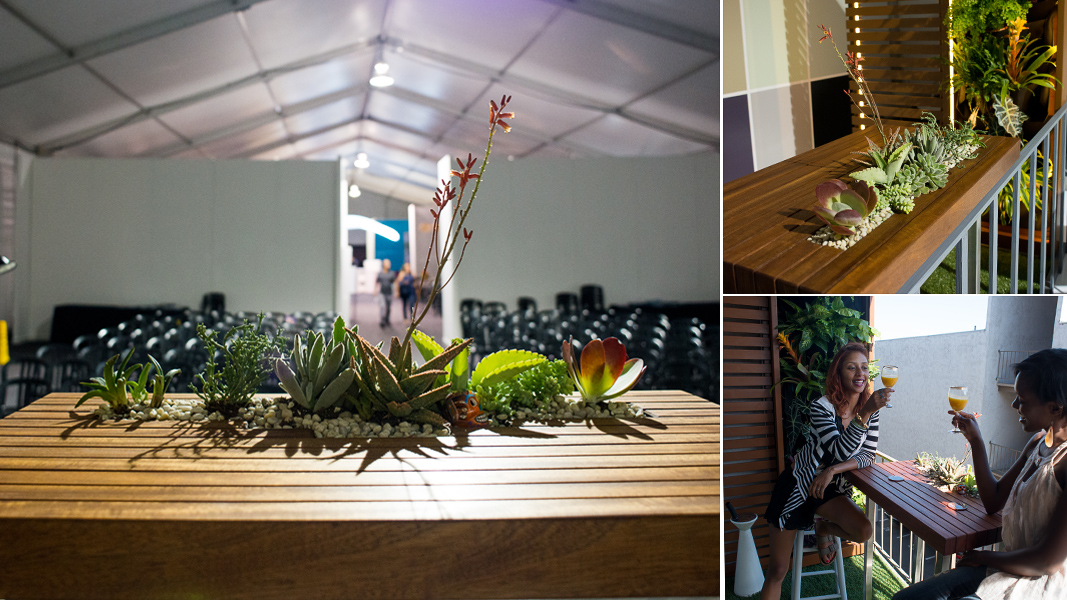 Holy moly, John Gidding is chilling on our balcony right now, was one thought that entered our minds last Saturday evening. The Santa Ana winds were swirling and we were onstage at the WestEdge Design Fair, in the midst of delivering a presentation about design, balcony beautification and why, when you’re faced with concealing a drab fence, you should just put a fern on it.

Who would have thought that two hours earlier we were just a bundle of nerves flying up the 405? Flying up the 405, that is, with a glamorous balcony strapped to the back of a borrowed pickup truck?

Those nerves unknotted themselves a bit when we arrived at the Barker Hangar at the Santa Monica Airport on time. They loosened up even more when we got to work unpacking the balcony before the presentation, and then when we took a breath and reminded ourselves how much we love what we do. 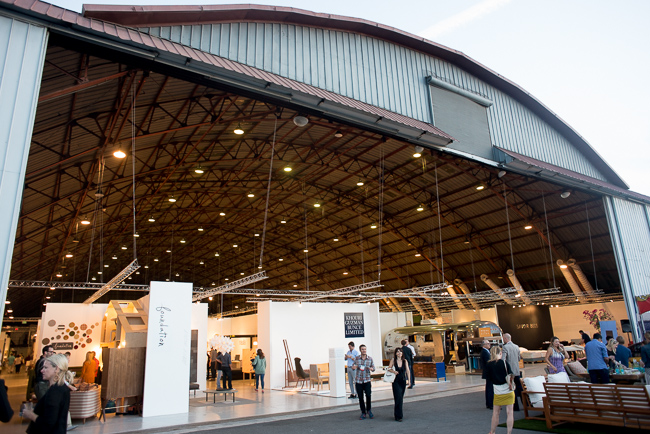 The debut edition of the WestEdge Design Fair took place October 3-6 inside the Barker Hangar in Santa Monica.

In the end, our first presentation ever, “Design Is Yard Work,” went wonderfully. The brilliant and dashing John Gidding — architect, designer, HGTV star — shared the stage with us, and kicked off the session with a presentation featuring some of his favorite residential projects. The slides showcased his masterful sense of scale and an approach to design that feels warm, accomplished, personal and cerebral all at the same time.

Then it was our turn to speak.

Fire up the PowerPoint — we discussed:

– The transformation of our own house from a hodge-podge of bachelor pad/cottage living ideas to a modern space to work, entertain and experiment. (Trips to Palm Springs and LA hotels like The London played a major role, as did the acclaimed L.A. Modern by another WestEdge presenter, Tim Street-Porter.)

– How succulents were the first plants to give us confidence as gardeners — and how their sculptural nature and drought tolerance make them great additions to modern gardens in Southern California.

– Why you should ditch the taboo around turf and embrace fake grass, which looks great when you treat it like an outdoor area rug.

– How to cover up drab fencing or unimpressive stucco using vertical gardening techniques.

– Why nepenthes pitcher plants are bursting with landscaping potential, why we planted them next to a shower, and how the cups get so big in the Borneo jungles that travelers drink from them and rats get trapped in them. (Hopefully not at the same time.)

– The importance of color temperature when lighting your garden. We prefer our LED strips at a warm, golden 2700K.

– How to make your outdoor heater just as beautiful as the rest of your furniture. 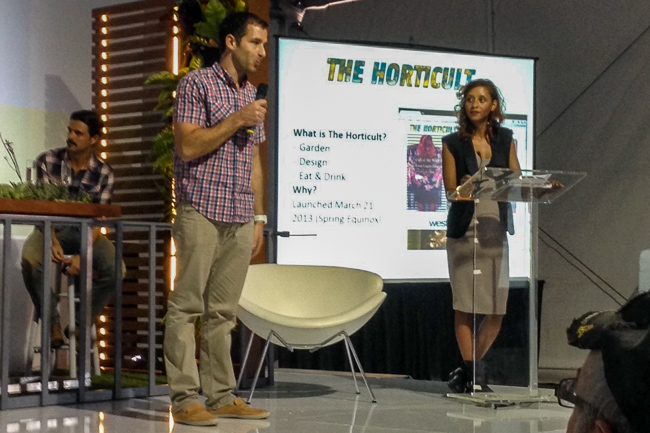 Our friend Jennifer Gilbert Asher (of TerraSculpture!) snapped this pic from the audience. On the far left is John Gidding.

The balcony that Ryan designed and built is a showstopper. The installation — which we ultimately moved into our friend’s Culver City balcony — included a living wall (overflowing with shade plants like dracaena, bromeliads, hosta and ferns), gloriously artificial turf, a slat façade illuminated by LED lights, wall-mounted herb pots made from military surplus ammunition cans, and a gorgeous succulent planter table built from sipo, a mahogany alternative. 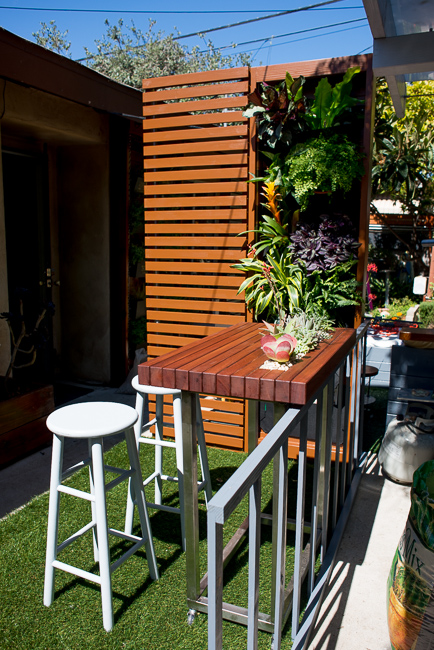 First, we staged our balcony design in our own yard… 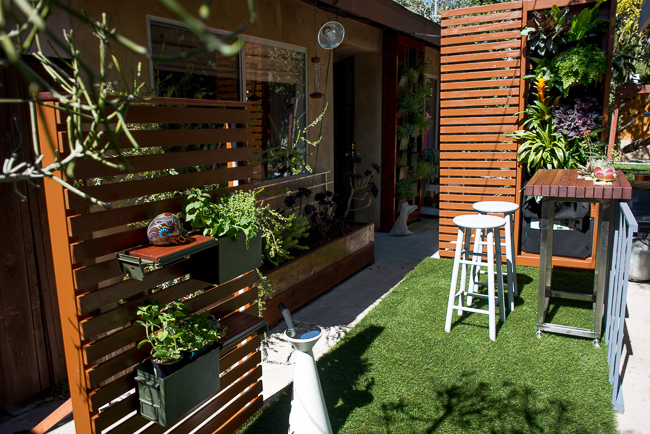 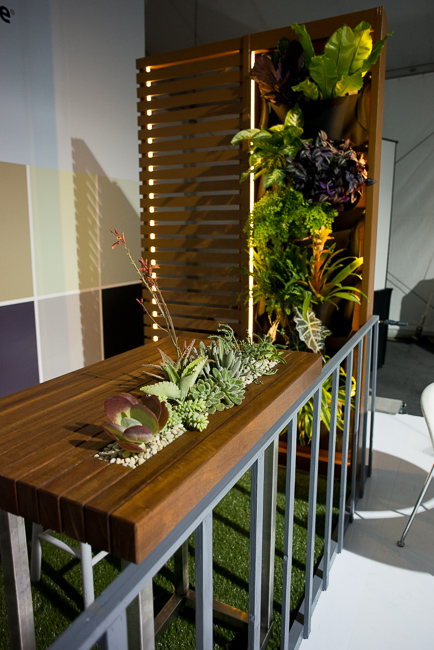 Then we installed it on stage at the WestEdge Design Fair theater! 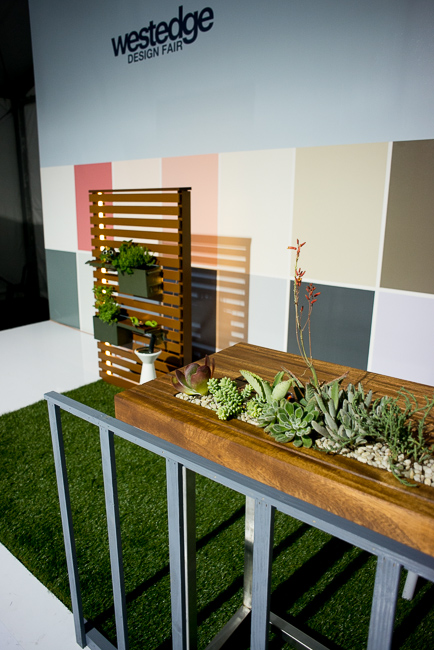 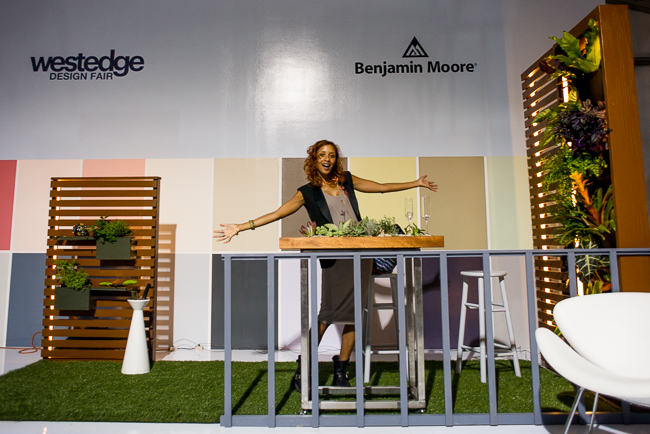 For the stage, we even built a mock railing! In styling up our vignette, we brought in stools, Day of the Dead skulls and Pellegrino-filled champagne glasses to show what personal touches we’d use to make this balcony our own. (“Oh, good — I was about to say, ‘Chantie just drank half a glass of champagne on stage!” our friend Mani said afterward.) When John took a seat inside our “balcony” for the rest of the presentation, let’s just say our hearts skipped a handful of beats.

Another gratifying moment came when members of the audience made a beeline for the stage to chat with us after the presentation. We closed the night by venturing out to the floor to meet the show’s exhibitors, and made a return trip the next day. Our favorites included the luxuriously inventive lighting of LA-based Zia•Priven (husband-and-wife team Paul Priven and Marcia Zia are also two of the coolest, kindest people you’ll ever meet); the delicious leathers of Moore & Giles; the sensual live-edge furniture of New York-based Sentient, the Southwest Greens artificial lawn company, and Purcell Murray’s mobile-operated TopBrewer espresso machine worthy of James Bond. The high-tech sleek Algarve terrace cover system caught RB’s attention.

When we weren’t design-gawking, we were installing our own pieces into the second-floor balcony of our friend Laju Obasaju’s apartment. Meaning this little outdoor room has been moved (either into or out of a space) a total of four times in less than 24 hours. Stay tuned for a story that goes further in depth about each piece for the terrace; until then, you can see photos of the balcony in situ further down the page.

Let’s stroll the stalls, shall we? 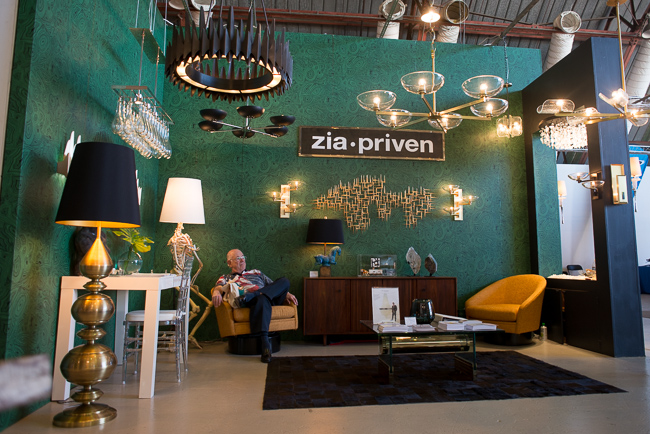 We were immediately drawn to the glam, industrial lighting of LA-based Zia-Priven. 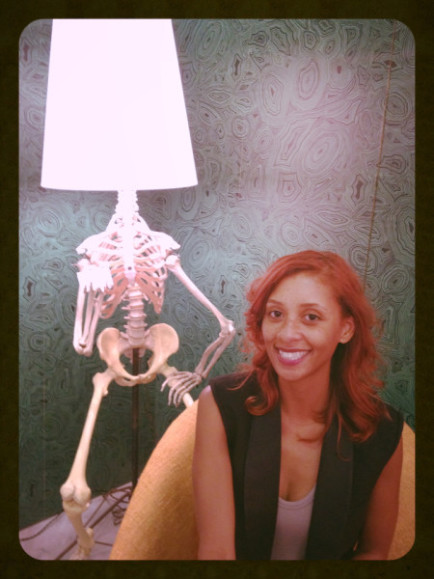 Hanging out with Philippe the lamp, also at Zia-Priven. 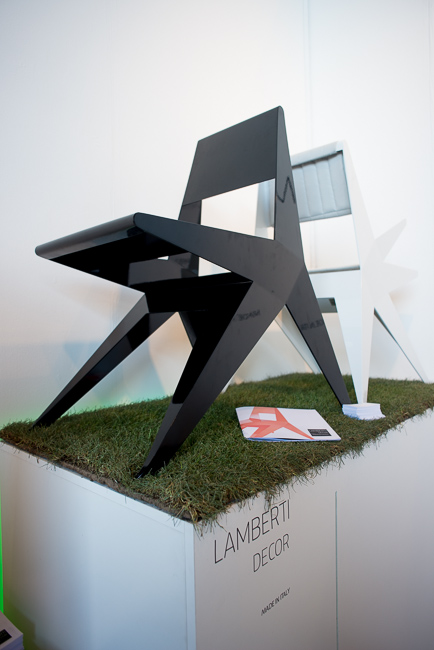 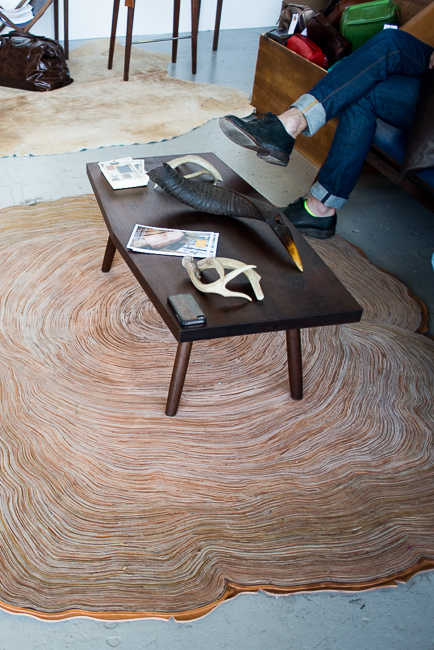 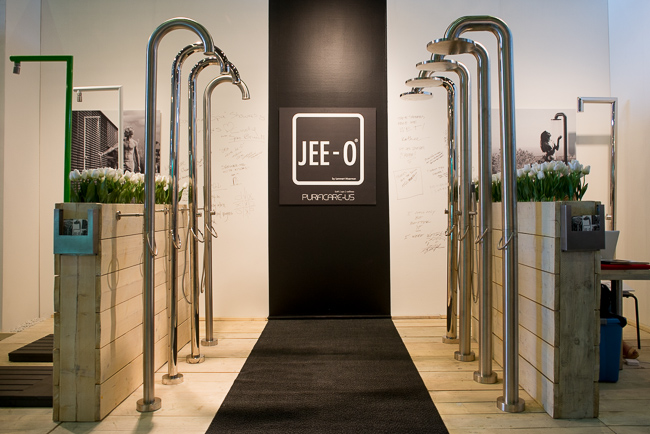 Purficare-us showed off their Jee-O outdoor showers which were a big hit at the fair. We love this minimalistic design for the garden. 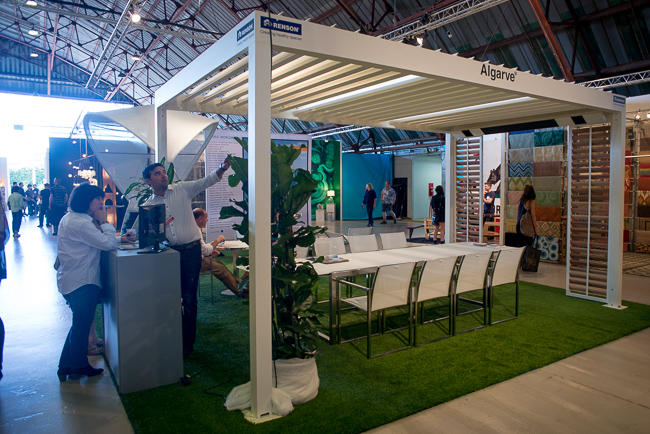 RB was drawn to this outdoor terrace cover system by Renson. 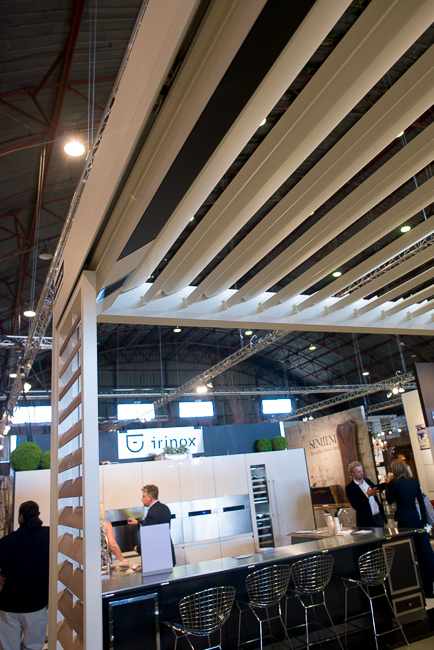 The Algarve terrace cover system consists of controllable rotating blades.  The blades have small gutters for drainage and some were outfitted with LED lights for nighttime. Also, the frame was equipped with an integrated sound system hidden into the design. Brilliant! 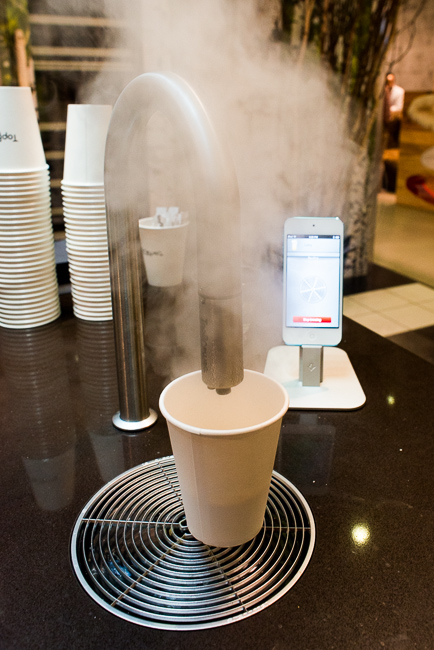 This iPhone-controlled TopBrewer whips us up a latte. 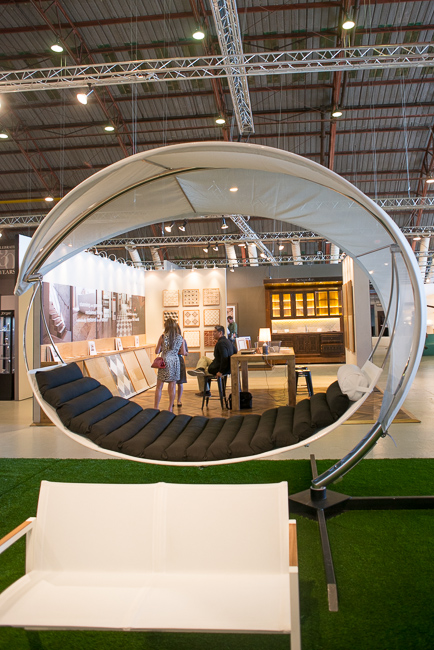 ‘The Wave’ hammock by Royal Botania was a huge hit among showgoers. 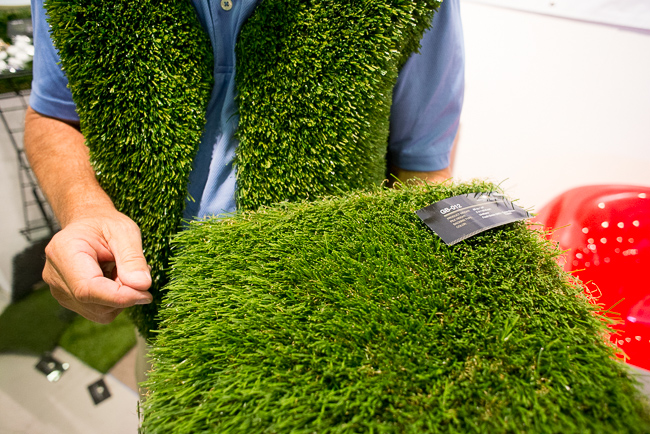 Another favorite: Southwest Greens and its soft, high-quality turf. 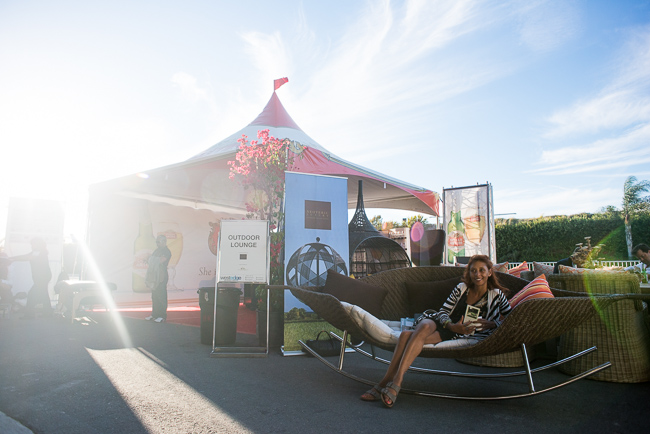 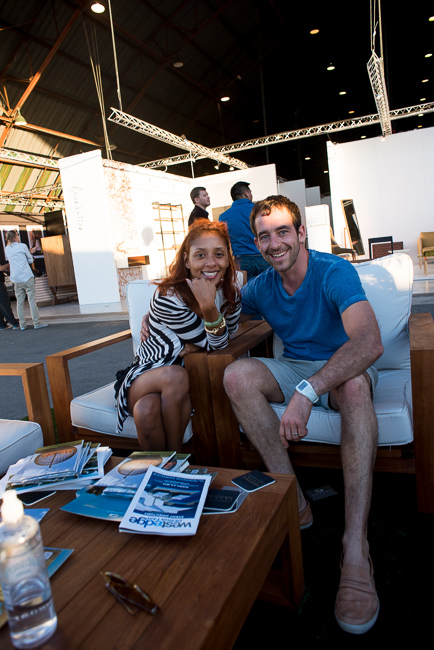 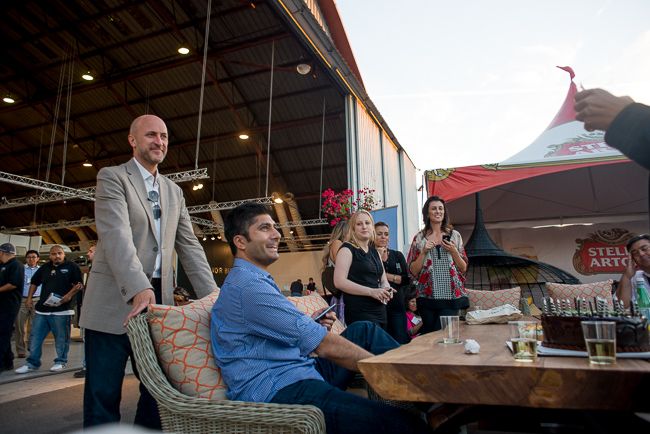 On the far left, Troy Hanson celebrates his birthday on the last day of the fair. With Megan Reilly, Troy co-founded the WestEdge Design Fair after launching and producing the Architectural Digest Home Design Show in New York. 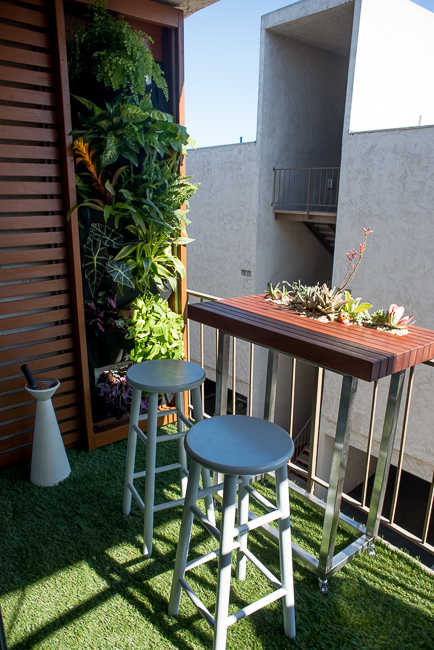 Finally, the balcony arrives at its Culver City home! 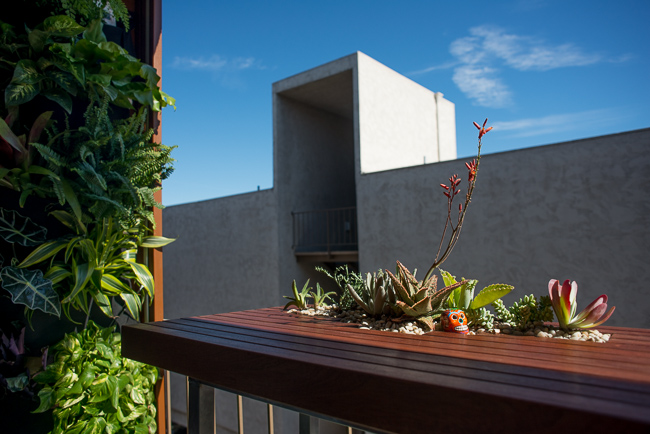 Succulents used on the table include crassula, aloe and donkey tail. Shade plants in the vertical planter include bird’s nest, maidenhair and sword ferns, alocasia, bromeliad, hosta and dracaena. We realized that there is too much direct sun on the shade plants so we’ll be adding a shade visor in the near future to keep these leafy plants from burning up! We also are working on a balcony watering system that will keep these plants thriving when our friend Laju is out of town. 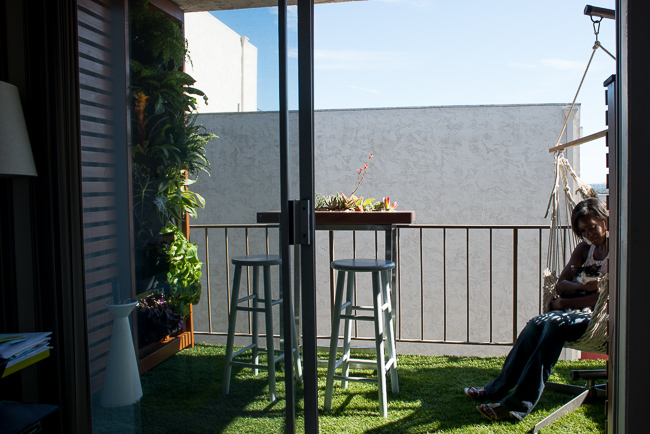 Laju introduces her cat Dexter to the new balcony. 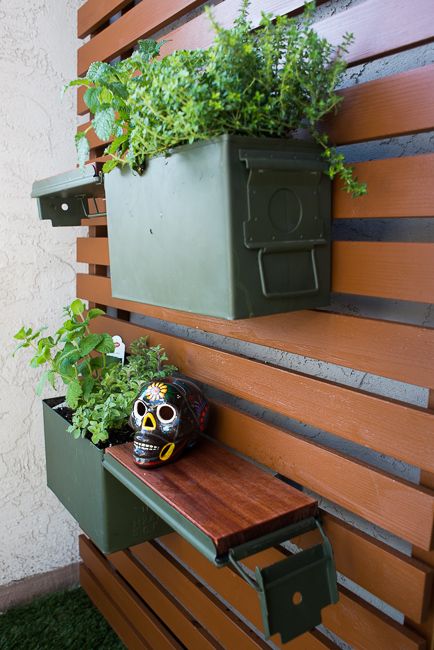 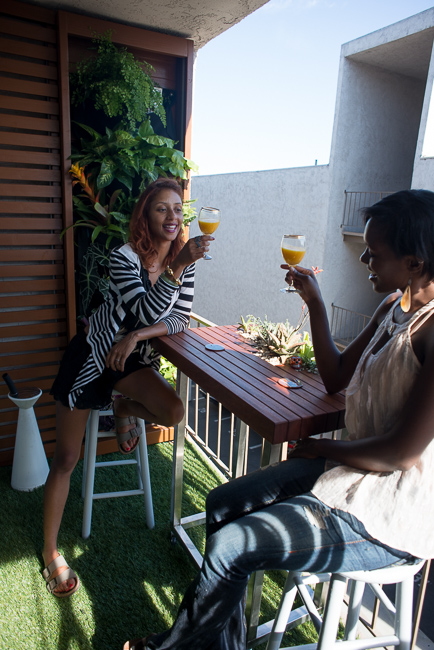 Our heartfelt thanks to Laju Obasaju, John Gidding and the entire WestEdge Design team! —TH