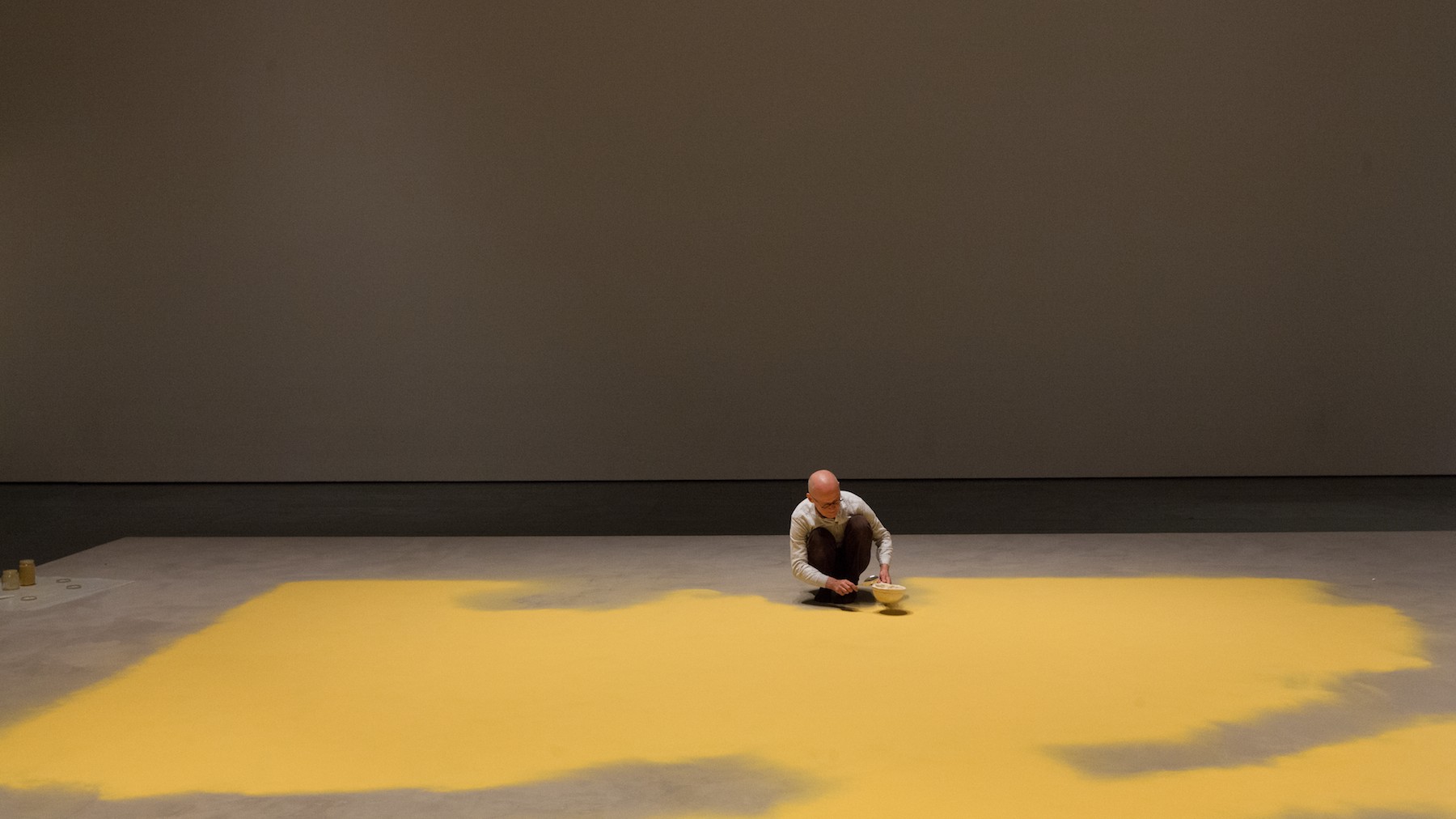 25 Jan What We Read This Week: Painting With Pollen, Trees at Dior and the Queen-Sized Camellias of Eudora Welty

✚ Flavorwire, a great place to explore stuff you’ve always wondered about and didn’t even know it, recently ran a story about plant furniture. We’re not talking garden benches here; Asif Khan’s Harvest Table (and Harvest Chair!) are actually composed of freeze-dried flowers. Plus there’s a bathmat made out of moss by Nguyen la Chanh and a winsome dandelion light by Lonneke Gordijn, among others.

Flavorwire also reports that Wolfgang Laib’s Pollen from Hazelnut exhibition has just opened at MoMA. The installation consists of caution-yellow pollen that has been “painted” by Laib onto an 18-by-21-foot space (above).

Laib collects the hazelnut pollen in the early spring through early summer outside his studio in southern Germany, and has been doing so since the 1990s.

This wondrous video lends some insight into Laib’s process and perspective: he sees pollen as the life-giving foil to the death he witnessed as a med student many years ago. (Image credit: Jason Mandella via MoMA)

✚ A few of your burning questions about birds were answered this week over at A Way to Garden, the leafy labor of love by gardener, author and former Martha Stewart editorial director Margaret Roach. Roach chats with Ellen Blackstone of BirdNote about why small birds gang up to chase after big ones, and how the woodpecker’s skull prevents it from getting a migraine even after it’s been knocking on your roof for a half an hour. (If only us humans were so lucky.)

✚ The crack bloggers at Gardenista pubbed a gorgeous piece on the late Eudora Welty’s garden in Jackson, Mississippi. The towering Southern writer often evoked flowers in her fiction, from the dirty zinnias (“each petal is a little heart-shaped pocket of dust”) in “Old Mr. Marblehall” to the “soft pale petals” and “hairy hearts” of the mariposa lily and the “naked, luminous, complicated” night-blooming cereus in The Golden Apples.

Pink nicotiana, roses, rhododendrons and camellias dominate the space today, as beautifully chronicled in the book One Writer’s Garden by Susan Haltom, Jane Roy Brown and photographer Langdon Clay. (In the comments section of a post on the Paris Review, Haltom relays how Welty would compare early-blooming camellias ravaged by a late-season freeze to “watching a ship go down while the band was playing.”)

We also love the anecdote in the Christian Science Monitor about how Welty’s mom would send boxes of camellias during the winter to her daughter while Eudora was a grad student at Columbia. Welty later did the same to cheer up snowbound Yankee friends, wrapping the stems in wet cotton and “sew[ing] the stems to the inside edges of the boxes so they wouldn’t jostle and hit each other.” (Image credit: Eudora Welty House Museum/Facebook.)

✚ For most of us, our spring bulbs are tucked away inside their beds. But, also on Gardenista, Erin Boyle is forgoing the fretful suspense of winter by forcing her paperwhite bulbs in antique bottles filled with water. She chose symmetrical ones “so they would be less likely to lean to one side after the shoots began to grow,” and the effect is lovely.

✚ Meanwhile in Paris, the haute couture shows are on. The House of Dior, in the third outing of its new designer Raf Simons, presented the Spring/Summer 2013 collection in a sparse garden setting inside the Tuileries. The only plants present were alder trees and dwarf Buxus microphylla “Rococo” box shrubs.

The effect of the models gliding between the clouds of green and severe wooded lines is intoxicating. On the Dior site, landscape designer Martin Wirtz explains the concept. (Image credit: Christian Dior/Facebook.)