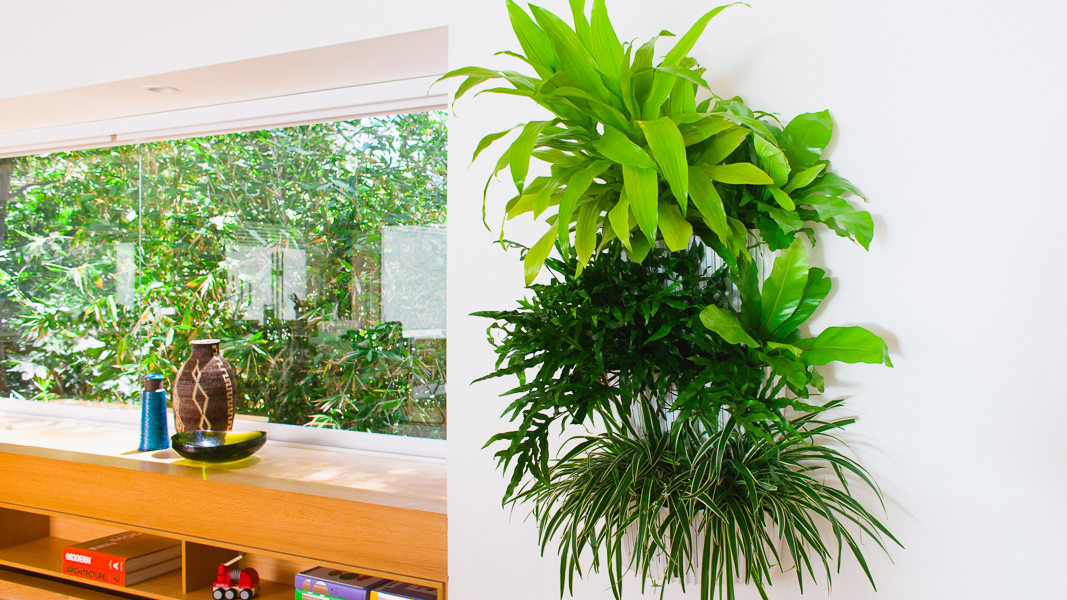 14 May Woolly Pocket Co-Founder Miguel Nelson on New Products, Overachieving Agave and the Return of the Houseplant

Cohabitating with plantlife just does something to you. It clears your head, makes you happier, opens you up to nature’s quiet quirks. We’ve believed this since before we moved into our current house and garden — even back when C was living in a tiny Koreatown studio with just a dracaena to her name. (Which is still going strong in our living room!)

Woolly Pocket believes in bringing people and plants together in a big way. Make that: in a vertical way. Since it was founded in 2009, the L.A./Phoenix-based company has been making breathable, moisture-controlled pockets that have put vertical gardening within reach for anyone with a few square feet of wall space.

“We’d seen living walls before and were really fascinated with them. We set out to find a living wall system that would work for us,” says Miguel Nelson, who cofounded the company in 2009 with his brother Rodney. “We considered a lot of options, and had this idea to make a pocket that, as far as I know, has never been done. Using homemade felt pockets, my wife and I covered our event spaces with plants during 2007 and 2008. This inspired me to start Woolly Pocket with my brother in 2009.” 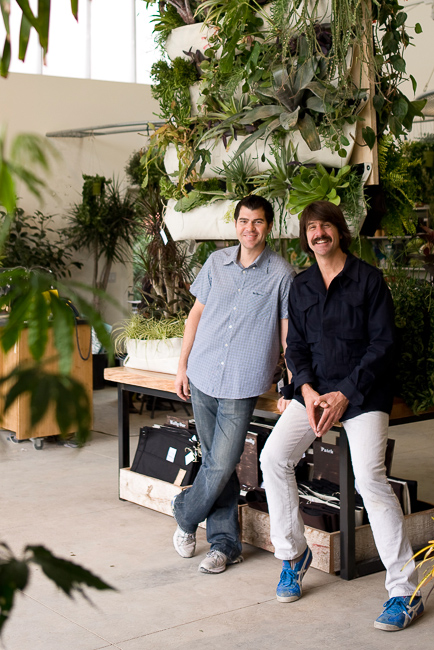 From left, Rodney and Miguel Nelson

Nelson and his wife Sherry Walsh own stylish L.A. event spaces SmogShoppe and Marvimon, which provided room for the earliest experiments. (Coincidentally, we witnessed our friends the Banzalis get hitched at the latter, in front of a succulent wall, back in 2008.) Today, private homes, schools, clubs (like Soho House LA) and restaurants around the world are using Woolly Pockets — U.S.-made from recycled plastic bottles — in their sky-high horticulture.

We recently caught up with Miguel to chat about the company’s newest product, his horticultural aha moment, why plants scare us, and a few species that really come alive when they go vertical.

Success came quickly for Woolly Pocket. How did the word start spreading?

In 2008 we built our second space, called SmogShoppe, in Culver City and totally covered the walls with plants. Both spaces [Marvimon and SmogShoppe] are about 7,000 square feet each, half inside, half outside. Marvimon’s main living wall is 18 feet tall and 30 feet wide. SmogShoppe’s living wall is double sides, and about 100 feet wide by 15 feet tall. The exterior is on high-traffic La Cienega Boulevard and was noticed by many folks who wanted their own.

We started getting a lot of inquiries — designers that wanted to use them, TV shows that were interested in them. [In developing Woolly Pockets], we talked to horticulturists. That’s why they worked so well — the felt was a breathable material, which meant that the roots were able air prune and don’t become pot bound, because we had this internal moisture barrier acting like a reservoir. We were the first and only modular, breathable and self-watering living wall system on the market. As far as I know, we are still the only modular, breathable living wall system on the market.

Did you grow up around plants?

We grew up in the desert, in Tucson and Sedona; our parents didn’t really garden at all, but our grandparents were avid gardeners. My grandmother could grow anything — plant a seed and all of a sudden she had a lime tree. I felt an affinity with anyone who was into the Earth. My brother [who lives in Phoenix] has a big green thumb — he’s kind of nutty with it. All his plants have plaques with their Latin names on them. 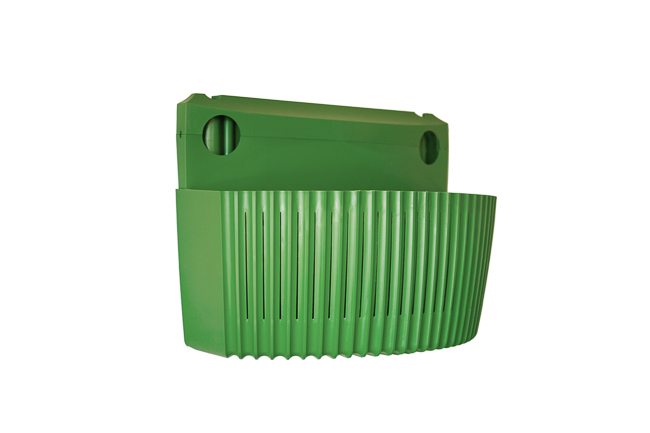 Woolly Pocket recently came out with a new living wall planter — a hard, vented reimagining of your original felt model. How’d that come about?

We’d noticed that we were selling most of our Woolly Pockets online to professionals. The retailers did okay, but we always felt they weren’t selling as many as they should be. What we realized was that, at a lot of garden center retailers, customers would walk right by them because they didn’t look like planters. They thought it would get soggy. But when they looked at it online, they saw how it worked. So we tried video displays in stores to help people understand it. It was a huge uphill battle.

Finally, we had aha moment a year and a half ago. We decided to make exactly the same thing, but out of a material the customer automatically associates with gardening. And we improved on it a little, overhauled the design. Our new, self-watering living wall planter is made out of molded, hard breathable recycled plastic. It’s just like a Woolly Pocket but, because the planter is separate from the hanging tank, one can easily plant the planter on the patio or potting table and then simply walk it over to the wall and hang it up. Much nicer than planting on a ladder. Way less work too.

The clips and channels make it easier to self-water, and it costs 40 percent less. Now, at gardening centers, it’s totally outselling the original model. We also have an all-white planter that kind of disappears on white sheet rock. So the plants look like they’re coming right out of the wall. That’s kind of cool. 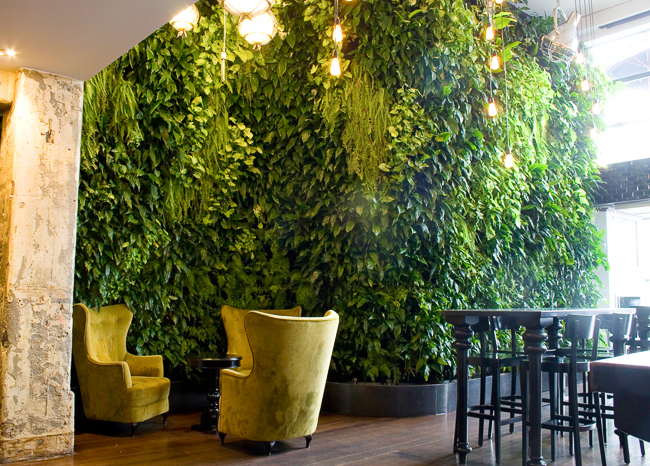 Between your home in Santa Monica and your event spaces, what kind of plants do you tend?

We have thousands of plants indoors and out! Succulents, ferns, agave, bromeliads, spider plants, and indoors, typical houseplants like Boston ferns, which look much more jungly and natural — the way they’re meant to be — when you put them into a vertical garden. It’s a wild effect. And they’re really affordable and divisible — cut them into four parts and they keep growing.

At Marvimon and SmogShoppe, we also have foxtail agave [that] are extremely robust in their Woolly Pockets. This year they all bloomed. It was spectacular. Some of them sport trunks over three inches thick!

My wife really has the green thumb — to this day I don’t have much of a green thumb. 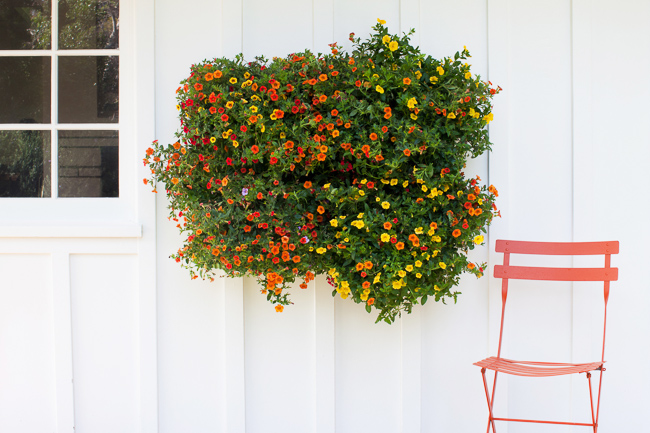 In addition to Boston ferns, what are some other plants that really come alive in Woolly Pockets?

Asparagus ferns, philodendron, succulents, grasses, and so many other plants. Pretty much any plant that thrives in a container will be beautiful in our living wall planters.

What’s the most interesting thing you’ve learned since you launched Woolly Pocket?

One of the most interesting things I’ve learned is that people are really afraid of plants — as much as they love them. They’re afraid they’re going to kill them. Plants don’t take nearly as much attention as a pet or a child, but because when a child needs help they’ll cry or ask, a pet will bark. They’ll let you know. Plants don’t really say anything. You really have to understand them and figure it out. You have to be a bit psychic. People don’t like it when things die in their lives.

There are very few plants in people’s homes. My kind of crackpot theory is that part of the reason we live in cities is that we’re afraid of the jungle, afraid of bringing in all the animals and bugs — and plants remind us of that. That’s really why cities aren’t green as they could be, because after a generation, you lose your understanding of plants because you’re not growing your own food. It’s not a real estate issue, it’s a psychological issue.

At garden centers the strongest new category is organic edibles. I know that 90 percent of the plants they sell are outdoor plants — even though almost everyone has indoor space. I’d love to see that change. When you bring a plant indoors, you treat it more like a pet or a family member. Once you bring it indoors, it requires your assistance. That’s the big hurdle a lot of people face.

If more big retailers have plants inside where customers are shopping, that would be really influential. If you went to a department store and they had a lot of plants indoors, showing what a living room might look like, people would start to get it. When people are around plants, they’re more relaxed. And in a shopping situation: more likely to buy something.

We’re learning ways to resolve that, make it as fun as possible for people to have plants in their lives. “Have fun with plants” is actually our motto. It’s printed along the sides of our product. That’s our big message. 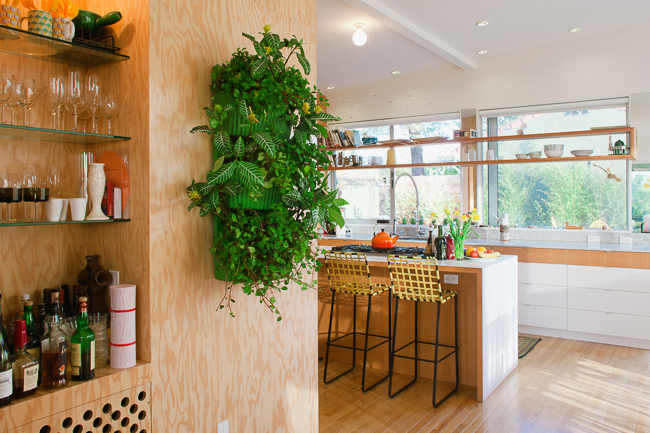 But what about the urban gardening movement?

What’s happening in the younger generation right now is making your own thing. Your own beer, knitting, growing your own food, learning how to make cheese. You see a lot of that in Brooklyn, Silverlake and Portland, sort of a neo-hippie thing. I don’t really know if it’s a trend or if it’s going to strike the masses. I wish it would.

For someone who wants to make the leap — what indoor plants do you recommend?

The usual suspects like pothos, spider plants, ferns and philodendron look so natural in living wall planters. They seem much happier grouped in a jungle-like setting versus all alone in a pot.