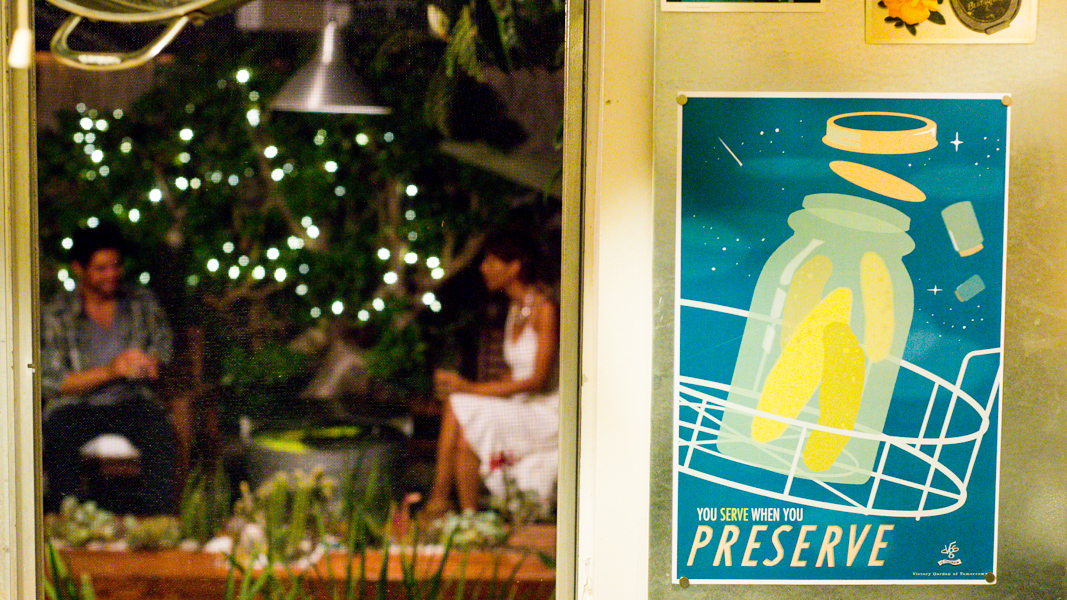 “I think the next Space Race is right in our backyard — our urban and suburban spaces need to be rediscovered and re-imagined,” says artist Joe Wirtheim, founder of the modern propaganda project Victory Garden of Tomorrow. He adds, “There can be power in small, ordinary places.”

If you listen closely, you’ll hear the sound of a gauntlet (shaped like a gardening glove) being thrown.

Since 2006, Joe has been creating posters that speak to — and challenge, and issue directives to — anyone inclined to coaxing something from the earth. Prints are done in Portland, Oregon, where VGoT is based; works include screenprints, posters, embroidered badges and floursack towels that urge us to “Grow food on an organic farm” and “Raise your chickens on kitchen scraps.” 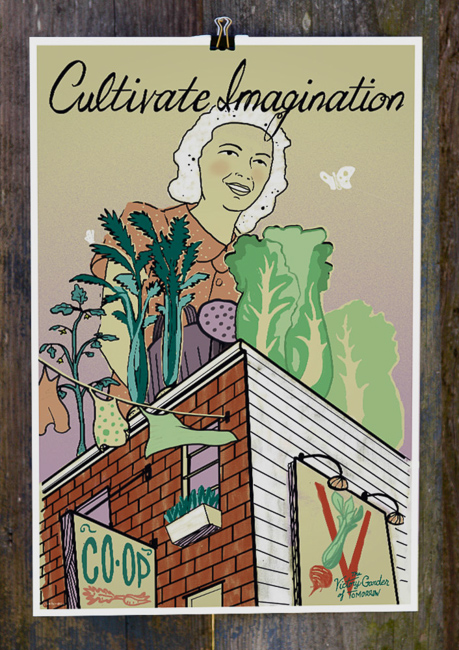 Joe’s work is gorgeously realized, optimistic, direct, with a high-stakes intensity. The images recall the iconic boldness of WPA-era posters, the competitive pep from the midcentury Space Race, and ads for those victory gardens of yesterday — that is, the World War II-era homesteads that sprouted both food and morale. (Eleanor Roosevelt was among the first Americans with a patriotic plot; Michael Pollan reminds us that the USDA was actually initially opposed to the movement.)

We first encountered Joe’s work during a trip to Progress, one of our favorite design stores in San Diego. We picked up the “You serve when you preserve” poster, with pickle jars adrift in an Atomic-Era space-scape, for our own homestead and have been obsessed with it ever since. The print is now posted on our kitchen magnet board between our stove and the window.

VGoT is a mind-expanding discovery. Over email, we caught up with the artist to talk urban farming, his influences and why we could use “some of that old can-do attitude.” 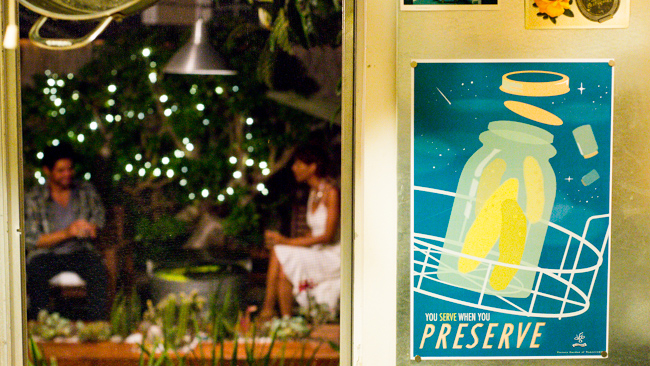 The view from our kitchen window, overlooking the garden. 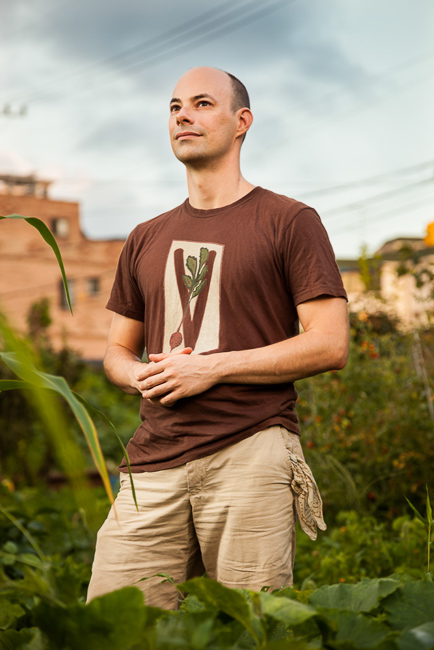 What inspired the look and feel of VGoT?

Really this has just been an organic, intuitive wandering for me — no grand scheme from the beginning. The “Victory Garden of Tomorrow” came from my research in midcentury and WPA-era posters. I was in design school and I was simply looking for graphic design ideas. I was looking at World’s Fair posters and victory garden wartime stuff, just looking at the type and illustration technique.

But by looking at these graphics and headlines, I saw a story that had not been heard in a long time — a story about American’s hard work through a period of uncertainty. They expressed confidence, ambition and urgency. It just resonated with me. 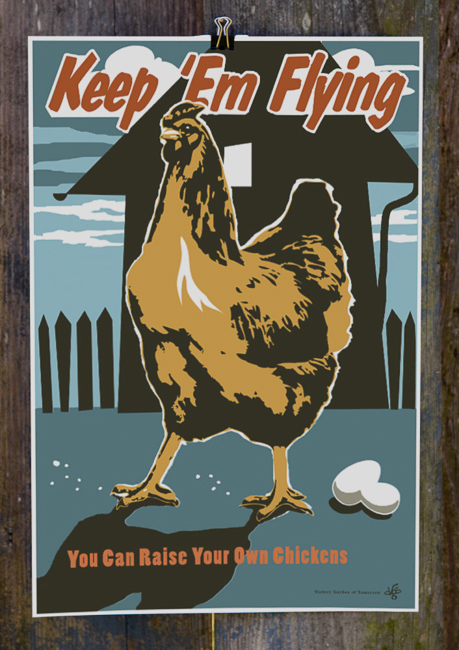 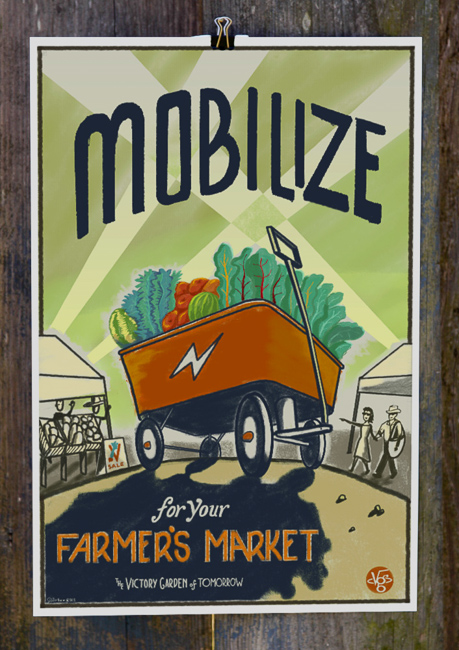 Who/what are your influences?

I’m a big fan of artists who take a stance politically or culturally. I can’t help but to admire the way Shepard Fairey has stood his ground and continues to make work that speaks its mind. My big source of food reform inspiration is from the author Michael Pollan. I especially like how he tells the history of our common foods, especially industrially produced ones. Makes me want to go back to the basics.

What motivated you in the beginning?

I was living in Columbus, Ohio, at the time I started making these posters, around 2006-2007. I just saw too many uninspired folks, too many sick people, too many isolated and lonely people in the city and suburbs. I felt that we could use some of that old can-do attitude. There has to be way we can once again feel connected to our identity and history as Americans, and use that connection to get excited and empowered about recreating (or renewing) our communities today. 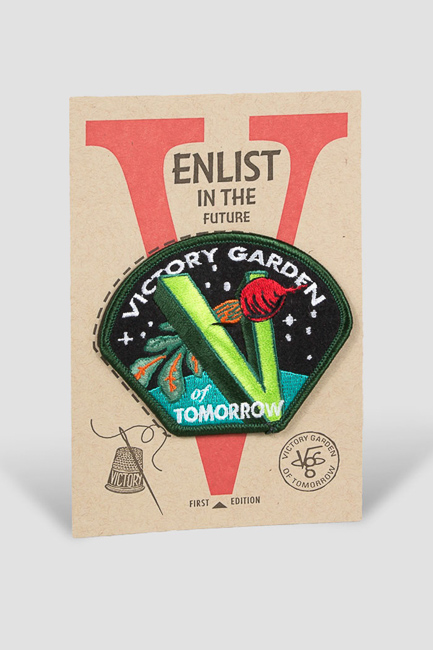 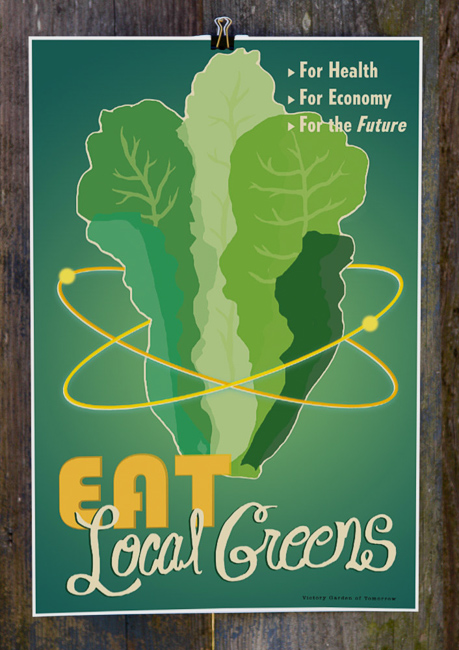 Your art is also inspired by the midcentury Space Race. What’s our generation’s equivalent to the Space Race?

I think the next Space Race is right in our backyard — our urban and suburban spaces need to be rediscovered and re-imagined. All over America, too many of our inner urban neighborhoods have been abandoned and allowed to decay. I’m a big believer in New Urbanism, mixed development, community place-making, diversity — it’s the perfect antidote to the isolation and cheap plastic of the conventional suburb.

I think about the exciting new techniques being employed in urban farming. All the developments in food culture. The Space Race is still on — only now it’s going to take the imaginations of artists, farmers, even children — as well as engineers and architects.

Do you garden at your place in Portland? What do you grow?

Normally I love to garden, but at this time I’m in the middle of a year abroad (and my first real excursion outside the U.S.). Currently I’m teaching in South Korea with my fiancé. Then in the late winter we’ll be in Central America. We plan on doing some farm volunteering while there. Honestly, it’s been amazing to discover the world again, but I do miss my garden tomatoes, greens and broccoli, not to mention those chickens back in Portland.

What kind of research do you do into propagandist art?

I look at a ton of stuff. Everything is an inspiration source. While I love the work of WPA American poster artists, I also enjoy the work of European modernists like Cassandre. The Russians have a famous body of graphic propaganda.

What is it about propaganda that gives it its emotional impact?

I love the strong, active voice of those WPA and war-era posters. It’s like an antidote to the passive persuasion of contemporary ads. One of my favorite posters simply reads, “Get Hot — Keep Moving”. That’s awesome. Of course, many these posters were made for the workplace, like munitions factories and the like. In those settings, giving commands was okay. 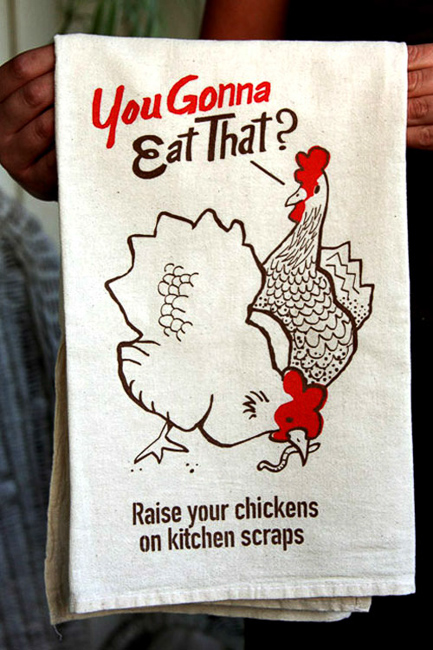 What have been some memorable reactions you’ve received?

Sometimes when I’m at a craft fair or something with my posters, people will think I’m selling reproductions of real vintage posters. ‘No,’ I say, ‘I made these recently.’ ‘Really?’ they say. [Me]: ‘Oh yes.’

I want to continue creating work that helps Americans understand their identity and history as Americans, while representing our aspirations and ideals. That’s the grand statement, but honestly, I just want to make things that are compelling to me. I also feel that as we engage in more of our life online, there is going to be a strong desire to engage in handcraft or gardening. We’ve already seen this in the DIY craft movements, but I think it’s just starting.

Also, I’m interested in making work for kids and parents. That’s going to be my next big push for next year. I want to start another design brand that focuses on the imaginations and craft of really young people. They’re becoming the most interesting people to me these days.