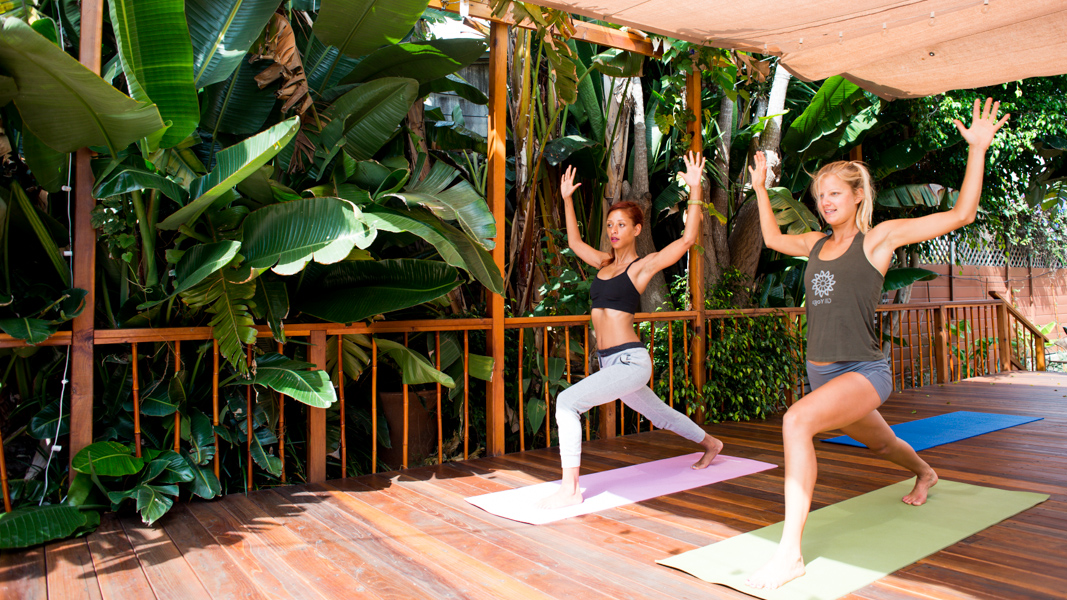 Crow, tree, butterfly, bird of paradise. Yoga pose or part of the landscape?

Here at the Yoga Yard, either category could apply. When we visited the studio last weekend for a vinyasa flow class held outdoors on its 1,000-square-foot redwood deck, a whole mob of vegetation coaxed out our ujjayi breaths: banana trees, bamboo, giant white birds of paradise (Strelitzia nicolai or svarga dvidasana, depending on what lane you’re in), morning glory and yucca.

Throw in the live acoustic music, and we were halfway to our next astral plane. Directions are easy enough, too. Just walk straight into Riffs Acoustic Music in La Jolla, CA, and make a left at the ukuleles. 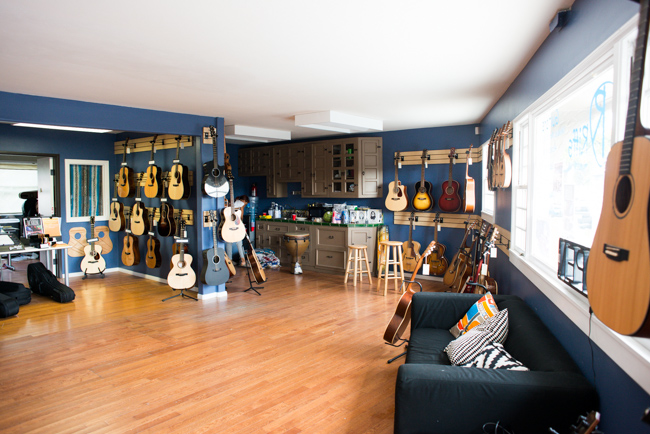 Riffs Acoustic Music is home to the Yoga Yard, which leads classes (ranging from yin to mixed-level vinyasa flow) in the garden behind the main building. 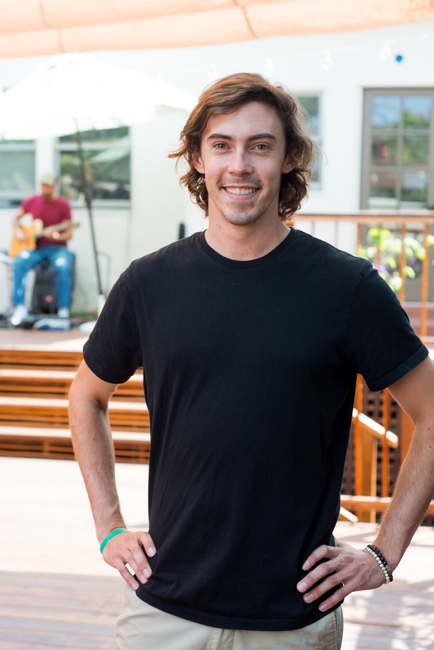 “Almost everybody’s first response when they first walk back there is, ‘Oh, wow, I didn’t know this was here.’ It’s kind of hidden, our secret little garden,” Steve told us on a recent visit. He opened Riffs last September in the Bird Rock neighborhood of La Jolla. (Down the street from our favorite coffee shop!) This is actually Riffs’ second location; Steve opened the first outpost with his father in his Park City, Utah, hometown. 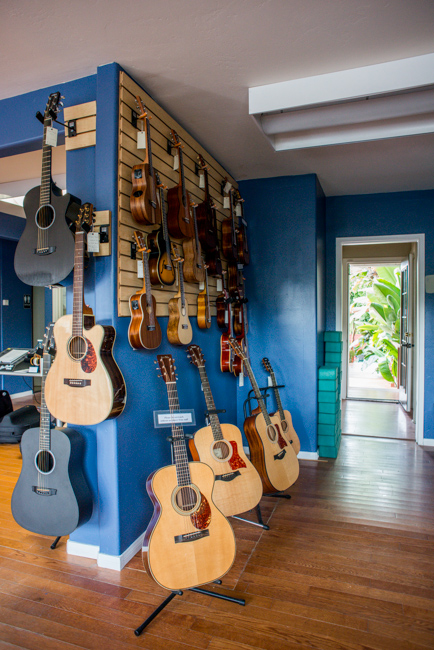 The shop specializes in acoustic guitars ranging from bang-for-your-buck models all the way up to high-end, handbuilt instruments by Santa Cruz, Huss & Dalton and Carmel. One satiny black guitar, a carbon fiber waterproof Rainsong, is ready-made for the wild outdoors; Steve recently played it for a stand-up paddle class. As in, he performed while on a board in the middle of Mission Bay. “I set up a chair on a board and I sat there and played,” he said. “It’s not the easiest set that I’ve ever played, but for the most part it’s fairly calm. If a wave comes through, I’ll have to check my balance. But for the most part, it’s fairly easy, and a lot of fun.”

Riffs also stocks mandolins, ukuleles (“our second-biggest seller”), accessories and even some jewelry. The idea to add yoga to the mix came during an exploratory visit here last year. 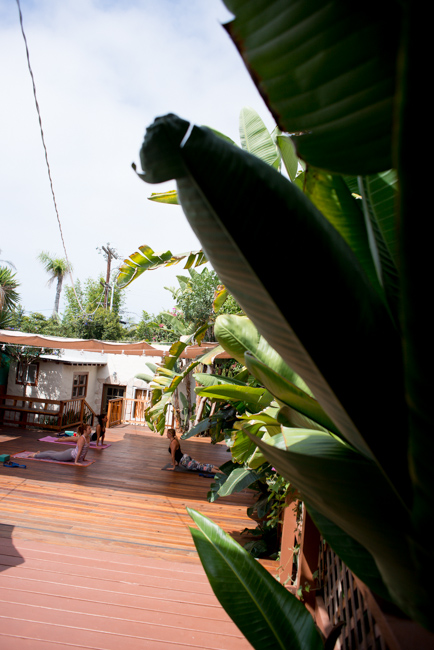 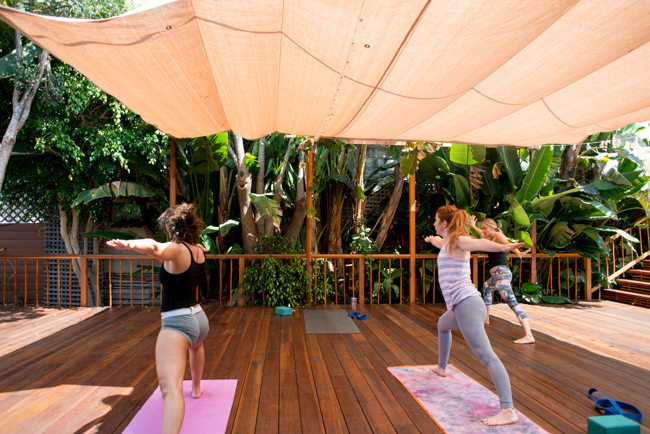 Yoga practitioners are greeted by ficus, banana and bird-of-paradise leaves. The plants, which were already growing here when Riffs arrived last year, are watered about twice a week. 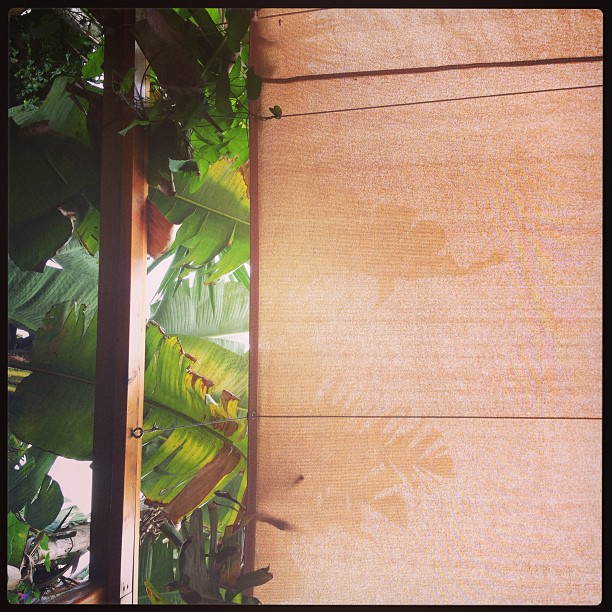 The view from our shavasana. Overhead, polytex linen sunshades are framed by broad, radiant leaves.

“When I saw this location and the backyard, I really liked it and [thought], ‘We could do something with it.’ And the amount of people I saw walking around with yoga mats…I’m into yoga myself, and had just taken a live music session back home. Once I put [yoga] out there, people just really took to it.”

The yoga started on “day one” (but “very, very experimental at first”) with just one weekly class on Sundays. Today the Yoga Yard offers a full daily lineup of classes, including hatha, yin, vinyasa and chakra series flow. Live music options range from bluegrass and flamenco to mellow singer-songwriter and hammered dulcimer. Last spring, the studio even held a class amid the famed ranunculus of the Flower Fields in Carlsbad. 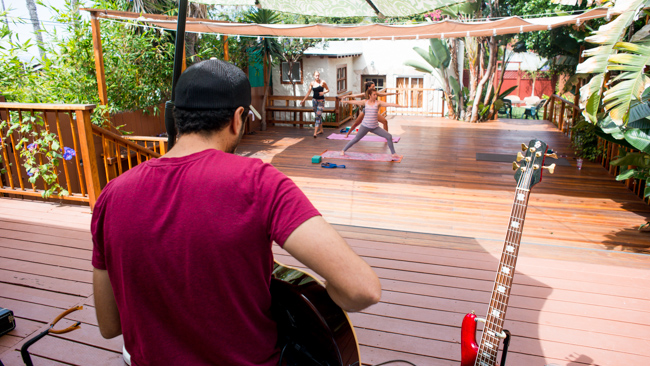 In case of inclement weather, there’s an indoor studio on site. 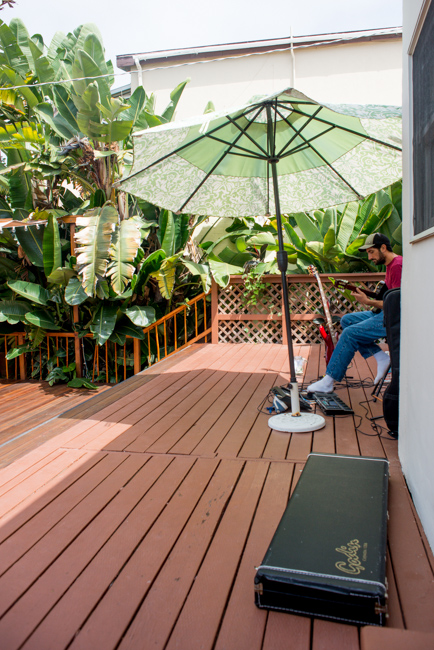 Tom Camillo, in town from L.A., plays both the bass and synth guitars from his looping station. His music is jazz-based with elements of groove, reggae and “some funk thrown in there,” he says.

During our 9 AM vinyasa flow, our instructor Gina Cat — a lissome, fresh-faced demi-goddess who also DJs — led us through a practice that opened our hips and introduced us to cactus pose (pictured in the topmost photo). Musician Tom Camillo played jazz standards like Coltrane’s “A Love Supreme” and Brubeck’s “Take 5.” Tom, who drives down from L.A. to play the weekend classes, strummed both the bass and synth guitars at a looping station. The sound: spacey, sustained and multilayered.

A purple morning glory, blooming against an electrical box, doubled as a focal point during a wobbly Warrior III. During swan dives, our arms brushed the leaves of birds of paradise. (Steve cautions that the flowers ooze forth a sticky nectar that must be cleaned off the deck.) All of this subtropical greenery, with the exception of the bamboo planted along the border with its burrito-shop neighbor, was already here when Riffs moved in last year. The plants just needed to be tamed and rearranged. 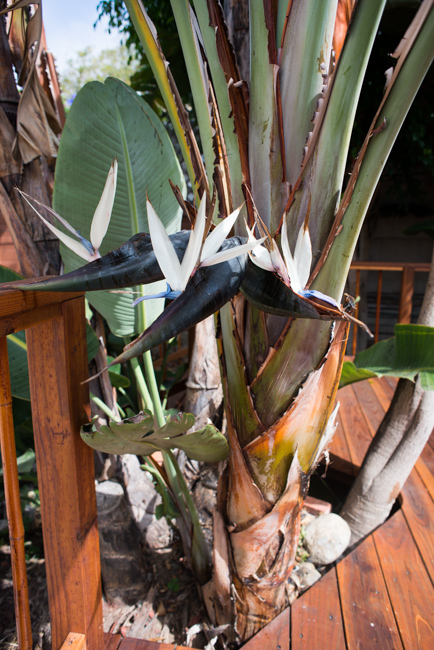 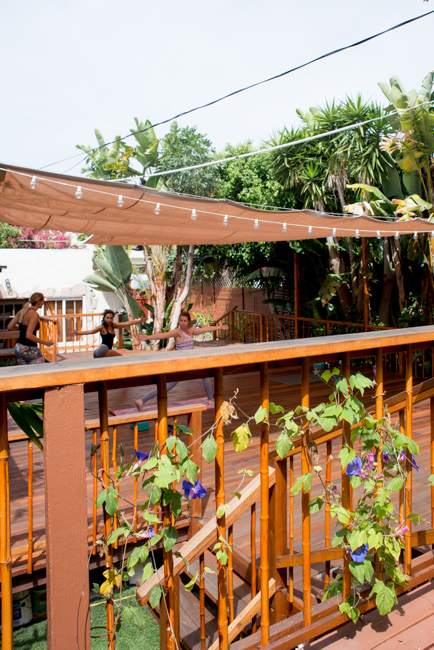 Vines of morning glory wind around the deck’s perimeter. 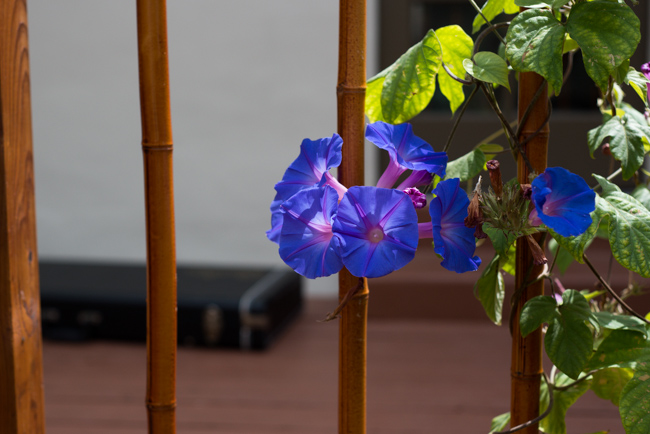 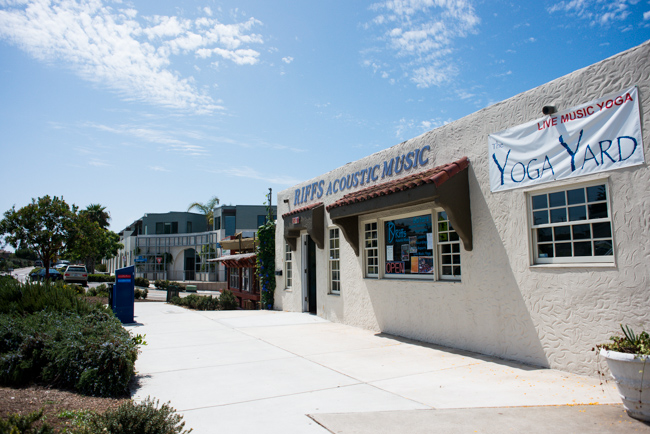 “When I first got here, it was pretty much it was all trees and bushes — kind of big mess,” he said as Tom Camillo’s reggae-tinged ode to Pink Floyd’s “Another Brick in the Wall” floated in from the 10:30 class. “There was a big plot of banana trees right in the middle. I found a guy off of Craigslist, a farmer; he came in and we uprooted [them]. He transported them down to his farm and replanted them there.” Steve adds a bit wistfully, “I’ve been trying to get a picture of them from him for the last six months.”

The manmade stage took teamwork of an even larger scale. The design of the Yoga Yard’s redwood deck involved, as these things often do in San Diego, a guy named Frondo.

Frondo, a La Jolla native who now lives in Mexico, assembled a team of surfer handymen to build the Yoga Yard’s cool-to-the-touch, richly colored deck that graciously skims and curves around its living landscape. Once that deck was done, said Steve, “everybody wanted to come here.”