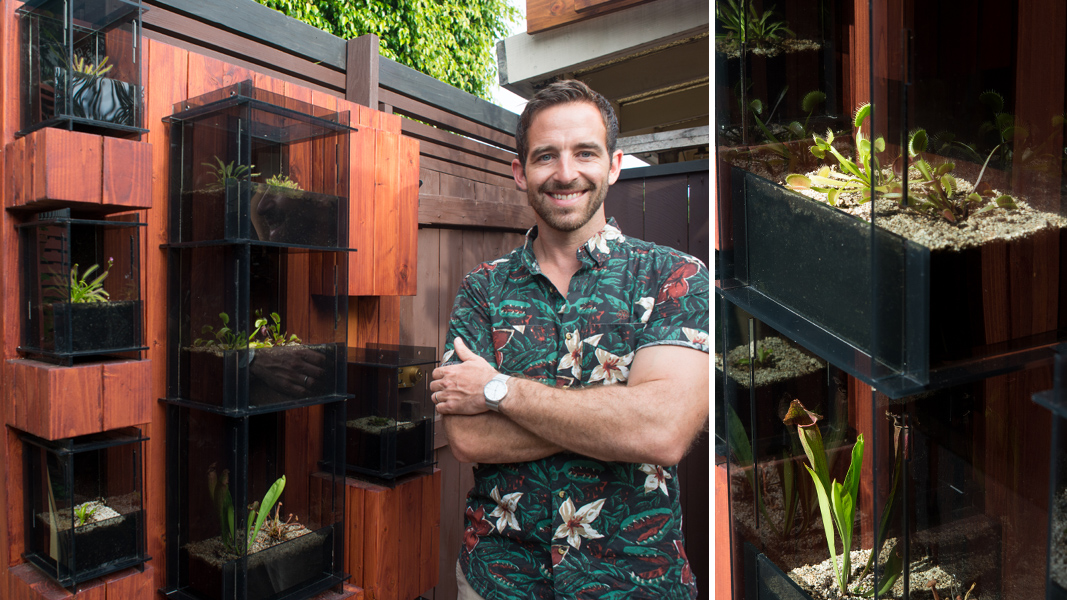 27 Aug Bogged Up: A Sleek Vertical Home for Our Carnivorous Plants

If there’s one plant — one group of plants — that equally amazes and weirds out visitors to our place, it’s our collection of carnivores.

We’ve written about them before: how some entrap their prey passively with intoxicating nectar and slippery surfaces, others with chomping showmanship,  and others with gooey liquid reminiscent of fly paper.

Last year we installed a custom habitat in a corner of our garden for our tropical carnivorous plants (Nepenthes) that also doubles as an outdoor shower. And then there was the very first time we grew Venus flytraps back in 2009, along with sundews and American pitchers. Back then, we made bog garden terrariums out of large glass vases, and the plants did well in them for a couple of seasons.

The latter three carnivorous plants covet consistently damp, nutrient-poor soil, a fair amount of sun and high humidity, making them tricky to care for. Not to mention, they need bugs to survive! Meaning, yes — we fed captured live houseflies to our flytraps and sundews the same way you’d feed a mouse to a snake. And yes, we realize this practice might seem creepy as phlox. 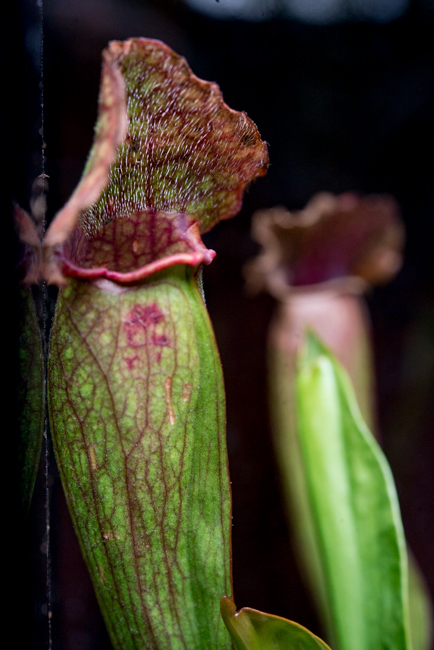 So vampy. This “Fancy Sarracenia Hybrid” casually leans against the acrylic wall awaiting a wasp to swallow. American pitcher plants (Sarracenia) lure insects into the depths of their pitchers by the scent of their nectar and the vein patterns of their leaves. There are nectar trails on the inside of the lid which intoxicate sipping insects, causing them to slip and fall into the pitcher. They are then digested by an enzymatic cocktail. Talk about a hangover! 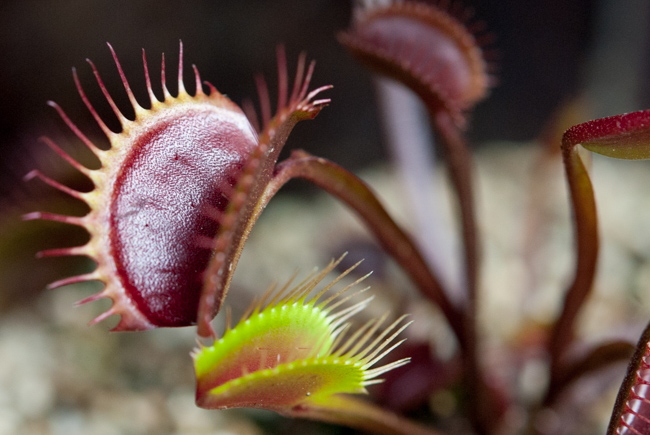 Above, the leathery traps of this Dionaea muscipula ‘Green Dragon.’ The plant produces nectar inside the trap to attract prey, usually flies but also ants and other insects. If an insect is unlucky enough to bump into one or two of the trigger hairs inside the trap twice within about 20 seconds, the trap closes instantaneously around the insect…but that’s not the end! The insect will continue to trigger the trap to close further as it tries to escape. We’ve witnessed a fly survive two days with one leg sticking out of the trap before the trap finally digested it. 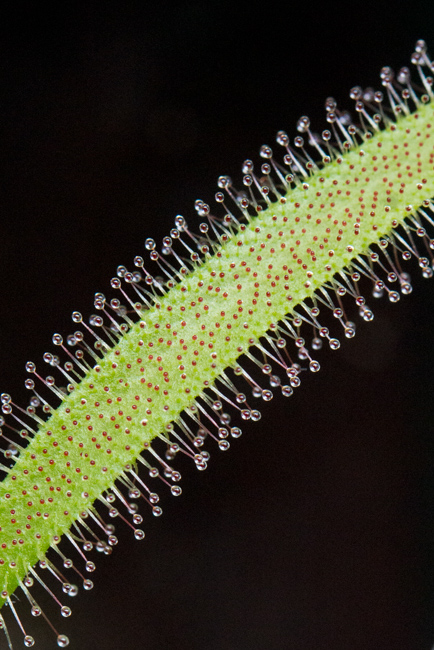 Sundews (genus: Drosera) wear their humidity on their leaves. These dewy beads look lovely and innocent enough, but they contain a gluey acid that grabs onto insects and digests them alive.

This year (after reading a very inspirational book — more on that in a moment) we decided to restart our collection of non-tropical carnivores: flytraps, American pitchers and sundews.

We also decided these plants needed a sexy new home. So, intent on outdoing our earlier terrarium design, Ryan took matters in his own hands and designed a sleek, slightly menacing, Darth Vader-esque set of habitats made from tinted grey acrylic. This required putting his laser cutting skills to the test (by way of the laser cutters at MakerPlace, a membership-based communal workshop). The design goal: to create a modern acrylic bog terrarium that could sit atop a table or hang from an overhead fixture — while fitting in with our garden’s aesthetic. The horticultural goal: to foster a higher-humidity environment that will mimic that plants’ boggy native habitat.

After designing and cutting six of the terrariums (in four prototype designs), Ryan made a large rolling corner display out of construction-grade douglas fir (studs) to place the terrariums vertically against a west facing wall in our garden. 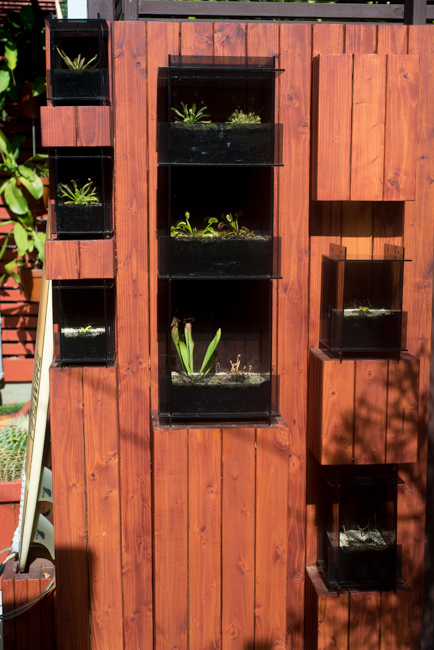 Our vertical bog consists of one three-high terrarium and five individual ones. The entire display faces due west, catching direct sun for about half the day. This is the best we can do for these sun-loving plants, given what real estate we have left in our garden! They’re thriving, but we have noticed that our sundews and flytraps are less red than they were upon arrival due to reduced sun exposure. 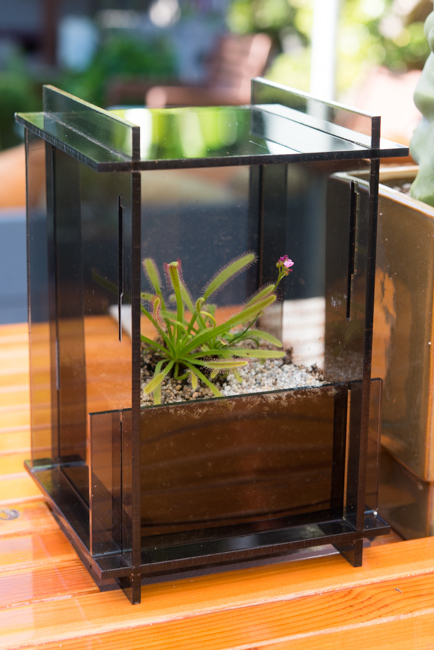 Individual habitats can also be moved to our table tops. This terrarium, the smallest in the collection, measures 6 inches wide by 6 inches deep by 9 inches tall. 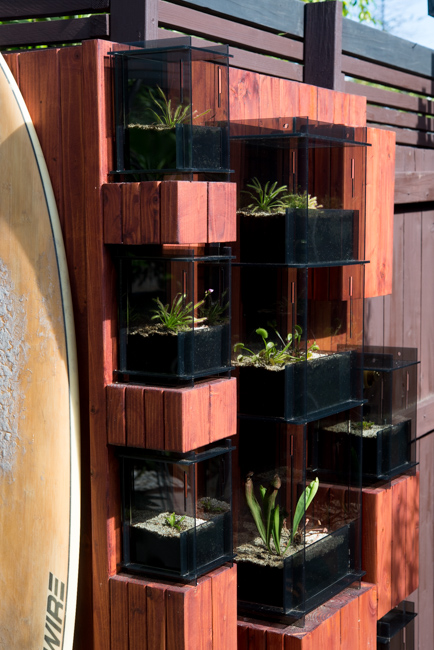 Ryan designed the terrariums with open faces for venting, but they are still enclosed enough to trap some humidity from the moist soil heated by the sun. Any terrarium for carnivorous plants should have at least one side partially open for venting, otherwise you’ll cook the plants. 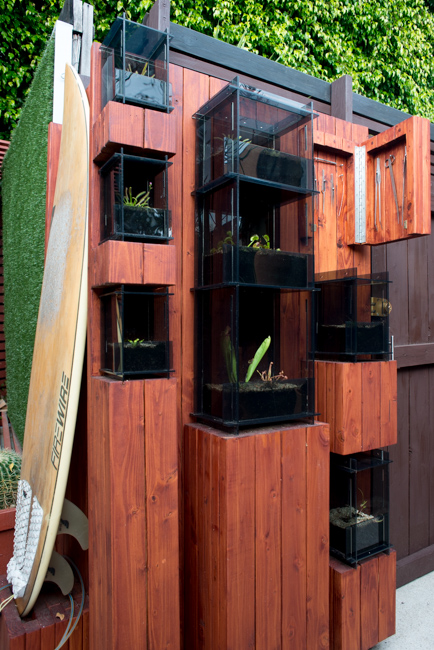 The carnivore display also doubles as a surf board display and is wheel-able. 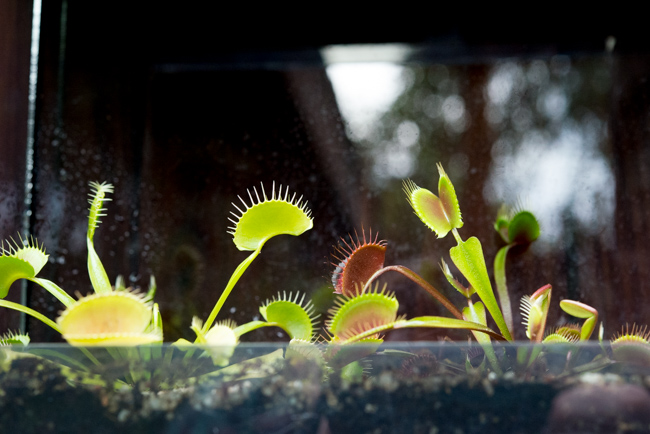 The battle of two Dionaea muscipula: ‘King Henry’ (left) versus a ‘Green Dragon.’

Then it was time again to shop for carnivores. Instead of sourcing our plants from Home Depot (which sometimes sells flytraps, American pitchers and sundews during the growing season), we put in a few orders to the legendary Sebastopol, CA-based California Carnivores, the largest retail carnivorous plant nursery in the U.S., co-operated by Peter D’Amato — author of the landmark Savage Garden, the book that inspired us this year — and by Damon Collingsworth.

We highly recommend the flora from this nursery, and Savage Garden too, which is written with a showmanship that does justice to these meat-loving marvels. “[I]t is usually much easier to introduce the doomed insect into the maw of a Venus flytrap by means of forceps, because you have to stimulate the trigger hairs within the trap; you cannot simply drop the fly in,” D’Amato writes on page 30. “Often the fly escapes just as the trap closes, which is as cruel to the plant as stealing candy from a baby.”

Major motivation for creating a space that not only houses but celebrates carnivores’ ferocious appeal. Continue with us on our bog-in-a-box adventure, below! 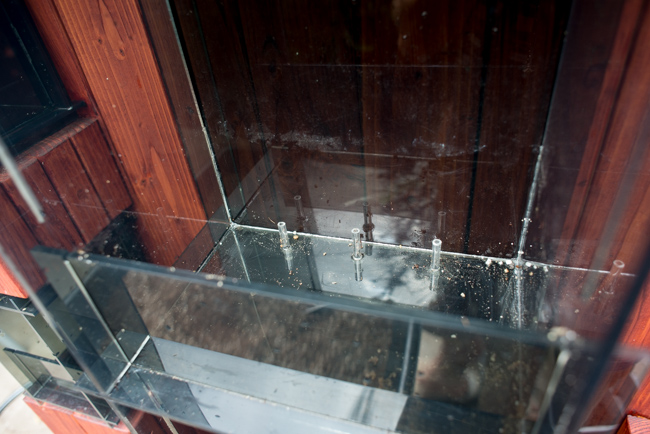 Most non-tropical carnivorous plants thrive in bogs. To create a bog-like habitat, we raised the drainholes by 1-1/2 inches with acrylic tubing. This creates a 1-1/2 inch maximum water level at the bottom of each terrarium. This is important for maintaining moist but not flooded soil. 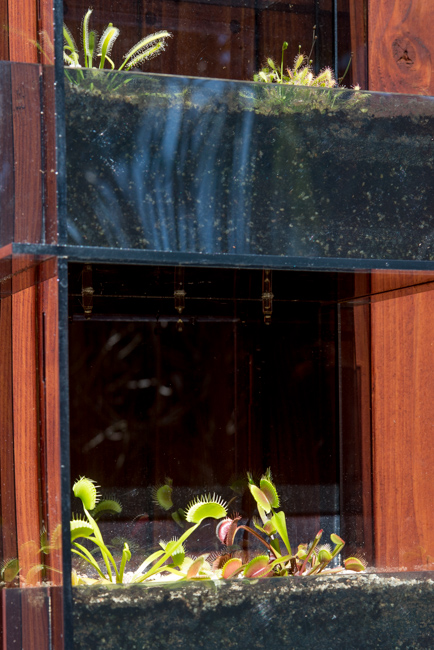 When we water the sundews (top), excess water above 1-1/2 inches drains down to the flytrap terrarium. 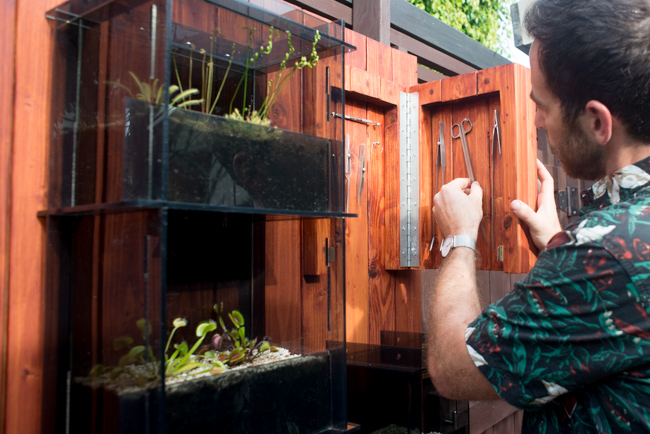 A carnivorous plant habitat would not be complete without a built-in cabinet for grooming and feeding tools. 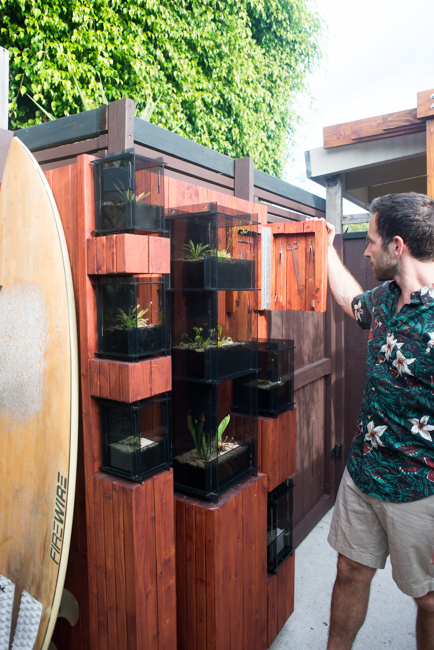 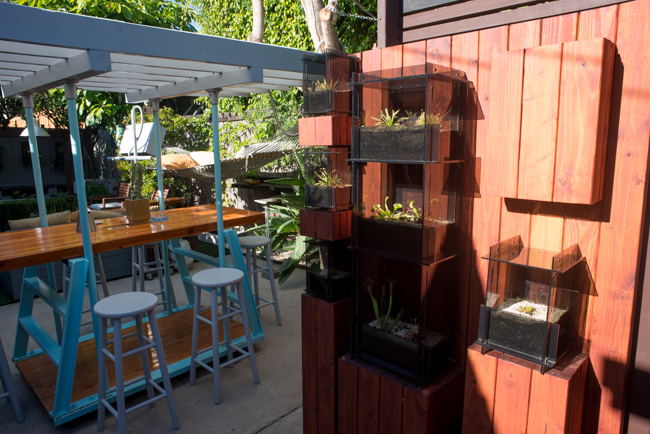 We normally keep the cabinet closed. So we don’t, you know, completely creep out our guests. 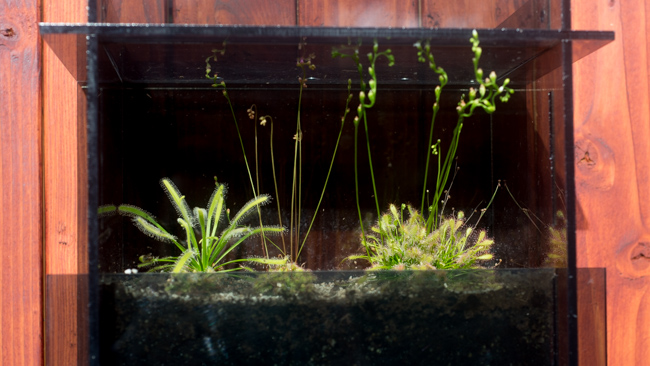 Flowers should be pruned off to promote robust growth of the plant. We’re only growing sundews here that do not reach heights greater than a few inches. 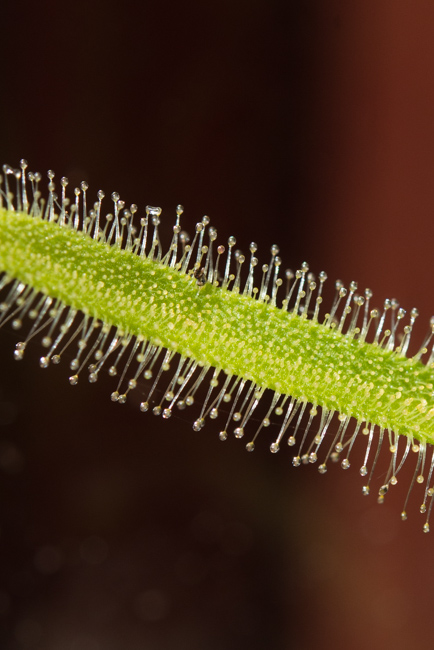 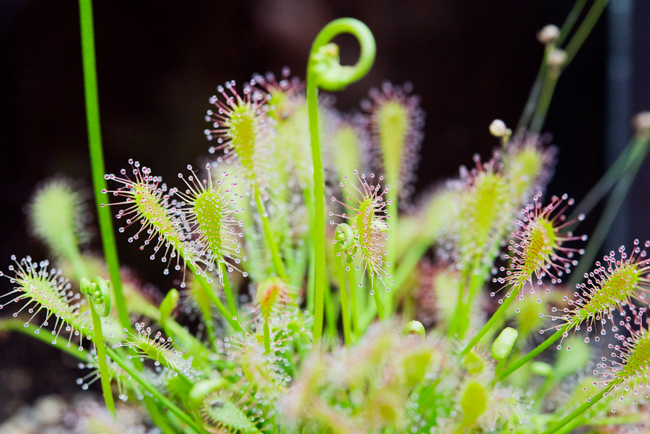 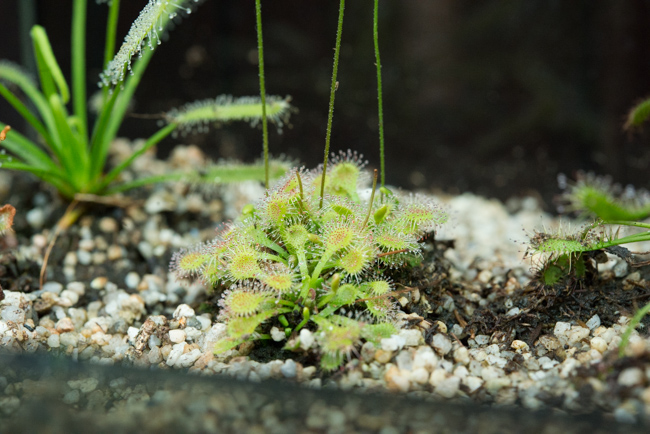 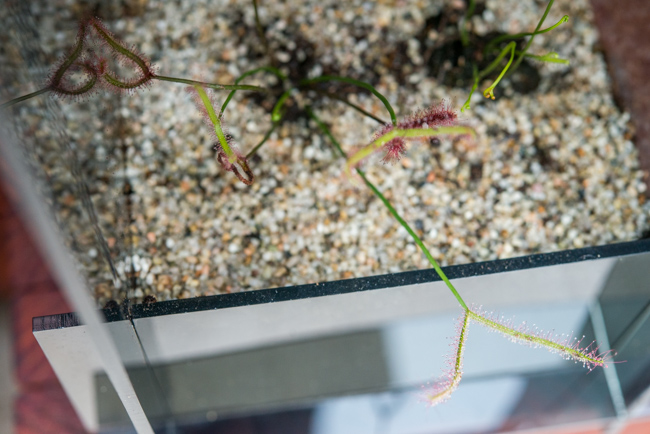 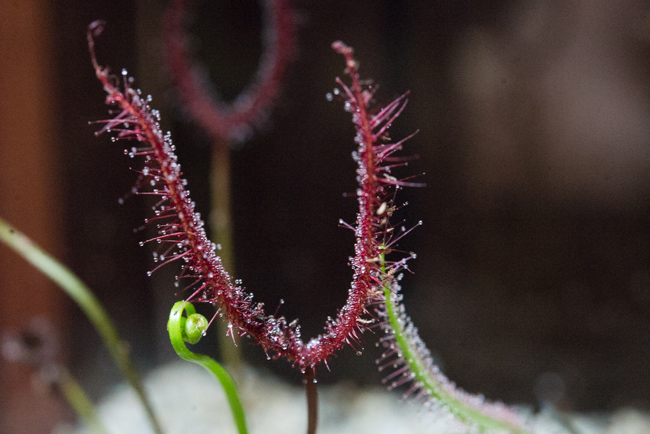 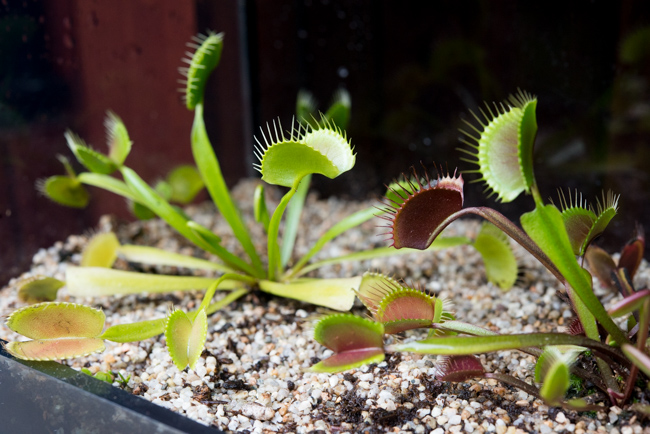 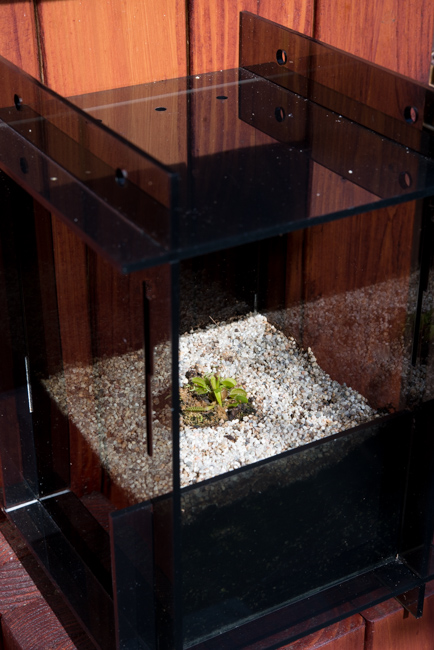 We have big hopes for the smallest carnivorous plant in our collection. This Dionaea muscipula ‘B52,’ if we play our cards right, will eventually be the largest, producing traps up to 2 inches long. Say it with us: Feed me, Seymour! 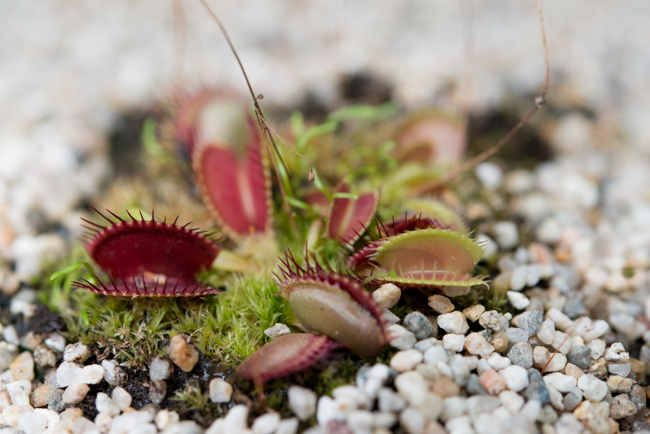 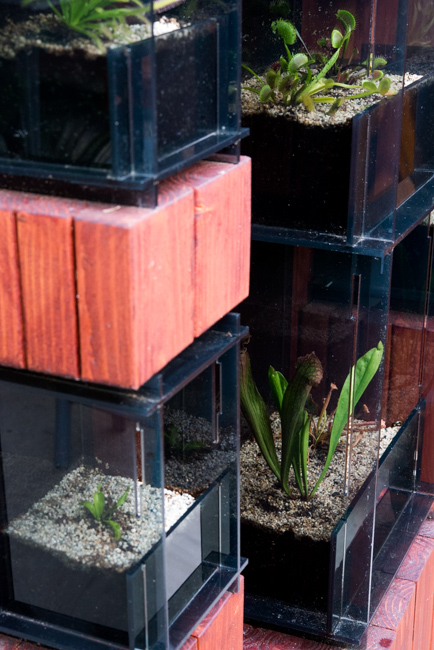 We’re growing our “fancy Sarracenia hybrid” in the lowest and tallest unit (12 inches) of the triplex terrarium. 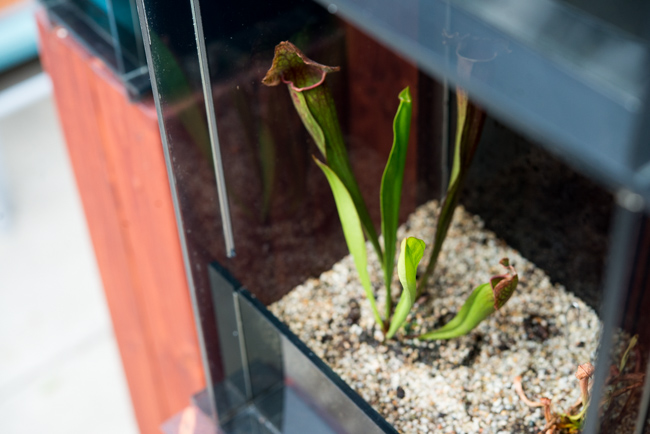 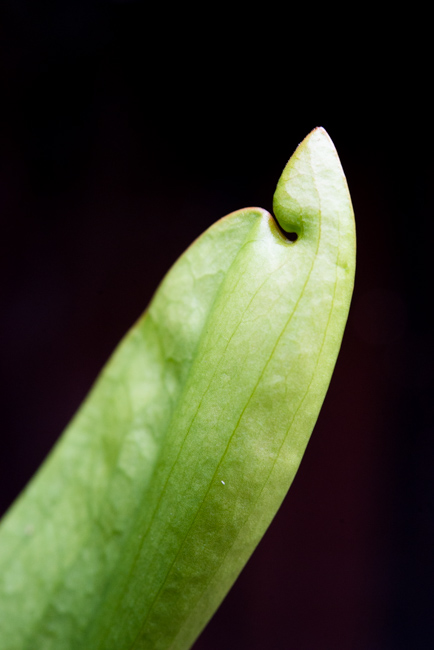 New pitchers have been emerging on the Sarracenias. We must be doing something right!