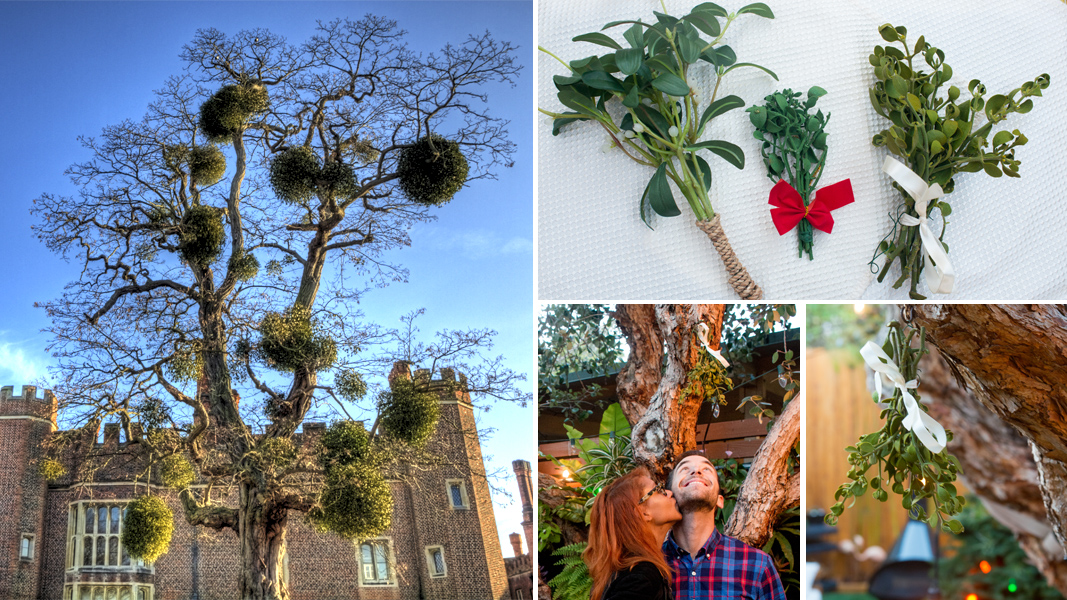 23 Dec Kiss and Tell: What You Might Not Know About Mistletoe

In this season of highly electrified plants — when any branch that can hold a string of lights gets lit — mistletoe generates its own spark. No batteries required.

Placed above a doorway, a sprig of mistletoe is the official kiss-inducer of Christmastime. But out in the wild, plants of the order Santalales are infamous for another reason: They are clingy hemiparasites that grow from the branches of trees and shrubs, drawing water and nutrients from the host plant. (If you do end up underneath the mistletoe next to a person of interest…we recommend opening with this exact line.) But don’t pull out the cherry picker yet; a recent study shows that mistletoe could play a key role in maintaining the health of forest ecosystems.

European mistletoe (Viscum album) is one of the better-known species. It’s a striking sight — leafy orbs of evergreen V. album encaged high up in bare branches of hickory, apple, birch, black gum and oak trees across Europe, Western Asia and the United States. These smoochy moochers have small, textured, elliptical leaves, and striking whitish berries, and, like other species, a reputation for being poisonous to pets.

The plant is only hemiparasitic because it’s photosynthetic and able to produce some of its own food — as opposed to a holoparasite. 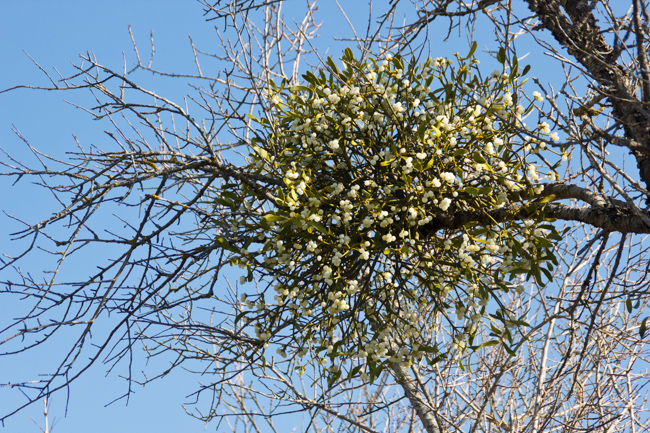 European mistletoe, Viscum album, is a photogenic though hemiparasitic plant that pulls water and nutrients from its host plants. Photo by Sarah Gregg/Flickr. 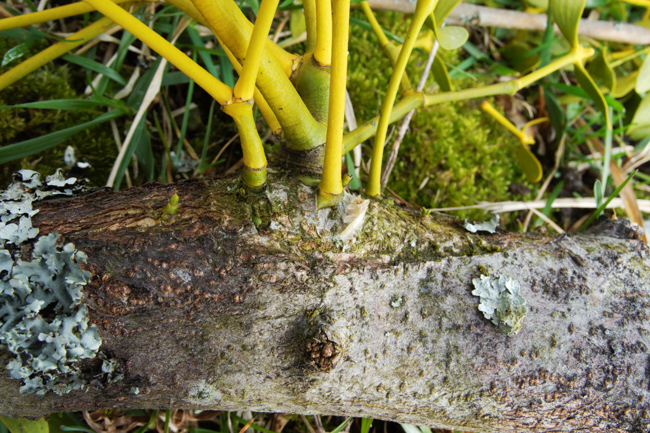 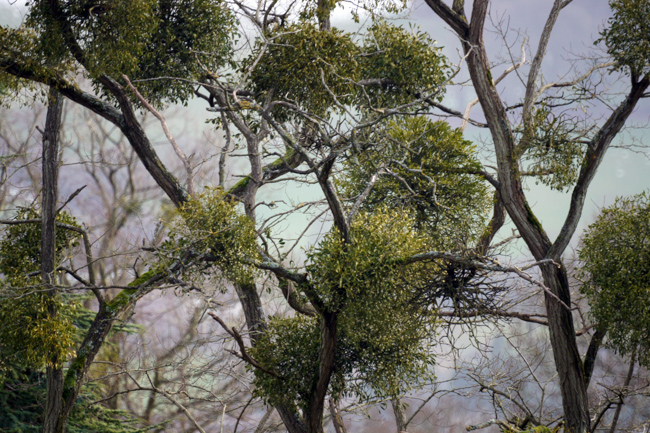 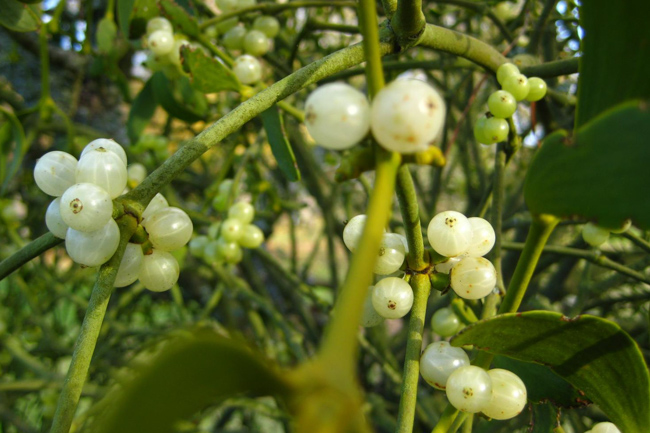 Regarding the origin of the kissing connection, mistletoe was linked to fertility and kissing by both the ancient Greeks and Celtic druids. In Victorian England, shrubby “kissing balls” were dressed up and hung with the intention of helping girls get married. Norse tradition also dictated laying down weapons while standing under certain plants, like this one. So pucker up, call a truce — just make sure you’re not doing it under the flashy sprigs of holly that shops sometimes market as “mistletoe.”

Out here this year, we picked up three sprigs: one fresh (from Adelaide’s La Jolla, $5 for a large bunch), one fake (also from Adelaide’s, for $7.50) and a real one that had been painted within an inch of its life (from Trader Joe’s, $1.99). Then we experimented with placement… 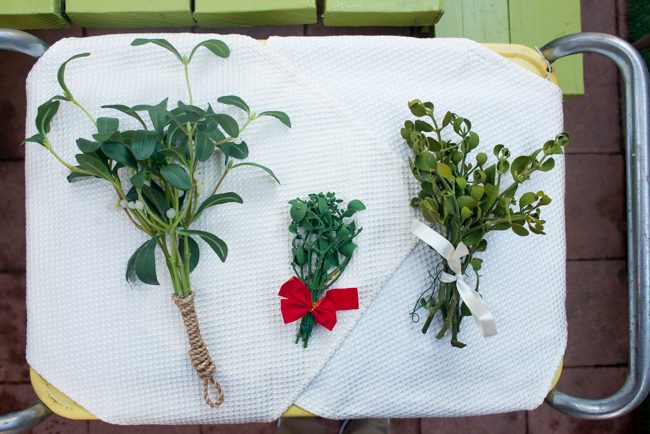 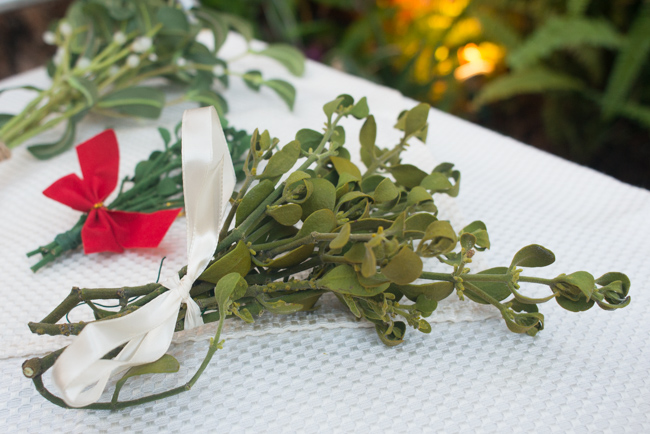 The real-deal. We purchased our mistletoe bunch from a local florist. Most florists carry mistletoe this time of year. 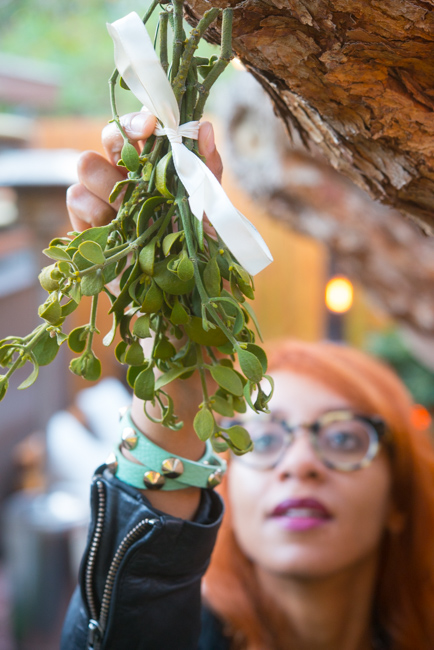 Using a small hook screwed into the bark of our guava tree, we attached a bunch of fresh mistletoe with a little bit of paddle wire. 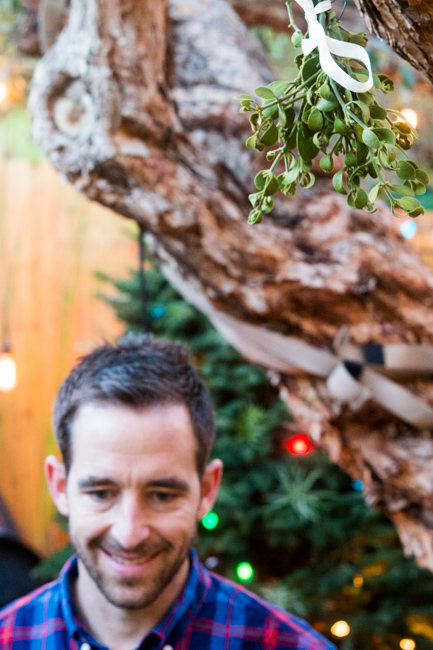 I spot a potential target… 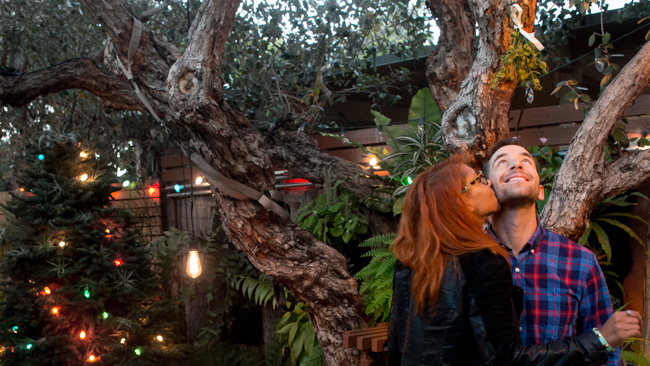 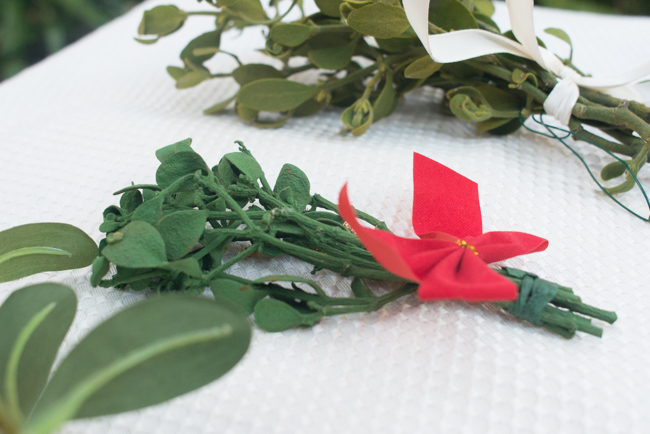 We weren’t impressed with this mistletoe and its odd green paint job, and how it was marketed as real mistletoe. Feels a bit fake-real to us. 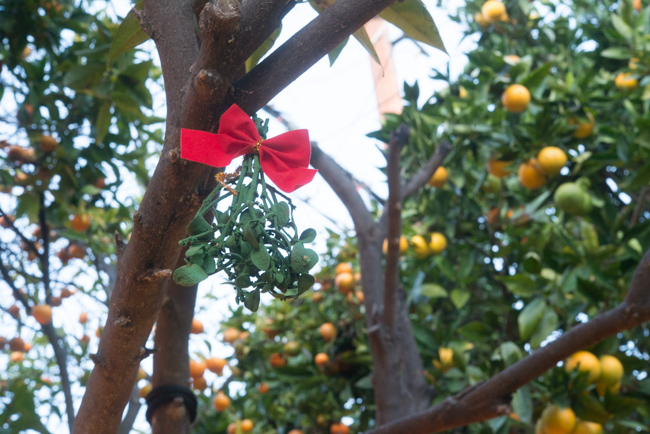 We initially placed the painted mistletoe slightly out of the spotlight, on the tangerine tree… 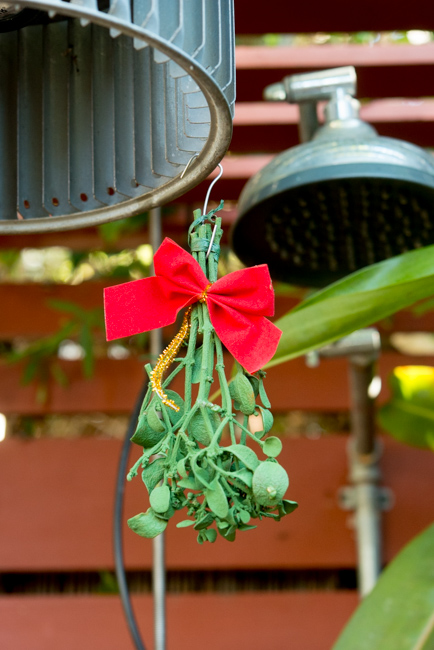 …Then relocated it to the outdoor shower/Nepenthes area that was calling out for some holiday flair. 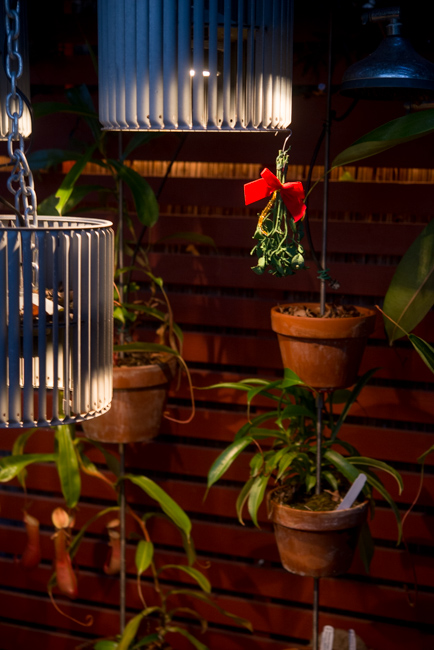 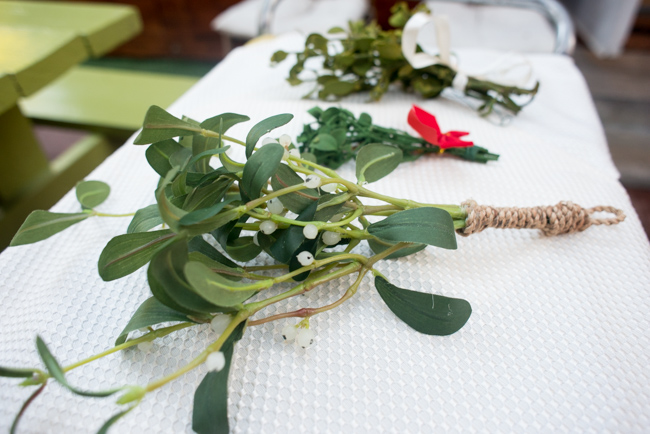 We give the fake mistletoe points for its berries and the color is a lot closer to the real mistletoe. 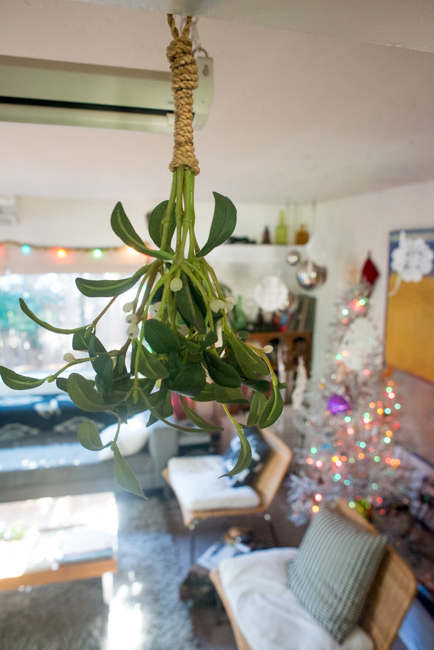 We brought the fake one inside, where, alongside the aluminum tree and kitschy paper snowflakes, it kind of just blends. 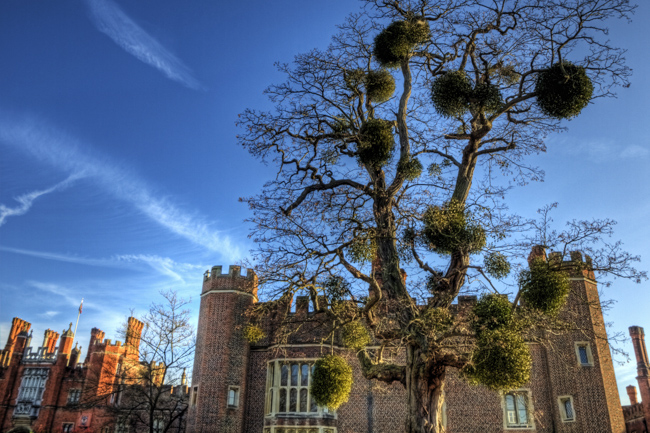 Happy Holidays, Merry Christmas and best wishes for the New Year! Thank you for all of your fun and informative comments, notes and feedback these past 12 months. Just like some blobs of mistletoe, we’re off to mooch and smooch with friends and family — and will be back in January. See you in ’15!