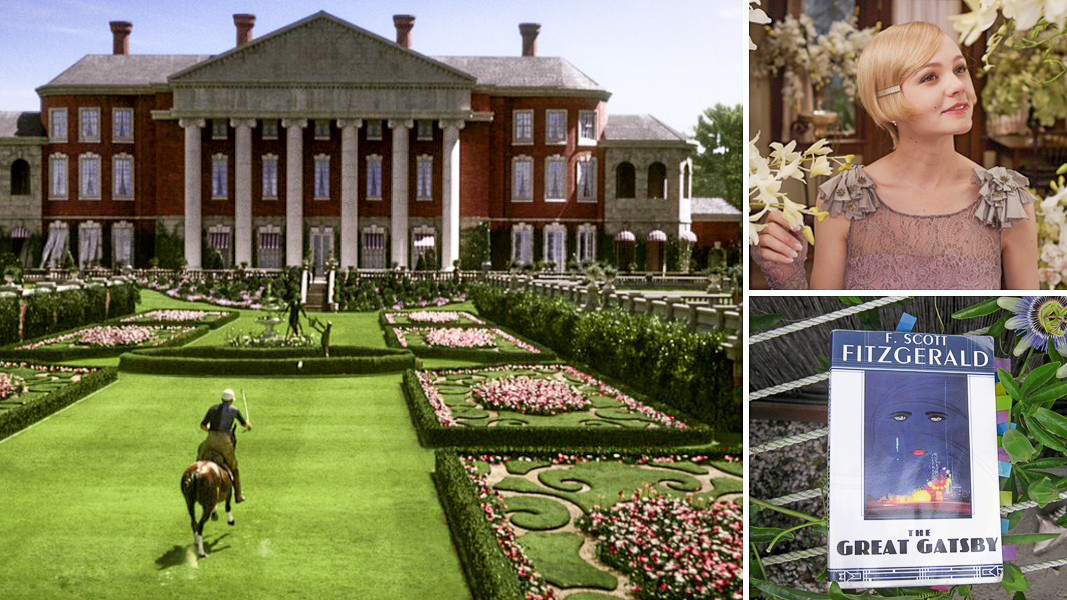 10 May Orchid Girls and That Infamous Emerald Lawn: Inside the Gardens of ‘The Great Gatsby’

“In his blue gardens men and girls came and went like moths among the whisperings and the champagne and the stars,” F. Scott Fitzgerald writes at the top of chapter three of his immortal, absurdly re-readable The Great Gatsby. Narrator Nick Carraway is describing the home of Jay Gatsby, of course.

Baz Luhrmann’s go at the classic comes out in theaters today. Like many fans of the book, C’s feelings about the movie are mixed. On the one hand, Leonardo DiCaprio is wildly miscast as Jay Gatsby; on the other, C always has always had a soft spot for jazzy vulgarity — especially the kind portrayed by Luhrmann. And hell, by Fitzgerald too.

A lot is made of its symbolic colors (green light, anyone?) but many of the plants that bloom and fade throughout The Great Gatsby also give life to the story’s easy-come-easy-go themes of decadence and doomed passion.

For starters, there’s Daisy Buchanan and all that the name suggests: a tender, ostensibly unstained exterior surrounding a very yellow (cowardly) heart. When she arrives at the house of Nick Carraway (not too far off from the herb caraway, which, in the Victorian language of flowers ironically means “infidelity prevented”) for her first private meeting with Gatsby since their reunion, Gatsby has brought in a greenhouse of flowers. In the movie, these flowers are white orchids, a nod to Nick’s description of his cousin:

For Daisy was young and her artificial world was redolent of orchids and pleasant, cheerful snobbery and orchestras which set the rhythm of the year, summing up the sadness and suggestiveness of life in new tunes.

In the novel, much is made of lawns too, that easy indicator of status and ambition:

We both looked at the grass — there was a sharp line where my ragged lawn ended and the darker, well-kept expanse of his began. I suspected that he meant my grass.

And what Gatsby fan can forget the image of the chauffer in the robin’s-egg blue uniform crossing Nick’s lawn to deliver a party invitation from his complicated neighbor? In fact, the word “lawn” appears 22 times over 180 pages, including on the final, heartbreaking one.

In the new film, Gatsby’s manse is crowned with CGI turrets and was inspired by Old Westbury Gardens, right down to the ivy-covered facade and the alleé of European linden. The Long Island property is open to the public and is also landscaped with veronica, asters, primroses and dahlias that were almost certainly trampled by drunken flappers. 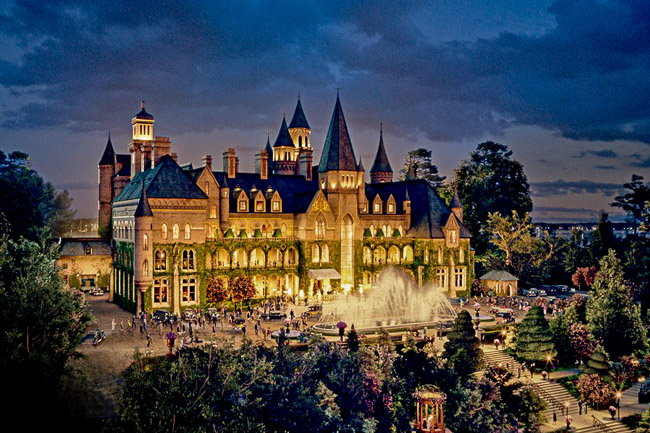 And oh, the flappers! They also get the soft-petal treatment by Fitzerald:

“Perhaps you know that lady,” Gatsby indicated a gorgeous, scarcely human orchid of a woman who sat in state under a white-plum tree. Tom and Daisy stared, with that particularly unreal feeling that accompanies the recognition of a hitherto ghostly celebrity of the movies.

“The man bending over her is her director.”

As often as plants represent money and vitality, they also suggest degradation and death — from the “grotesque gardens” of the valley of ashes to the “desolate path of fruit rinds and discarded favors and crushed flowers.” At the beginning of the novel, trees wear “great bursts of leaves” leading to “that familiar conviction that life was beginning over again with the summer” and at the end of the story, “the blue smoke of brittle leaves in the air” finally compels Nick to leave West Egg. The life cycle of plants seems to echo the boom and bust of Gatsby’s own world.

Same could be said about the author. After living among the Phoenix palms on the French Riviera and the maples of New York, Fitzgerald moved into LA’s Garden of Allah in the late 1930s, near the end of his life. He was writing screenplays for MGM inside this glam bungalow complex on Sunset; Dorothy Parker, Gloria Stuart and Ernest Hemmingway were also residents. (Now it’s a strip mall, and home to a Chase Bank.)

By this point, Scott was already estranged from his wife Zelda, who would spend the rest of her life in various mental institutions, tormented by hallucinations that might have started at a flower market where she thought the blossoms were speaking to her. The wonderful Garden History Girl blog suggests that it was Alabama-raised Zelda, and not her husband, who provided some of the more genteel floral imagery of The Great Gatsby, including this seductive gem: “With enchanting murmurs Daisy admired […] the gardens, the sparkling odor of jonquils and the frothy odor of hawthorn and plum blossoms and the pale gold odor of kiss-me-at-the-gate.”

A beautiful start to a party that, like all others, must come to an end.

Zelda Fitzgerald as a teenager in Montgomery, Alabama, where she was born and raised.

Films, Literature, The Great Gatsby, What We Read